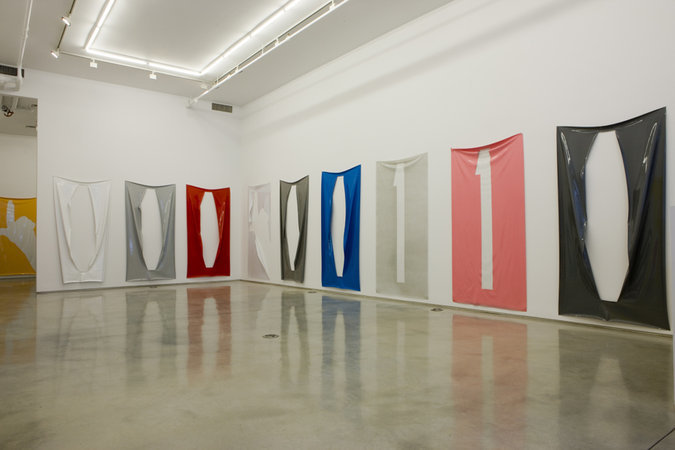 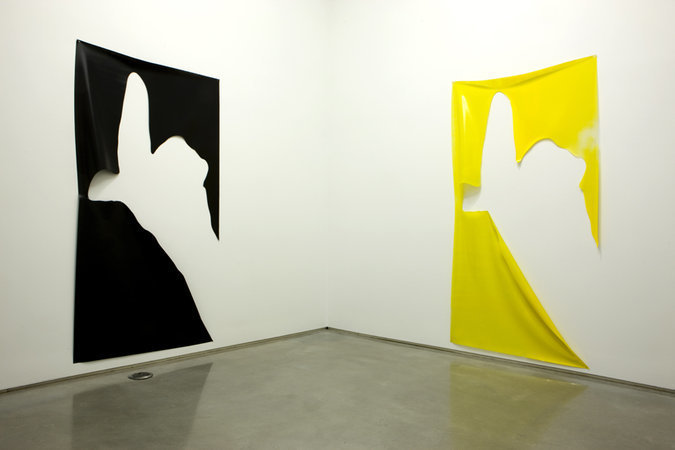 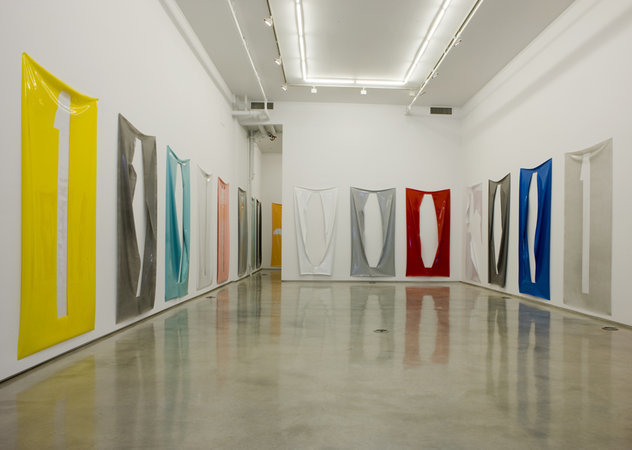 Team is pleased to present an exhibition of new paintings by Davis Rhodes. The exhibition will run from the 3rd of September through the 3rd of October 2009. Team Gallery is located at 83 Grand Street, between Wooster and Greene, on the ground floor.

Davis Rhodes’ paintings — one would be hard pressed to call them anything else — take as their support foamcore panels, mylar, vinyl sheeting and other materials of the “lesser-than” variety. Rhodes coats these materials with spray-paint, sometimes using objects or tape as interference, in order to create installations that are in-between painting, sculpture and theater. The artist responds to exhibition locations using his artworks, always produced in an absurd abundance, to stage settings that can be either sparsely elegant or noisily overloaded. The manner in which his showings are formed can either produce value for the individual works or complicate their status as autonomous objects.

Works are oftentimes grouped or layered so parts of one composition are obscured by other pieces. Standing panels confront viewers forcing a physical engagement — a courtship of first look, second look; an admiration of beauty followed by a glare of criticality. While the foamcore seems flimsy from certain angles, from others it can appear cold, fabricated, metallic. Rhodes’ panels, usually of very human proportions, bend under the weight of the paint, adopting awkward, not entirely-rigid stances. These standing pieces are shown alongside works that suggest more traditional paintings, but Rhodes’ panels are stapled to the wall rather than hung.

Rhodes blends color-field and hard-edge painting with post-minimalist positions in order to explore the relationships between private studio practice and public performance. He takes the concept of the painted object as his starting point, posing questions that surround the act of painting and the cultural values assigned to paint, surface and display strategies. Much of the imagery that Rhodes uses for inspiration is found on signage and posters, which he sees on the street or in the subway — blunt commercial imagery meant to be read in an instant. Sourcing colors from forms with strong associations, Rhodes uses disposable materials, also marked by the artist’s hand and treated as props, which then perform in different ways as they are subjected to a cycle of environments: the studio, the outdoors, the exhibition space.

This is the 26 year-old-artist’s first one-person show with Team Gallery. He has shown his work previously in solo shows at Acme and Sister, both in Los Angeles; in 3-person shows at both Team and at Casey Kaplan in New York; and at Office Baroque in Antwerp.