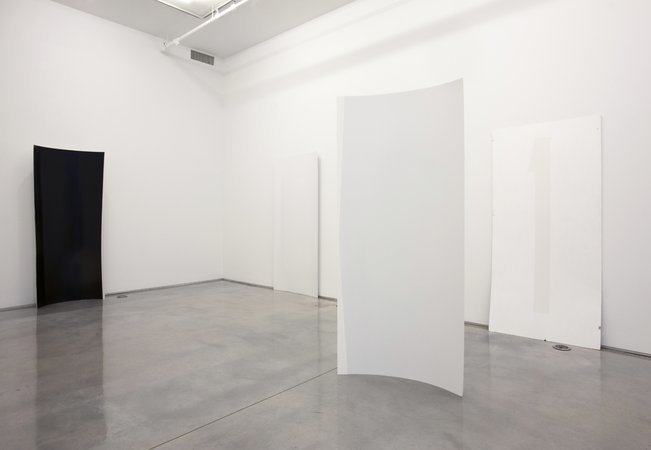 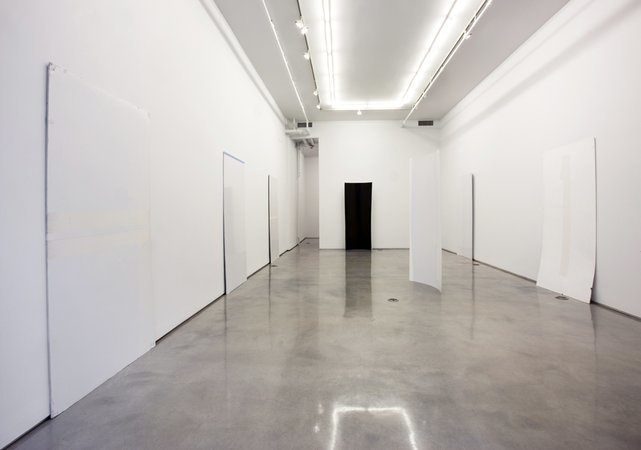 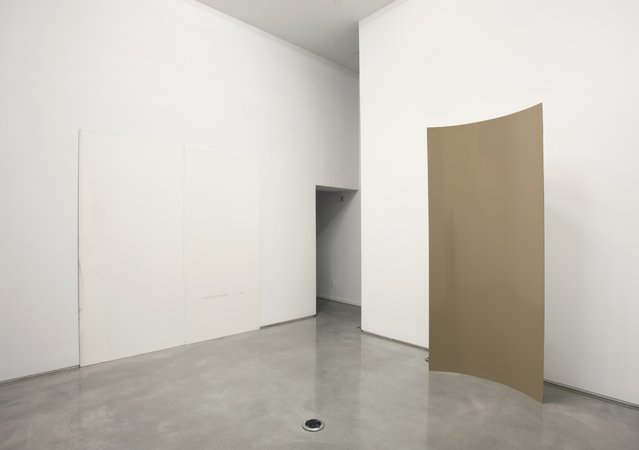 Team is pleased to present an exhibition of new work by New York-based artist Davis Rhodes. The exhibition will run from February 23rd through March 24th, 2012. Team Gallery is located at 83 Grand Street, between Wooster and Greene, on the ground floor. Concurrently, our 47 Wooster Street space will house an installation by Köln-based artist Andreas Schulze.

For his second solo exhibition at Team, Davis Rhodes presents a selection of paintings made with spray paint on foamcore board. Using the logic of radical material transformation, lightweight panels lean flat against the wall, while others, warped by the application of water-based paint, stand independently in space. At the standard size of eight feet tall by four feet wide, the paintings have a bold physical presence in the gallery that belies their precarious material means.

Rhodes’ work carries strong reference to post-painterly and hard-edge abstraction in addition to the deep influence of pop appropriation spanning from commercial signage to the guerilla tactics of amateur street advertising. As with his previous bodies of work, Rhodes channels the aesthetic practices of public visual economy into his abstractions. His paintings are composed of an economical vernacular: hard, clean lines; sheer reflective fields of color; and open, iconic signs, appear to contain a clear communicative promise. The works challenge the viewer with mute austerity as stark signs that refuse to perform as signifiers. Some pieces resemble imploded mirrors, offering only shadowy reflections and subtle visual distortions, while others are blank slabs, mirroring only the white space of the gallery. With opaque colors and the layering of whites, Rhodes’ work complicates ideas of frontal forms in painting while at the same time denying real references.

The large glossy surfaces are scattered with drips, leaks, cracks, discolorations and folds which are subtle traces of the parallel and unpoetic painterly reality of the materials Rhodes employs. The functional, base application of spray paint to foamboard is emphatically outside the frame of painting and the context of the gallery. This external provenance persists in the work as antithetical to the pristine and protected presence of unique objects viewed within the gallery setting. The works hinge on the tension of display versus use values, suggesting the impermanence of their visual status.

The obstructions and reflections in Rhodes’ work mime situationist, interventionist, and textual gestures of reversal and provocation. These monolithic forms combine the extreme restrictions of minimalism and monochromes with an open, porous practice that finds practical antecedents in the positions of Arte Povera and post-minimalism. Rhodes’ emphasized material strategies echo a legacy of artists as diverse as Blinky Palermo, Gordon Matta-Clark, Oliver Mosset, Robert Ryman, and Richard Serra.

Davis Rhodes has been exhibiting his work since 2006. He has been the subject of solo exhibitions in New York, Los Angeles, and Antwerp.