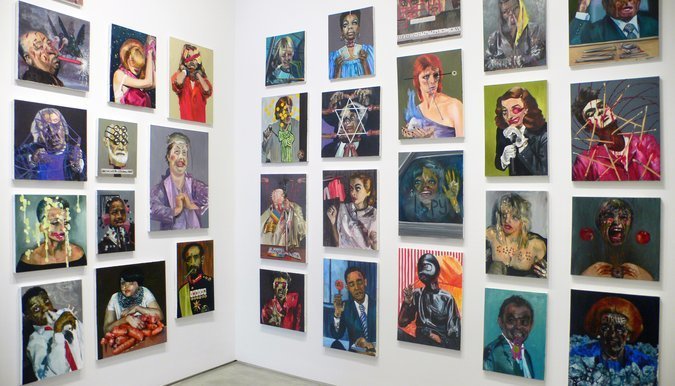 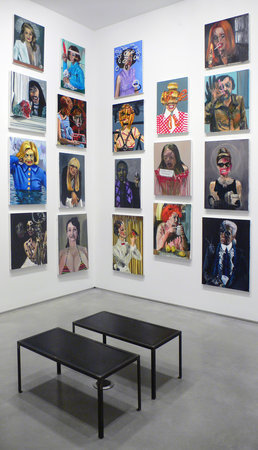 Team is pleased to present an exhibition of new paintings by London-based artist Dawn Mellor. Entitled A Curse on Your Walls, the exhibition will run from the 19th of June through the 8th of August 2008. Team Gallery is located at 83 Grand Street, cross streets Wooster and Greene, on the ground floor.

Dawn Mellor’s latest exhibition will be made up of two bodies of work — the first is a cycle of paintings that depict Dorothy Gale from The Wizard of Oz in a variety of politicized and confrontational situations; the second is a portrait gallery of world figures entitled Vile Affections.

For all their imagistic solidity, Mellor’s new paintings refuse to tie everything up, to present us with a tidy package of form and meaning. Exactly what does Dorothy represent? She’s even more cryptic here as a symbol than in the 1939 film. Is she a refugee? A revolutionary? An every-man? A gay mascot? Does Mellor employ her as an archetype of Americana? Is she intended as a specimen of innocence preserved? Mellor’s point is to engage in the asking of these questions, not to provide pat answers for them.

In more ways than one, Mellor’s audience is denied the comfort of guilelessness. For example, Dorothy’s mere presence in these nightmarish scenes is unsettling enough. The simple fact that she is there — the perverted role she is playing, either willingly or by force, as well as the viewer’s role as witness to what is unfolding — is enough to elevate a slightly unsettled feeling into an atmosphere of confusion and alarm.

The second gallery space at Team will be used to introduce New York to Mellor’s ongoing Vile Affections project, which has already been shown extensively in the UK. This growing portrait gallery represents a wide assortment of figures: Mother Theresa, Amanda LePore, Morrissey, Tony Blair, Janet Leigh, Karl Lagerfeld, and Margaret Thatcher, among them. All of them have been (to put it mildly) knocked off their pedestals.

It is uncomfortable to watch our icons, both popular and political, be toyed with, mocked, even desecrated. We might want to turn away, yet we can’t help but gawk. Mellor’s paintings are too beautifully rendered, and their helter-skelter content too intriguingly strange, for us not to look. We find ourselves transfixed by a zombie version of Dorothy, a drowning Hillary Clinton, a bearded Nicole Kidman, an eyeless Michael Jackson, like exhibits from a ramshackle circus side-show. The psychological warfare Mellor inflicts on these idols — and by extension, on the viewer who reveres them — transforms our fascination with their celebrity through the guilty pleasure of our disgust.

Dawn Mellor has had numerous solo exhibitions in London, New York, Venice, and Brussels. An ambitious one-person show is slated to open in November at Zurich’s Migros Museum fur Gegenwarstkunst. This is Mellor’s third solo show at Team.