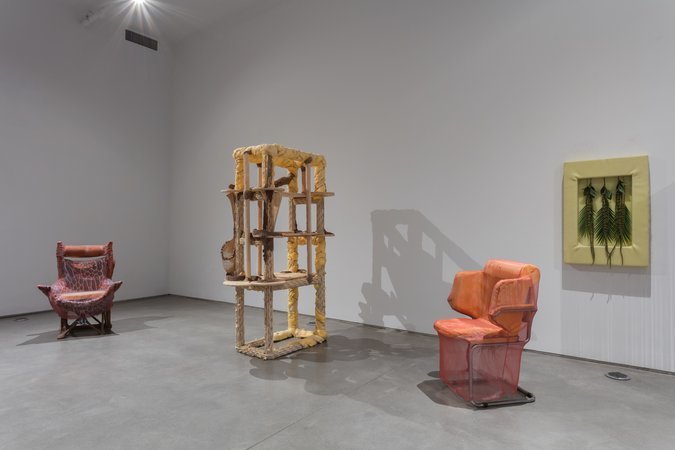 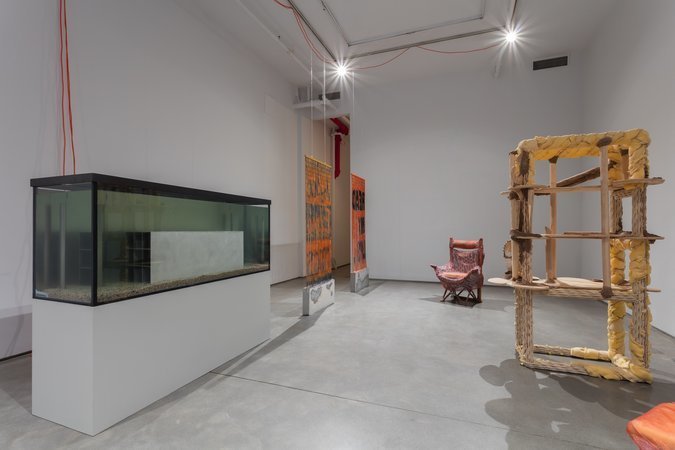 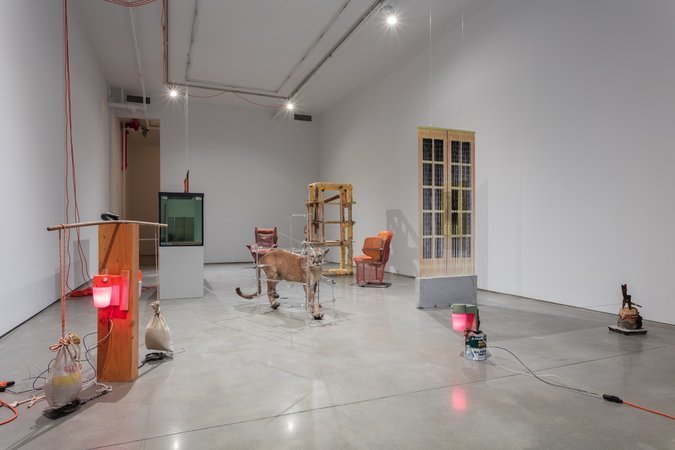 Team (gallery, inc.) is pleased to announce a group show of work by Catherine Czudej, Max Hooper Schneider, Jessi Reaves and Anicka Yi. Entitled Dolores, the exhibition is organized by Todd von Ammon, and will run from 08 September through 09 October 2016. Team Gallery is located at 83 Grand Street in New York.

Dolores’ participating artists metamorphose the gallery’s white-cube space into a mise en scène, one at once alien and familiarly domestic. While the show’s comprising pieces all emulate the forms of mundane household furnishings, the artists’ interventions dramatically alienate these works from their referent objects. The result is an aura of portentous theatricality, a compelling miasma that directly invites viewer interaction while simultaneously warning against it.

Installations by Catherine Czudej consist of hand-made booby traps affixed to motion sensor lights. The perfunctory weapons are modeled after those employed by the Viet Cong, employing the likes of sharpened rebar, concrete and coffee cans. Combining the effects of rudimentary guerilla warfare with those of suburban American life, the works evince a sensibility of paranoid self-sufficiency and scabrous DIY survivalism.

Max Hooper Schneider contributes a work that uses electricus electrophorus knife-fish – commonly known as electric eels – to power the gallery’s overhead incandescent lights. The artist has constructed a transparent, coffin-sized tank, which harnesses the electrical currents generated by the fish and routes that energy to the space’s circuit board. The animals create a constant, ambient level of electricity, but respond to the presences of prey and other agitations with stronger charges. As a result, the lights flicker and fluctuate dramatically according to shifts in the environments internal and external to the eels’ encasement.

Jessi Reaves presents sculptural works which, clustered together, read as a living room set: her rough-hewn, furniture-like objects are arranged around Hooper Schneider’s eel tank, which serves here as the bizarre stand-in for an entertainment console. The pieces’ apparent dilapidation is apocryphal: the artist exactingly crafts her aesthetically adulterated couches and chairs to reveal their own structuration without sacrificing functionality. The constituent materials – upholstery foam and hand-woven mohair, for example – display the patina of their use, conforming to the phantom-like impressions left by human bodies.

Anicka Yi provides a new, freestanding work, which consists of a taxidermied mountain lion buttressed by an enfettering scaffolding of plastic medical fixtures. The animal’s body is posed in a lifelike, aggressive stance, while also exhibiting visible signs of decay. In exaggerating aspects of the practice of taxidermy, the artist arrests her subject in an intermediate state, emblazoned with contradictory signifiers of life and death.