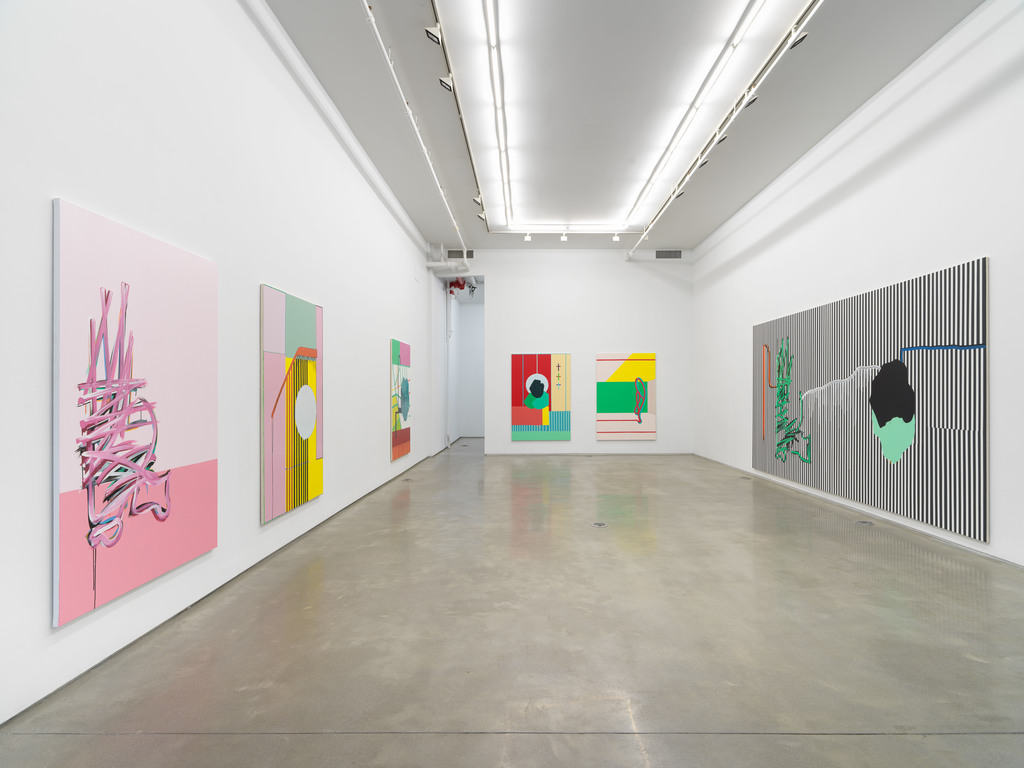 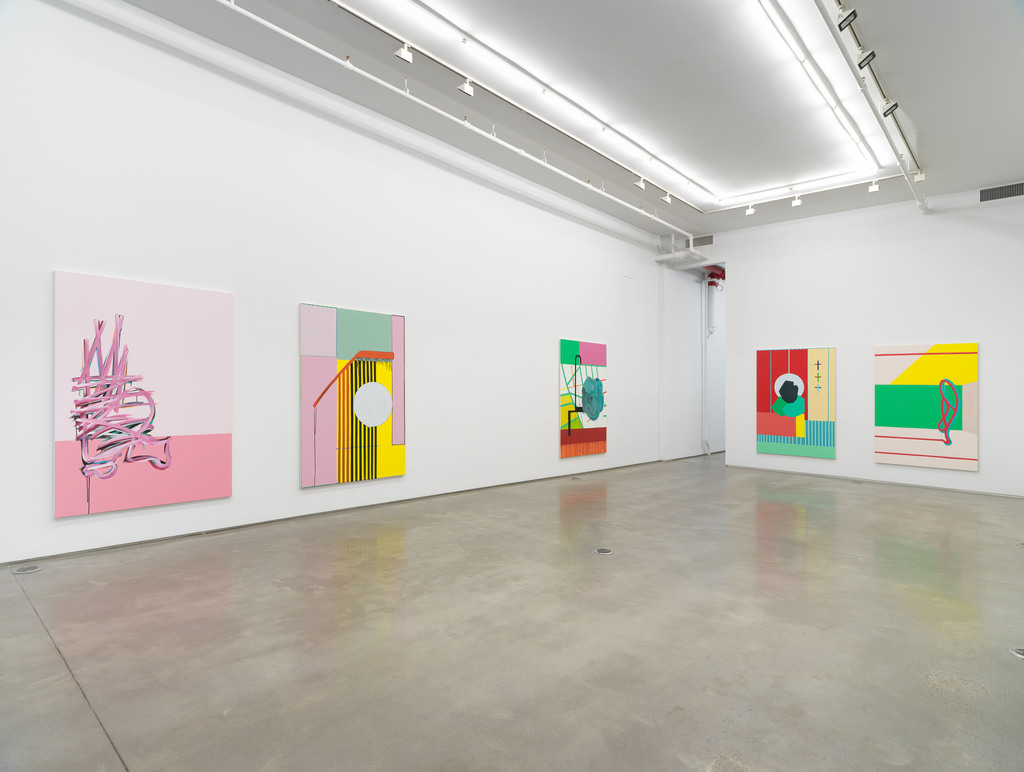 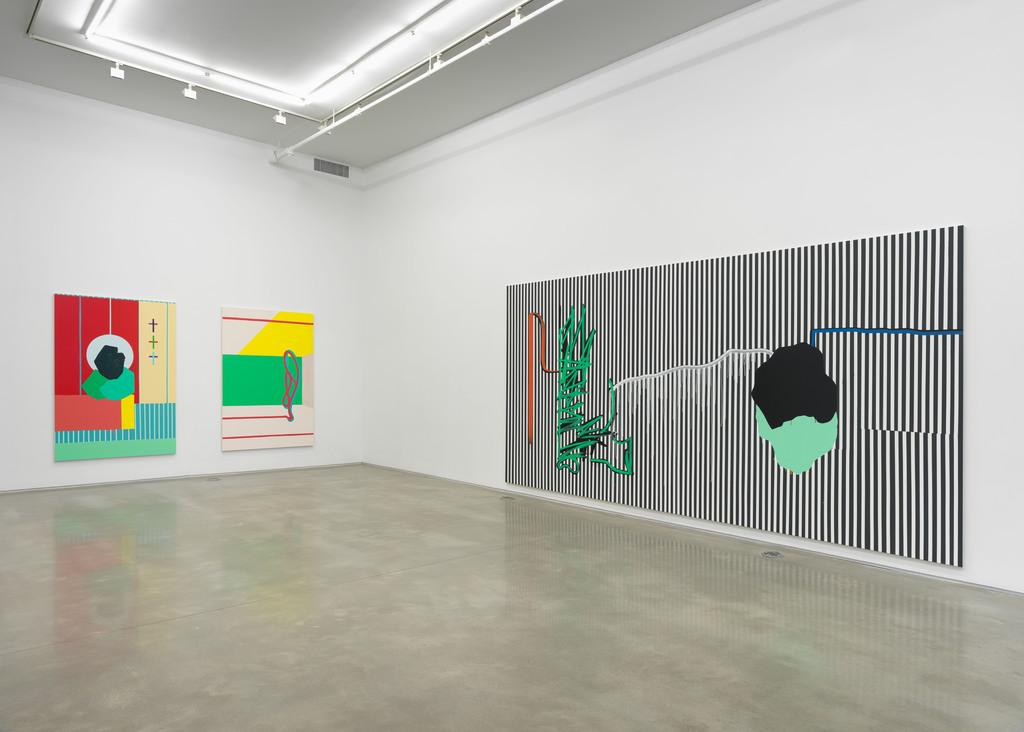 Team (gallery, inc.) is pleased to announce a solo show of new paintings by Egan Frantz. The exhibition will run from 05 September through 05 October 2019. The gallery is located at 83 Grand Street, cross streets Greene and Wooster, on the ground floor.

Good paintings, those with intrigue, appeal and tension, ask us to hold competing and simultaneous understandings in mind, and contend with synchronized yet oppositional forces. At odds with the unexpectedness and complexity of Egan Frantz’s works is an effortlessness, an instinctive ease, vital in producing an image that is at once seemingly familiar and impossible to place. This is a show of new images, adamantly straightforward yet enigmatic, that manifest a proprietary power and charged presence.

Frantz employs ubiquitous and non-specialized equipment – a 3 and ½ inch housepainter’s brush and synthetic polymer paint – in a practice marked by invention and experimentation. In this regard, one might find similarity in the restless and predatory abstractions of Charline von Heyl or Mary Heilmann, and the playful seriousness of Alfred Jarry’s “pataphysics”, a (pseudo-)science of imaginary solutions and unreasoned order.

Frantz formulates a limiting and self-perpetuating procedure and vocabulary, with composition emanating from an exigent, graduated calibration of color, structure and form that makes visible and tangible the vectors by which the components of a painting act through and upon one other. Deft, methodical marks accumulate into bursting asterisks of vivid color that directly register the relationship between user and tool; the blocky edges and wet-on-wet strokes witness the formation of these ambiguous yet forthright elements, revealing agency, ontology and the rift between calculation, intuition and outcome through and oddly satisfying juxtaposition of rational and irrational processes. Synthesizing these paradoxical forces, Frantz follows where painting leads: images full of event and emotion, communication and signification, gesture and activity.

Vertical stripes reappear throughout the works in the show, an ordered visual device that evokes a musical staff and establishes a foundational relationship between line and space upon which other elements are registered. There is considerable variation in how the stripes are rendered – their level of aestheticization, and the measurement of the intervals – and how they are compositionally integrated, altering both their conceptual character and the tempo of the paintings. Frantz calibrates a pacing and cadence that is insistent and catchy, an architectonic and visual rhythm section elemental of the paintings’ speed and heat.

The artist frequently utilizes a portrait-orientation format just narrow enough of impose a degree of compression, affecting the sense of scale and proportion as well the perception of space within the picture plane. Setting the compositions on edge and evoking a sense of the unheimlich, the artist compels a sustained second-guessing to reconcile the paintings’ resolution with the feeling that things are ever-so-slightly-off. This sensibility extends to the palette, which pairs high-keyed primaries and microwaved pastels, syrupy pinks and buttery greens. Frantz choreographs color relationships – soft edges and vibrating boundaries, optical shifts and spasms in tone and vibrancy – that would make a fan of Albers or Knoebel. Dynamic part-whole relationships unify the pictures while keeping on the cusp of imbalance.

Despite the paintings sharing a common genome, perhaps the artist’s most significant achievement is in not repeating himself, maintaining a committed enthusiasm for surprise, anomaly and tangent. These electrifying paintings share an experimental core and broad appeal, in which incongruity and invention pull the familiar into new territory. Frantz positions dissonance and harmony as complementary ingredients in the coherent variety of the works on view, which detail a reckoning with agency, limitation and the possibilities that come with ceding control and uncovering something comfortingly strange in the process.

Egan Frantz was born in Connecticut where he lives and works. He has exhibited widely in stateside and abroad, having mounted solo shows and projects at such galleries as Nagel Draxler in both Berlin and Köln, Roberts & Tilton in Los Angeles and at Tilton Gallery, Miguel Abreu and CLEARING, all in New York. Frantz was the subject of a recent solo at Germany’s Neuer Aachener Kunstverein. This is his first solo with Team.

The gallery is open from Tuesday through Saturday, 10am to 6pm. For further information and/or photographs, please call 212 279 9219.