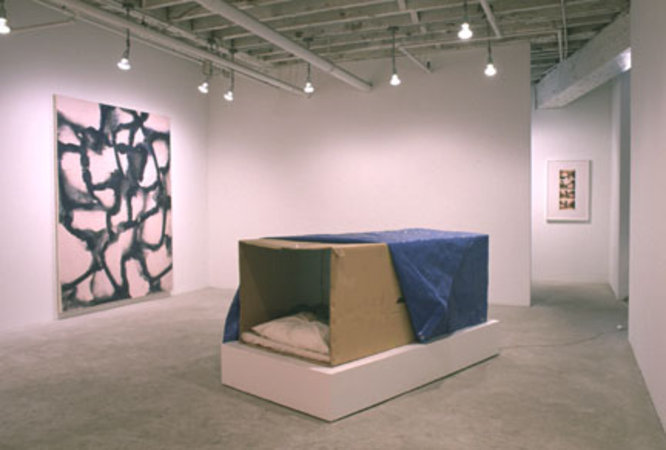 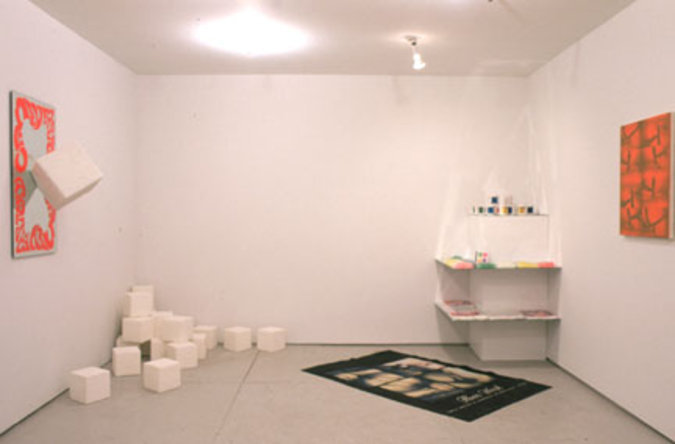 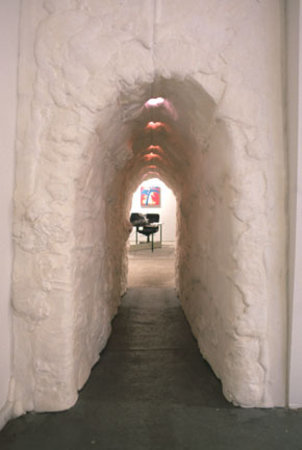 Team presented a collaborative project, entitled Candy Factory, by Eric Heist and Genesis P-Orridge from the 10th of February through the 10th of March 2000.

Genesis is a performance artist and musician whose career has spanned 30 years. He founded Coum Transmissions, the influential industrial music group Throbbing Gristle, then Psychic TV. He now heads a music/spoken word project titled Thee Majesty. Numerous books have been written about him and his work.

Eric Heist had been working on sugar-coated paintings which contained silk-screened images of crowds of people. In this work, sugar represented desire as an inescapable driving force behind human interaction These paintings, along with Heist's interest in P-Orridge's past work and ideas that step outside of the insularity of the art world, formed the basis of this collaboration. "Candy Factory" refers to both Candy Darling and "the Factory", Warhol being an important figure in generating ideas for the project.

For this collaboration, Genesis provides Polaroids of intimate, carnal acts from which we create a variety of art objects which present desire as the impulse for interaction set against the framework of institutional structures. Paintings and sculptural objects are presented as self-conscious class signifiers, referring as much to the systems that create them as to their qualities as art objects. Paintings which appear at first to be abstractions reveal themselves upon closer inspection to be made up of silk-screened dildo straps, sculptures which appear to be pure white minimalist sculptures reveal themselves to be sugar-coated end tables. There are museum gift shop items like t-shirts and coffee mugs bearing the "candy factory official souvenir" stamp and ambiguous yet explicit images from the Polaroids. There are also sculptural pieces which present the images as enlarged light boxes set within the frameworks of construction sites and homeless refuges. Desire is presented as a necessity to human survival transcending issues of economy and class.

In Candy Factory, desire itself is presented as an addiction. It represents our search for something to break our habits and relieve boredom, which leads to the recognition that existence itself is a habit. Sugar represents that desire which drives us to continue.

The artists are more interested in presenting a context for the imagery in order to critique the idea that the erotic is an escape from the real world. Desire can also be seen as utilitarian or political. It can be used to deconstruct institutional structures. The satisfaction of desire does not represent escape or freedom from limitations, but represents limitation itself because we cannot escape desire. The mistaken idea that it does represent freedom leads to a vulnerability to images of desire which are used to direct our actions, as in the case of advertisements, which exploit images of desire.

Mirroring and substitution are recurring themes in this project. Objects are replaced with androgynous images, confusing our objects of desire. Dracula's mirror reinforces the implicit androgyny of Dracula, Living Room provides a collectors item which reflects back the taste of a bourgeois interior, something desired because it is unattainable. In Museum Piece(Object Removed), the object appears to be missing, replaced with the image of a less than attractive ass, elevated to the object of a museum artifact through presentation.

The title Candy Factory refers to Warhol, particularly his ability to bring the contemporary world and a critique of commerce into artmaking, as well as his interest in androgyny to deconstruct desire.

The gallery space will be entered through claustrophobic a 6 foohigh, 15 foot long, tunnel. This tunnel will be constructed in sections, which can be disassembled and reassembled to fit into varying gallery spaces. The surface of the tunnel walls will be covered in sugar. The tunnel will be illuminated solely by light boxes set into the roof of images from digitally enlarged Polaroids depicting voluptuous bodies.

Two large, 90 by 72 inch, paintings will be hung in the large space along with several smaller silk-screened paintings. Two pre-recorded ambient soundtracks alternate, providing an ever-changing aural landscape for the exhibition.

The rear gallery will display multiples and limited editions for sale. These artifacts will allow everyone who visits the exhibition a real opportunity to participate in the experience by taking something home - like candy at the funfair. These will include coffee mugs, T-shirts, and bags of rock candy, all displaying Candy Factory imagery and logos. There will also hang in the space a mutated rotating mirror ball, a Candy Factory end table, a pile of oversized sugar cubes, and an edition of 3 sexually explicit carpets designed as Candy Factory posters with the scripted caption "Floorwork, Eric Heist & Genesis P-Orridge 2000".Hung on the wall will be a mirror with the words "candy factory" decaled in psychedelic lettering with a sugar cube emerging from the surface of the mirror. The cube and mirror will be suggestive of 70's style rock and roll paraphernalia, introducing a youth culture commodity into the installation.

This is both an exhibition of artworks as separate items and as an integrated whole. They are both connected and disconnected by the process of choice and the experience of being both with and within them. In this case, even being without, outside them, is part of the experience. Needing generating compulsion to discover highs and lows. Life is manufactured by ideas made incarnate. The carnal is the divine brought down, momentarily, to our earth and our bodies. Just as each individual is part of a homogenous whole, society, they are also alone. Just as they are unified in their most intimate expression of union, so they eventually must face an unknown mystery, mortality, alone. That which bonds them into an environment and makes life sweet, also consumes them and is consumed. That delicacy and joy of stripping away facades in deepest privacy also creates, and is, vulnerability. We dissolve in each other and in the greater social organism. Bitter sweet. Belonging and longing.

As we become addicted, we repeat the most satisfying fragments and methods trying to bond our self more permanently to the other. Consumption is implicitly insatiable. Production lies upon our impossible to fulfill desires and appetites. The perfect product is addictive, and we become frozen in the process and the attainment of the product instead of lost in the delirium that rises above mundanity and temporal existence. This addiction occurs at all levels of society, the craving to possess infecting the destitute and the wealthy, the adult and the child, with social structures and institutions creating zones of desire and unattainability seemingly impossible to traverse.

The moment when the most successful addictive substance, sugar, was irrevocably linked with LSD, was as significant to the evolution of human consciousness as splitting the atom was to our comprehension of the mystery of physical matter and particles.

To introduce the element of desire to this alchemical portal immediately focuses our potentiality as beings into a place that offers a new way on through a sensual, spiritual, hitherto inaccessible portal, recognizing and critiquing those elements of classification which deny access to such a place, downloadable through implication and new sets of association.

All the images and works in this installation simultaneously exist independently and collectively. Through immersion and the viewers gradual process of traveling through, contemplating and allowing the associative effects to work on and within, the entire installation is assembled within the perceptual and interpretive mind of the viewer. The artists providing visual, auditory, and tactile clues, each viewer bringing memories and reactions to incrementally increasing aesthetic and sensual (desire-producing) information produces a unique cognitive impact.

There are multiple works with multiple presence. The material works themselves; the installed environment; the visual, auditory, tactile (even taste-full) physical sensations; the subjectively assembled ultra-work assembled individually to include nostalgia, desire, intimacy, sentimentality, childhood joy, and a Diaspora of adult disillusion.