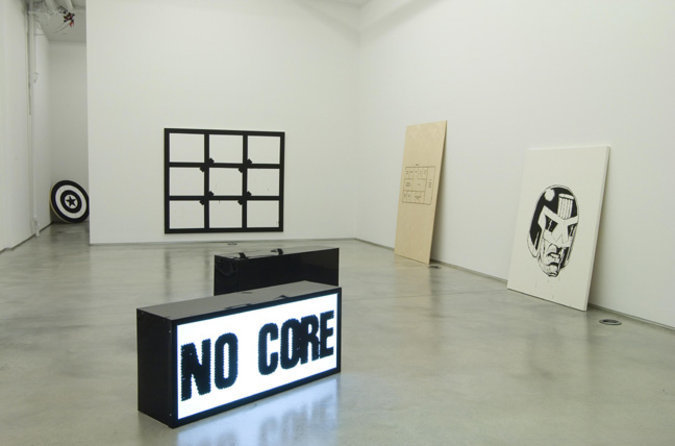 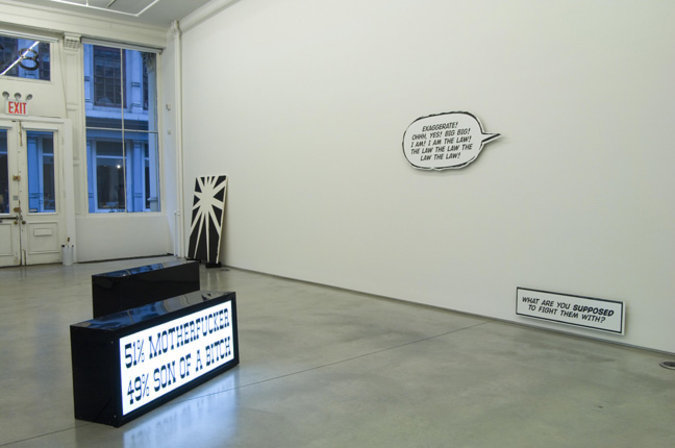 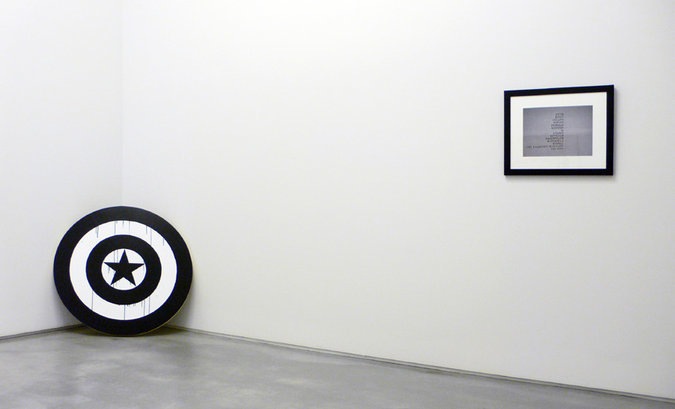 Team Gallery is pleased to inaugurate its second season in SoHo with a solo show by Norwegian artist Gardar Eide Einarsson. Entitled Judge, the exhibition will run from the 6th of September through the 13th of October 2007. The gallery is located at 83 Grand Street, between Wooster and Greene, on the ground floor.

The glue that binds Gardar Eide Einarsson’s work together is the manner in which popular culture, in such forms as graphic novels and promotional materials, can act as a conduit for the expression of political positions. In his hands, surprisingly, the literal exploration of the thematic ‘’law is for the protection of the people’’ creates a non-didactic environment latent with ambiguity. Much, although not all, of the material for this exhibition was drawn from the Judge Dredd comics—a dystopian future-vision that focuses on a central character who dispenses an authoritarian, immediate and violent form of justice. The Dredd comics appear to attack Fascist positions while both celebrating their domineering aesthetics and utilizing totalitarian struggles for their narrative drive. Einarsson here counter poses the fictitious Judge Dredd against the historic 19th Century German figure of Judge Schreber, a benevolent and highly regarded jurist who quite famously descended into madness.

In Einarsson’s work a viewer is free to tease out a series of subject positions through a process of interrogations: Who is the terrorist? Who is the patriot? Who is the criminal? Who is the hero? Can, and should, an artist be all of these things? How does one untangle a net that weaves separatism, individuality, the collective, and the democratic within a matrix of laws and other social institutions? What is the relationship of contemporary art to the political, and is this relationship always doomed to failure? Is Einarsson just more of this black and white greasy kid’s stuff or does his work gain in depth when read against such artists as Jasper Johns and Ad Reinhardt?

The work of Gardar Eide Einarsson is part of a modest revival among young artists seeking to re-investigate the possibilities of text-based forms. He deploys text through a widely variegated strategy that includes the disciplines of painting, photography and sculpture, rather than restricting himself to one mode of production. This show of signs appropriates diverse texts—first distilling them, then unleashing them, in a condensed, yet cryptic, form. The works on view, ranging from abstract paintings or vinyl wall texts, are all functional vessels of political expression, albeit ones that refuse to transfer all their meaning in one go. Newspaper clippings, protest signs, album art, prison tattoos and corporate logos all become triggers for Einarsson’s production, one which consistently points to the ideological battle inherent in sign systems. Many of the works in Judge, for example, take aim at patriarchal authority, attempting to undermine its monolithic power through ridicule.

This is Einarsson’s second one-person show in the United States. He has previously been the subject of solo shows in Oslo, Berlin, Koln, Paris and Copenhagen and has participated in numerous group exhibitions throughout Europe. Einarsson’s first solo museum show opened this past July at the Kunstverein in Frankfurt, Germany and will tour this Fall to the Centre d’Art Contemporain in Geneva. A book is currently being published by Revolver to document that exhibition.