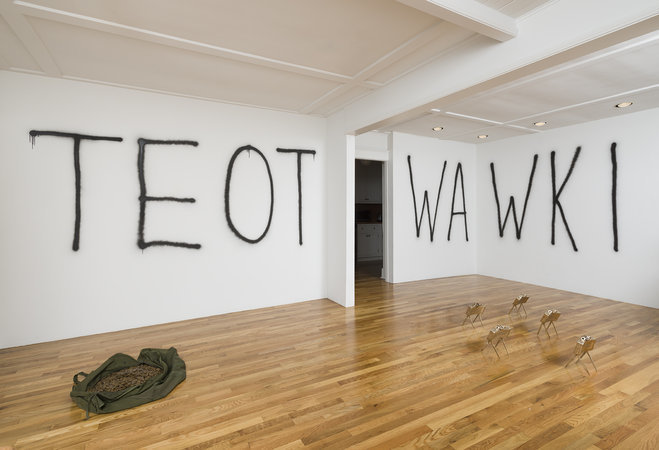 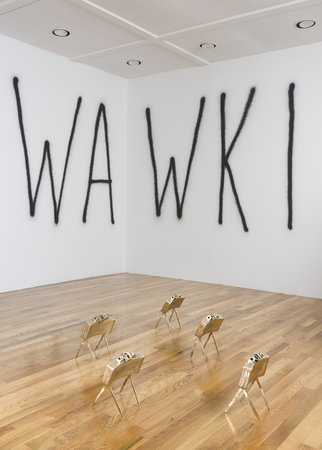 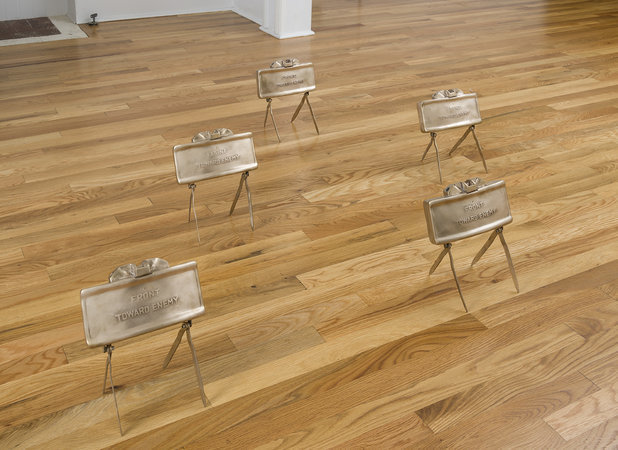 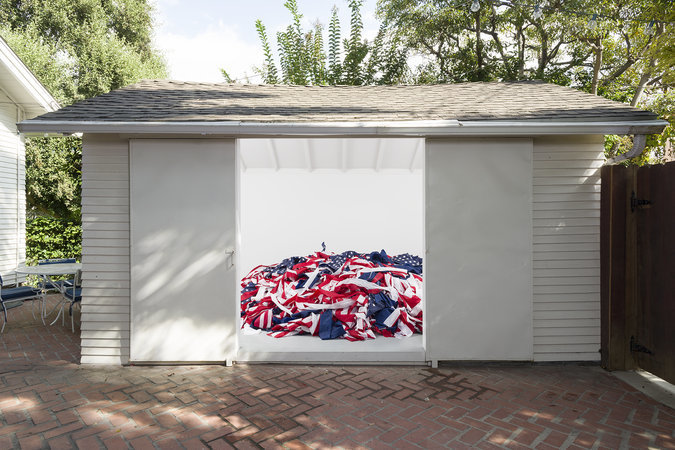 With this exhibition, Einarsson engages with the suburban, domestic setting of the gallery, responding to the historically potent tensions in the current global political climate by casting the bungalow space as a doomsday prepper’s home. A central facet of the literature associated with this subculture, often referred to as “prepper guides,” is the transformation of a typical American dwelling into a DIY fortress in order to protect the inhabitants, when, inevitably, an apocalyptic event unleashes the latent violence of formerly friendly neighbors. The happenstance that this exhibition will occupy the space during a particularly ugly and fraught U.S. presidential election is thematically fortunate.

The garage located in the space’s backyard will house a substantial sculpture entitled Flagwaste (Stars and Stripes), which consists of the remnants from the production of American flags, piled and scattered on the floor. The materials have been obtained directly from U.S. factories, the residual waste of the flags’ fabrication process. The work refers explicitly to Robert Morris’ Untitled (Threadwaste) from 1968; the latter piece – an amorphous mass of industrial thread, the refuse from textile manufacturing, interspersed with bits of felt, asphalt and copper tubing – is a seminal example of late Minimalism, and questions the cultural relegation of certain materials as refuse. Einarsson extends this logic to provide a metaphor for the necessary role of exclusion in the construction and definition of a nation state.

Immediately upon entering the house itself, the viewer encounters several bronze casts of M18A1 Claymores, directional anti-personnel mines employed by the U.S. military. The spurious explosives stand on four delicate legs, their faces emblazoned with the text “FRONT TOWARDS ENEMY” and oriented towards the audience. The inscription, which appears on the actual weapons, reflects the preppers’ belief that all outsiders are potential enemies, explicitly placing the gallery visitor in the role of hostile intruder and target of defensive violence.

Another work, entitled B.O.B. (Poor Man’s Gold), is a U.S. Army parachute bag filled with old American pennies. The acronym B.O.B. stands for “bug out bag,” a common phrase in survivalist culture, which describes a bag packed with essentials in the event of a catastrophe that necessitates a quick escape. “Poor man’s gold” is prepper slang for American pennies, which many adherents collect, believing they will retain a strong material value following societal collapse. A penny’s constituent copper already exceeds its monetary value, although melting the coins down is a crime – the illegal destruction of currency. The piece also provides an explicit illustration of the art market, in which objects may serve as a means to store value.

This is Einarsson’s sixth solo show with Team. He has been the subject of solo museum exhibitions at ARos Aarhus Kunstmuseum; Astrup-Fearnley Museum in Oslo; Bergen Kunsthall; Bonniers Konsthall in Stockholm; Centre d'Art Contemporain in Geneva; the Contemporary Art Museum St. Louis; The Fridericianum in Kassel; Kunstverein Frankfurt; The Modern Art Museum in Fort Worth; and the Rekjavik Art Museum.