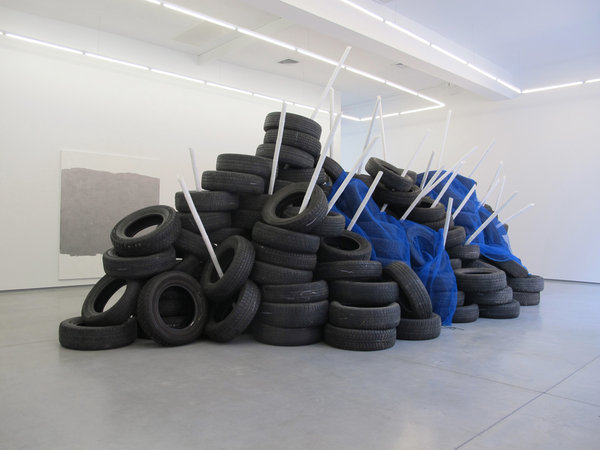 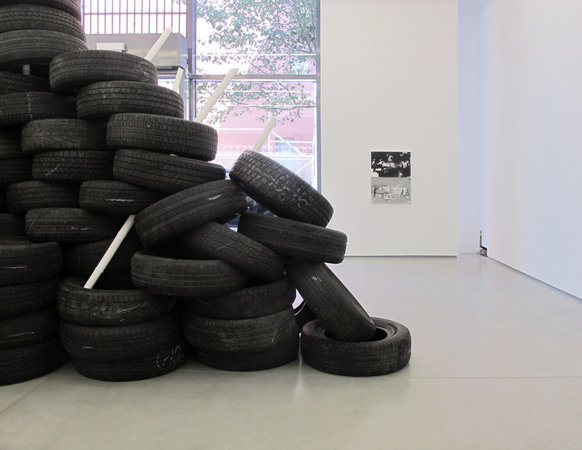 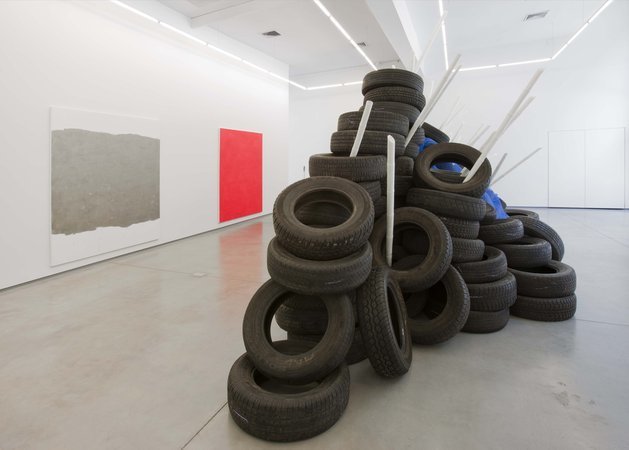 Team is pleased to present a solo show of new work by Gardar Eide Einarsson. The exhibition, entitled Sorry If I Got It Wrong, But Something Definitely Isn’t Right, will run from 07 June through 27 July, 2012. The gallery is located at 47 Wooster Street, between Grand and Broome, on the ground floor. Concurrently, our 83 Grand Street space will house an exhibition by Spanish artist Santiago Sierra.

Appropriative acts comprise the majority of Einarsson’s artistic practice. Through re-contextualization, he endows adopted elements of cultural ephemera with a political charge, attempting to transform a battery of neutral art materials into signifiers of dissent. His sources are varied, ranging from book cover graphics, to institutional architectures, to mail-order catalogues, police instruction manuals and everyday objects. Rendered in the artist’s strict black-and-white palette, they all undergo a translation into his particular artistic vocabulary, becoming, in effect, his stolen intellectual properties.

Central to the work is a constant state of negotiation between the resistant nature of Einarsson's subjects and the inherent complacency of pre-established forms. His works possess the desire to express the revolutionary but must rely upon an exhausted language, one that is already known to us. Each autonomous piece embodies this tension. Additionally, Einarsson’s intention is always to complexify the meaning of his practice by repeatedly forcing viewers to read individual pieces against seemingly contradictory works. A search for clues amongst the exhibited works always leads back to the original cultural emanation, and to other examples of Einarsson’s excavations from modern life. The artist is always willing to provide suggestions but rejects closure at every turn.

For this exhibition at Team, most of the gallery’s floor space is occupied by the installation Big Barricade (New York City), a massive pile of hundreds of repurposed automobile tires supported by spear-like cast resin bamboo stalks. The piece takes its form from the civilian barricades erected on Bangkok’s streets during the bloody anti-government riots of spring 2010. Einarsson appropriates the riots in Thailand, casting them as stand-ins for any battle, physically realized or not, between rebels and oppressive systems. Barricade calls attention to the institutionalization of violence and, by implication, the governmental sanction thereof. The artist has made versions of this sculpture for Los Angeles, Stockholm, and Basel. He locally sources the tires for each city, emphasizing the latent violent potential of quotidian objects, while furthering his dialogue with architectures of violence and radical politics. Einarsson’s sculpture, whenever enacted, acts as a symbol of resistance, blocking entry, frustrating movement.

Despite being clustered with other disrespectful postmodernists, Einarsson’s is also a work deeply concerned with the possibility of a poetics of memory — one that not only plays out in time but across the physical world. The black mass of tires in the center of Team’s space both refers to the Bangkok riots and harkens back to Allan Kaprow’s Yard. Its simultaneous combination of impenetrable mass and collapsing, loose form produces something akin to the aching, yearning qualities that have been creeping into Einarsson’s abstract paintings. The presence of this sculpture in New York calls out to its sister Barricades, several of which might have been seen by a global art traveler.

This is Einarsson’s fourth one-person exhibition with Team. Einarsson was recently the subject of a survey show, Power Has a Fragrance, which opened at Oslo's Astrup-Fearnley Museum and then traveled to the Reykjavik Art Museum, Bonniers Konsthall in Stockholm, and the Fridericianum in Kassel. Additional solo museum exhibitions have been held at the Kunstverein Frankfurt, Centre d'Art Contemporain, Geneva, The Modern Art Museum, Fort Worth, and the Contemporary Art Museum, St. Louis. An increasingly peripatetic artist, Einarsson, born in Norway, now splits his time between New York and Tokyo.