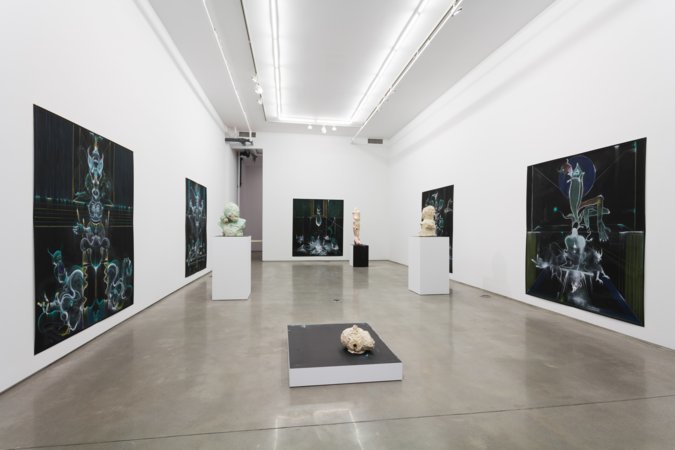 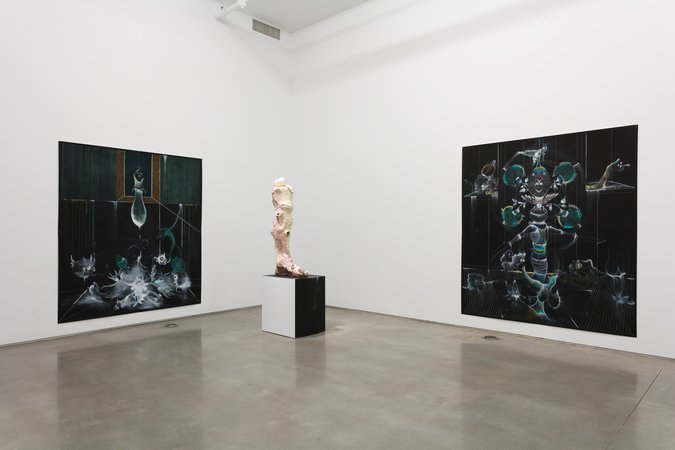 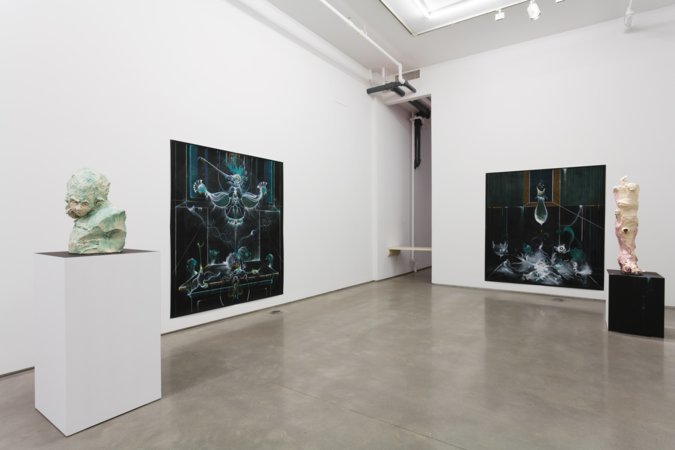 Team (gallery, inc.) is pleased to announce a solo show by Romanian-born, Cologne-based artists Gert & Uwe Tobias. Entitled Drawings and Sculptures, the exhibition will run from 05 May to 05 June 2016. Team (gallery, inc.) is located at 83 Grand Street, between Greene and Wooster, on the ground floor. Concurrently, our Venice Beach space will house a solo show by Tabor Robak.

Gert & Uwe Tobias are twin brothers who work collaboratively in a variety of media. While perhaps best known in New York for their woodcut prints and collages, for this exhibition they present a series of five drawings on black-painted paper, alongside three substantial ceramic sculptures. The works in the show refer obliquely to divergent genres and moments from Art History, erasing hierarchical and temporal classification and partition via the seamless blurring and solution of their various visual inspirations and reference material.

Each of this show’s large-format works on paper features a semi-symmetrical center composition, combining elements of phantasmagorical figuration and architectural and graphic design with geometric abstraction. Executed in pastel crayon, they are adhered directly to the gallery walls, precluding visual interference with their delicate line work. The shadowy rendering and eerie palette choices – light blues and whites on the black surfaces – imbues the pictures’ chimerical forms with a spectral quality. The absence of framing further enhances the works’ ghostly character, effecting a feeling of floating insubstantiality and bodily divestment.

Four sculptures sit atop pedestals interspersed throughout the gallery. The unified body ceramics are busts – distorted humanoid and avian faces, adorned with sunken relief floral patterns. The three-dimensional works, in their physicality, provide counterpoint and tension to the ethereality and self-conscious flatness of the wall works. In employing a classical mode of portraiture – the sculptural bust – the Tobias Brothers explicate a core conceptual facet of their artistic project: the corporeal realization of internal, private images and shared subconscious narratives. Without specifically referencing mythological archetypes, the works activate a nebula of folkloric associations in the viewer and breathe life into our common lexicon of the otherworldly and mysterious.

The Tobias Brothers’ work has always been deeply informed by Eastern European folk art. The artists spent the early parts of their lives in rural Romania, where they were immersed in the local traditions that now provide a foundational cornerstone of their practice. Certain elements of the drawings and sculptures – the floral patterning, the vases and furniture, the fantastical creatures – evidence a direct lineage from those popular arts; however, in the Brothers’ hands, these ordinarily quaint forms appear strikingly contemporary, transformed by the willfully anachronistic context and their mélange of temporally diverse influences.

While assemblage and Art Historical reference are central facets of the Tobias’ work, the pieces are never directly appropriative. Theirs is a practice of paraphrase rather than quotation, drawing upon an expansive and deeply ingrained base of shared knowledge. The genesis of the large two-dimensional works begins in a period of exploratory sketching, the products of which are then collaged and exactingly transposed onto swaths of black-painted paper. The resultant images employ a mysterious but highly consistent visual vocabulary, constituent elements of a larger private language, discernable and accessible to viewers, but understood by the twin brothers alone.

Many of the drawings’ formal elements recall Early Modernist painting – in particular, the spiritual geometry of Wassily Kandinsky. Like the founding abstractionist, the artists create and manipulate rectilinear and curvilinear shapes in a manner neither mathematical nor objective, instead dictated by the observer’s perspective. The works’ planes, while indifferent to the rules of geometry, are composed according to a wholly subjective but easily legible internal logic.

While the Tobiases employ certain structures associated with abstraction, the works in this exhibition are predominately figurative. Although they are evidently and emphatically non-mimetic, most of the shapes contained in the work have real-world referents. Like the surrealist pioneer Max Ernst, the Brothers pursue a familiar unreal by amalgamating disparate kinds of form – evoking the animal, the architectural, the human, the floral – into single cohesive entities. Their metamorphic relationship to reality can also be likened to that of the multidisciplinary artist Oskar Schlemmer, whose work transfigured bodies into elements of geometric scenery.

Disembodied human limbs – in particular arms and hands – appear recurrently in the drawings. The fingers are always positioned evocatively, alluding to but never directly conjuring the symbolic power of specific hand gestures in Medieval and Renaissance painting. The lithe, vigorous body parts frequently emerge from non-organic forms – a vase, for example, or a chair – to disturbing effect. In this aspect, the works recall the life-sized, anatomically apocryphal dolls of Hans Bellmer, who exploited viewers’ discomfort with the union of the living and the inanimate.

All of the drawings, to varying degrees, contain pale linework that serves to suggest an architecturally spatial setting. The repetition of thin, vertical white lines directly signify the influence of Francis Bacon – in particular, his 45 studies after Diego Velásquez’ Portrait of Pope Innocent X. Like those paintings, the Brothers’ works seek to destabilize the conception of subject and non-subject, of background and foreground, as distinct – instead rendering the whole picture a unified flat field, in which everything, even the elements that imitate linear perspective and suggest dimensionality, are elements of a single contiguous image.