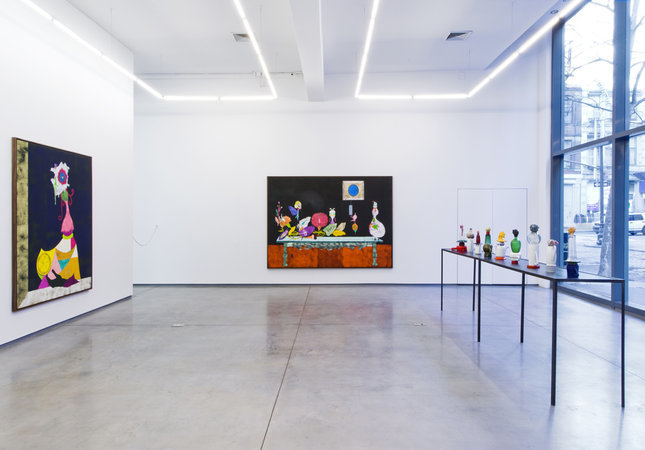 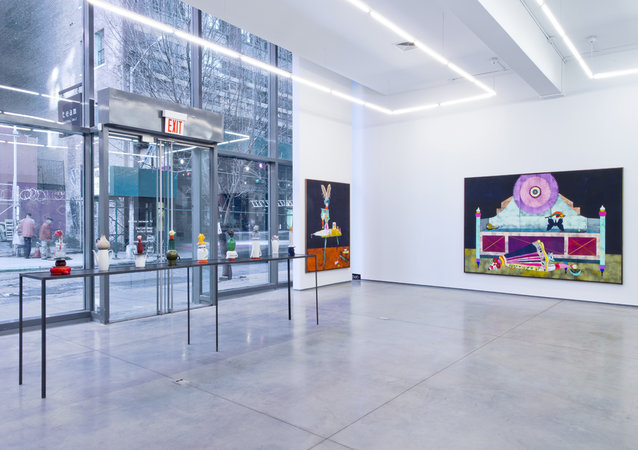 Team Gallery is pleased to present an exhibition of new work by the Romanian-born, Köln-based artists Gert & Uwe Tobias. The exhibition will take place in both gallery spaces and run from the 21st of February through the 30th of March 2013. Team Gallery is located at 83 Grand Street, cross streets Wooster and Greene, and at 47 Wooster Street, cross streets Grand and Broome.

Since the early 2000s, Gert and Uwe Tobias, artist collaborative and twin brothers, have developed a unique and multivalent practice that covers the spectrum of media from drawing, collage, typography, painting and printmaking, to ceramics and installation. Their work typically incorporates such contradictions as abstraction with figuration, modernism with folklore, technology with craft, and comedy with tragedy. Tobias installations frequently include organizational arrangements of colorful, architectonic wall painting and structural effects that act as both connectors among disparate elements — all “untitled” — and enactors of the mirroring strategies of reflection and symmetry. The many forms which their work takes help locate the images within a wider vocabulary of art history, collective memory, and political and personal history.

The Tobias brothers have become known most prominently for their large-scale woodblock prints on paper and canvas, where they utilize the ancient stamping technique of black-and-white small scale illustrative printmaking in anachronistic, elaborate, and oversize chromatic compositions. The artists develop flat, matte, and dark grounds onto which graphic patterns, organic forms, and ambiguous, amalgamated figures are set. The objects and bodies of the Tobias tableaux are often drawn from archetypal folk figures of their Transylvanian heritage, including the notable character Vlad the Impaler, as well as Romanian political lineages of dictatorial urbanization and Socialist architecture. The mingling of abstract and faintly gridded grounds with mysterious physiognomies acts as a way to line up the experiences of rigid geometric and abstract modernism with the popular symbols and narratives of figurative art history.

The tableaux of the new works on view include the macabre and fractured figures the artists are known for, mounted to inky black color fields with baroque furniture centerpieces. In one massive canvas, a luminous, pastel-hued daybed that could double as a crenellated coffin is the setting for an overturned bird, a hybrid figure somewhere between bat and butterfly, and a cross-section of a fruit with insides resembling human organs. A figure at the foot of the bed is more courtly costume than body, shaped like a lampshade or an umbrella with a single leg that ends in a hoof. Another woodblock painting presents a long dining table as if from a Renaissance vanitas still life, classically laid with fruits and meats in various states of ripeness and decay. In this case, the still life elements are amorphous forms somewhere between autumn leaves, sea animals, and strange beasts. A third large-scale woodcut has no central furnishings, but instead presents an arabesque of razor-sharp flowers, fruits, starbursts positioned on thorny black vines against a luminous silver grid. In each vague bud are geometric kernels reminiscent of seeds, eyes, or other orifices—elusive composite sites of myth, nature and ornament, ripe with latent violence and symbolic potential.

Also included in this latest exhibition are over two-dozen new works on paper which locate printed found images within lushly painted backgrounds. The space of the drawings is created by the placement of delicately cut book and magazine reproductions of animals, limbs, windows, furniture and the like against ridges of paint and modulations of hue. A body of new sculptures furthers the Brothers’ investigation of the collage effect. Small, beautifully fired and painted ceramics, ambiguously shaped like creatures, sit atop towers made from agglomerations of functional household artifacts like butter dishes, teapots and ashtrays. The resultant personages are called forth from the juxtaposition of the hand-made heads and the cobbled-together found objects that complete their bodies.

This is the Tobias brothers’ third solo show at Team. They have had solo exhibitions in the US at the Museum of Modern Art in New York and at the Hammer Museum in Los Angeles. In 2012, the artists had solo museum shows at FRAC Auvergne, Staatliche Kunstsammlungen Dresden and Der Kunstverein Hamburg. Solo shows have also been mounted at the Gemeentemuseum in The Hague, the Kunstmuseum in Bonn, the Bergen Kunsthall in Norway, the Kunsthalle Wien, and the Franz Gertsch Museum in Switzerland. An upcoming solo is slated for later this year at Whitechapel Gallery in London.