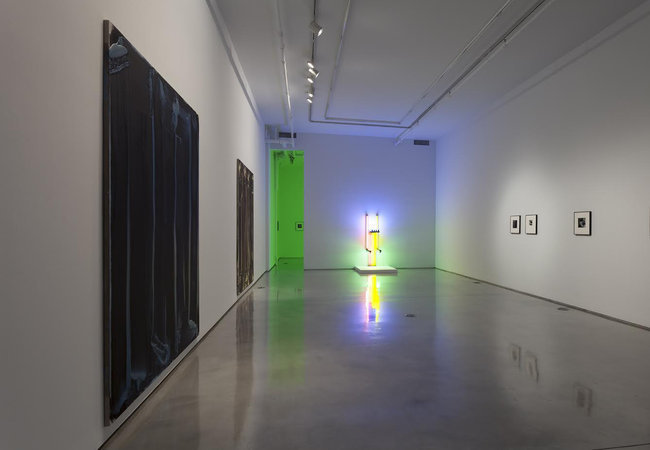 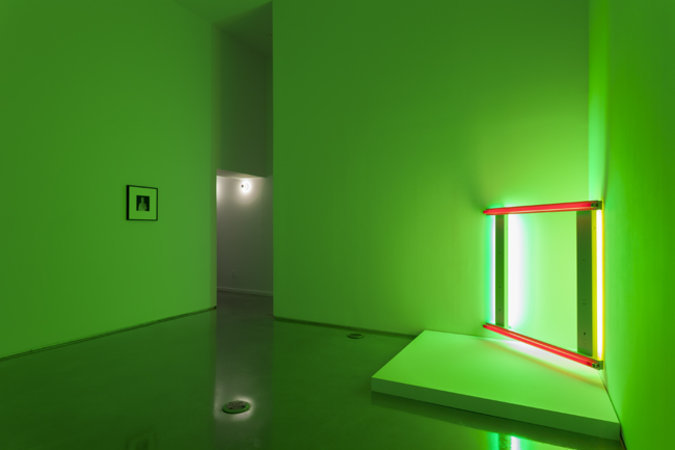 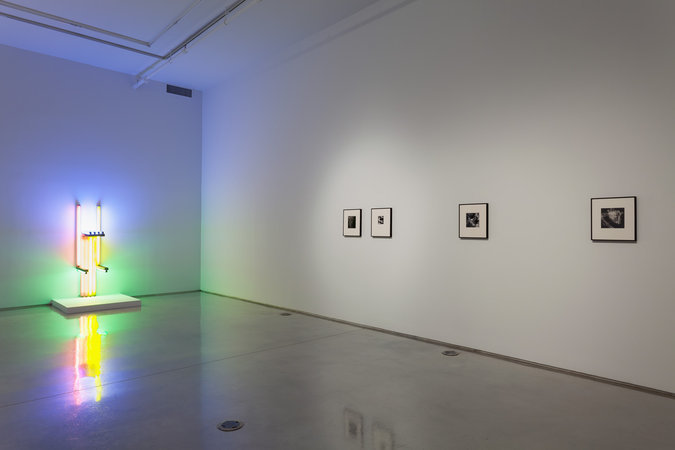 Team (gallery, inc.) is pleased to announce ghost outfit, a group show of work by Dan Flavin, Robert Janitz and Ralph Eugene Meatyard. Organized by Todd von Ammon, the exhibition will run from 19 October through 16 November 2014. Team is located at 83 Grand Street, between Greene and Wooster. Concurrently, our 47 Wooster Street space will host tl;dr, an exhibition by Cory Arcangel.

ghost outfit weds three artists who, despite generational gaps and disparate media, share a concern with material and conceptual duplicity. The pieces in the show use light and light-sensitive material to provide moments of both literal and figurative masking, in which an object’s surface acts simultaneously as barrier and point of access. Content and medium disguise one another, rendering the subject the camouflage itself – as well as the resulting obscurity.

Dan Flavin’s fluorescent sculptures resist corporeal definition: a piece’s intangible glow undercuts its own object-hood, posing unanswerable questions of where the work begins and ends. The act of illumination serves here to cloud perception, rather than to clarify, materializing new spaces and disrupting existing ones.

Robert Janitz’ oil paintings here take the same rough form: milk-white wax brushed in wide swaths to hide slightly visible black underpainting. Their composition recalls the streaks left by a squeegee on a pane of glass but, while window-washing serves to enhance transparency, Janitz’ brushstrokes create and foreground opacity, cloaking the painting with, of all things, its own paint.

Alchemic black and white photographs by Ralph Eugene Meatyard utterly confound their subject matter. The inexpensive plastic of a child’s toy appears identical to a tombstone’s weathered granite, while blurred streaks of light obscure the very water that reflects them. The artist’s camera acts directly counter to traditional expectations of the medium, seeking to shroud and transfigure, rather than to show or document.

Dan Flavin lived from 1933 to 1996. Celebrated in his lifetime, he has been the subject of major international museum retrospectives and is included in most major public collections.

Ralph Eugene Meatyard lived from 1925 to 1972. Little known in his life, he has since achieved significant recognition, with solo museum exhibitions including The Art Institute of Chicago and the de Young Museum of San Francisco.

Robert Janitz was born in Germany in 1962 and now lives and works in New York. Last February, he was the subject of a monographic exhibition at Team, his first with the gallery. A solo show currently hangs at Meyer Riegger in Berlin.