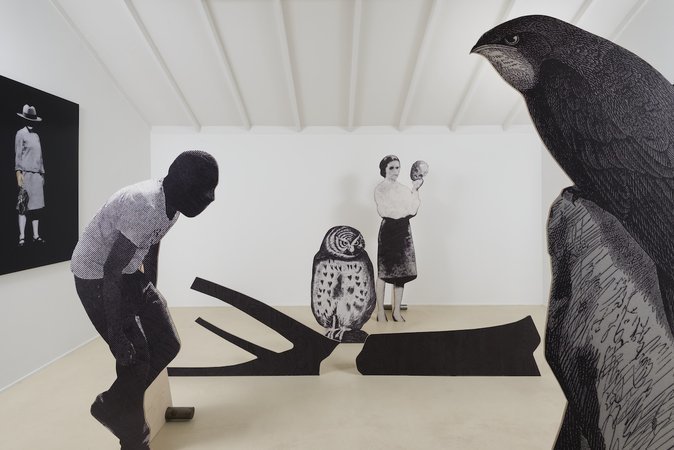 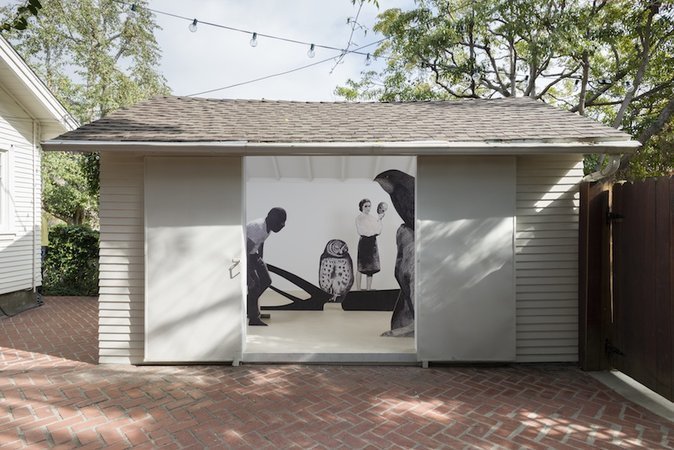 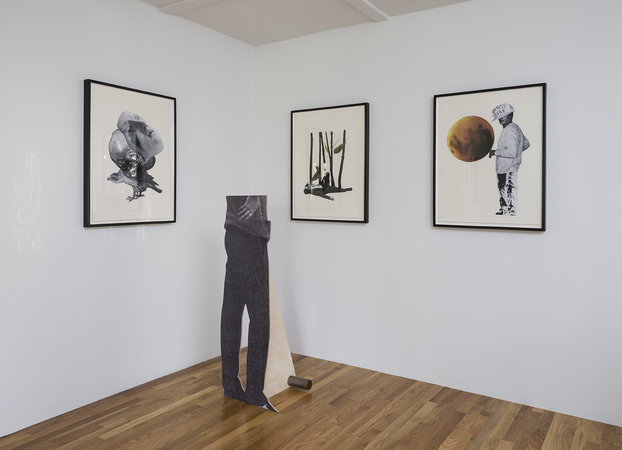 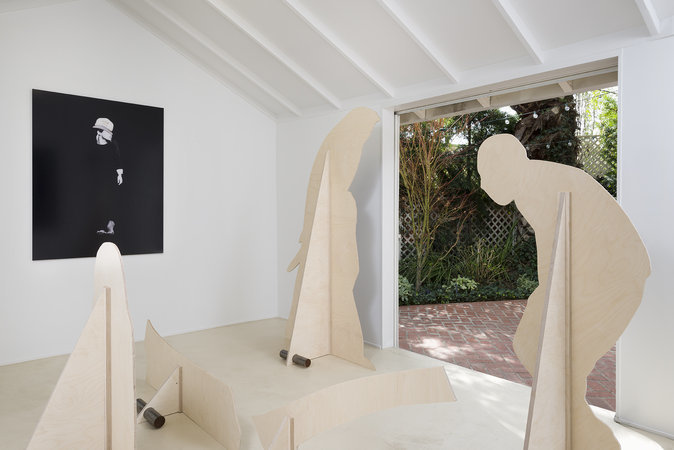 Team (bungalow) is pleased to announce a show by Berlin-based, Danish artist Jakob Kolding. Entitled Another World with Difficulties, the exhibition will run from 31 January through 06 March, 2016. Team (bungalow) is located at 306 Windward Ave in Venice, CA.

Jakob Kolding’s work takes public space as its subject: the ramifications of architecture and urban design, the ways in which the controlled environment influences behavior. For this exhibition, he has created an installation made up of life-sized wooden silhouettes of people, the fronts of which feature black-and-white lambda prints, while the backs are left unadorned, displaying the birch grain and structural supports. Highly recognizable modernist imagery is presented in the manner of shooting gallery targets, 19th century dioramas and carnival cutouts. The works are neither purely pictorial nor truly sculptural, and the tension between the expectation and actuality of presentation, between their simultaneous flatness and three-dimensionality, serves to defamiliarize their domestic setting, demanding from the viewer a constant navigation of his own spatial experience.

The figures, by evoking ingrained archetypes both contemporary and mythological, trigger in the viewer an immediate sense of recognition. This legibility points to our cultural tendency to transform human physicality into semiotic indicator, to understand bodies as reflections of character. While their scale and placement suggest actual people, their flatness, lack of color and visible contrivance render them hieroglyphs. Kolding’s gesture is theatrical, an efficient pantomime that forgoes interiority for the sake of exterior signs.

Kolding employs strategies of sampling and re-framing; his imagery is for the most part appropriated and collaged, frequently allowing recontextualization to serve as his primary intervening gesture. His visual vocabulary is varied in its influences and reference points – ranging from the isolated figure drawings of Robert Longo, to the artificialist illustrations of Toyen, to the constructivist designs of El Lissitzky. Often times promotion and advertisement provide raw material for the artist’s practice; the installation simultaneously exploits and reflects upon the polemical nature of propaganda – its power to politicize space and potential to actualize ideology – in order to interrogate the tendency of the built Capitalist environment to stifle and obliterate individualism.

Kolding has exhibited in museums and galleries internationally. These include The Museum of Contemporary Art, Chicago, IL; The Stedelijk Museum, Amsterdam, The Netherlands; The Frankfurter Kunstverein, Frankfurt, Germany; Fondazione Pastificio Cerere, Rome, Italy; Overgaden-Institut for Samtidskunst, Copenhagen, Denmark; Kunstverein in Hamburg, Germany; CCA Wattis Institute for Contemporary Arts, San Francisco, USA; The Museum of Contemporary Art, San Diego, California; and The University of Michigan Museum of Art, Ann Arbor. He is included in numerous public collections including The Museum of Modern Art in New York. This is the artist’s first solo show in Los Angeles.