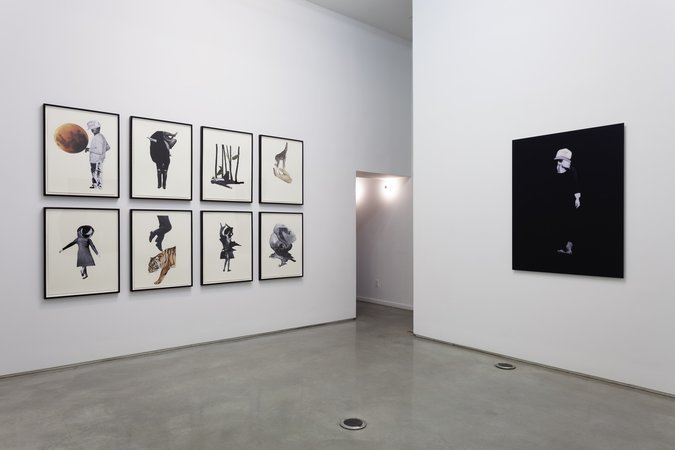 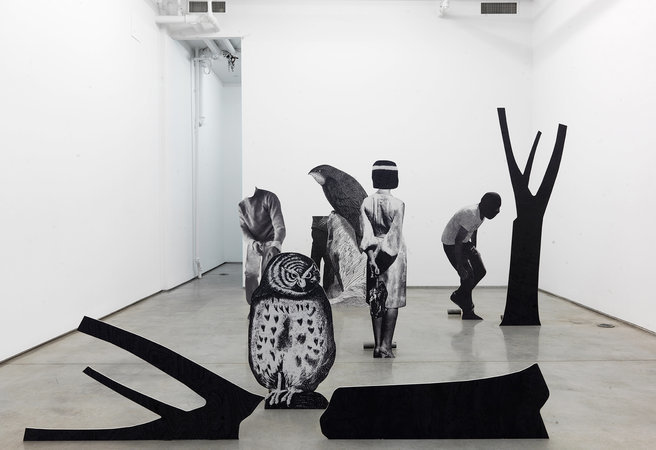 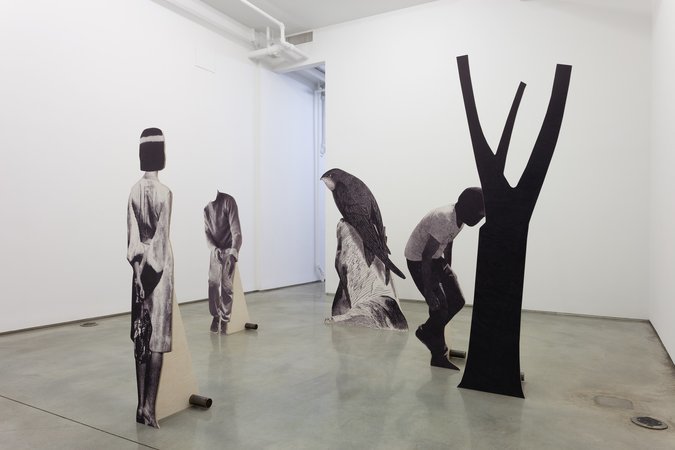 Team (gallery, inc.) is pleased to announce a show of new work by Berlin-based, Danish artist Jakob Kolding. Entitled World with Difficulties, the exhibition will run from 22 February through 22 March 2015. Team is located at 83 Grand Street, between Wooster and Greene. Concurrently, our 47 Wooster Street space will host Call with Information, an exhibition of new work by Suzanne McClelland.

Jakob Kolding’s work takes as its subject social, physical, psychological and political positioning. For this exhibition, he has created an installation made up of life-sized wooden silhouettes of people, the fronts of which feature black-and-white prints, while the backs are left unadorned, displaying the structural supports of the birch veneer. Highly recognizable modernist imagery is presented in the manner of shooting gallery targets, 19th century dioramas, carnival cutouts and theater sets. The works are neither purely pictorial nor truly sculptural, and the tension between the expectation and actuality of presentation, between their simultaneous flatness and three-dimensionality, serves to defamiliarize the white cube setting, demanding from the viewer a constant navigation of his own spatial experience.

The figures, by evoking ingrained archetypes both contemporary and mythological, trigger in the viewer an immediate sense of recognition. This legibility points to our cultural tendency to transform human physicality into semiotic indicator, to understand bodies as reflections of character. While their scale and placement suggest actual people, their flatness, lack of color and visible contrivance render them hieroglyphs. Kolding’s gesture is theatrical, an efficient pantomime that forgoes interiority for the sake of exterior signs.

Kolding employs strategies of sampling and re-framing; his imagery is for the most part appropriated and collaged, frequently allowing recontextualization to serve as his primary intervening gesture. His visual vocabulary is varied in its influences and reference points – ranging from the isolated figure drawings of Robert Longo, to the artificialist illustrations of Toyen, to the constructivist designs of El Lissitzky. The show takes its name from Aunt with Difficulties, a short story by Julio Cortazar in which the titular character is consumed by a worry that she will fall on her back, and be forever unable to stand back up. Likewise this exhibition is punctuated by a certain sense of fear of losing ones footing that dominate through out. The exhibition strikes a delicate balance between the literal and metaphorical, physical and psychological, and is political on both collective and personal levels.