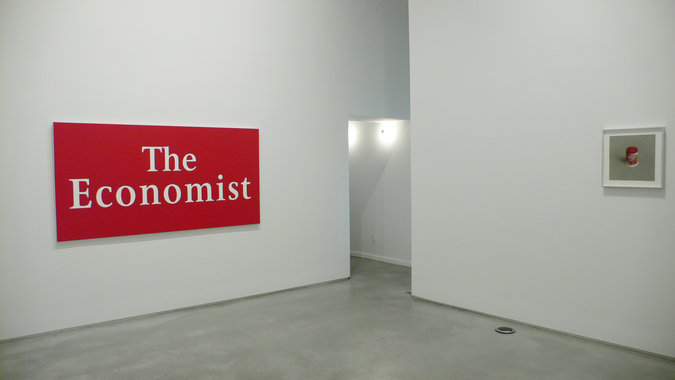 Team is pleased to present an exhibition of new work by Mathew Cerletty. Entitled The Feeling is Mutual, the exhibition will run from the 18th of October through the 24th of November 2007. Team Gallery is located at 83 Grand Street, cross streets Wooster and Greene, on the ground floor.

A selection of one dozen drawings and paintings make up this fourth New York solo by Mathew Cerletty, a 27 year-old artist whose practice can be said to sit firmly within the discourses of post-pop and post-appropriation. A container of strawberry Yoplait yogurt, a late 70’s publicity still of Jeremy Irons, and the cover of Wire’s 154 album are just some of the images that have been carefully selected, precisely rendered, and poetically transformed to erect a somewhat austere portrait gallery of cultural traces. All of Cerletty’s pictures, whether oil on linen or graphite on paper; whether figurative or text-based; whether wholly appropriated or entirely invented, are executed in an exacting manner.

But everything in Cerletty’s universe is slightly unhinged—it’s all a bit off. His is a world riddled with errors and inconsistencies, which, more often than not, lead to the possibility of a genuine and heartfelt engagement. For example, the typeface chosen for a drawing of the ‘’Diet Coke’’ logo is the wrong one, while the paint handling with which the artist has rendered ‘’The Economist’’ banner imbues the piece with an almost tremulous sensitivity. Cerletty’s quotations never trigger a waning of affect and it is surprising how much mystery resides in these crystal-clear, usually commercial, signifiers.

The ’’flaws’’ are what shift Cerletty’s works away from the purely mapped-out and mathematical and into the realm of the emotionally resonant. It is the poetic license that he frequently takes with these ’’real’’ things that begins to steer us away from fleeting irony and towards a feeling of sincerity, of commitment, and of urgency. The manner in which the artist sometimes misremembers makes an argument for these works as the fruits of a dreamed life of pop artifacts. Cerletty claims that some of these images just come to him—that his choices are not always the results of conscious thought processes—and this assertion is borne out more by the way in which his pieces deviate from Pop’s tenets than the way in which they adhere to that ideology.

The temporal/mortal aspect that underlines much of Cerletty’s art is foregrounded here by a pair of works that state a time on their surface—one drawing reads ‘’60 minutes,’’ while in another ’’1959’’ has been crossed out. These pieces highlight Cerletty’s concern with the commemorative and remind us of the perpetual tug of memory, of nostalgia, and of loss. The Feeling is Mutual indeed.

This is Cerletty’s first show at Team. We are grateful to Melissa Bent and Mirabelle Marden of Rivington Arms for their support in the organization of this exhibition and their generosity in lending us their artist.