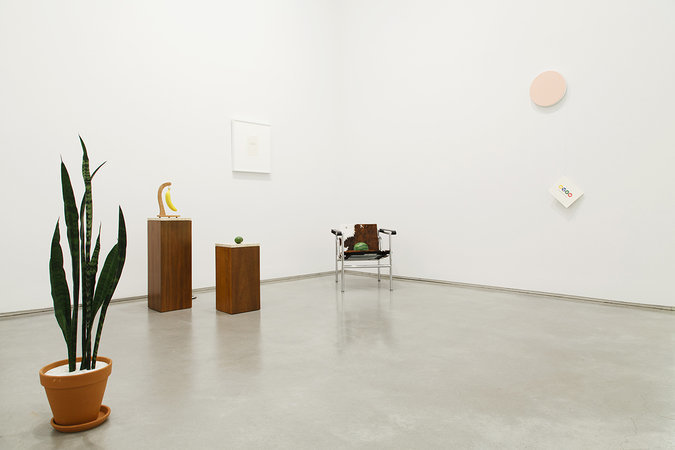 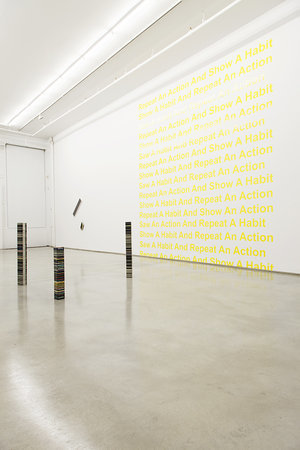 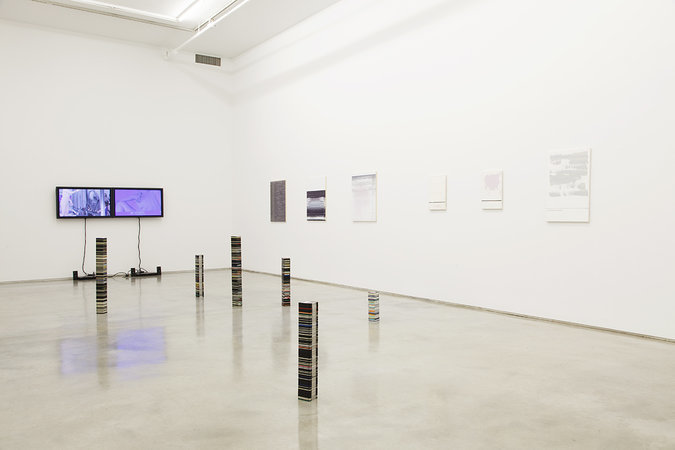 Parasitic Gaps explores the ways in which textual elements can be used to prop up, destabilize and misdirect meaning in the realm of visual art. While not all of the work in the show includes literal text, each artist is involved in the practice of mating separates in order to create a new meaning for both. Words here help to create a malleable space between the artist’s intention and the viewer’s reception.

In recent years, Matthew Higgs and Margaret Lee have exhibited their work together in two person shows, and continue their collaboration in the space’s back gallery. Higgs’s inclusions draw from two bodies of his work. The first consists of framed pages excised from various books. The text on the pages---invariably a book’s title page---is always simple, a pithy sentence (“thank you”), phrase (“with love,”) or even lone symbol (“$”). Removed from their literary contexts, the pages exist as a form of found, language-based conceptual art. In Higgs’s “Reading Paintings,” beloved books hang from geometric monochrome paintings by pieces of wire. While the paintings alone might appear brightly austere, the presence of the books creates the possibility that the paintings are only devices to display carefully chosen books. Margaret Lee places pieces of absurdist sculpture atop recognizable furniture, similarly altering the viewer’s experience of an otherwise domestic scene. The furniture is upscale and loaded---the sort of objects one might find in an art gallery or collector’s home. The sculptures, which often take fruit or vegetable as their subject matter, transform the furniture from objects of luxury into objects of ridicule.

James Hoff’s applications of text to form are sometimes visible, sometimes not. For his newest sculpture, the artist purchases used floppy disks and stacks them into towers. Previous owners of these disks often fail to erase them before their disposal, and some of the contained data is private: legal papers, financial documents, even diary entries. The text held by the dated digital storage format causes the work to leech meaning and value from the files. Hoff will also display paintings produced by taking digital photographs of gessoed panels, applying computer viruses to the files, and printing the distorted resultant images. These works consider the code of computer viruses as text, in a sense taking the malicious programmers as his unwitting collaborators. Another body of work, called “Syndromes,” pairs pieces of text with monochromatic abstractions. Each describes a syndrome, often with comical implications (“Uncomfortable Hair Syndrome,” “Social Media Remorse Syndrome”). The text is not meant to caption the image, but to interact with it.

Georgia Sagri’s work exists primarily in the egalitarian space in between artist and viewer, addressing the importance of the audience’s experience in creating meaning. Sagri has produced a large work consisting of vinyl wall text of repeated alternating phrases, each a meaningful variation on the others: “show a habit and repeat an action,” and “saw a habit and repeat an action,” for example. These works play upon histories of both experimental poetry and conceptual art. Sagri will also display a new video related to but separate from her recent installation and performance at MoMA PS1 titled “Williamsburg.” The video uses different recordings of the same matter, one taken in a recognizably DIY format on the artist’s laptop from inside of the installation, the other more professionally by a third party, from the perspective of the audience, thus presenting both an interior and exterior view. The footage shows Sagri writhing through the installation, wearing headphones playing field recordings made on the streets of Brooklyn’s Williamsburg neighborhood and reproducing those sounds herself. The result is a warped language made up of car noises, birds, and half-heard conversation, creating new textures and sounds using this grandiose Williamsburg identity. The video functions as promotion for her Williamsburg, as well as a call to action for the viewer.