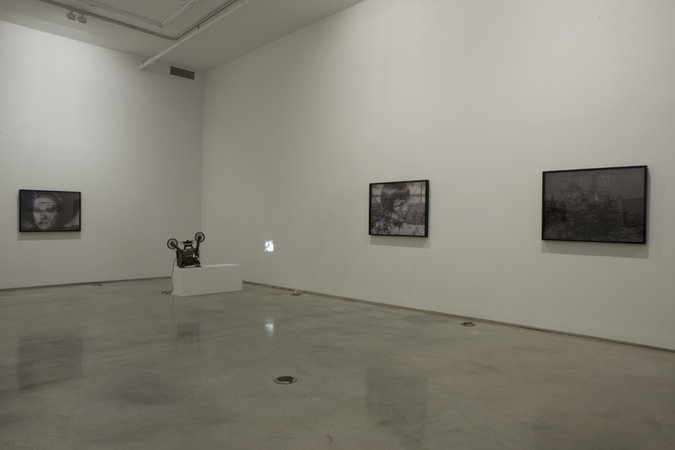 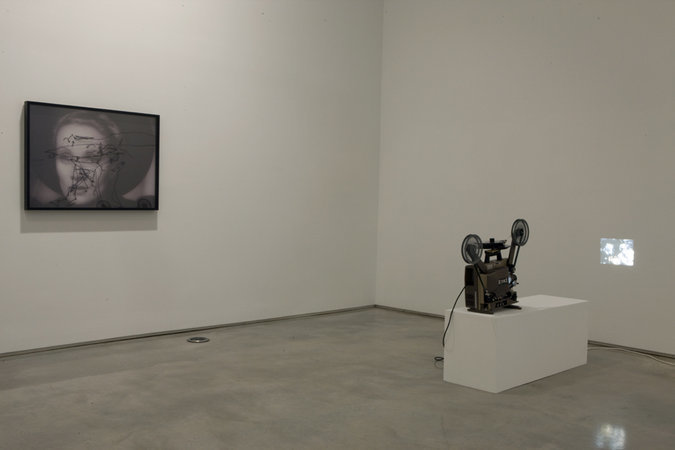 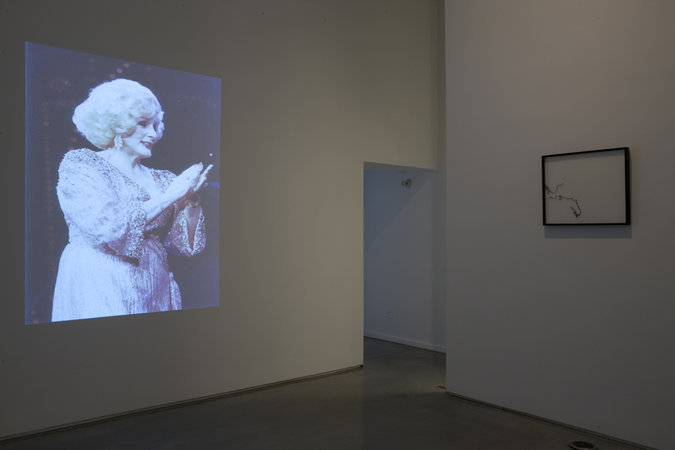 Team is pleased to present an exhibition of new work by the Brussels-based, French artist Pierre Bismuth. Entitled Following the right hand of…, the exhibition will run from the 2nd of April through the 2nd of May 2009. Team Gallery is located at 83 Grand Street, between Wooster and Greene, on the ground floor.

For his ongoing series, Following the right hand, Pierre Bismuth does just that. He projects a feature film onto a sheet of Plexiglas and painstakingly follows the movements of the lead actress’ right hand with a black marker. The resultant abstract drawings are then enframed over a 30 by 40 inch photographic print of a still image from the film. The image selected by the artist represents the moment that he disengages from the actress, sometimes near the beginning of the film, creating a simple drawing; but just as often near the end of the film, creating an aggressive thicket of marks that almost obliterate the filmic image. In this way, the motion picture is occluded by a chance pattern that constitutes a kind of messy signature made by the actress. There is an undeniably fetishistic aspect of this work, as a portion of its appeal is linked to the actress’s name and aura; at the same time, the focus on the squiggly marks paradoxically negates the film, along with its star, by obscuring them with black ink, frustrating our desire to connect with the screened image.

The likes of Joan Crawford, Marlene Dietrich, Greta Garbo, and Marilyn Monroe are re-animated in these strangely romantic artworks, wherein Bismuth holds hands with these women across a vast sea of time. These idols, who had diminished agency even in their most famous starring roles, are given a degree of authorial control through Bismuth’s conceptual interventions into film history. The women in Bismuth’s Following… series are not only the male artist’s subjects, they also participate in the authorship of the works. In a method that inverts the action of an artist like Jackson Pollack, Bismuth grants the subject the power to conduct his imprint and hence renders himself incidental, the simple facilitator of the séance.

Popular and high culture have provided the scaffolding for Bismuth’s practice. Over the years, political events, reportage, men’s magazines, Disney characters, fairy tales, the rituals of the white cube, museum architecture, and the didactic plate have all been implicated and re-dressed in a body of work that repeatedly returns to the discourse of appropriation for it’s guidance. However, no form of culture has been more present in Bismuth’s art than that of the motion picture, particularly work from the period of the Classical Hollywood Cinema.

Pierre Bismuth has been exhibiting his work for the past twenty years. Prominent monographic exhibitions have been held at the British Film Institute, the Kunsthalle in Basel, Nice’s Villa Arson, Rotterdam’s Witte de With, at MAMCO in Geneva, and at the Kunsthalle in Vienna. He has participated in group exhibitions at the Centre Georges Pompidou, the ICA in London, the Sprengel Museum in Hanover, Frankfurt’s Museum für Moderne Kunst, the Kunsthalle Bern; the Ludwig Museum in Köln, the Stedelijk Museum in Amsterdam, and numerous others. His work was included in the 2001 Venice Biennale and in Manifesta 4. Bismuth has had solo shows at galleries in such cities as London, Paris, Brussels, Turin, Tel Aviv and Antwerp.

It is exceedingly appropriate that Bismuth work with this material. After all, he is the only fine artist to have ever won an Academy Award — in 2002 for Best Original Screenplay with Michel Gondry and Charlie Kaufman for the film Eternal Sunshine of the Spotless Mind. This is his second solo at Team.