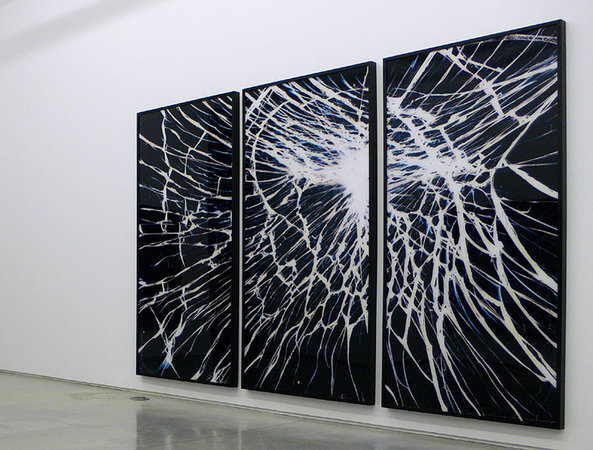 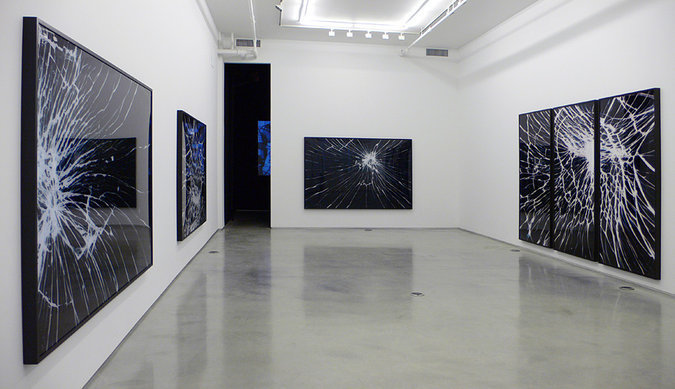 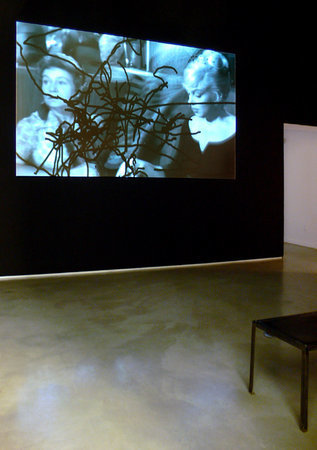 Team is pleased to present a show of new work by Brussels-based artist Pierre Bismuth. The exhibition will run from the 29th of March through the 30th of April 2007. Team Gallery is located at 83 Grand Street, cross streets Wooster and Greene, on the ground floor. Concurrent solo exhibitions will be held at the Mary Boone Gallery, both in their Chelsea space at 541 West 24th Street, as well as at their uptown space at 745 Fifth Avenue.

Pierre Bismuth is one of France’s foremost artists and a leading figure in conceptual art. Known for his intelligent dismantling of cultural products and the wry and often humorous shifts and ‘misuses’ to which he subjects his material, Bismuth’s work constitutes a creative intervention into familiar codes, habits and objects.

The exhibition at Team Gallery will feature the new and strikingly beautiful photographic series One man’s masterpiece is another man’s mess. These large-scale black and white photographs of shattered glass, with their intricate and sinuous spider web patterns, are evocative of the cracked Large Glass of Marcel Duchamp. Here however there is nothing behind the damaged pane—the only ‘masterpiece’ to be seen is the ‘mess’ itself. The images were created by first breaking empty glass slide covers, then photographing and enlarging the results. This procedure ironically transforms a standard material used to present images into images themselves, while also making the particular designs dependent on a (literally) chance collision.

One man’s masterpiece is another man’s mess is closely related to another work on display, Following the right hand of… In this latest installment of the series, the piece appears as a video projection rather than a still image. We watch a squiggly line being drawn onscreen as a classic movie unfolds, tracing the movements of the right hand of the main actress. In this way, the film image is gradually occluded by a chance pattern that constitutes a kind of messy signature made by the actress. There is an undeniably fetishistic aspect of this work, as a portion of its appeal is linked to the actress’s name (Marilyn Monroe, Audrey Hepburn, etc.); at the same time, the focus on the squiggly marks paradoxically negates the film, along with its star, by filling the screen with black ink.

For Mary Boone in Chelsea, Bismuth presents an innovative new creation that plays both with the notion of the readymade and the commercial aesthetics of pop art. In a curious reversal, the advertisement for the show itself becomes the featured artwork: the pages announcing the exhibition in the March issues of Artforum and Art in America (both front and back sides) are blown up to gigantic dimensions and take over the gallery space. Whereas normally the magazine serves as a vehicle of expression for the gallery, here the gallery becomes the vehicle for the presentation of the magazine. The artwork and its representation, object and publicity, are conflated. The advertisements themselves resemble color field paintings which, when enlarged, change from monochromes into polychromes as the colored dot pattern is rendered visible. Contingency plays an important part in this work as well: the gallery is made into the unlikely advertising agent of other galleriesÕ shows, shown on the reverse side of Bismuth’s own ads.

At Mary Boone on Fifth Avenue, street graffiti meets sixties conceptualism in Most Wanted Men, a series of artworks employing tags of famous contemporary artists over tourist photographs of New York. Combining media culture’s fascination with celebrities, graffiti art, and a reflection on the function of the signature, “Most Wanted Men” exemplifies one of Bismuth’s basic creative strategies: to make a work out of the structuring conventions of other artworks and mass media products in order to expose different mechanisms of visibility and meaning creation.

Pierre Bismuth was recently the subject of a book-length monographic study published by Flammarion Press. He has shown his work at numerous museums and foundations including the Centre Georges Pompidou in Paris; the ICA in London; Amsterdam’s Stedelijk Museum; the Sprengel Museum in Hanover; Frankfurt’s Museum fur Moderne Kunst; the Kunsthalle Bern; the Witte de With in Rotterdam and many, many others. He is represented by the Lisson Gallery in London, Jan Mot in Brussels, Sonio Rosso in Turin, and Cosmic Galerie in Paris. In 2002 he won the Academy Award for Best Original Screenplay with Michel Gondry and Charlie Kaufman for the film Eternal Sunshine of the Spotless Mind. His work has been included such renowned international surveys as Manifesta 4 and the 49th Venice Biennale.

This is Pierre Bismuth’s first solo show at Team. The three solo shows mark the first in the United States for Mr. Bismuth although he has been showing in Europe extensively for the past nineteen years.