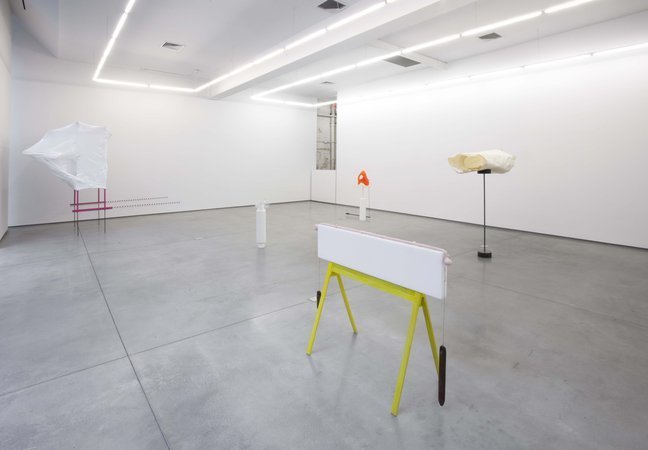 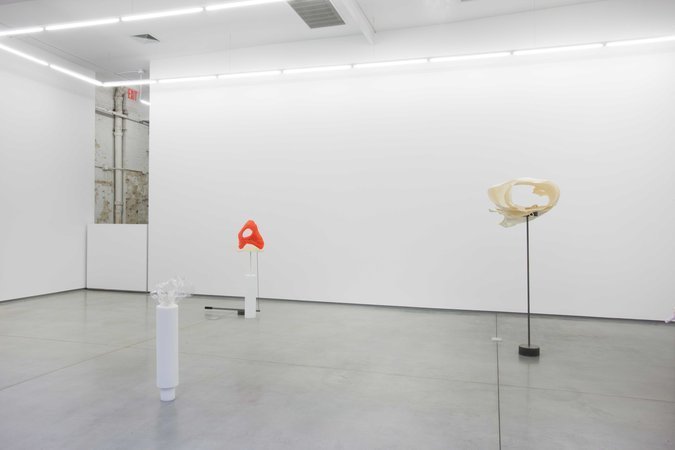 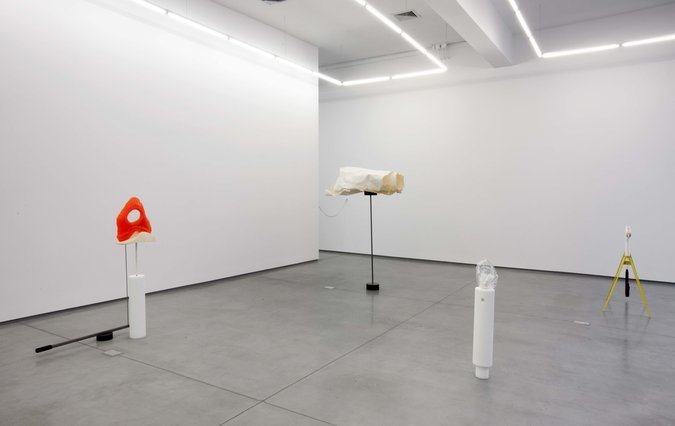 Five new sculptures make up Ross Knight’s sixth solo exhibition at Team Gallery. The works are traditional sculpture of human scale and consideration. For these idiosyncratic hand-made constructions, Knight misuses utilitarian materials, stripping them of their ordinary functions and marrying disparate elements in sophisticated singular structures. Neither formalist nor minimalist, though taking much from both schools, the pieces hinge on visual relationships formed when re-contextualized materials are shaped to touch one another in specific and suggestive ways.

The centerpiece of the show is a massive construction of steel and plastic, an outdoor work grandly housed in the gallery. Part is a cantilevered structure with the protruding consoles of a conveyor belt that stop short in space and an exaggerated steel elevation embellished with matte magenta paint; the entirety then suction-wrapped in opaque white plastic. With industrial coloring and packaging, Part seems vaguely functional, an object fluctuating constantly between its own installation and de-installation, like commercial units dissasembled and packed for shipment, or for disposal, or prefab architectural modules caught in mid-construction, on the sublime verge of realization.

Skin to weight is a formal structure of two circular steel weights connected by a tall iron rod upon which sits the rolled skin of half a cow. The slender pedestal resembles a spine held between discs supporting some core cavity of a body. The bleached rawhide, diaphanous and delicate, methodically curls into itself, skin embracing skin, with evocative tactility and meticulous balance.

In Cord, iron shafts hang from a wooden sawhorse fastened to an oversize block of plastic. Held together with string like a crude scale, spindly steel legs support suspended weights, both burden and value. While Part and Skin to weight consider the armature of skin — plastic or real, structure-revealing and structure-housing — both Cord and Skin to weight turn on oddly balanced relationships of volume and pressure.

Knight’s particular exploitation of materials also consistently relies upon sexual innuendo which is both sly and tremulous, in his push-and-pull and pole-and-hole configurations. Additionally, though Knight’s structures have many embedded lines of reference — the metal assemblages of Anthony Caro, the intersecting geometries of David Smith, the collaged installations of Kurt Schwitters, the corporeal erections of Matthew Barney, the ambiguous furniture of Franz West, and the wrapped objects of Christo come to mind with these pieces — the vocabulary of forms, and the unexpected ways in which elements encounter one another, is Knight’s own distinct signature.