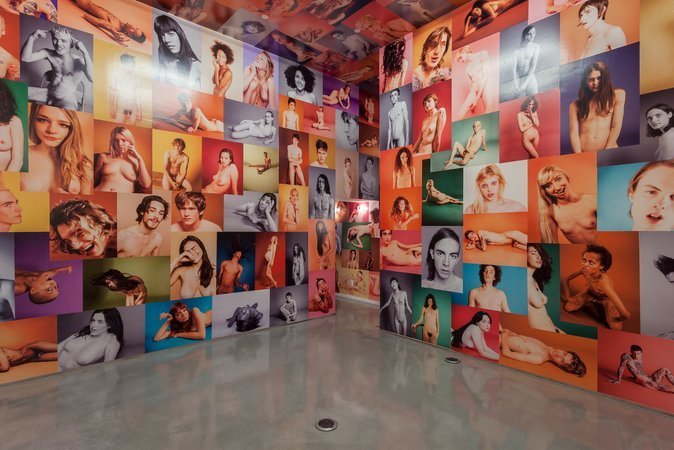 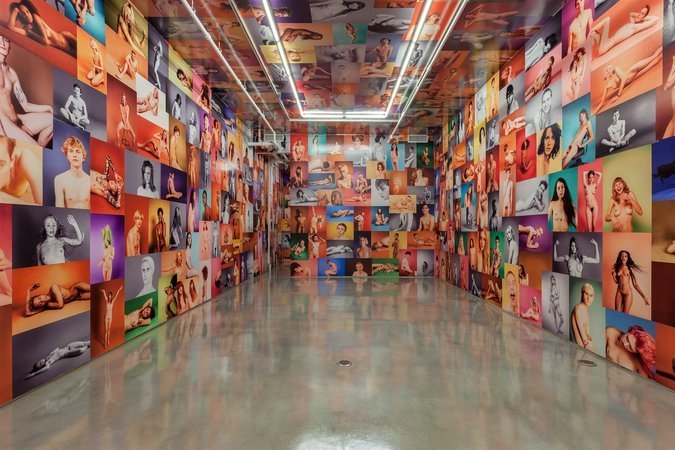 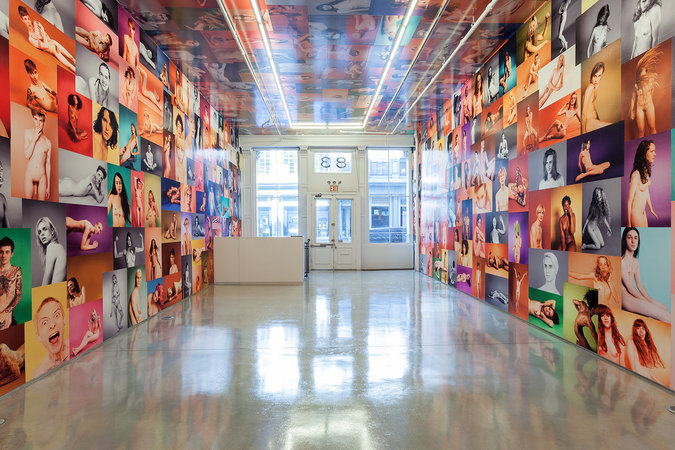 YEARBOOK is a single artwork that consists of over five hundred studio portraits of some two hundred models, always in the nude, printed on vinyl and adhered to every available inch of the gallery’s walls and ceilings. The installation’s effect is hugely impressive in its standalone visual power, an enveloping entity flooding the entire space with bold color and form. Although the sheer abundance of available images renders a total “reading” impossible, there is never any sense of incompleteness, as each individual image functions autonomously, granting the viewer access to a delicate, once-private moment.

The artist, who is primarily known for his outdoor photography, initially turned to the studio to establish a more classical context for himself and his models. He realized his desire to explore traditional black and white portraiture with his 2010 Team show Everybody Knows This is Nowhere. With YEARBOOK, he retains that sense of the historical, but subverts it so radically as to make it brand new. The use of candy-colored backgrounds – first introduced in Animals, his 2012 exhibition at the gallery – and the slick, poster-style production and presentation give the show a Pop art quality, making the already irresistible images all the more inviting.

These works are the result of the artist’s omnivorous attitude towards all manner of visual culture. From the vast swath of photographic history, to vintage nude magazines, to subway advertisements, McGinley’s inspirational material is quite diverse. The photographs exist at an intersection of the academic and the deeply felt – his intuitive sense of people and his extensive, ingrained knowledge of art history are equally necessary to his creative act.

McGinley’s works have deeply permeated the fabric of popular imagery to become foundational touchstones for our very perception of the modern world. The YEARBOOK project – which began in 2008, three years prior to the advent of Instagram – compartmentalizes, confuses, celebrates and categorizes the carnal. Throughout his career, the artist has repeatedly broken down distinctions between the public and the private. Here, he has employed techniques of mass commercial image production to realize what is a profoundly personal vision.

The macrocosmic effect of the artwork, of this constellation of people, is one of emotional and aesthetic synergy. The “posters” physically overlap one another, evincing a sense of unity between images. Like all McGinley’s pictures, they are characterized by a unique temporal tension: they are strongly contemporary, but create and capture a paradisiacal ideal that is timeless. The artist’s ability to make the fleeting permanent is virtuosic; these photographs are characterized at the deepest level by a euphoric optimism. You get the feeling you could spend a happy eternity marveling at the grandeur of these seemingly limitless bodies.

Ryan McGinley, at 36 years old, has been the subject of numerous international monographic exhibitions over the past ten years, including solo museum shows at The Whitney Museum of American Art, the Kunsthalle in Vienna, MUSAC in Léon, Spain, and MoMA PS1 in Long Island City. Group appearances include the Schirn Kunsthalle in Frankfurt, the San Francisco Museum of Modern Art, MoCA in Los Angeles, The Brooklyn Museum, Washington’s National Portrait Gallery, Ullens Center for Contemporary Art in Beijing and the MACRO in Rome. Last year, he was the subject of a career survey at South Korea’s Daelim Museum, as well as gallery solos in Paris and Hong Kong.