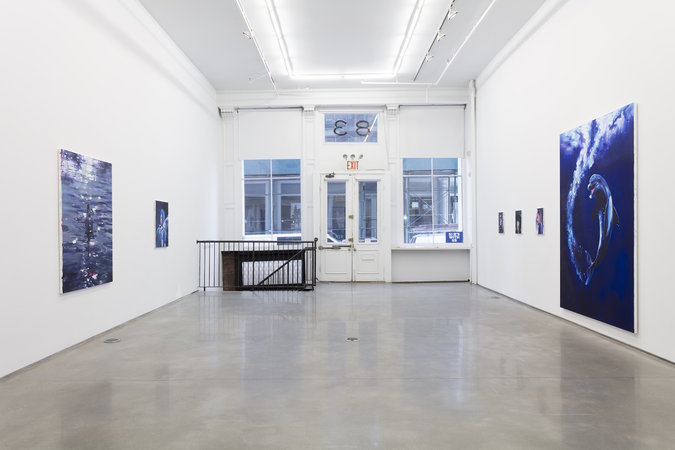 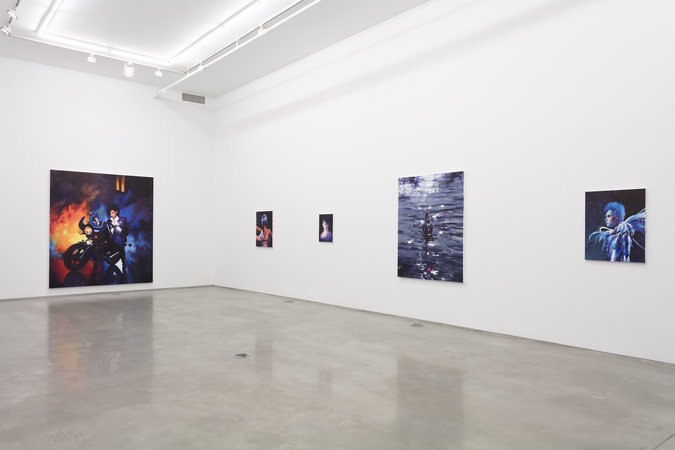 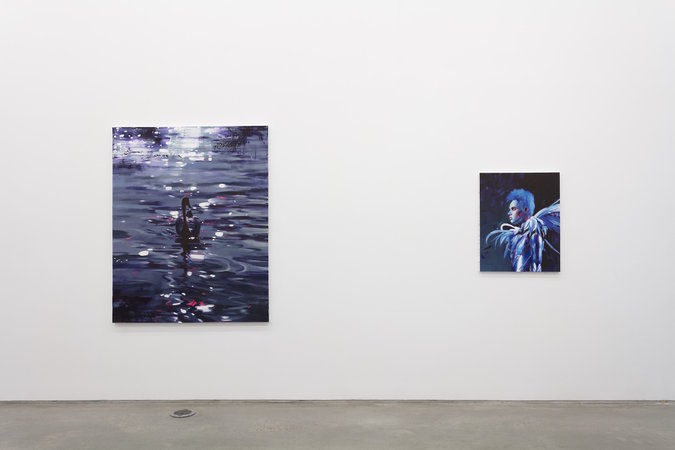 Team (gallery, inc.) is pleased to announce a solo show of work by American painter Sam McKinniss. Entitled Egyptian Violet, the exhibition will run from 13 October through 12 November 2016. Team Gallery is located at 83 Grand Street in New York.

For this exhibition, Sam McKinniss presents a collection of brand new figurative paintings, each tense with mutually symbiotic intimations of seduction and dread – a conflation positioned here as “queer.” Simultaneously melodramatic, campy, operatic (all coded terms associated with the homosexual), McKinniss’ pictures follow a trajectory from the sentimental to the morbid; from the celebratory to the debased. The works portray recognizable images, oftentimes with a nearly hysterical emotionality, lithe bodies sampled from a variety of sources. The exhibition’s title, Egyptian Violet, refers to an oil pigment used in each of its constituent paintings, a flexible shade of purple that may read as dark – almost black – or pale and translucent, depending on its preparation and application. McKinniss relies on this color for its elasticity and multifariousness, its capacity for manifold, multi-hued emotional resonances.

McKinniss forges a symbolist vocabulary for contemporary figurative painting; he culls his source material primarily from online image searching, an intuitive process by which he reveals the relational network of his own media-saturated consciousness. Seemingly disparate pop cultural icons are portrayed without cynicism in the artist’s fluent painterly style. Via this earnest, elegant rendering, he draws out his subject’s shared, seemingly contradictory characteristics: each work is charged with simultaneous masculinity and femininity, the languid threat of violence and a sense of stoic ostentation. The artist’s abiding interest is in moments of unexpected emotional intersection, his bodies always taut with aggression and sexuality, defensiveness and vulnerability, pathos and humor.

The paintings in the show evoke an onslaught of visual associations, both Art Historical and otherwise, each piece fraught with the anxiety and romance of Film Noir, the luxuriant eroticism of the Rococo, the deathly theatricality of Carravaggio, the self-reflexive alienation of Bertolt Brecht. Of particular precedential importance to McKinniss’ practice are the works of Henri Fantin-Latour, a figurative French painter of the 19th Century. The latter artist – who worked in a conservative representational style, frequently copying the works of old masters – is best known for his floral still-lives, as well as portraits of both contemporaneous artists and historical figures. Both McKinniss and Fantin-Latour work as cultural alchemists, sublime pasticheurs, seeking to access and distill the magic and pathos of Symbolism while limiting themselves to the knowable world – quotidian, observable reality – which places them in uniquely blurred authorial positions: each is at once consumer and creator, curator and originator, spectator and carnivore.

Sam McKinniss has been featured in numerous group shows both stateside and abroad. This is his first show with our gallery in New York.