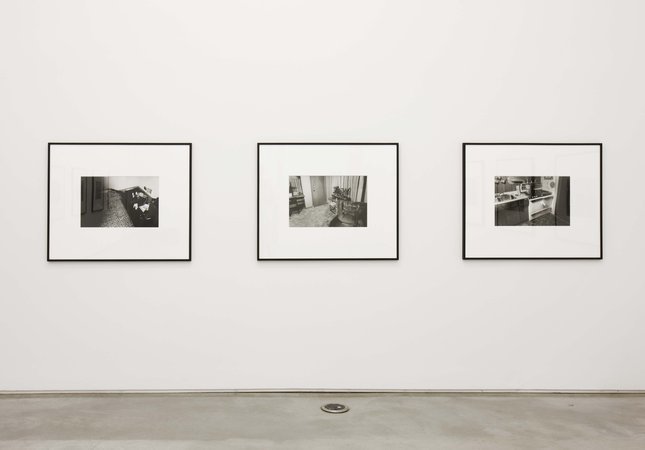 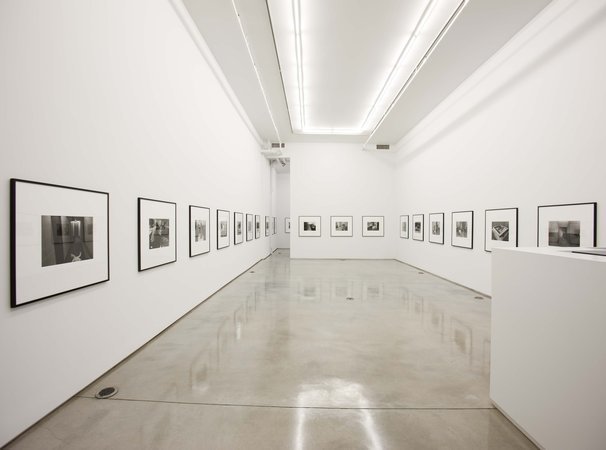 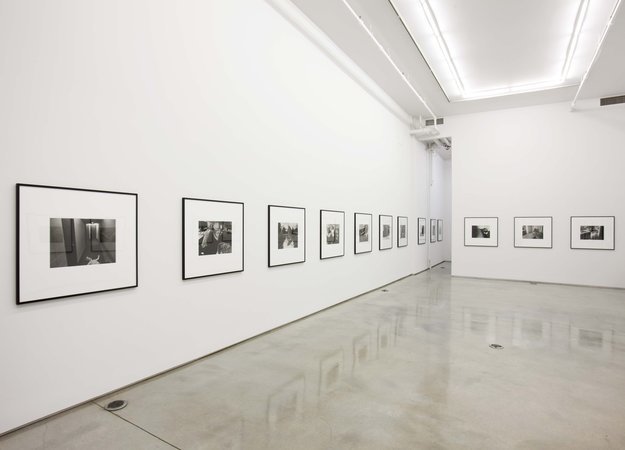 Team is pleased to announce our first solo presentation of work by American artist Sam Samore, with separate exhibitions installed in each of the gallery’s spaces. Both shows will run from 12 September through 28 October 2012. Our 83 Grand Street location, cross streets Wooster and Greene, will house 1973, an exhibit of small-scale black and white photographs. 1973 consists of selections from two historical bodies of work made by Samore in the eponymous year: The Suicidist, a widely exhibited collection of images and arguably the artist’s best known, and The Murdered Brother, a never-before-seen series. Concurrently, our 47 Wooster Street space will present Library of Appearances, a second show by Samore made up of new large-scale color photographs.

The Murdered Brother centers on a partially inflated rubber glove that has been choreographed into various positions suggestive of crime scenes within a conventional suburban household. The glove, whose phantom fingers are occasionally distended with air while at other times depressed by a lack thereof, is cast alone and framed in banal yet cinematically suspenseful scenes — sucked up by a vacuum cleaner, fallen inert amid a pile of shoes on the ground, partially jammed in an overstuffed suitcase, caught between the rim and the seat of a toilet bowl. Is the glove attached to a body? Are there other signifiers of bodies hidden somewhere within the mise-en-scene, as yet undiscovered? Are there hands located inside these gloves which are driven by their own wills? Are these production stills from horror films? Exactly what genres are at play? What fetishisms.

Wielding a related breed of macabre and ambiguous tale-telling, Samore frames himself as the subject of his absurdist, noirish series The Suicidist. Each picture is a death fantasy self-portrait, and the work nears typology in a filmic framing of types of suicides that, in some cases, border on ridiculous and impossible. Death by sandbox, death by telephone cord noose, death by plummeting down a children’s slide, death by something that happened with a knife in a garage, death by hanging upside down from a tree, death met under the tires of a car without a driver. The subject of the suicides is a long-haired, bearded, and bespectacled hippie-type, often in a dirty shirt and well-worn pants, a young artist encapsulated in his own romantic myths. He always dies alone, an anti-hero without a chorus of lamentation. Passionate self-destruction and self-transformation is the emotive act of an artist — a man so out of touch with everyday life as to make art and endow trust in its residue.

The fictional undertakings of fratricide and suicide frame a victim, a scene, a narrative, a picture, and allow the viewer to be both witness and investigator. These are emotionally charged scenarios, perhaps born in part from Samore’s university studies in Psychology. The artist’s early bodies of work come out of Conceptual Art and, as such, are closely aligned with cinema and narration. Samore doubly exploits and merges Hollywood tropes of melodramatic crime fiction and suspension of disbelief with Conceptualist conventions of artist performance and deadpan documentation.

In The Murdered Brother, Samore repeatedly assasinates an elementary object that acts as a stand-in for a complete body. As with Minimalist sculpture, the pared-down part represents the whole, and seriality gives the subject its weight and harmony and, in Samore’s case, its black humor. By repeatedly rehearsing the various scenarios of death and dismemberment, Samore enacts the repetition and simplicity of Minimalism and Conceptualism while darkly and wryly questioning the camera as a reliable index of the artist’s actions and accounts. This particular parody refers to other kinds of fictions and, significantly, other kinds of deaths: the death of a kind of photography so dependent on conceptual rigors as to focus on method, thereby killing the story.

Sam Samore has been exhibiting his work for the past forty years. Prominent monographic exhibitions have been held at De Appel in Amsterdam, P.S.1 MoMA in New York, Casino Luxembourg, and the Kunsthalle Zürich. Samore also participated in the 46th Venice Biennale, the Istanbul Bienniale 2007, and the Tirana Biennale 2005. The artist has had recent solo gallery exhibitions in Brussels, Berlin, and Paris.