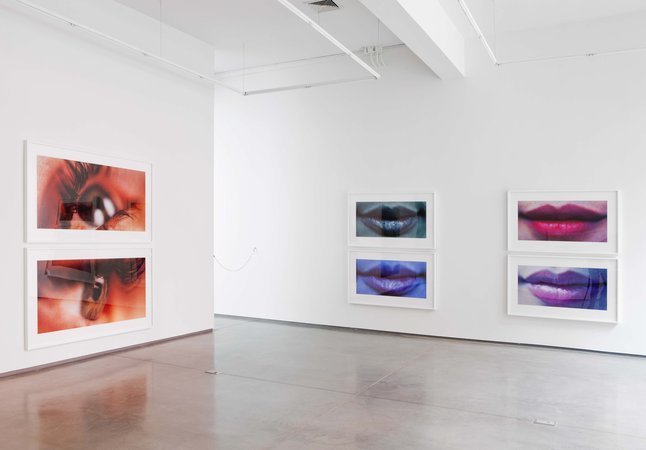 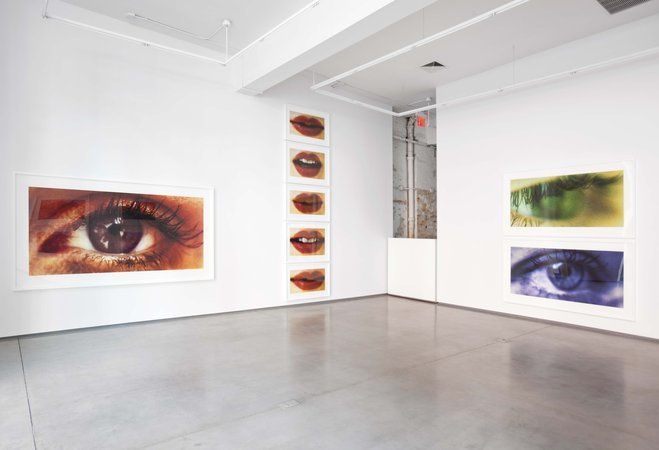 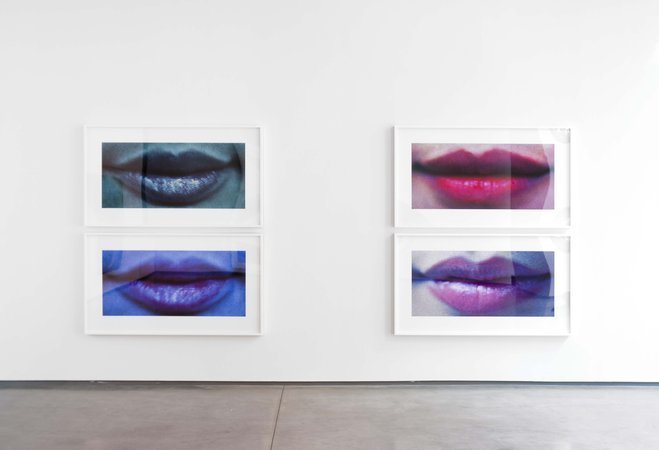 Team is pleased to announce our first solo presentation of work by American artist Sam Samore, with separate exhibitions installed in each of the gallery’s spaces. Both shows will run from 12 September through 28 October 2012. Library of Appearances presents new large-scale color photographs at Team Gallery’s 47 Wooster Street location, cross streets Broome and Grand. Concurrently, our 83 Grand Street space will present 1973, a second show by Samore made up of selections from two historical bodies of work.

Sam Samore’s new works are immensely scaled and fauvist-colored photographs of lips and eyes, presented singularly as well as grouped vertically into pairs and towers. The dramatized and disembodied facial features are mythical reconstructions of the sculptural bust and the filmic close-up that are part-cinema and part-painting.

The isolation of facial features, including lips, chins, eyes, eyebrows, and ears, is a working paradigm Samore employed most notably in his 1990s photographic series Allegories of Beauty (Incomplete) and begun ten years earlier with the black and white series entitled Situations. The enlarged, grainy photographs of Allegories are systematically produced in horizontal cinemascope aspect ratios and feature Minimalist hallmarks of isolation, coordination and objectification of fetishized parts. The zooming in, close cropping, blowing up, and cobbling together of specific facial features are actions, akin to Minimalism, of severe coordination and objectification of discrete units.

Lips and eyes are sites of sensation and fixation, erotic zones, places of consumption and fetish. The lips are heavily glossed and the eyes are darkly lined. These are the enhanced and amplified fragments of a woman made-up for the screen — a model, actress, or film star, to be gazed upon. The cinema too is a place of fixation and fiction. Many of the lips in the show are parted just a sliver, enough to release a silent breath or a whisper. The shadowy eyes are abstracted surfaces scumbled with grain, light, and reflection. Samore applies a romantic softness, painterly coloration, blur of movement, and film grain, which lend a sculptural physicality to the photographs and give the pieces a subtle and strange eroticism. These signifiers of desire, the lips and the eyes, suggest Surrealism’s fundamental tenet that forms carry a superior reality.

Samore’s new cinematic pieces evoke the notorious scene of Luis Buñel’s Un Chien Andalou in which a man holds an actress’ eye open and slices it in half with a razor. These photographs also share a lustrous painterly quality with the shiny pictures of Marilyn Minter, while also harkening back to the uncomfortable and amorphous fleshy configurations of John Coplans, where the human body is a site in flux that is able to speak to photography’s fictions. The floating, leering lips of Man Ray also come to mind (Ray obsessively reproduced the lips of the lover who left him in both painting and photography) and the glassy, cloud-filled eye as landscape of René Magritte.

Sam Samore has been exhibiting his work for the past forty years. Prominent monographic exhibitions have been held at De Appel in Amsterdam, P.S.1 MoMA in New York, Casino Luxembourg, and the Kunsthalle Zürich. Samore also participated in the 46th Venice Biennale, the Istanbul Bienniale 2007, and the Tirana Biennale 2005. The artist has had recent solo gallery exhibitions in Brussels, Berlin, and Paris.