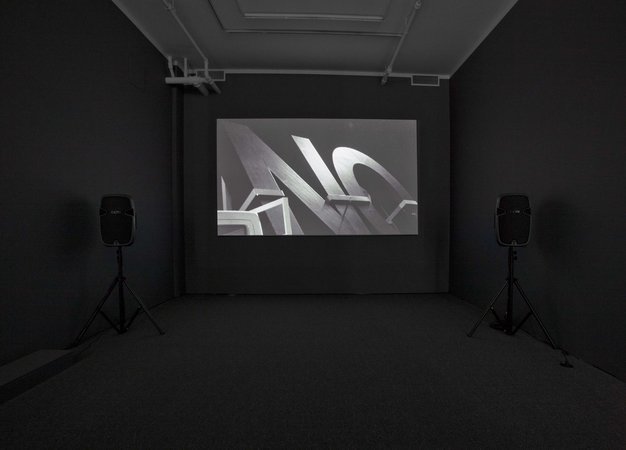 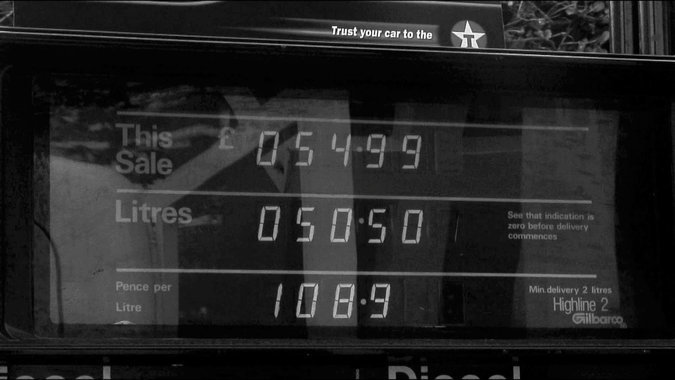 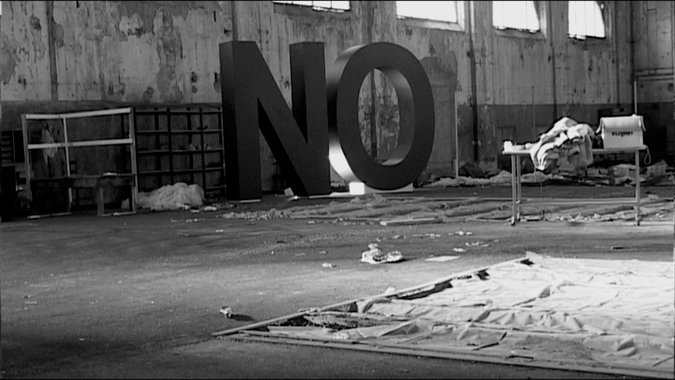 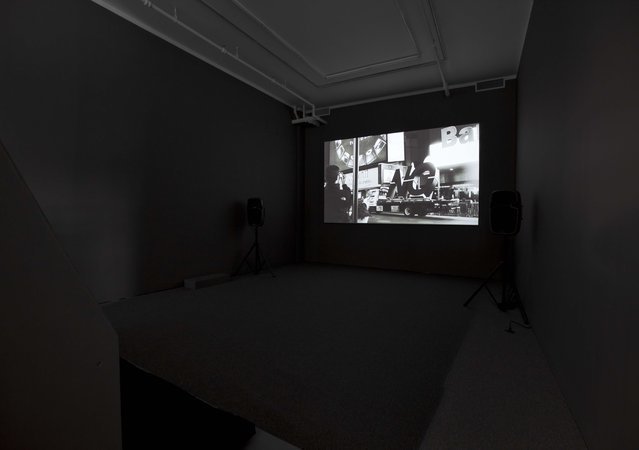 Team is pleased to present a feature-length film by Spanish artist Santiago Sierra. The exhibition will run from 07 June through 27 July 2012. We are located at 83 Grand Street, cross streets Wooster and Greene, on the ground floor. Concurrently, our 47 Wooster Street space will house a show of new work by Gardar Eide Einarsson.

Santiago Sierra commissioned the construction of a monumental sculpture of the word “NO” in a generic bolded sans serif typeface. Sierra then sent his sculpture on tour. Crossing most of Western Europe, the Eastern United States and touching down briefly in Japan, the six-foot tall, fourteen-foot wide negation is the protagonist of Sierra’s road movie. The film employs a soundtrack of incidental environmental sound, along with the blurred faces and the stark black and white palette characteristic of Sierra’s work. This exhibition consists solely of the 123 minute long film which documents the sculpture’s movement. It will be screened four times per day: at 10 AM, 12 PM, 2 PM, and 4 PM. A fifth screening will be added on Friday evenings, beginning at 7 PM.

The NO sculpture distills the artist’s practice of site specific artworks into a single simple gesture adaptable to a variety of settings. As the sculpture travels, its meaning changes with its setting. In effect, it becomes an actor, a hero, an absurd movie star, interacting with and commenting upon its various surroundings. The film chronicles both the various installations of the sculpture and its transport, down to details as seemingly mundane as the refilling of the truck’s tires or its passage through tunnels in Italy. We find ourselves unexpectedly compelled, frustrated by the sculpture’s hardships, becoming invested in the object as a character.

The sculpture’s tour began in the Napoleonic stables in Lucca, Italy in July of 2009 without any schedule or itinerary. After a two-month long residence there, it commenced travel to Berlin in a tow-truck small enough to drive legally on any road. Over the course of the next year it would visit a diverse array of cities, including Milan, Rotterdam, Brussels, London, Salamanca, Detroit, Nagoya, and Miami Beach. In Toronto, the sculpture stands in the middle of a square, where groups of shouting young people pose in front of it for photographs. In Detroit, a homeless man ignores it as he begs the crew for change. At Madrid’s ARCO art fair, onlookers, among them Spain’s Prince Felipe, gawk as the men unload it from a truck. In Washington D.C., it stands in front of American University while a gardener tends to the surrounding lawn.

The two-ton NO’s physicality is significant to the film. At certain points the camera shifts its focus to reveal how the word imprints itself on its various environments, showing its shadow on the side of the highway or its reflection in storefront windows. Even when the sculpture is not on screen, we are strongly aware of its presence. When the camera pans to a man scratching tabs off his lottery ticket in Germany, or a plaque of Vladimir Lenin’s face in Russia, the viewer cannot help but think “NO.

Over the past twenty years, Santiago Sierra has exhibited widely in Europe and the Americas, and has been the subject of numerous solo presentations in museums and galleries, including London’s Tate Modern; Mexico’s Museo Rufino Tamayo; the Konsthall in Stockholm; Hannover’s Kestnergesellschaft; the Kunsthaus Bergenz in Austria; and at Kunst Werke in Berlin. His work has garnered him international acclaim, and in 2003 he represented Spain at the 50th Venice Biennale.