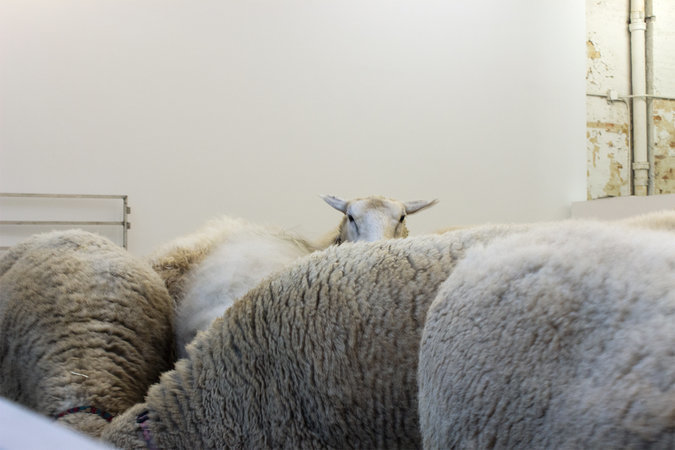 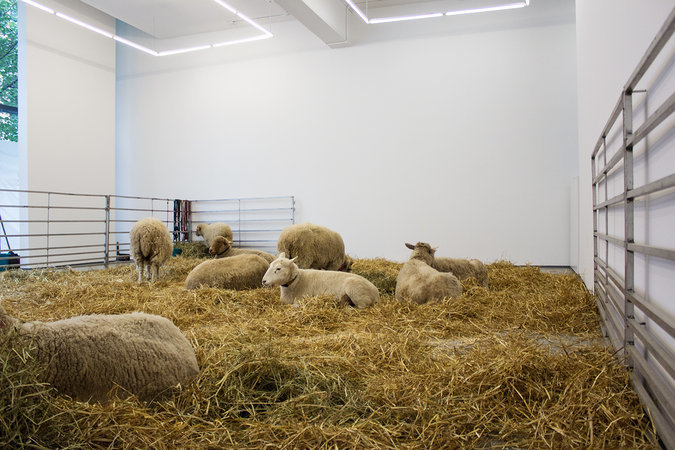 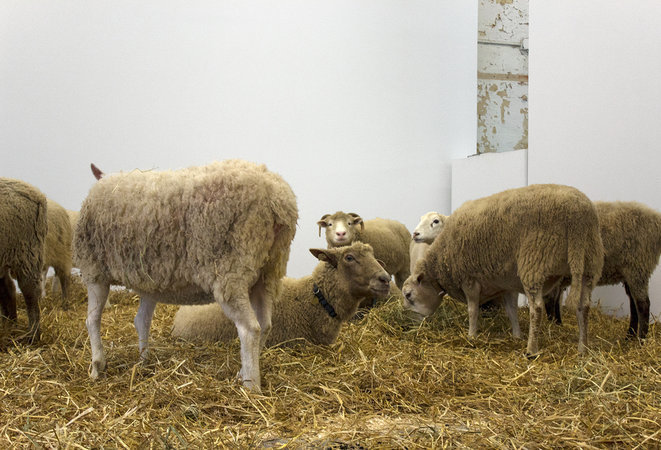 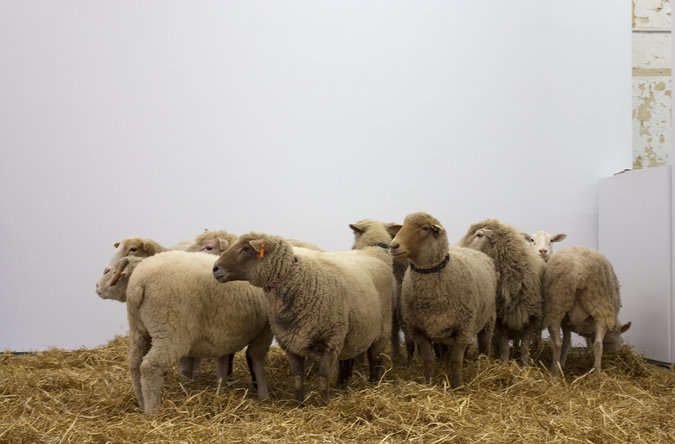 Team (gallery, inc.) is pleased to announce a new performance by Santiago Sierra. The Flock (El Rebaño) will take place on 01 November 2014 from 10am to 6pm. Team is located at 47 Wooster Street, between Grand and Broome. Concurrently, our 83 Grand Street space will house ghost outfit, a group show of work by Dan Flavin, Robert Janitz and Ralph Eugene Meatyard, organized by Todd von Ammon.

For this performance, Sierra fills the gallery with a herd of live sheep, an action that references Luis Buñuel’s 1962 film El Ángel Exterminador (The Exterminating Angel). The film’s central narrative follows the bourgeoisie guests of a lavish dinner party, who become inexplicably trapped in the hosting mansion’s parlor. A pair of sheep – originally hired as entertainment – break free from their bonds and enter the room, only to be slaughtered, roasted and ingested by the starving party-goers. Summoning Hobbesian theories of the state of nature, Buñuel addresses the rapidity with which mankind jettisons first world pretentions of civility, degenerating into orgiastic violence in the face of need.

In Sierra’s performance, the bellicose presence of livestock exploits our discomfort with the convergence of product and production. This context – the close quarters of a Manhattan art gallery, rather than a far-away rural pasture – forces us to consider our total commodification of the species. We use up the whole of the sheep – its muscles and fat become meat, its wool clothing. By eliminating the estrangement we expect, Sierra instills in the audience the guilt inherent in encountering a life whose sole purpose is to provide a service. The artist’s historical concern for the human bodies dehumanized and exploited by the controlling classes finds a clear echo here. The metaphoric leap to Sierra’s early performances, particularly those centered around migrant laborers or prostitutes, is both subtly elegant and brutally obvious.

Most livestock eat and drink in the immediate vicinity of their own excreta, acting directly counter to our societal predilection to divorce consumptive acts from their resultant waste – a standard we strive for at any cost. Their concurrence, framed by an art gallery, is meant to activate a latent shame, disabusing us of the denial with which we treat our filth. Confronted with the sight and smell of feces and urine, we see our essential similarity to the creatures responsible: humanity itself, reflected in excrement.

Over the past twenty years, Santiago Sierra has exhibited widely in Europe and the Americas, and has been the subject of numerous solo presentations in museums and galleries, including London’s Tate Modern; Mexico’s Museo Rufino Tamayo; Magasin 3 Konsthall in Stockholm; Hannover’s Kestnergesellschaft; Belgium’s Museum Dhondt-Dhaenens; the Kunsthaus Bregenz in Austria; the Kunsthalle Wein; Birmingham’s Ikon; and at Kunst Werke in Berlin. His work has garnered him international acclaim, and in 2003 he represented Spain at the 50th Venice Biennale.

This is the first of several performances by Sierra that will take place at Team over the course of this season. This event takes place on Saturday, 01 November, from 10am to 6pm.