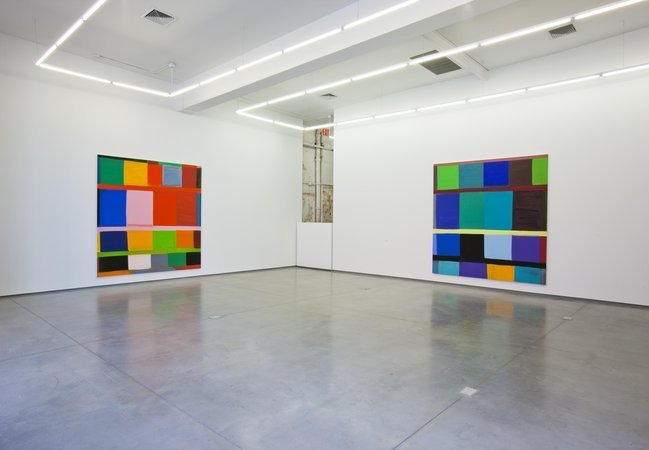 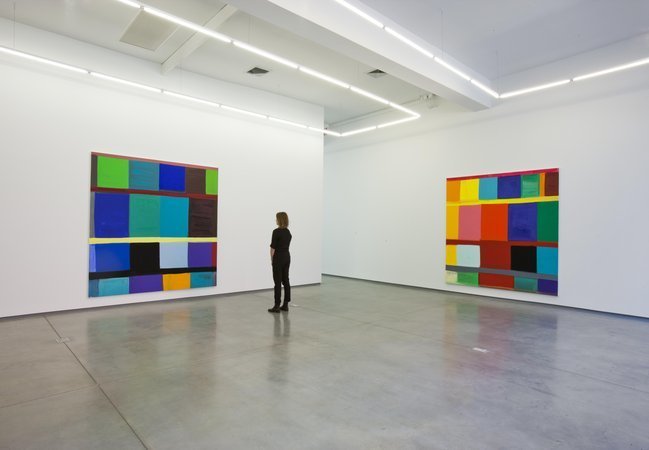 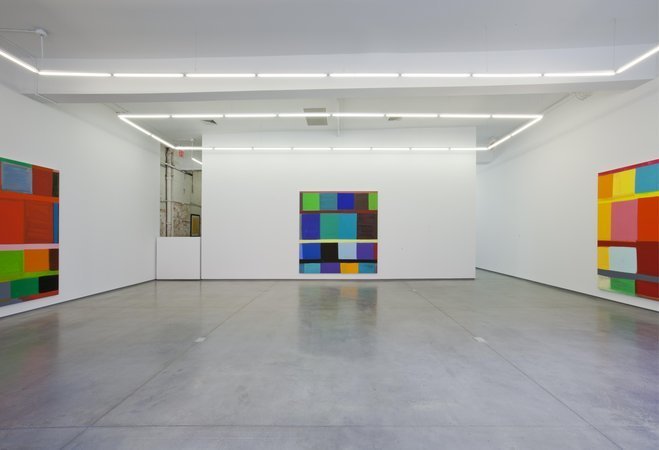 For his second solo exhibition at Team Gallery, Stanley Whitney presents three new large-scale paintings crowded with spirited and seductive colors. The 8-foot square canvases adhere to the artist’s decades-old compositional approach of loosely gridding square-like shapes marked off into irregular proportions by quick horizontal ribbons. The paintings have vigorous speed and heat, loaded with the intensely personal and contextual exeriences of color. The way the pigmented boxes flirt and touch each other parallels the exuberant manner in which they bend, bump, and bulge to the brim.

How do you paint the most color? Whitney attempts to answer that question with every painting. The artist traces the origins of his current methodology back to a trip through Egypt in the early ’90s. There he discovered the immense density offered by the edge-to-edge arrangement of the massive bricks of ancient pyramids. From this architectural experience, Whitney developed his idiosyncratic practice of building blocks of color in a semi-sculptural style, constructing deeply-hued units – each its own compact Color Field painting – that sit between surface and depth, ritual and the irregular.

Whitney’s obsessive dedication to color – color as content; color as movement; color as human experience – has never been so clearly mapped out as it is in these large canvases. There is bodily gesture and activity that can be re-traced in the squares and bands with which the pictures are structured. The paintings contain a shuffling, physical quality that is both sensuous and impure. Ugly inky neutrals (muddy browns, drippy blacks) have a lusty, carnal magnetism, while pretty pastels (lavender, coral, robin’s egg) are imbued with awkward proportions and peculiar brushstrokes.

The paintings’ musical and often poetic titles proffer an ambiguous relationship to the vocal and sonic attributes that paint and color share with language and meter. Whitney’s colors beat like spoken words or concrete poetry with accent, tempo, and pulse. The artist describes his work as polyrhythmic, containing multiple conflicting cadences. Whitney’s paintings follow a highly sophisticated and irregular pattern, developed to allow for the coinciding, booming resonances of discrete color to cross and connect in a deeply affecting harmony that is never resolved.

Whitney was born in 1946 and has been exhibiting his work since 1970. His work has been shown at museums including the American Academy of Arts and Letters, New York; the Institute of Contemporary Art, Philadelphia; the Nelson-Atkins Museum of Art, Kansas City; the Orange County Museum of Art, Newport Beach; and the Studio Museum in Harlem, New York.