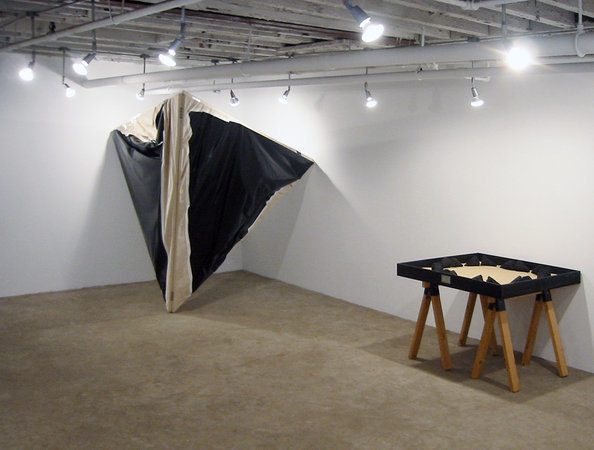 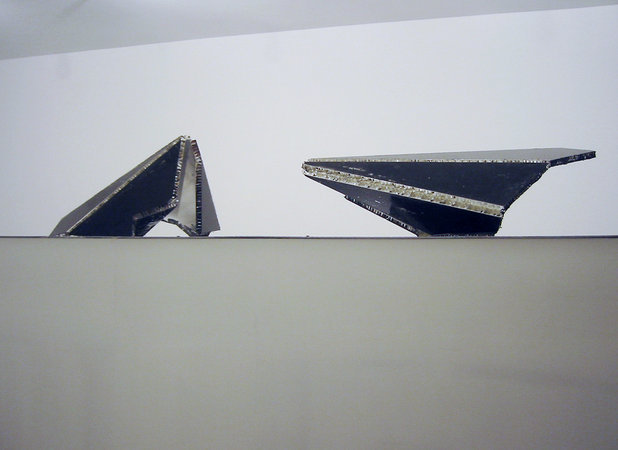 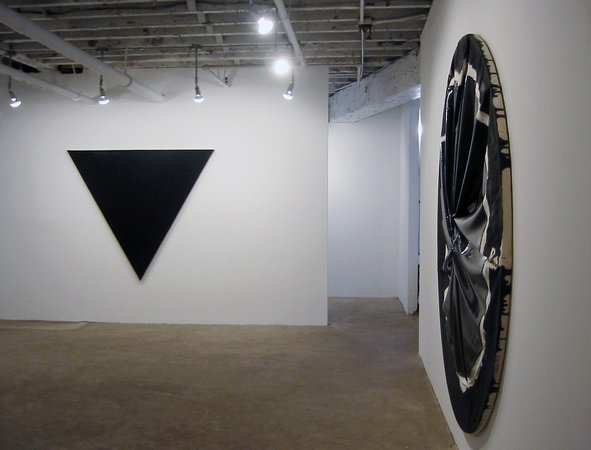 Team will present new work by Steven Parrino from the 7th of October through the 6th of November 2004. The gallery is located at 527 West 26th Street, between Tenth and Eleventh Avenues, on the ground floor.

The exhibition, entitled Plan 9, will be made up of sculptures and paintings in hybridized forms, a sixteen-millimeter film, and one framed drawing. Parrino’s practice, always in a fluctuating process of redefinition, constraint and decadence, has been limited to work in black for the past several years. The shaped canvases and sculptures on view form pyramids, inverted triangles and voided circles, adding to his non-palette to create a negating system of gesture, structure and advance — an environment in which chaos is represented as a site of creative possibility and elemental stability.

Part of a generation of artists whose work evolved in the East Village scene during the late 1970s and early 1980s, Parrino’s work has been positioned in a number of awkward niches, none of which has been sufficiently accommodating to his iconoclastic stance. Shown and read against artists as diverse as Jack Goldstein, Sherrie Levine, Cady Noland, Mike Kelly and Jeff Koons, Parrino’s work both traffics in and negates aspects of popular culture, minimalism, the American body politic, and arte povera. Lacking critical support in the US, Parrino’s oeuvre has been enthusiastically supported by the European museum and gallery system while remaining relatively unknown here. A critical reappraisal of the work is already underway, however, brought about by his growing sphere of influence, particularly on the work of a number of significant younger artists.

His work has been shown at museums and galleries in Paris, Milano, Amsterdam, Köln, Grenoble, Torino, Vienna, Dijon, Warsaw, Tokyo, Zurich, Stockholm, Berlin, Nice, London and Kassel. Among the many museums where his work has been shown are the Ludwig, the Museum Fridericianum, the Centraal Museum, the Altes Museum, and the Centre Georges Pompidou. Parrino was included in the 2003 Biennale de Lyon and a major survey show is currently being planned by Geneva’s Musée d’Art Moderne et Contemporain to open in 2006. That exhibition will travel.

This is Parrino’s fourth solo show at Team; his thirty-seventh one-person exhibition since 1984.