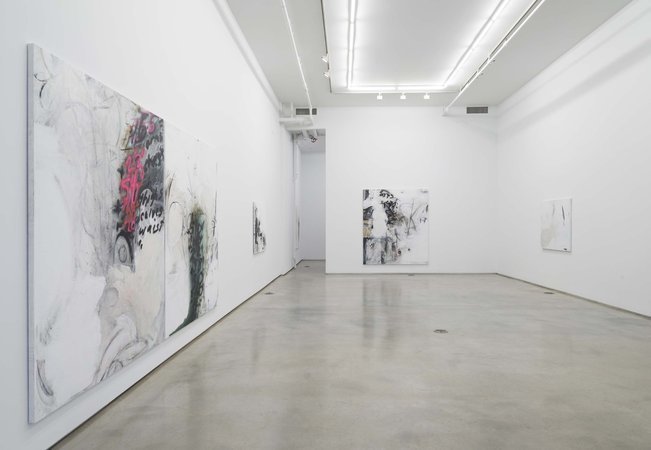 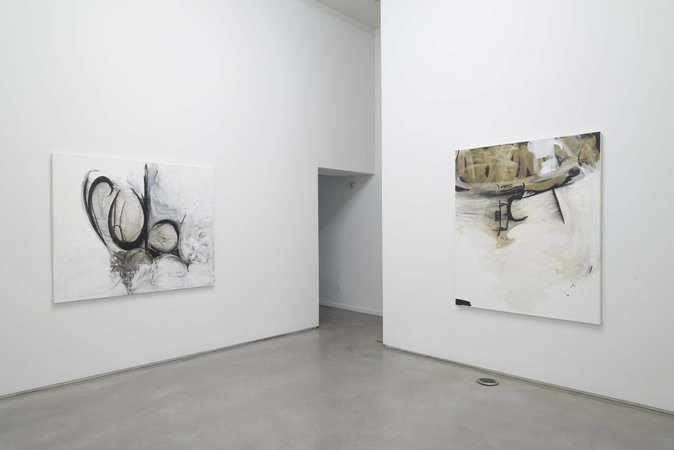 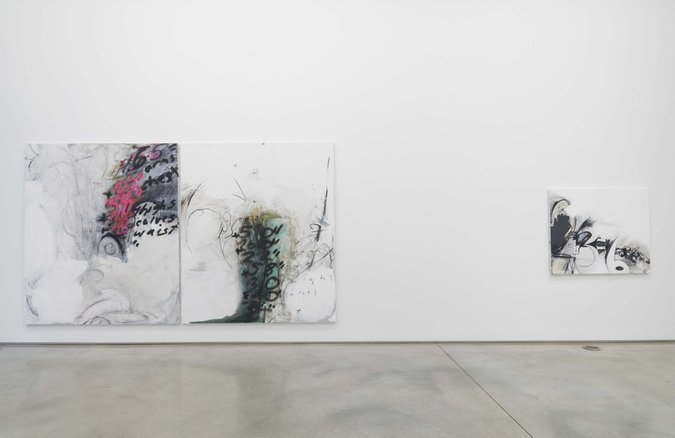 Team (gallery, inc.) is pleased to announce a solo show by the New York-based painter Suzanne McClelland. This marks her first appearance at Team. Entitled Every Inch of My Love, the exhibition will run from 10 October to 17 November 2013. Team (gallery, inc.) is located at 83 Grand Street, between Wooster and Greene, on the ground floor. Concurrently, our 47 Wooster Street space will house a one-person exhibition of new work by Marc Hundley.

McClelland’s pictures always find their genesis in textual elements -- words and numbers. The artist considers writing as a form of drawing, especially as handwriting falls increasingly out of use, almost entirely replaced by typing. She rejects the cold, bright advertisement styles of Jenny Holzer and Barbara Kruger, instead finding closer precedent in the likes of Cy Twombly, Joan Snyder and Louise Fishman. Her method of writing is far from automatic; her script is born of careful listening, tethering sounds to language. The paintings seek to fill the perceptional gap between what she hears and what she reads. The artworks are synesthetically representational -- portrayals of the mechanical and verbal languages that permeate her surroundings.

McClelland is extremely conscious of her painting’s two-dimensionality and the particular kind of reading it necessitates. Unlike sculptures, or the three-dimensional paintings of Robert Morris or Eva Hesse, which can be approached and understood from a variety of angles, viewers have a singular, common experience with the flat, painted plane. McClelland’s paintings showcase a keen but unorthodox sense of form: one which resists the lure of beauty, employing interruptions in formal fluidity to develop a particular breed of legibility. They find part of their appeal in this difficulty: the abruptness, the willingness to obscure a piece of text or a shape. The viewer’s eye slides and jumps across the canvas, simultaneously following forms and reading words, allowing the artist’s heard language to come to visual life.

One body of work on display is titled Internal Sensations. Each of these paintings is titled after a single word describing an intense feeling: brood, rub, yearn. DeKooning, in conceiving a painting, often began with a word. McClelland’s work nods towards him; she foregrounds and meditates upon this moment of his process, quite literally making the word the painting’s subject. The paintings reflect their driving words, full of dynamic tension, pairing muddy, gnarled, muddy patches of black paint with soft, lush elements. McClelland also tends to employ a variety of media as well as color palettes in a single painting, which furthers this effect. The words vary in legibility from painting to painting --“brood” can easily be read, jagged black letters in the center of the painting, while the letters spelling out “yearn” require intense focus to decipher.

McClelland has produced three Ideal Proportions paintings, each of which contains words as well as appropriated lists of numbers. McClelland is interested in the way numbers serve as a link between physicality and language, as textual representations of the concrete world. Here, she sets her focus on human physical appearance. The paintings take as their digit-source ideal male body proportions, as posited by two different famous body-builders. In representing their bodies with numbers, the men undergo acts of self-objectification, describing a physically extant person that is somehow separate from the self.

Another body of paintings employs numbers in a different capacity: McClelland’s Solutions for Polke take as their subject a painting by Sigmar Polke which presents a number of incorrect solutions to simple arithmetic equations, like 1+1=3 or 7+3=8. Polke’s painting incorporates consistent typeface and evenly distributed paint in order to appear printed or machine-made. McClelland uses some of Polke’s faulty math to create her own incorrect equations, however, in contrast to her predecessor, these pieces are radically painterly, full of jagged effort. We rely on numbers to provide us with a sense of order, to give shape and meaning to something otherwise impossible to comprehend. These pictures explore the ways in which numbers affect and relate to human lives, particularly in light of the collapse of the global economy in 2008, when mathematical projections failed so dramatically. The Solutions paintings reconsider the objectivity of numbers, revealing them to be as prone to shortcomings as anything else man-made.

McClelland’s current working method -- to paint simultaneously on different bodies of work, inspired by divergent criteria -- makes for an exhibition that hangs together tightly without the kind of all-encompassing closure that would stifle the feeling of freedom and joy that her pictures embrace.

Since the mid-1980s, Suzanne McClelland has shown her work extensively in the United States and abroad. Museum solos include The Whitney Museum of American Art in New York and the Orlando Museum of Art in Florida. Her work is included in many public collections, among them The Museum of Modern Art, The Metropolitan Museum of Art and The Brooklyn Museum in New York City; The Yale University Art Gallery, the Albertina in Vienna and the Walker Art Center. McClelland participated in the 1993 Whitney Biennial and was recently included in The New Museum’s NYC 1993: Experimental Jet Set, Trash and No Star.