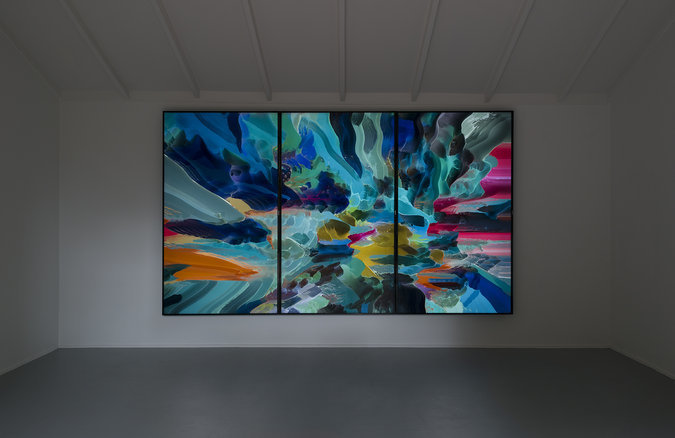 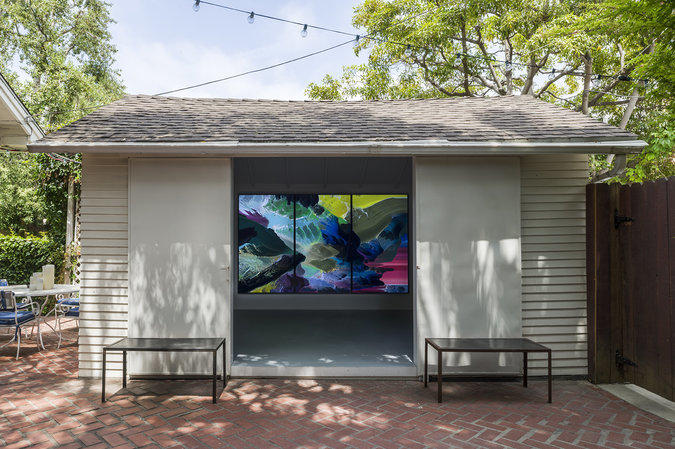 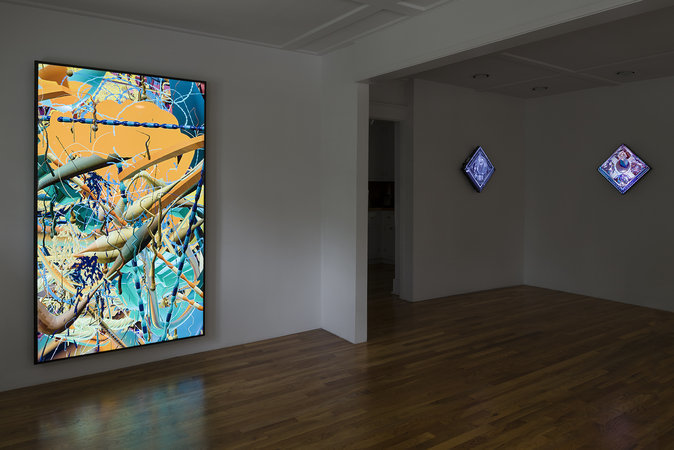 Team (bungalow) is pleased to present Sunflower Seed, an exhibition of new work by New York-based artist Tabor Robak. The show will run from 15 May to 31 July 2016. The gallery is located at 306 Windward Avenue in Venice, California. Concurrently, our New York gallery at 83 Grand Street will house a show by Gert & Uwe Tobias.

For this show, Tabor Robak will show four new digital artworks, each of which generates its imagery live via a dedicated custom-built PC. As a result, the works are durationally infinite, the likelihood of any moment repeating itself a statistical impossibility. This body of work represents a notable departure from past exhibitions, which primarily consisted of looped data. Additionally, whereas earlier pieces have always contained identifiable points of visual reference – appropriating imagery from both real-world and digital sources – the contents of Sunflower Seed are the product of the artist’s newfound interest in the seemingly oxymoronic possibility of programming abstraction.

The show’s title obliquely refers to a coding technique called the “random seed,” a numerical sequence used to trigger a number generator. Although true randomness is impossible to program, this method allows for the appearance thereof. In the case of these artworks, Robak has chosen the exact date and time, down to the millisecond, to act as seed digits, introducing a peculiar and invisible relationship to real-world temporality. The word “sunflower” evokes nature, and draws a parallel between organic growth and the artist’s coding, both of which operate according to differing kinds of parameters and algorithms.

These pieces recall certain aesthetic elements from the history of painting, but Robak’s intention is not to comment on that medium – instead, he attributes those similarities to comparable creative ambitions, resulting in shared compositional and coloristic choices. By rediscovering elements of the more traditional medium in this neoteric context, the artist explores the powerful potential of computers as not only tools, but active agents in art-making – in a sense, he is teaching machines to paint.

The temporally uninhibited access these works provide viewers to the “creative act” explicates the shortcomings of mechanically unassisted human production. The artist is not, however, unaware of the sacrifices his work makes to participate in the technological vanguard: Sunflower Seed carries a permeating sense of nostalgia, founded in the impermanence of the on-screen imagery, and, implicitly, the transience of all technological innovation.

The single-channel work Skypad is similarly abstract, but its slower pace and harsher, more multifarious forms and color palettes spawn an appearance of depth and texture. The image is constantly in the process of constructing itself, layering linear shapes of various widths and complexities: the result is an artwork that appears perpetually incomplete, forever moving towards an unattainable horizon.

The exhibition’s two most modestly-scaled works, entitled Junk Drawer (Platinum) and Junk Drawer (Crystal), display their imagery on square monitors turned on their corners. Each shows shapes dropping from the top of the screen into a pool of water contained by foregrounding walls running parallel to the bottom bezels, one in color and one in black and white. The austerely geometrical composition, visual density and exacting reptitiousness evince a sense of perverse industry. In combination with the screens’ atypical orientation, the composition proffers the distinct impression of three-dimensional depth. The introduction of tromp-l’œl perspective adds a new complicating element to Robak’s explorations of technological and artistic artifice. The works’ overall effect is at once sinister and oracular, impressing themselves on the viewer as ominously sacrosanct arcae.

This is 29-year-old Robak’s third solo show. Previous exhibitions have been rapturously received, including reviews in The New York Times, New York Magazine, The New Yorker, Art Observed, Modern Painters, Interview and Mousse. He was also the subject of a feature article in the November 2015 issue of Artforum. He has been featured extensively in group exhibitions at galleries and institutions both stateside and abroad, including the 12th Lyon Biennale; Palazzo delle Esponizioni, Rome; The Albright-Knox, Buffalo; MoMA: PS1, New York; Kunsthalle Düsseldorf; Migros Museum, Zürich.