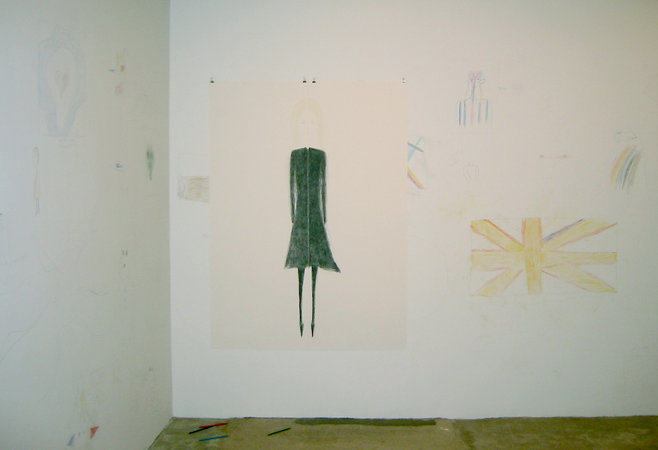 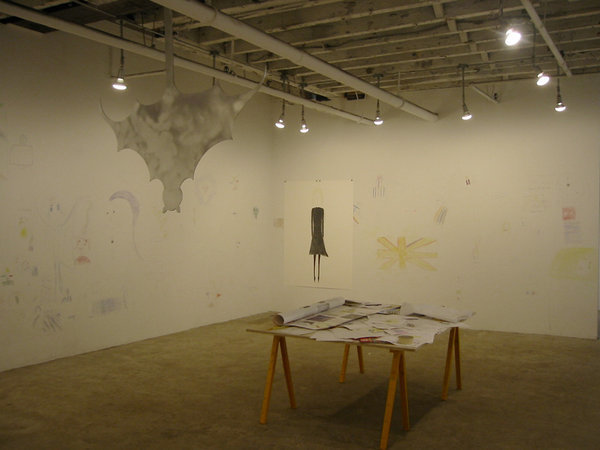 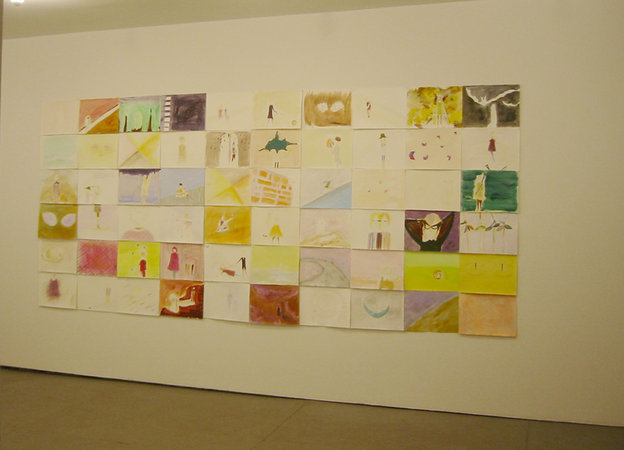 Team Gallery will present a solo show of new work by Tam Ochiai. Entitled tail (exercises in punctuation), the exhibition will run from the 28th of July through the 24th of September 2005. The gallery is located at 527 West 26th Street, between Tenth and Eleventh Avenues, on the ground floor.

This exhibition, Ochiai's fourth solo show at Team, is the result of a rather unique collaboration between the artist and 32 children, ages 2 to twelve. It also marks the culmination of a year spent concentrating almost solely on the act of drawing. Ochiai invited children from the Chelsea Recreation Center's summer camp program to collaborate on his installation. These neighborhood children, most of whom have never had any interaction with the network of galleries, were armed with colored pencils. In addition, Ochiai handed out catalogues of his art and a number of his own drawings and sketches. The 27 children in this first group were encouraged to "copy" Ochiai's works onto the walls of the gallery. Some succeeded at the "task" while others, insisting on their own originality, "failed."

After an hour, the kids grew tired and left. On the second day of the installation, a smaller group of children arrived for a more focused drawing session. The parents of these children responded to an email that had been sent out and to fliers that had been posted in the West Village. They were between the ages of 2 and 6 years old. Tam worked more closely with these children. The 5 and 6 year olds tried to make accurate copies of his drawings, while the two 2 year olds scribbled on the wall as they ran down the ramp.

This base layer, which reads both as genuine children's drawings and as a conscious re-creation of that "genre," was then used by Ochiai to ground a number of his own works. Teasing out a number of oppositions, such as the juxtaposition of a childlike innocence with a structuralist's rigor, Ochiai's project foregrounds the issues of authenticity and labor and their status as criteria for the critical evaluation of artworks. Both naive and sophisticated, clumsy and elegant, Ochiai's works defend a notion of sincerity and trigger arguments about affect and pretension. Ochiai insists that all this effortlessness is very hard work indeed.

Ochiai was born in Yokohama and, although he is largely nomadic, spends a great deal of his time in New York. He has had numerous one-person exhibitions with Tomio Koyama in Tokyo, Francesca Kaufmann in Milan, Arndt & Partner in Berlin and with Lisa Ruyter in Vienna. He has also participated in both gallery and museum shows in London, Basel, Salzburg, Amsterdam, Mexico City, Copenhagen, Osaka, Dijon and Brussels. Ochiai is currently included in 25 Years of the Deutsche Bank Collection at the Deutsche Guggenheim.