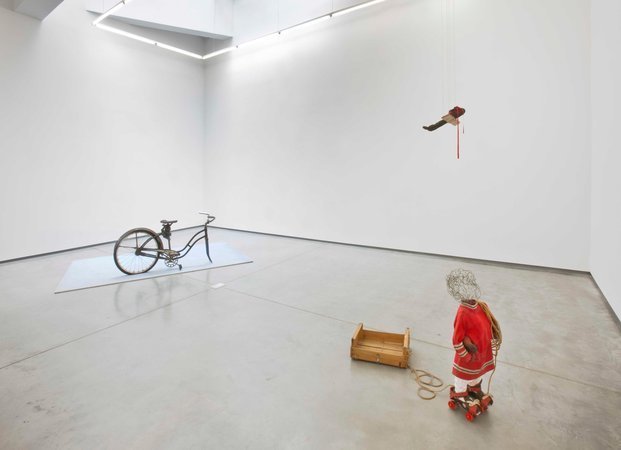 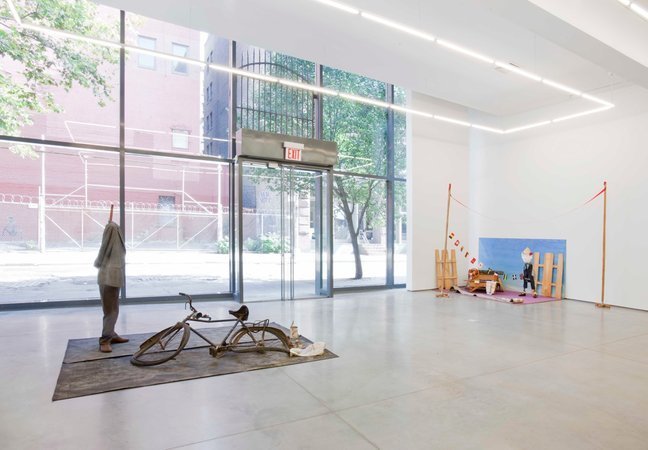 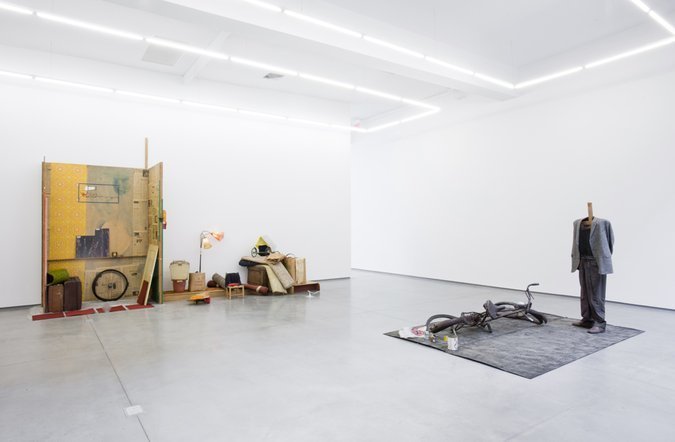 From the 1950s through ’70s, Greek proto-Arte Povera artist Vlassis Caniaris introduced specific sites of political and personal histories into gallery and museum settings with tableau arrangements created from everyday working class objects. Material, form, texture and display comprise a sophisticated vocabulary of presentation organized to draw attention to immigrant plight and the social conditions of displacement, as well as to distinct modes of viewing and viewer-object seperation as determined by exhibition environments.

For Caniaris’ second solo exhibition in the U.S. (his first was at New York’s Foundation for Hellenic Culture in 2003), the gallery will present six sculptures made between 1973 and 1974. Caniaris’ primary materials are wire, plaster, clothing, suitcases, trunks, and wooden crates. Caniaris fled dictator-led Greece in 1956 to settle in Rome, Paris, and Berlin, in succession, before permanently returning to Athens in 1976, where he lived until his death earlier this year. The transitory objects of migrant workers are mainstays of Caniaris’ environmental installations, pointing to cultural, societal, and political non-sites which are degraded, anonymous, and abandoned.

In the large-scale assemblage Interior, Caniaris does not replicate the interior of a room; rather, he erects a compositon with three flimsy and exposed plywood walls in order to both separate and equate the provisional and impoverished nature of interior and exterior. Functional objects are rendered unproductive by their positioning, including a single leaning bicycle tire, rolled carpets, and an object-covered chair. A simple drawing of a boat is perhaps Caniaris’ mere offer of relief, a child’s thin outline of transport preserved in a metal frame, secured to the structure, and hung at a level where it can be viewed without obstruction. Among the limited objects with which a person exists, only this rudimentary artwork offers respite with a simplistic vision of mobility and escape. This poetic trope is oftentimes found in Caniaris’ installations from this period.

Caniaris considers human figures and gestures in his elemental configurations. Built to human scale, Tourist and Aufenthalt/Stop both present clothed scarecrow-like bodies made from chicken wire and plaster. The plaster figures often have parts that are missing or unfinished, or, as in the case of Tourist, elephantine (the Tourist’s head and feet are swollen beyond realistic proportion). The relationship of the figure to the object composition is meant to establish a direct and parallel connection to the viewer relation to the artist’s particular treatment of space.

Caniaris also frames human figures in relationship to movement, placing his subjects in between stillness and mobility. In Without Words, an unfinished plaster figure of a child wears roller-skates while tethered to an empty wooden storage crate, complicating any possibility for skating. While the wooden swing of Small Cradle does provide the potential for airy, elementary motion, the missing tire of Bicycle denies easy transit.

Vlassis Caniaris’ first solo exhibition was held in Athens in 1958. Since then he has had numerous exhibitions at galleries and museums including ARC, Paris; Moderna Museet, Stockholm; ICA London; Hannover Kunstverein, Hannover; Benaki Museum, Athens; the 1964 Venice Biennale; the 1988 Venice Biennale; Documenta 6, Kassel in 1977; and a retrospective at the National Gallery, Athens in 1999. His work is included in many public collections including Tate Modern, London; SMAK Stedelijk Museum voor Actuele Kunst, Ghent; Fonds National d’Art Contemporain, Paris; and National Art Gallery, Athens.