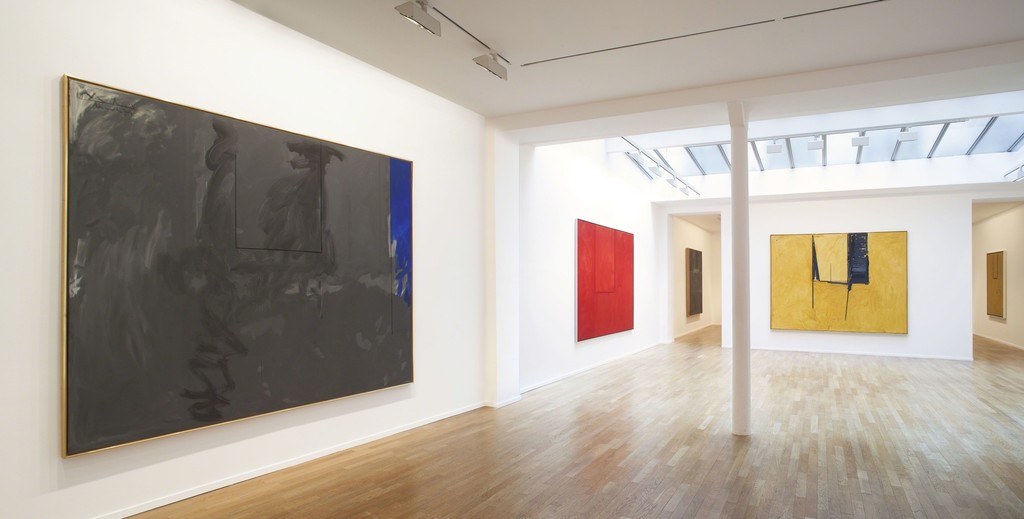 In 1967, under the title Open, Robert Motherwell created a new series of work focusing on the theme of the window, previously explored by many artists, including Matisse, as a metaphor for the relationship between the inner world of emotions and outer world of the senses.

Intimate and meditative, the Open works are made up of simple planes of colour broken up by three lines rendered in charcoal and forming loosely rectangular shapes. Fragments drawn on blocks of colours conjure up Motherwell’s ties to minimalism as well as, especially, the artist’s conceptual and philosophical standpoint, expressed in his exploration of the dualities between content and absence, space and surface.

Motherwell’s interest in the ‘stark beauty of dividing a flat, solid plane’ raises the question of the way in which nature has been altered by humans along with strictly artistic issues, such as the ‘viscosity of paint, of color fields, of the skin of the world’.

Robert Motherwell worked on the Open Series for almost two decades, until the early 1980s. As the series progressed, the works become increasingly complex as the artist worked through all possible permutations of these very limited means.

Robert Motherwell was born in 1915 in the USA and died in 1991. A leading figure in abstract expressionism, he was a painter, printmaker, editor and art critic. Thanks to his interest in philosophy, literature and poetry, he forged ties with the surrealist artists he met on his travels in Europe in 1935 and 1939. His early works were influenced by the simple forms and blocks of colour that inhabited Matisse and Mondrian’s art.

A theorist and spokesman for the post-war New York School, his work bridged the European and American continents, incorporating the concept of automatism and psychoanalysis into American abstract art which he then promoted as the spearhead of a new international avant-garde.

Robert Motherwell taught throughout his life. His work has been extensively exhibited by the world’s top museums: in 1965, MoMA (New York) presented a major retrospective of his work which travelled to the Stedelijk Museum (Amsterdam), Whitechapel Gallery (London), Palais des Beaux-Arts (Brussels) and Museum Folkwang (Essen). Other retrospectives have been held in Düsseldorf (Städtische Kunsthalle, 1976), Paris (Musée d’Art moderne de la Ville de Paris, 1977) and London (Royal Academy, 1978). A major exhibition at the Albright-Knox Art Gallery (Buffalo, NY) in 1983 went on to travel to the Los Angeles County Museum of Art, San Francisco Museum of Modern Art, Seattle Art Museum, Corcoran Gallery of Art (Washington) and the Guggenheim Museum in New York. The artist’s work has not been shown in Paris for over ten years.