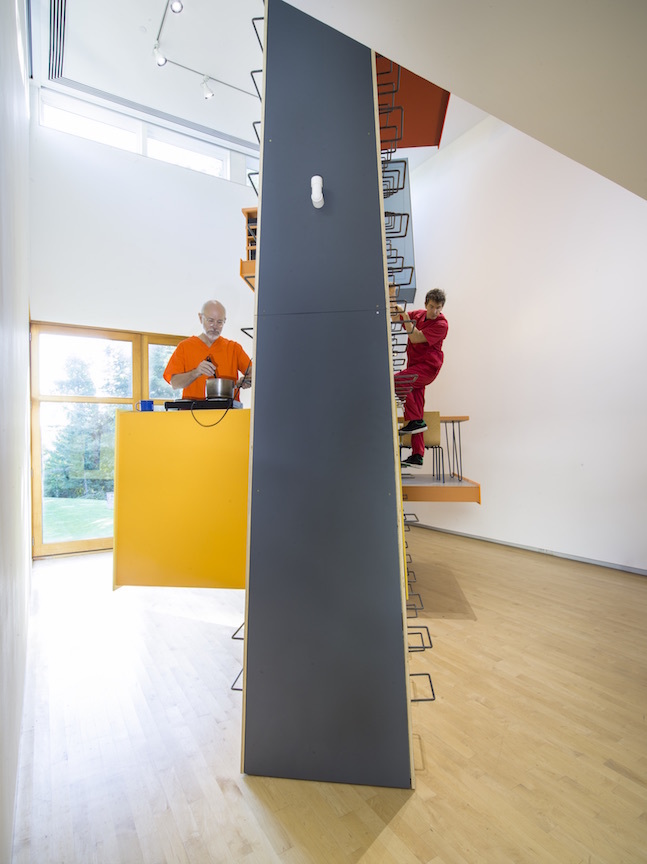 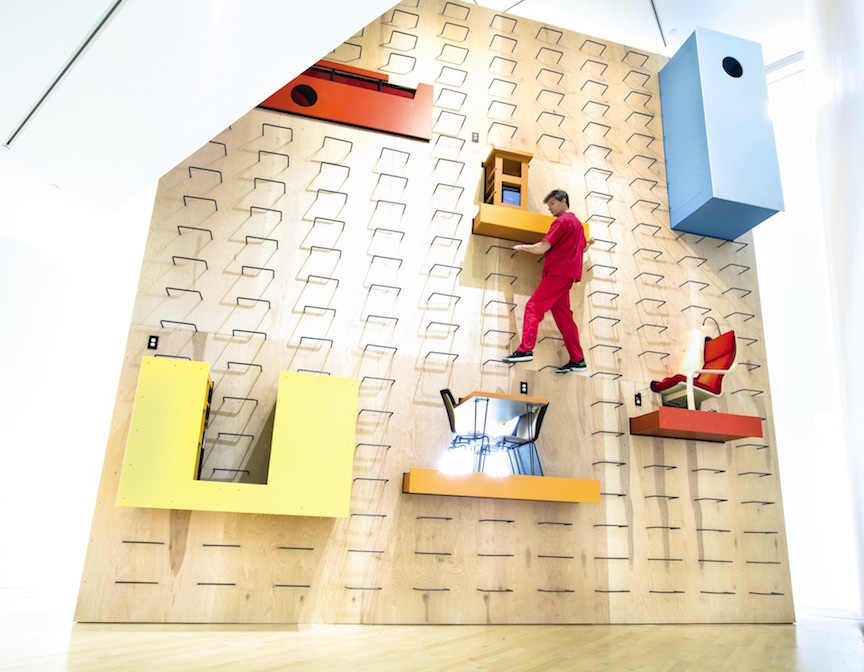 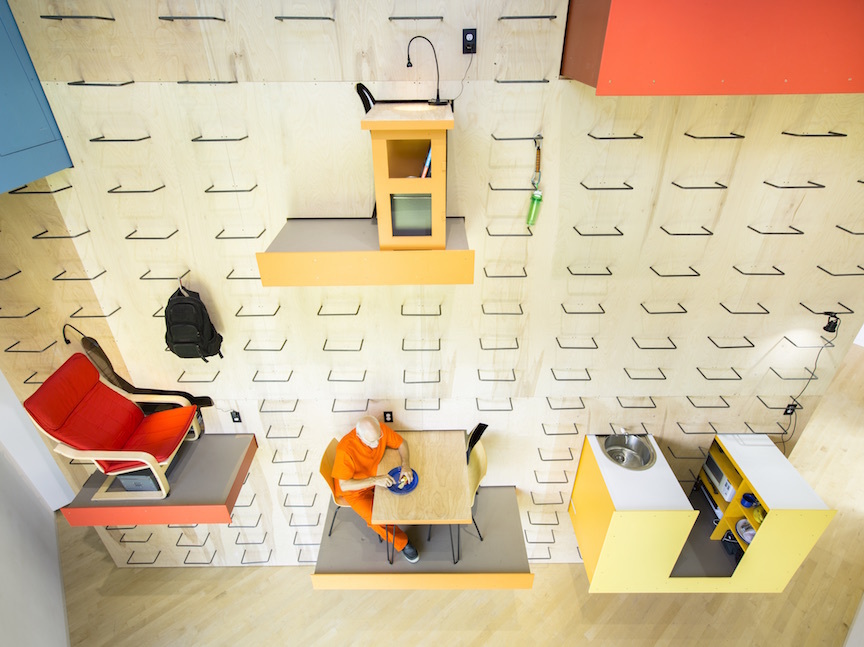 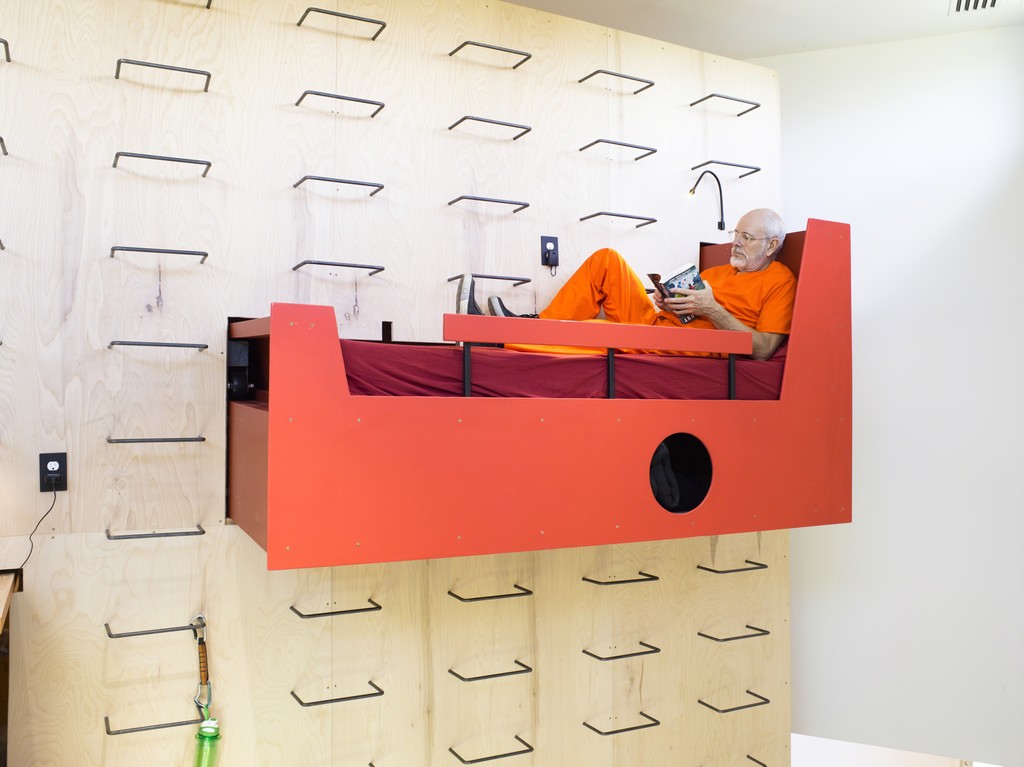 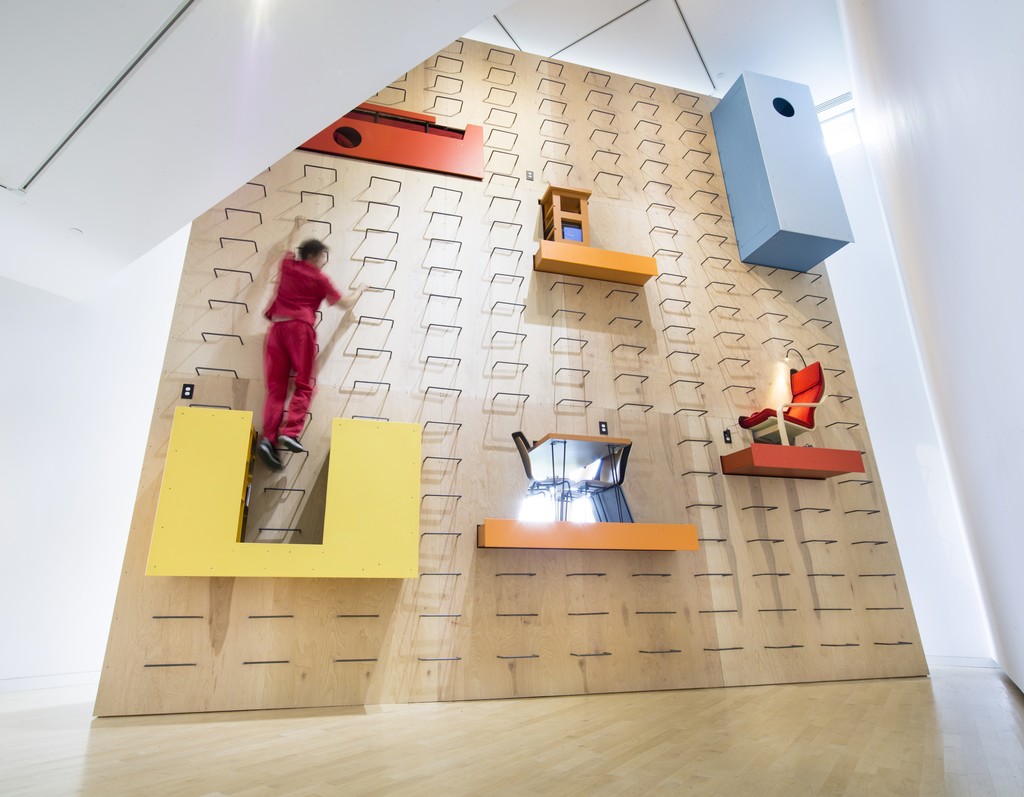 The Aldrich Contemporary Art Museum is pleased to present Alex Schweder and Ward Shelley: Your Turn, an architectural environment for two that shapes the occupants’ behavior. In a series of performances Schweder and Shelley will physically occupy the structure for extended periods during which they will negotiate the sharing of nine basic amenities while engaging the public with their daily routines and conversations. Schweder and Shelley’s collaboration is primarily based on balance: not only the balance needed to successfully work in a partnership, but also the social balance needed to share resources limited by the confines of their construction. Their practice conflates architectural form and function with performance art, coaxing meaning out of both the practical and the absurd. The exhibition will be on view October 1, 2017 to April 22, 2018.

Schweder and Shelley’s unique collaboration of over a decade has coalesced into what they call “performance architecture,” a new genre in which the two artists design, construct, and then physically occupy structures, blurring the boundaries between architecture, sculpture, design, and performance, exploring both the nature of social space and the way architecture influences human behavior. For their exhibition at The Aldrich, they will construct a twenty-four-foot-high living environment, which they will inhabit as both the authors and living subjects of the work. An adjacent gallery will present the first survey of their reverse paintings on Mylar, which not only act as preliminary renderings for their projects, but also as autonomous works that reinforce the formal aspects of their practice.

The artists will occupy opposing sides of the monolith with nine amenities (including a bed, a desk, an easy chair, a kitchen, a sink, and an enclosed composting toilet), each of which will slide on steel tracks from one side of the structure to the other. So, when Shelley is sleeping in the bed, Schweder cannot sleep; when Schweder is writing at the desk, Shelley cannot use it. The sharing of the amenities is based on both a pre-planned schedule and spontaneous negotiation. For the performance periods the artists will wear identical jumpsuits, bring all necessary supplies with them, and occupy the structure twenty-four hours a day. The artists’ lives, while within the structure, will be on public view when the Museum is open, and visitors are free—in fact, are encouraged by the artists—to engage them in conversation. When awake, Schweder and Shelley will each read, work, prepare meals, and complete acts of simple daily hygiene.

Ward Shelley received a BFA from Eckard College and an MA from New York University. Solo exhibitions of his work include Pierogi Gallery, NY; Massimo Carasi Gallery, Milan; Center for Contemporary Art and Launch Projects, Santa Fe; and Socrates Sculpture Park, NY. He has received a Pollock-Krasner Foundation Grant, an award from the Joan Mitchell Foundation, two fellowships from the New York Foundation for the Arts, and a fellowship from The American Academy in Rome.

A full-color, soft-cover scholarly publication will be available during the exhibition.

Alex Schweder and Ward Shelley: Your Turn is generously supported by Crozier. The official media partner for this exhibition is Connecticut Cottages & Gardens (CTC&G).