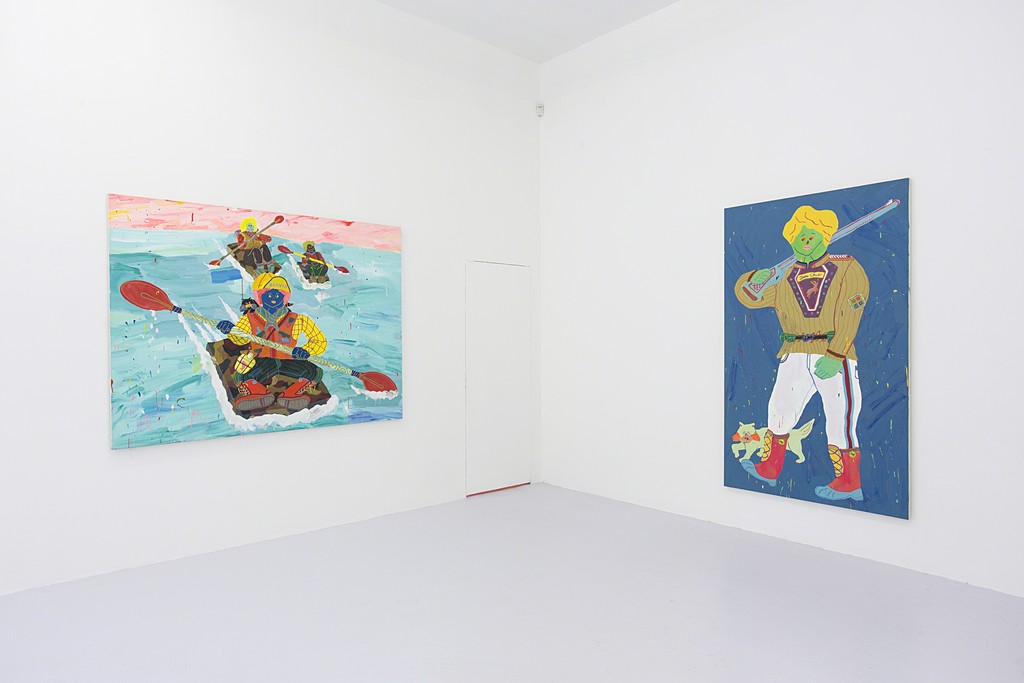 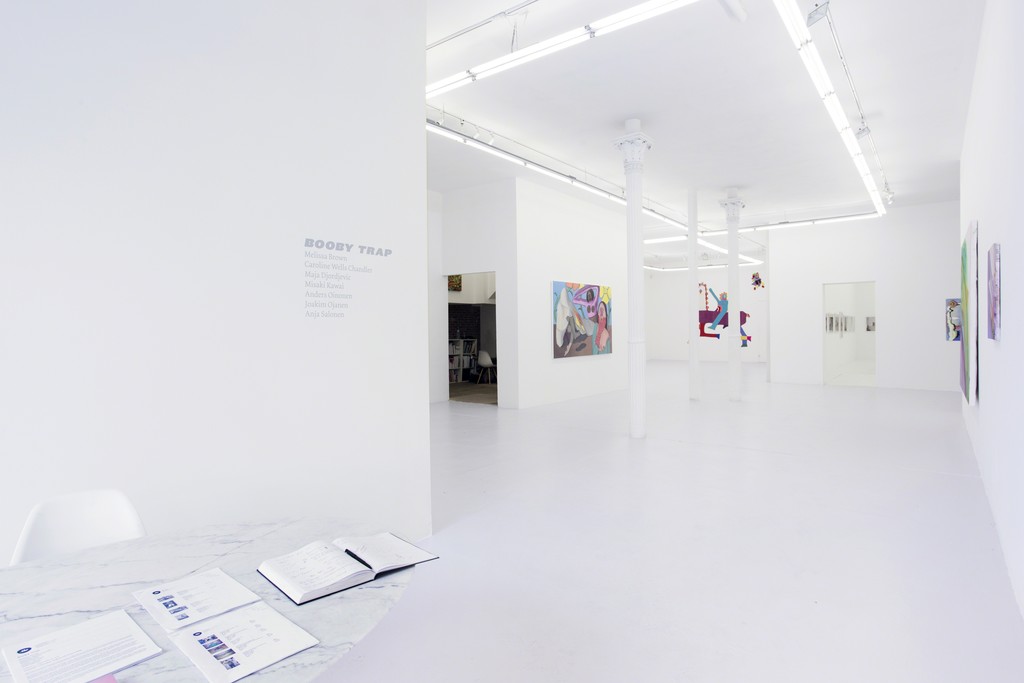 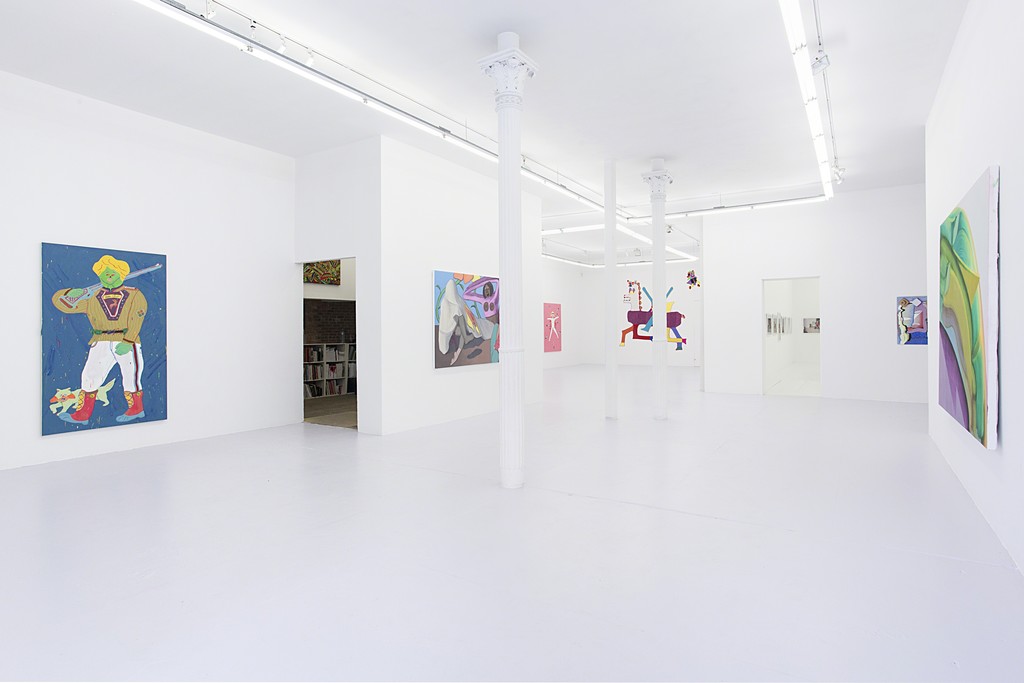 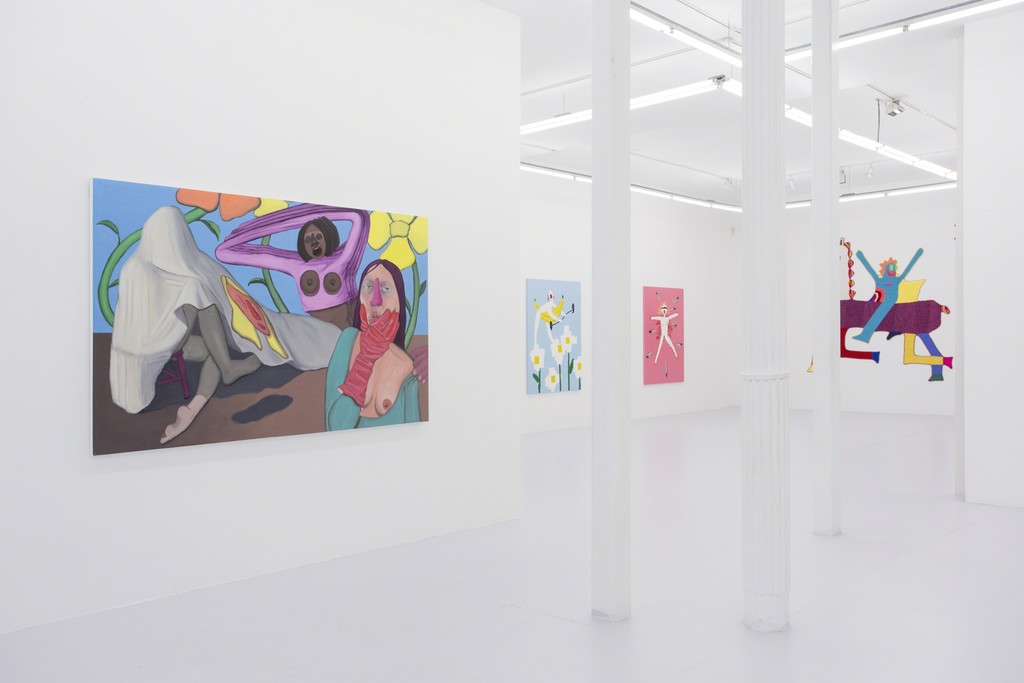 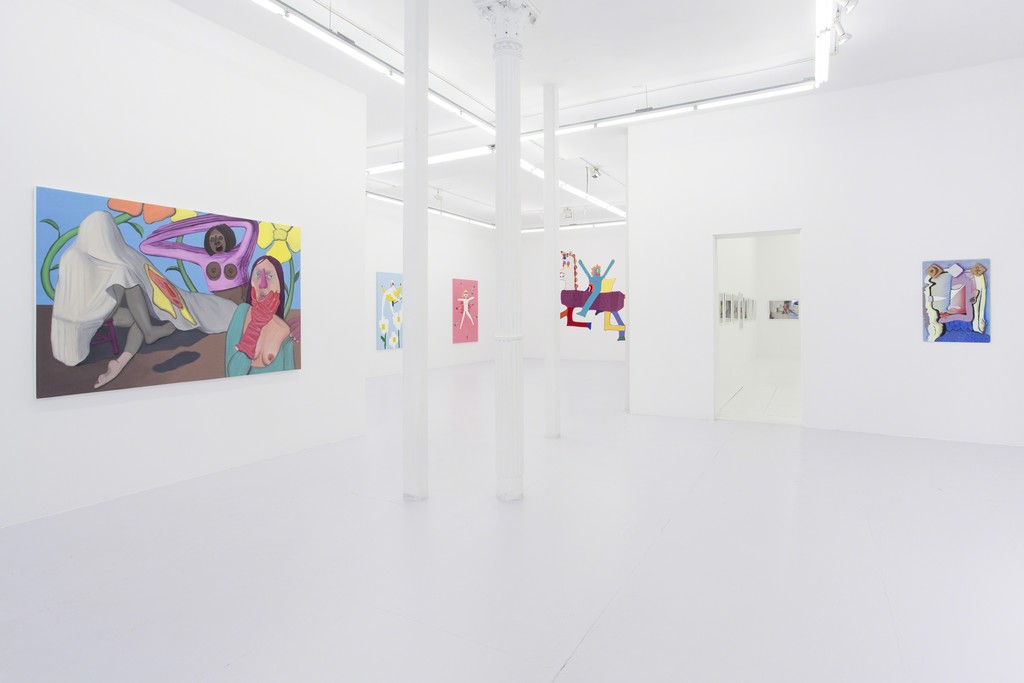 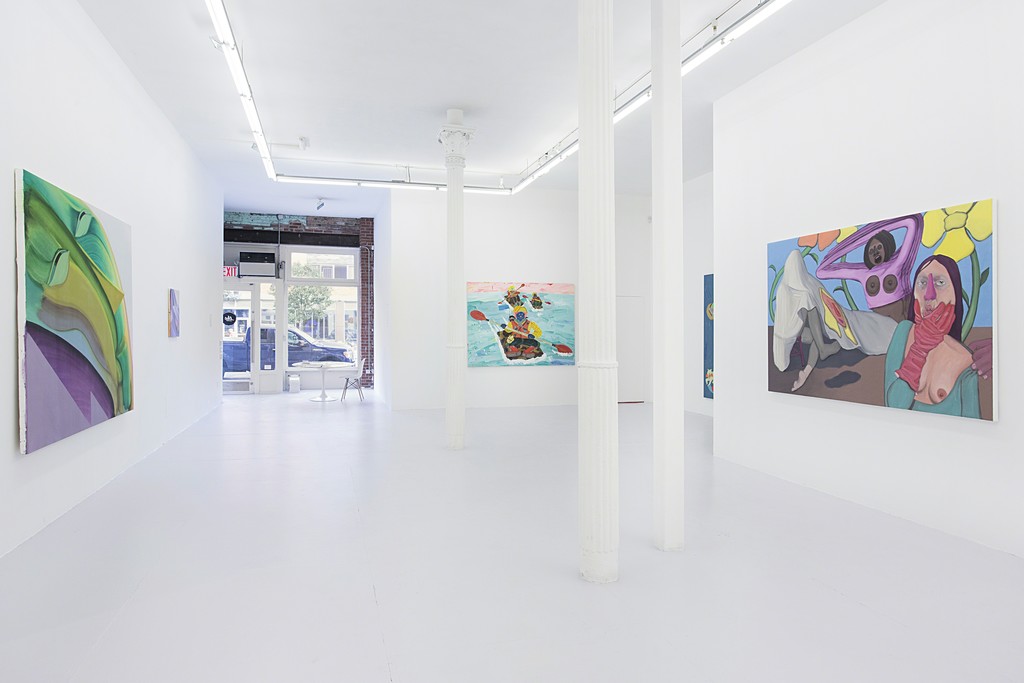 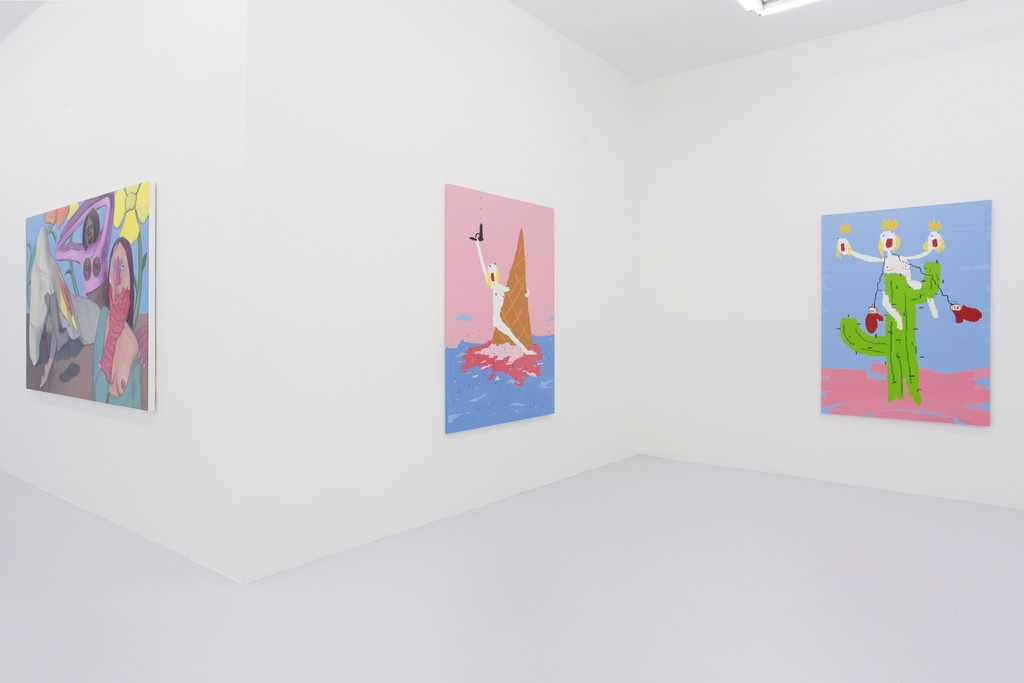 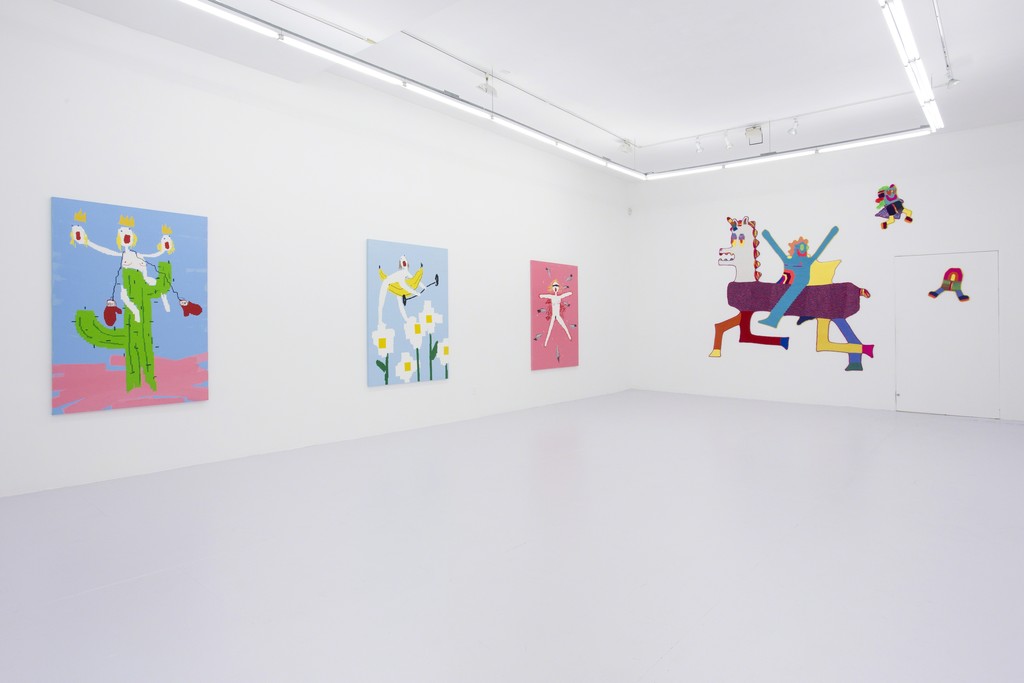 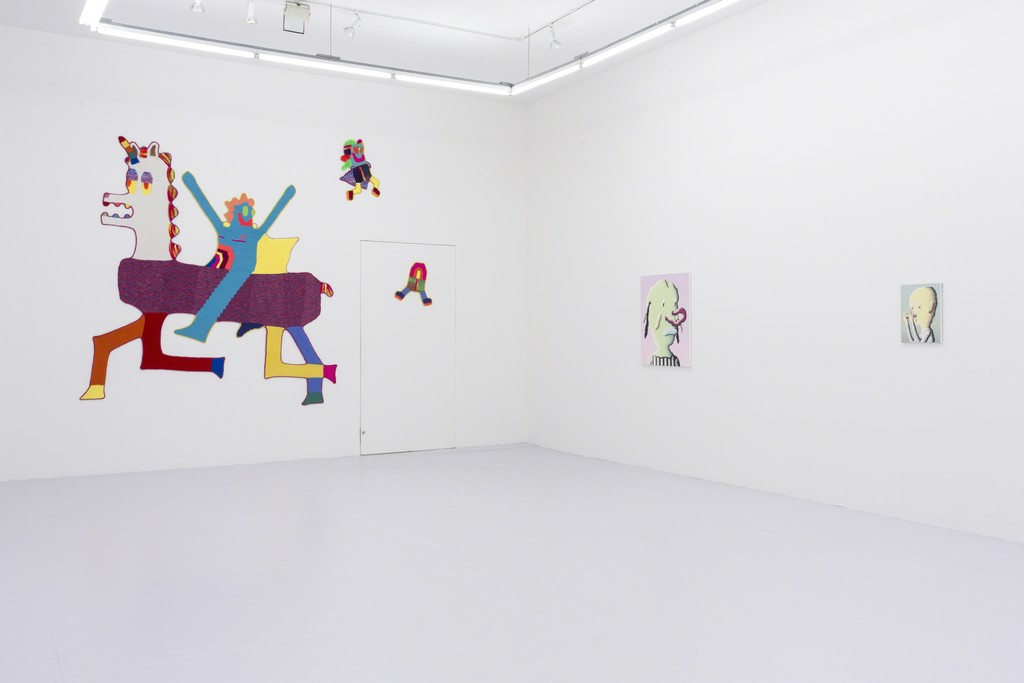 The Hole is proud to announce a group show of figurative artworks from artists both very familiar to us here at the Hole and some new names, to keep you guys (and ourselves) entertained this long, hot August with some amazing painting.

As in the painting pictured above, it is hot and wearing clothes is a bother. Our brains rebel against academic study--there will be enough of that come September--and under the heat dome our sensibilities start to cook, our ice cream melts as our tempers boil. That is to say, the artworks in this show are hot and bothered and a litlte bugged out. And so are we; we got to use the word "booby" in an exhibition title.

Works in this show take a flat approach to figuration (though we couldn't call the show "Flatlands" because the Whitney show just did) and this abuttment of areas of color to produce the figure here is both rudimentary and nuanced. Maja Djordjevic (b. 1990 Serbia) paints large oil paintings that look like quick MS Paint sketch ups. The women have blue squares for eyes, a scribble of yellow for hair and a big jaggedy red mouth, always yelling. Though abject as anything I've ever seen, the paintings inexplicably have positive titles, as in the above, "Be Happy -- I Love You".

Similar in jagged effect are Caroline Wells Chandler (b.Virginia Beach) crocheted textile works, evocatively titled "Cornholio Victory", "Eggbert", and "Lil Kathy G" (which I really hope is me.) Hot-lined and neon spiced, your eye might be equally drawn to nipples and crotches. A pun perhaps? Crafty pixelation sounds like an oxymoron but these figures' kicked up heels and triumphant arms convey a catchy exuberance that blankets any viewer perplexity with psyched.

Misaki Kawai (b. 1978 Japan) gives us a hunting scene and a white water rafting scene, plus animals. These paintings come from a series of works that use matte medium to paste in areas of painted paper and fabric to make figures of creative skin tone and upended palette. From abstract brushy backgrounds down to meticulous detailed accoutrements, her summer campers are outfitted for some bizarro recreation.

Similar in Jim Nutt-iness is Melissa Brown (b. 1974 New Jersey) whose ladies look a bit slicker with flashe and oil on aluminum but also get bedazzled a bit with scratch-offs, silkscreen and gradients. She exhibits five females; busts, let's say, and lets also say "enigmatic". We think that is the sphinx-like intent, with titles like "Matriarch" and "Mixed Messages".

Joakim Ojanen (b. 1985 Sweden) exhibits two little creatures, from a cartooning realm but fussily shadowed and lit with little squiggly black or white paint lines. Tubular, lumpy, and duck-lipped the little guy "Looking / Hiding" would happily exist well as either a painting or a puppet. The artist is known for beautiful glazed clay sculptures and the paintings look like they were composed in the same manner, à la Mr. Potato Head, a clay shape with protuberances added on to customize.

Anders Oinonen (b. 1977 Ontario) flattens his light-filled faces until they are pretty much landscapes. By slightly shifting the hue of his paint or putting a soft "frosting" wash over it to make it more opaque, Oinonen carefully pulls out of the hills and rivers an eye and a mouth and sometimes more. The areas of color are what do it but mostly the varying opacity and brilliance of the tightly controlled oil paints makes the works sing.

Lastly, Anja Salonen (b. 1994 LA) literalizes the push between figuration and flatness by including both in her expansive painting. Three fleshed-out figures of blended oil paint sit in a flat landscape with a canvas draped over one of them, on which a flat colored face is painted. Perhaps the most psychological work in the show--tho it has some competition in the "disturbed" department--the puzzlement on the foreground figure's face just about covers it for me.

These flattened figures may not be flesh, hairy and sweaty but they do all carry some kind of intensity, some anxiety, exuberance. As sorta symbols of a human rather than a traditional figure painting, these bodies represent more than a fully-rendered human might. Djordjevic's paintings for example only barely look like a person, you wouldn't see yourself in their skin, you wouldn't think they had a name, they are interchangably undifferentiated. But their lack of personalized feelings make them more effective conduits for communicating feeling somehow; the inchoate screams and gunshots reverberate with me, convey more poignantly a world that is out of control, howling and deranged. "Fried." Maybe that would have been a good summer group show title....