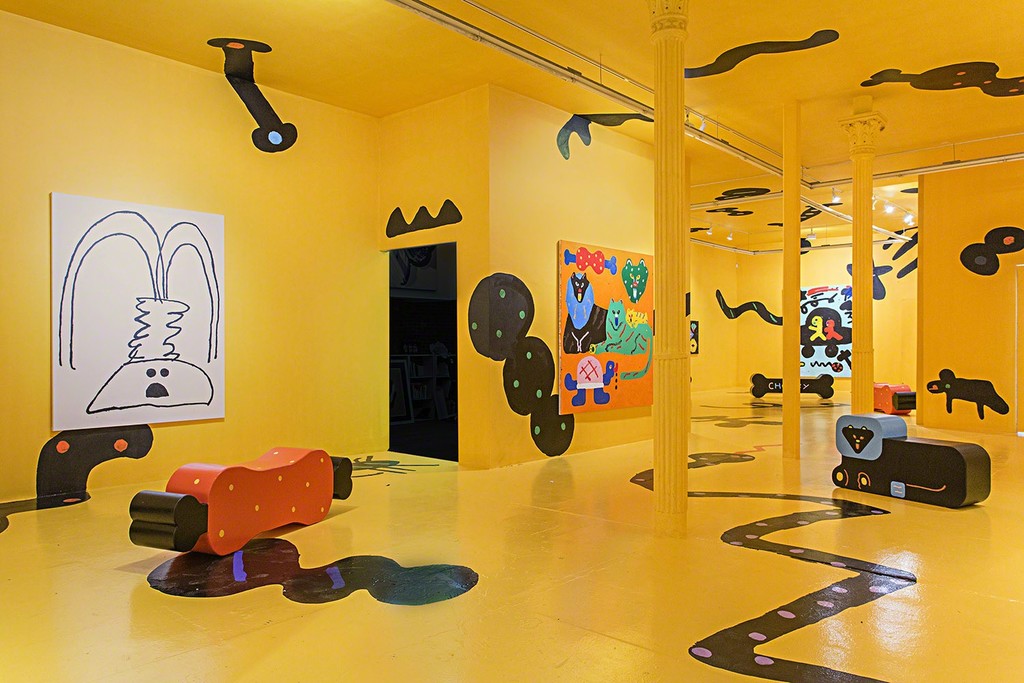 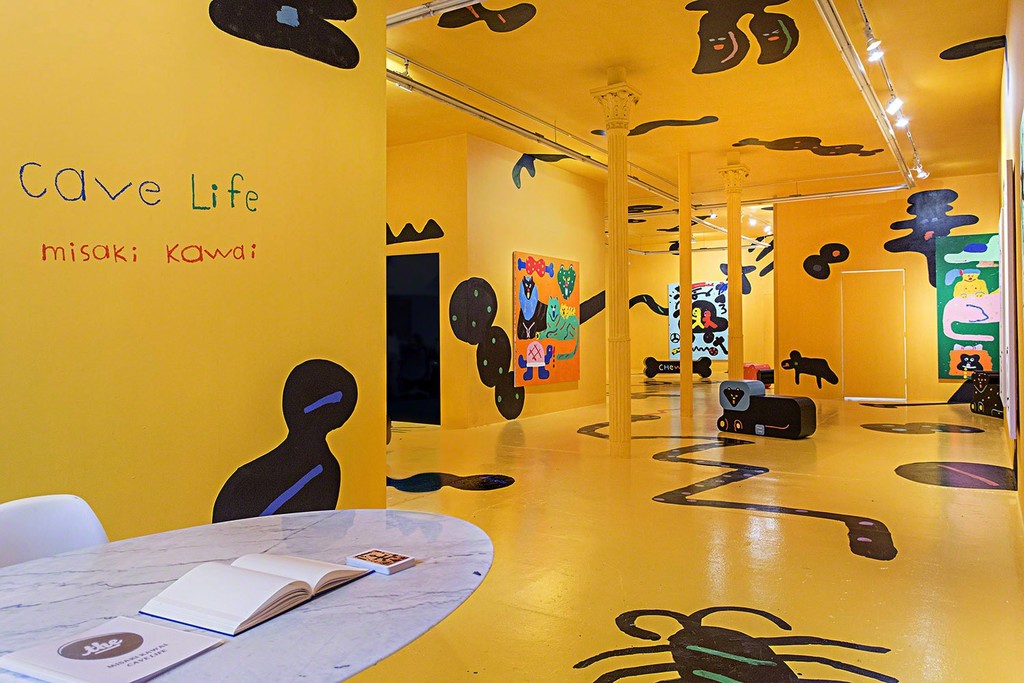 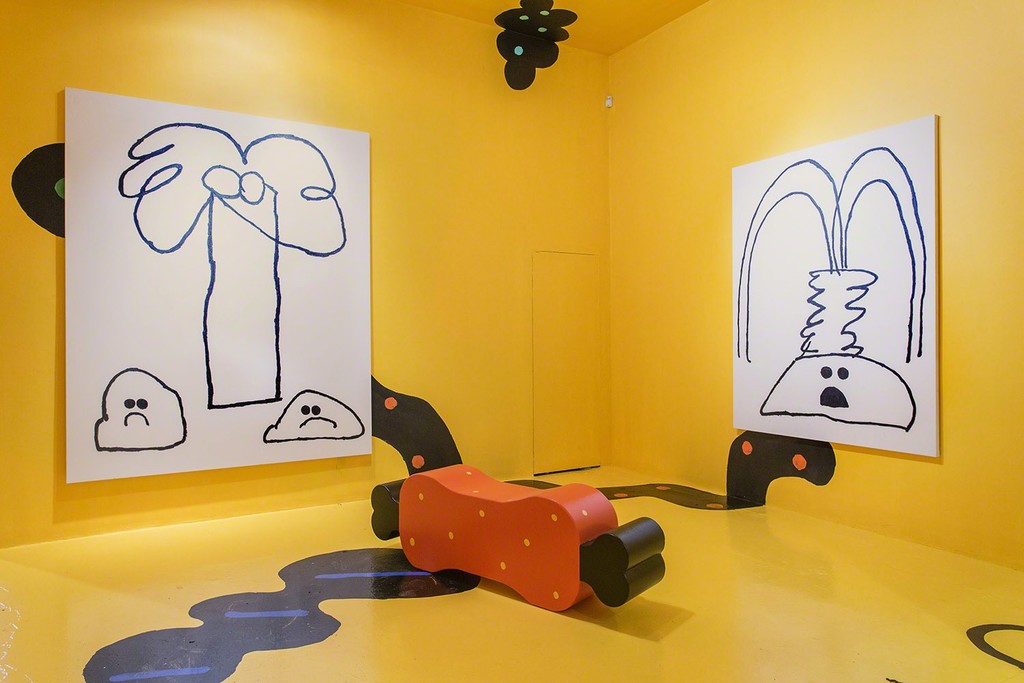 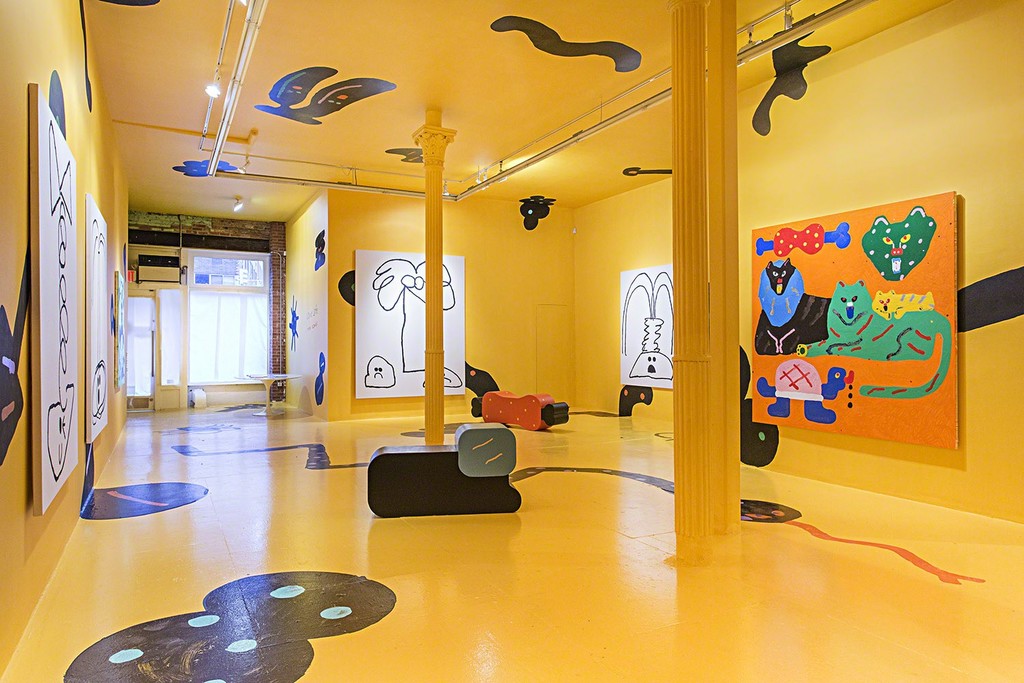 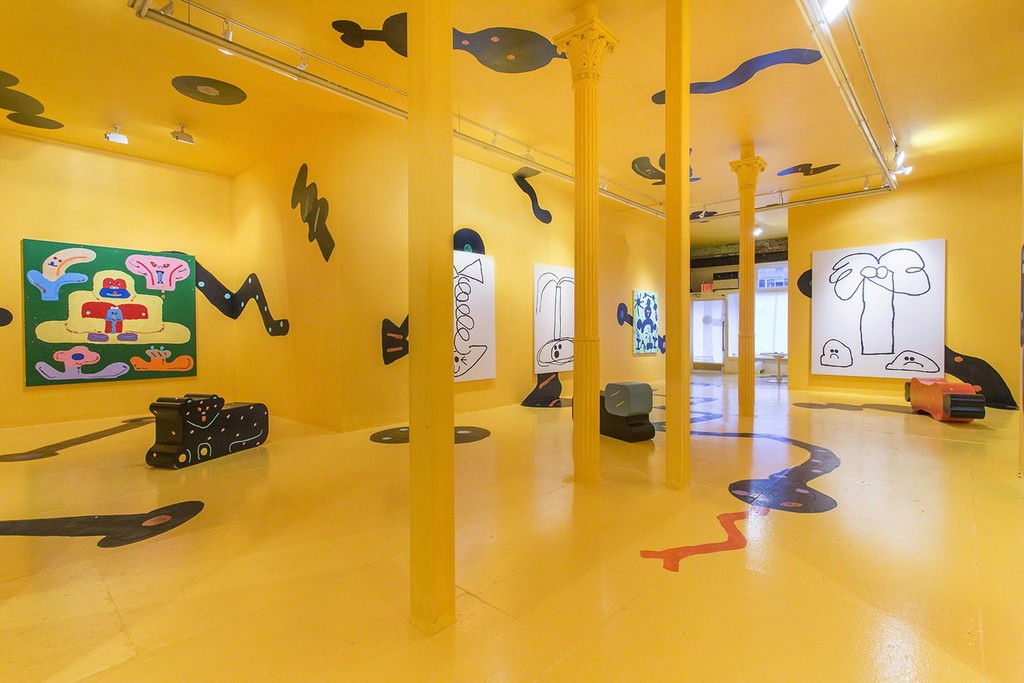 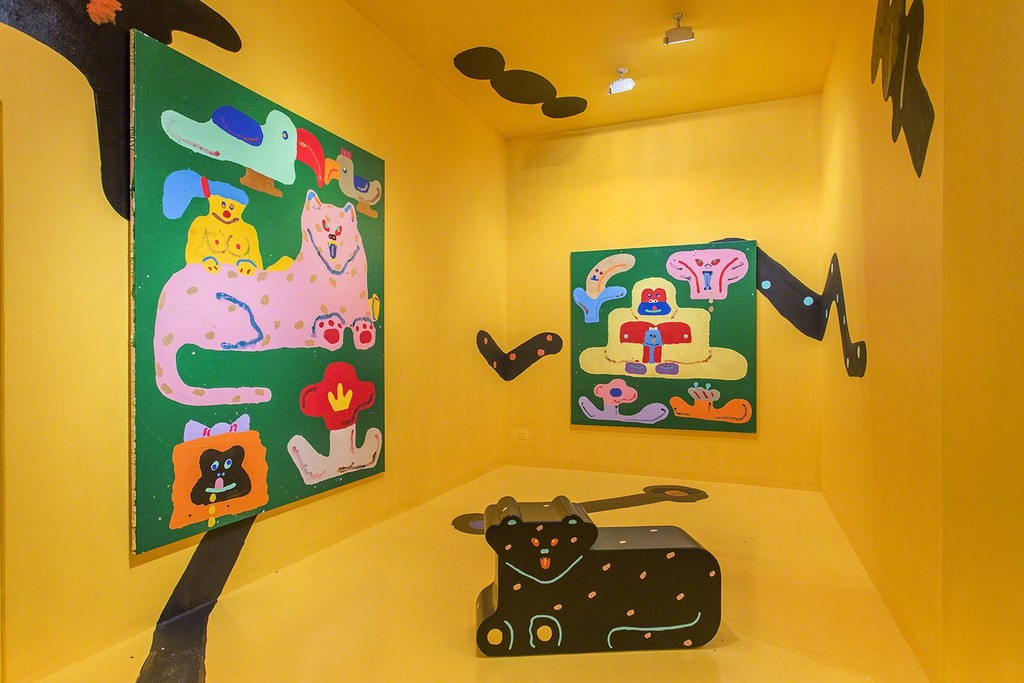 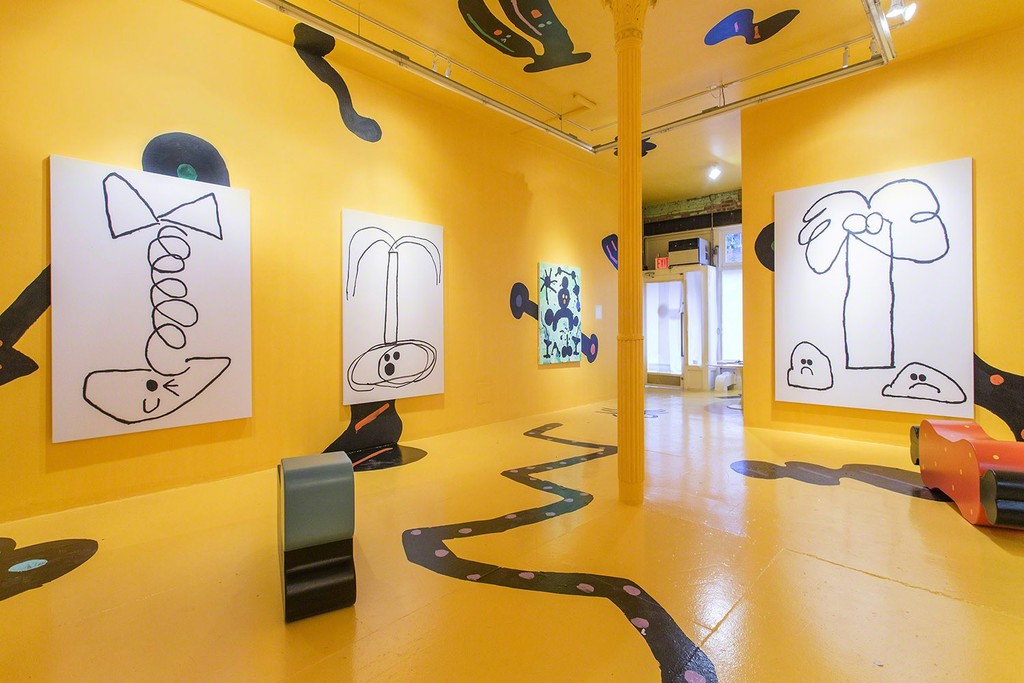 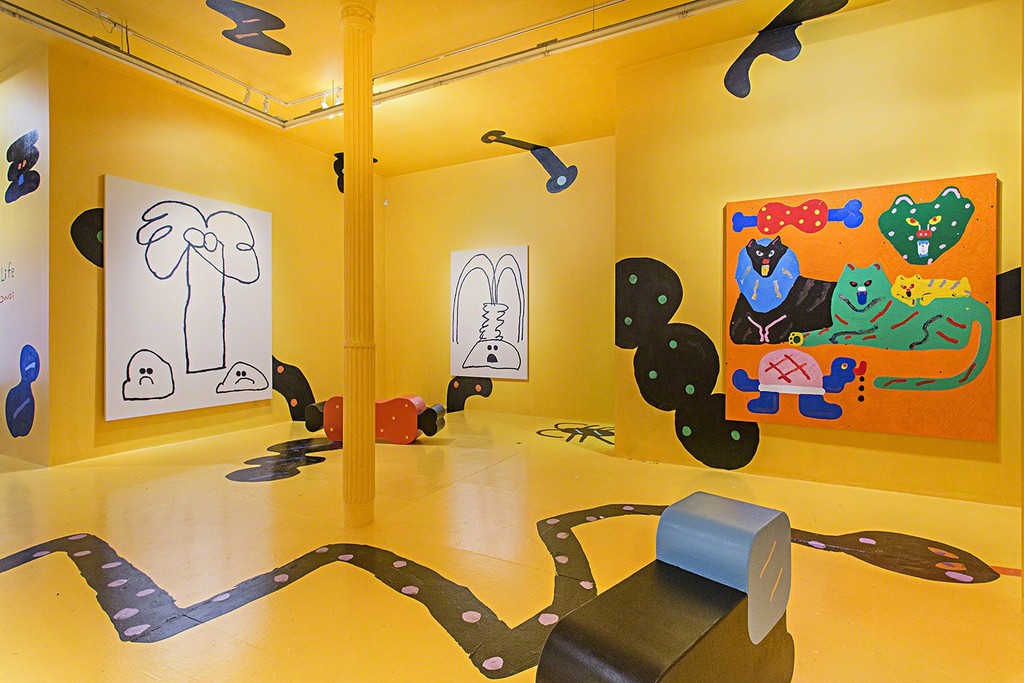 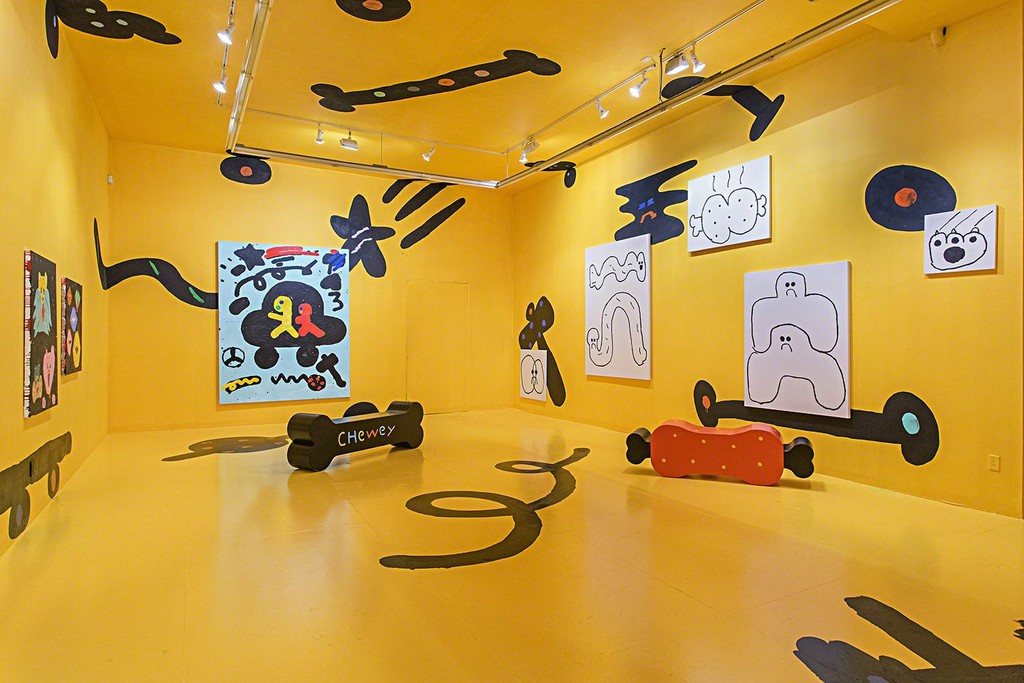 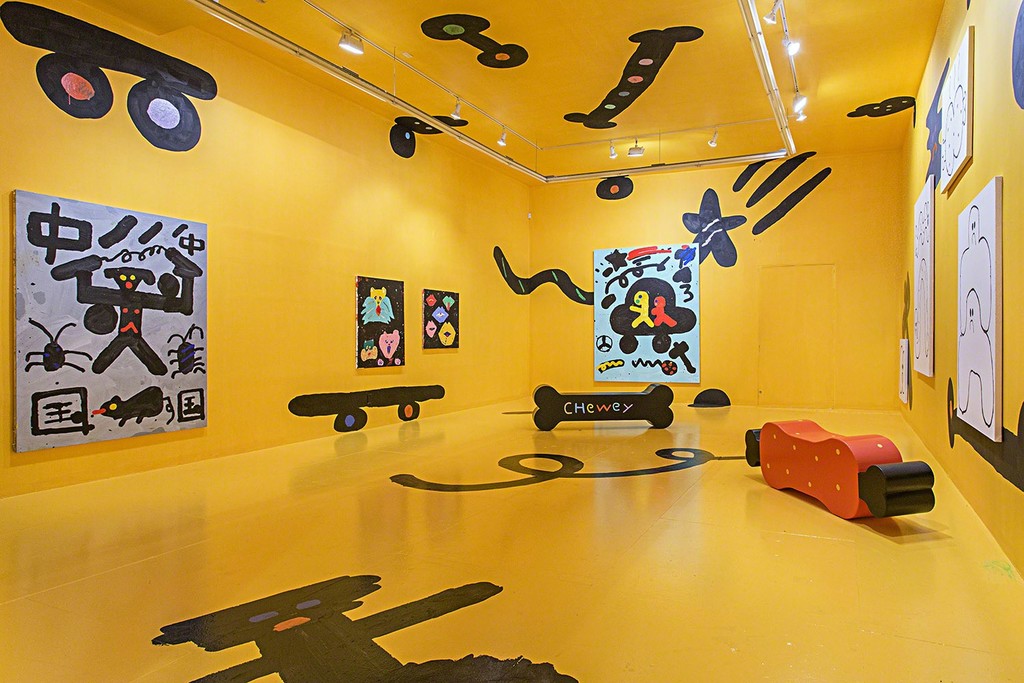 Throughout the space you can sit on painted furniture that broadens her existing repertoire of benches (bananas, boobs and snakes, memorably) here adding bones, meaty bones, lions and tiger benches. From your bone bench you can survey the myriad of paintings in the exhibition; some made with plain black oil stick on canvas that make her playful sketchbook large and lively; others, like the above, with colored painterly backgrounds and an arrangement of black silhouetted shapes across them.

Kawai’s work fits well into Japanese artist King Terry’s appellation of the movement “Heta-Uma” or "Bad-Good", which could perhaps be explained as so "off" or so basic or so wrong that it is right. Her world of personified objects, boobs, butts, animals and plants are all communicated in a rudimentary yet evocative way. Similar to the cave-man like paintings of A.R. Penck, her images are basic and repeated, clowning and obtuse, childlike without being childish. Her oeuvre aligns strongly with Art Brut through the Chicago Imagists to Donald Baechler, but with a distinctly Japanese punk edge. This exhibition began with her travel sketchbooks, and maintains in paint the inventiveness and spontaneity of the small pencil sketches.

Kawai has exhibited widely, in recent years mostly at institutions. She has had a solo show at the Institute of Contemporary Art, Boston (2007); a solo show at one of Japan’s leading private institutions, Watari Museum of Contemporary Art, Tokyo (2006); she was included in “Greater New York 2" at PS1 Contemporary art center, New York (2005); “Fun” at Rhiimaki Art Museum Finland (2012); and presented solo museum exhibitions at Malmo Konsthall (2012) and at the Children’s Museum of Art in New York City (2012) . Major works in the MOCA Los Angeles and the Watermill Center NY have garnered recent attention. In 2009 she was included in “Visions of the Frontier” at Institut Valencia d'Art Modern and “I Believe: Japanese Contemporary Art” at the Museum or Modern Art, Toyama. She has recently exhibited with V1 Gallery in Copenhagen and Loyal Gallery in Sweden, as well as Take Ninagawa in Tokyo; a recent exhibition and solo booth with East Hampton dealer Eric Firestone garnered a lot of attention as well last year. She lives and works in Osaka when not traveling extensively.