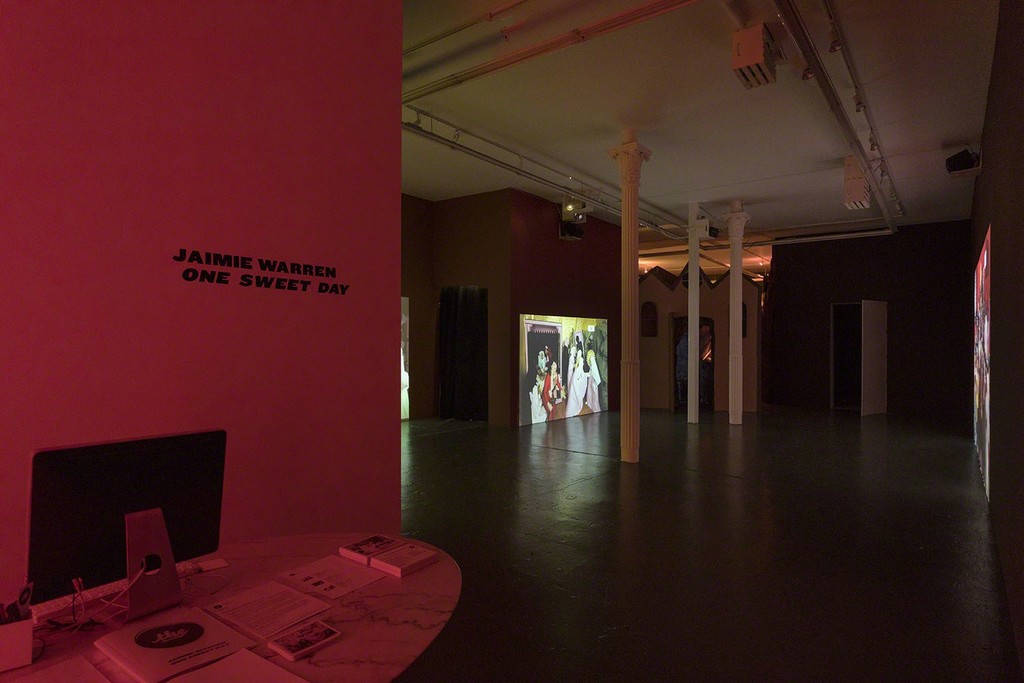 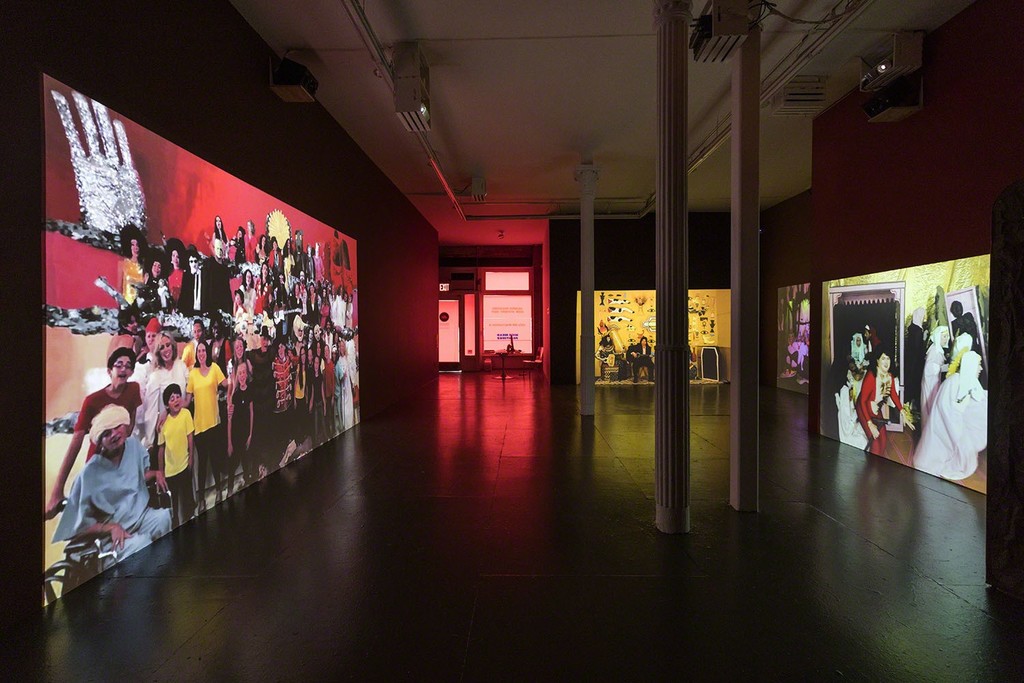 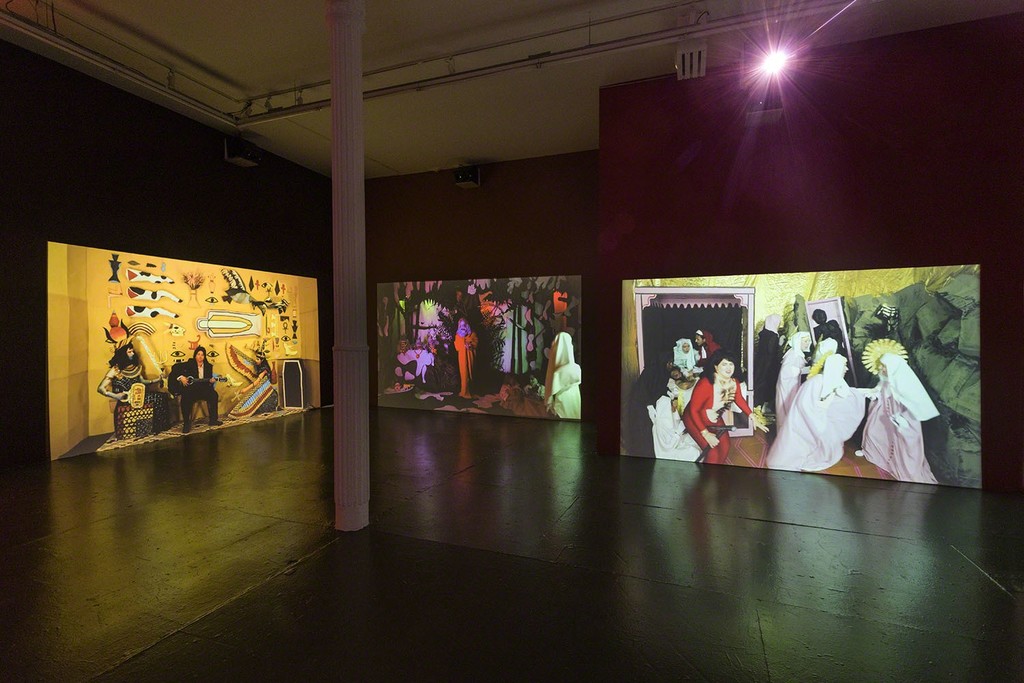 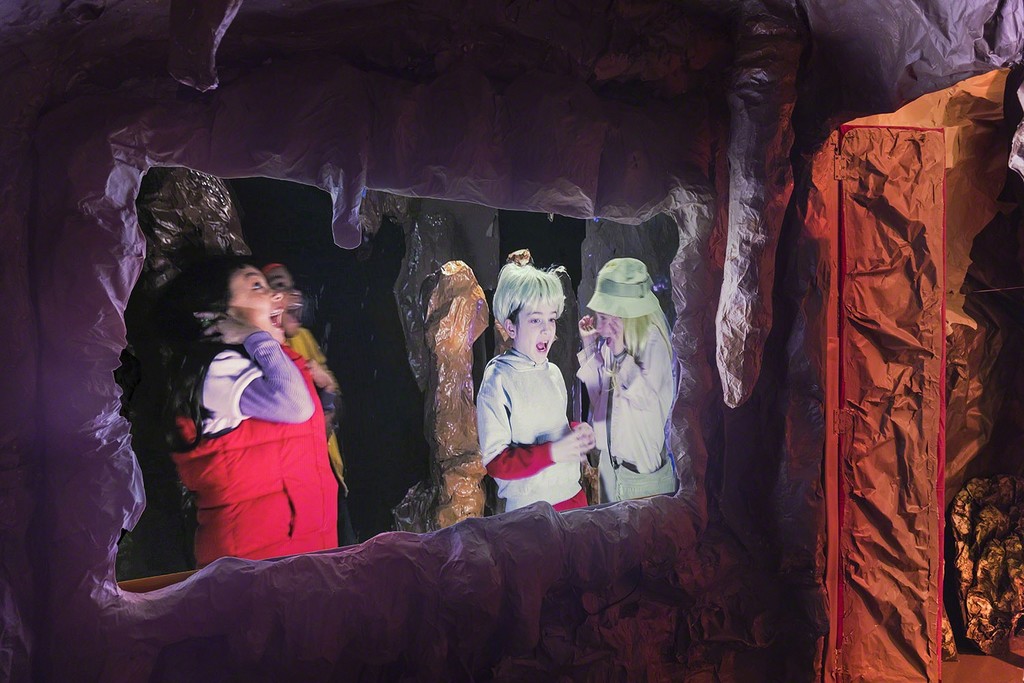 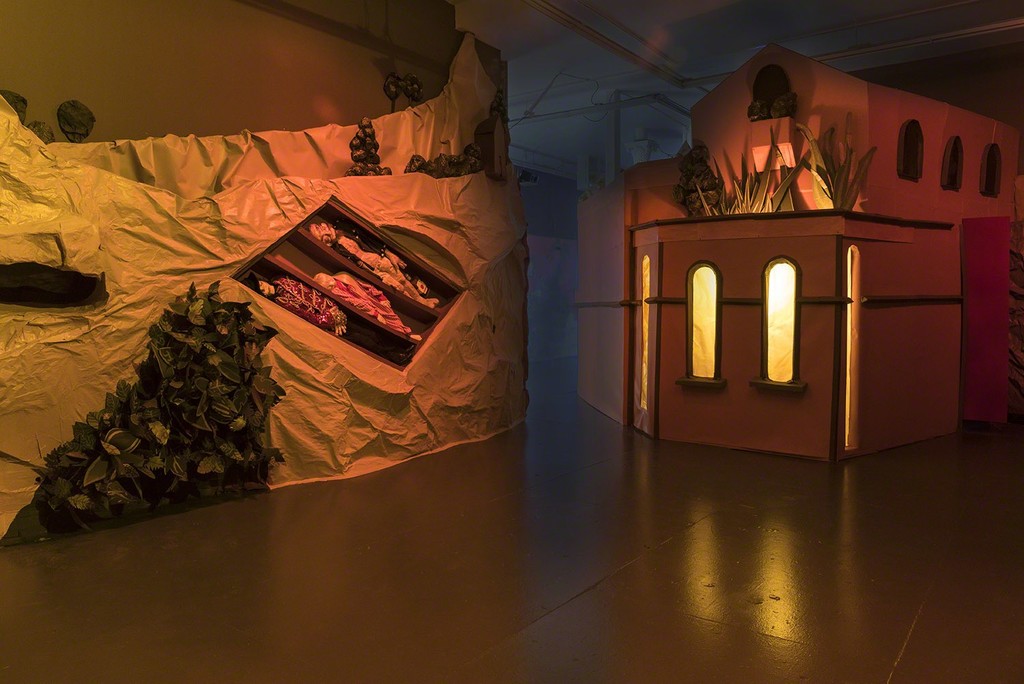 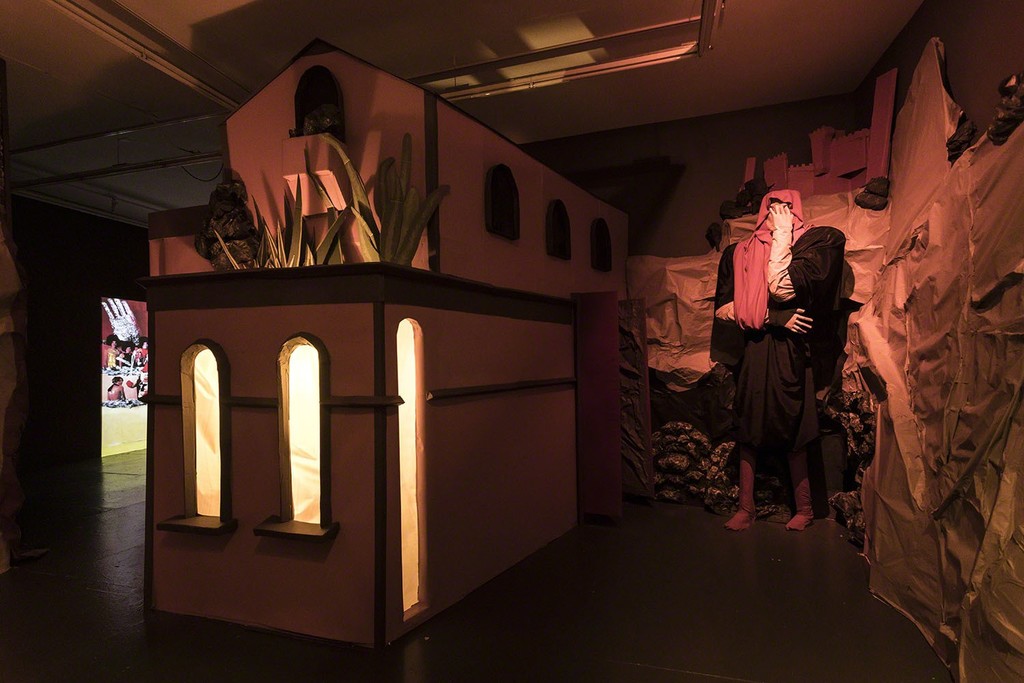 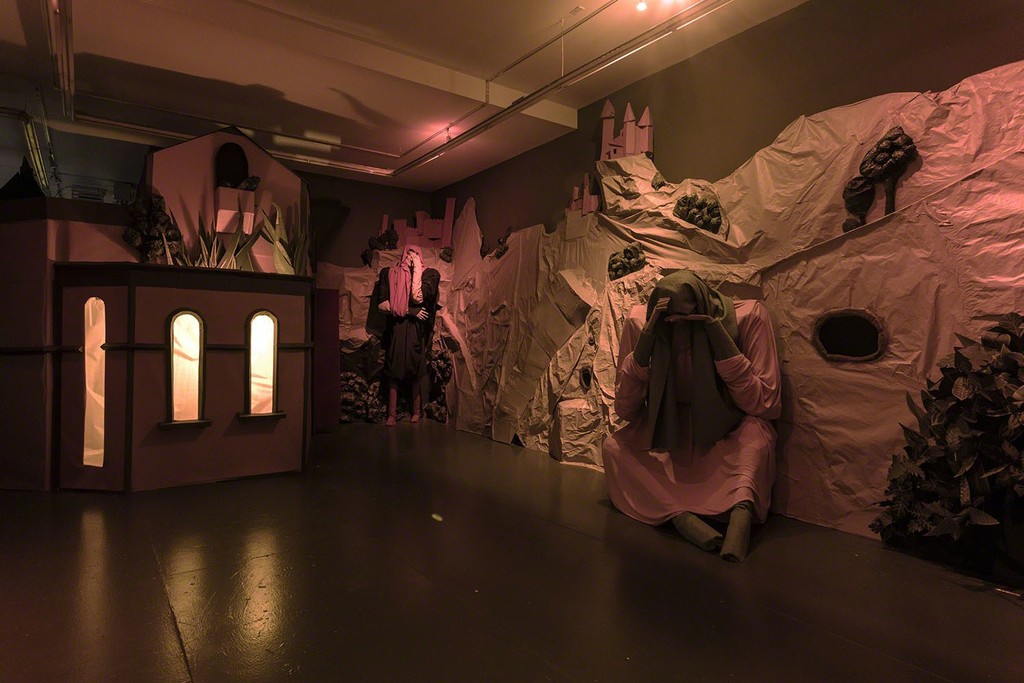 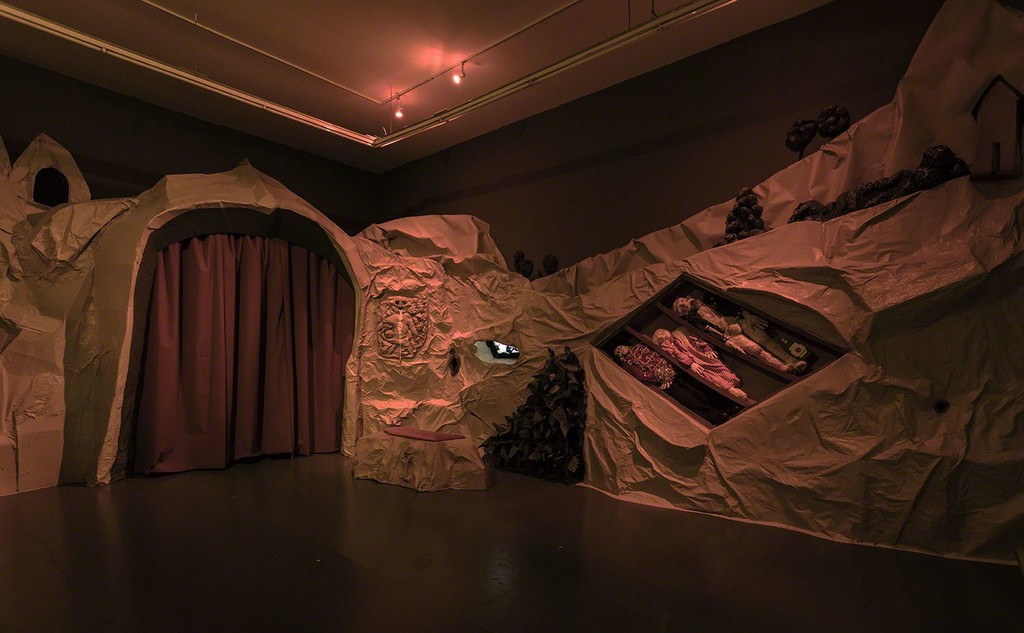 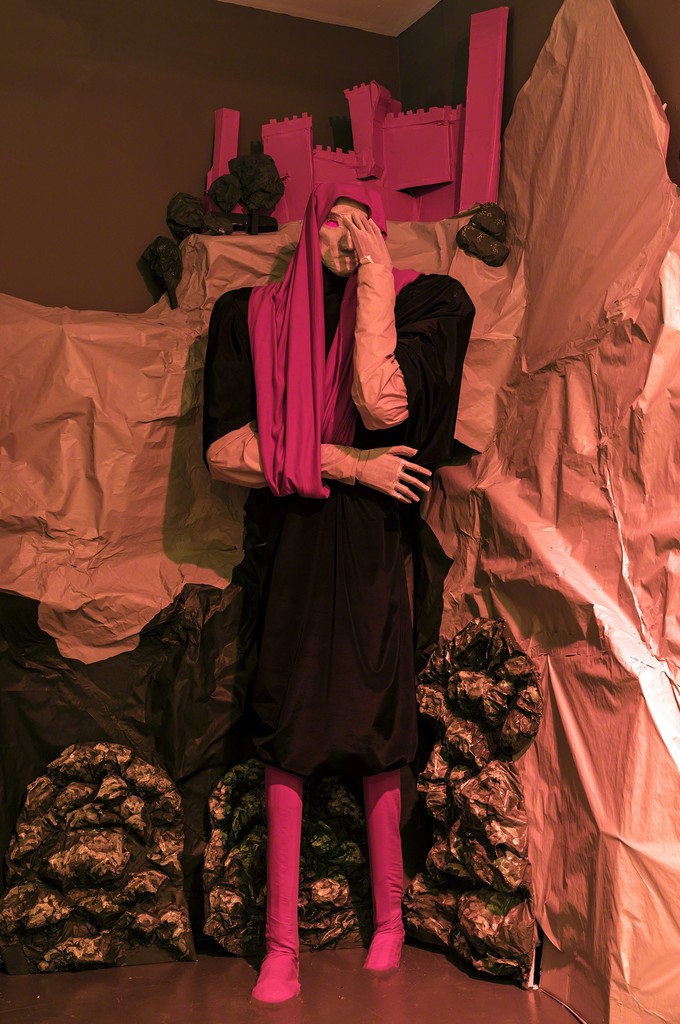 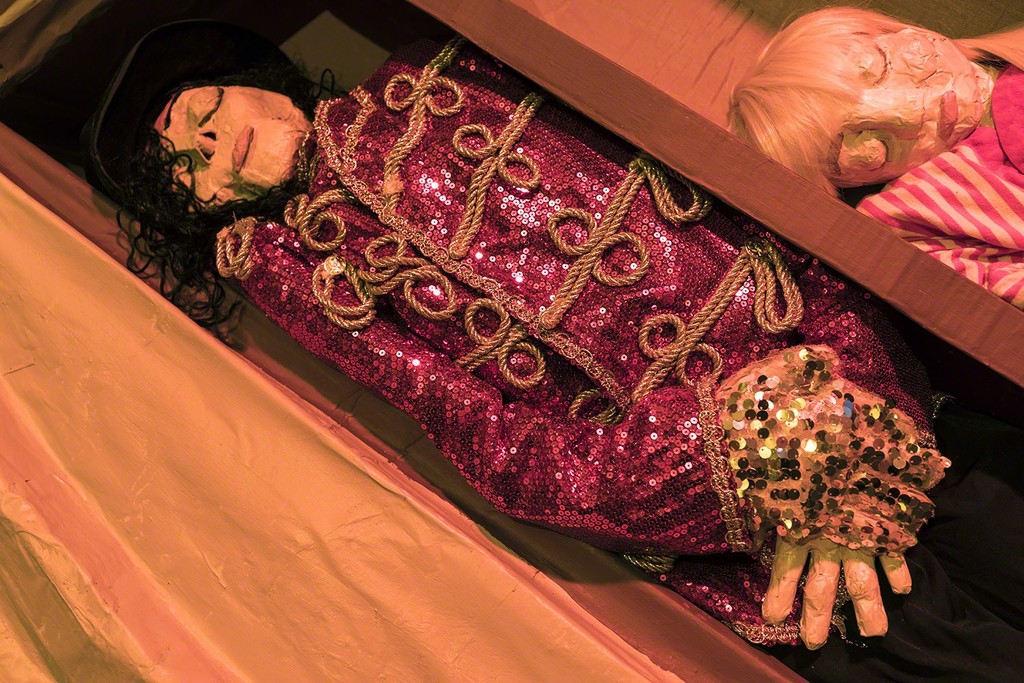 The Hole is proud to announce our third solo exhibition by interdisciplinary artist Jaimie Warren. While past exhibitions have featured photography and video, this show will also include one gallery room completely transformed by installation. The show comprises five major video works by the artist over the past three years.

Our front gallery will feature four video projects and the rear an elaborate and expanded fifth video and installation. These works comprise the bulk of the artist's output since 2014 and were made during residencies across America in collaboration with youth and community groups. The first piece is a mash-up of George Harrison's music video for "Set On You" and a Sesame Street episode about ancient Egypt, and was created at the Abrons Art Center in New York. "I Just Called to Say I Love You: Self-Portrait as Stevie Wonder in re-creation of Primavera by Sandro Botticelli (1482)" which features the Botticelli forest coming to life with Stevie Wonder and assorted scary creatures was made in Raleigh, NC at Artspace. The center wall displays a piece she made at American Medium in Brooklyn where a Medieval altarpiece painting erupts with Freddie Mercury, Saints and relics. Lastly, on the largest wall, Warren presents a mega-work with scores of costumed participants and herself as Michael Jackson in the Helmuth Projects residency from San Diego, CA.

The rear gallery space is accessible through a cave installation inside which the first part of her newest video work will debut. Entering the installation, a medieval forest is re-created as you walk around eight-foot tall saints and pink church walls. Puppets and plants are activated and glowing eyes light up amongst the bushels of hand-painted leaves and trees. Additional scenes from the video are installed around the room, and this elaborate set will be the location of her next major performance piece in the gallery August 17th. This video install and performance is titled "One Sweet Day" and is primarily based on the 80s sitcom "Punky Brewster" intersecting with this Fra Angelico work from 1430 A.D.

Jaimie Warren has been called the "Cindy Sherman of the Midwest" because of her elaborately costumed and staged self-portraiture that look at contemporary female celebrities, archetypes or figures from art history. Hailing from Kansas City, she must have something "Midwest" in there; however, perhaps it is just a nod to her unpretentious attitude and community approach. All of these projects were made in collaboration with her friends and with the public, often students and children. Besides appearing in the pieces these volunteers also help shape them, making decisions about characters, props and action. There are over ninety people credited in the Michael Jackson work, and each project took many months to create. Besides exhibiting artwork Jaimie collaborates with Matt Roche in "Whoop Dee Doo" a fake public access TV show appearing next this fall at SFMOMA and the Knockdown Center in Queens, NY.