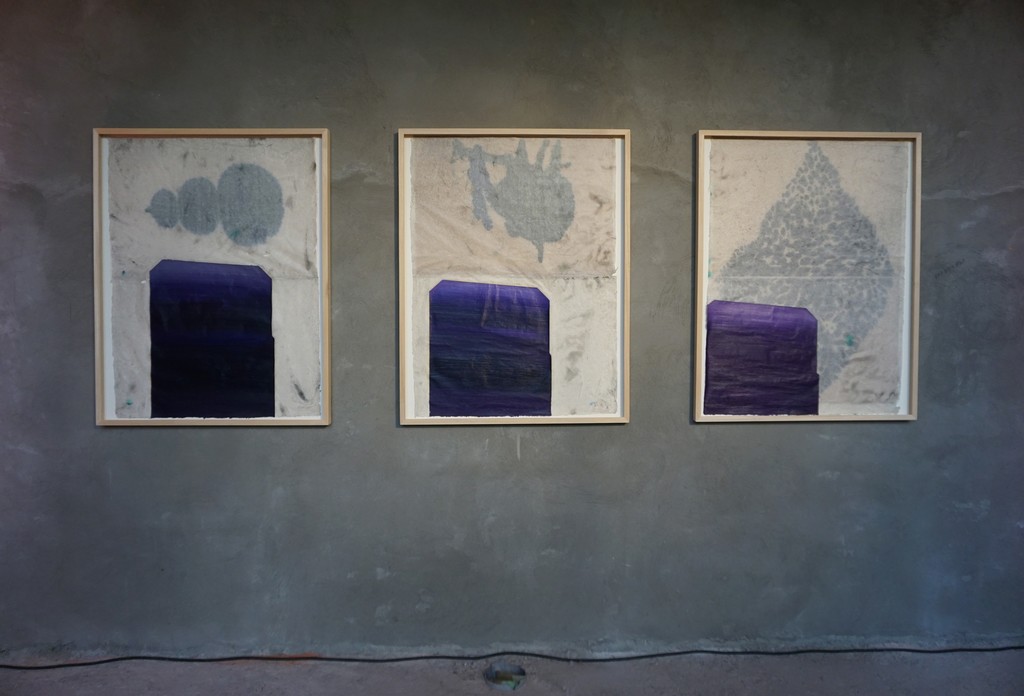 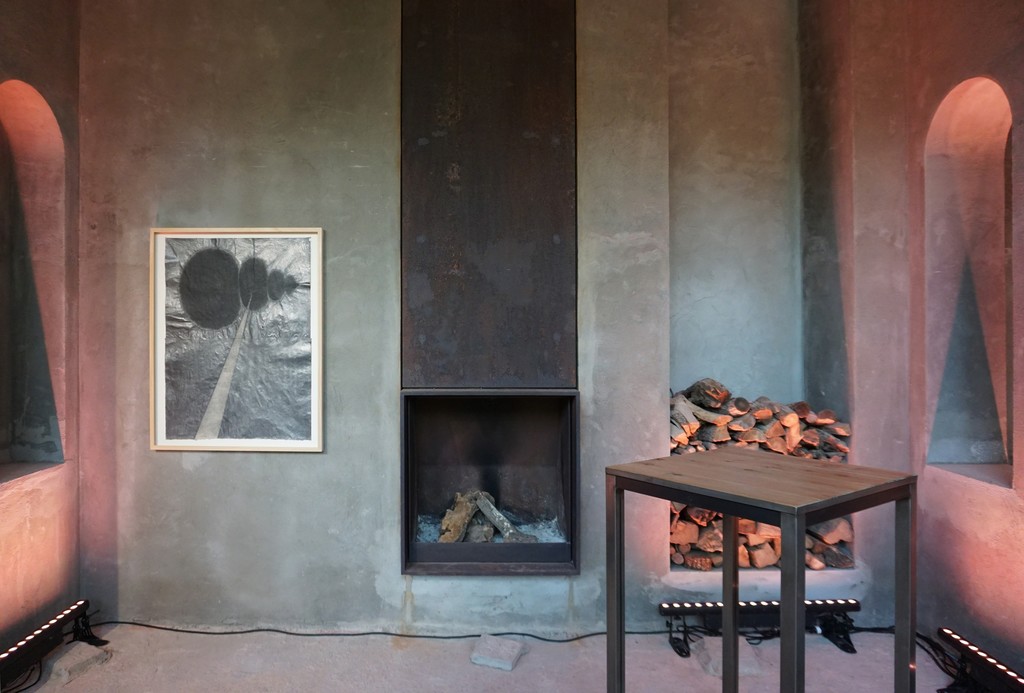 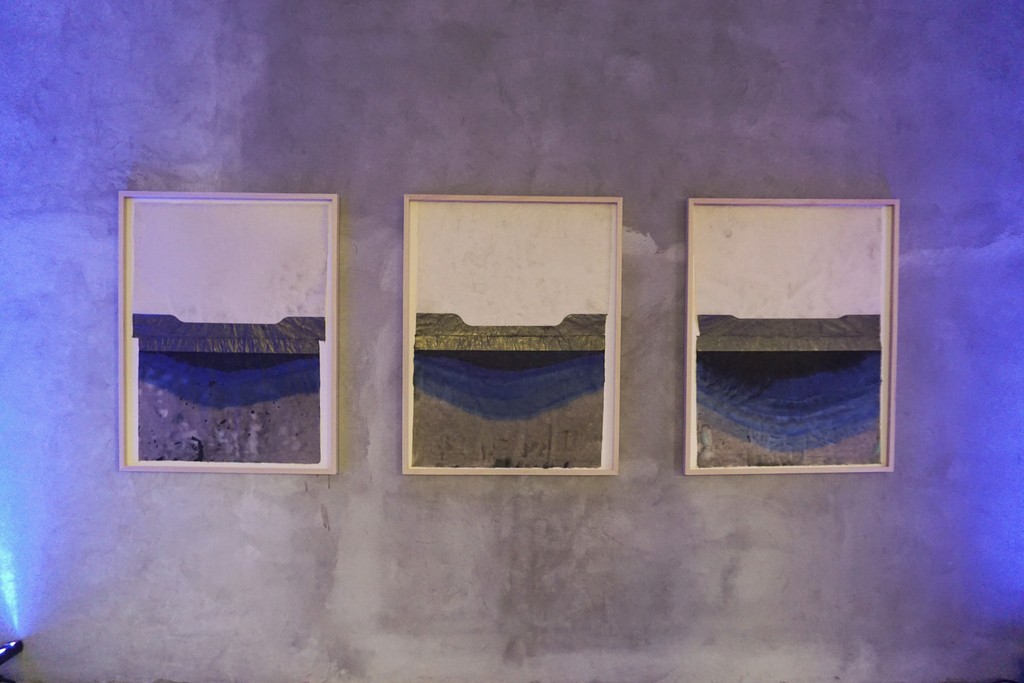 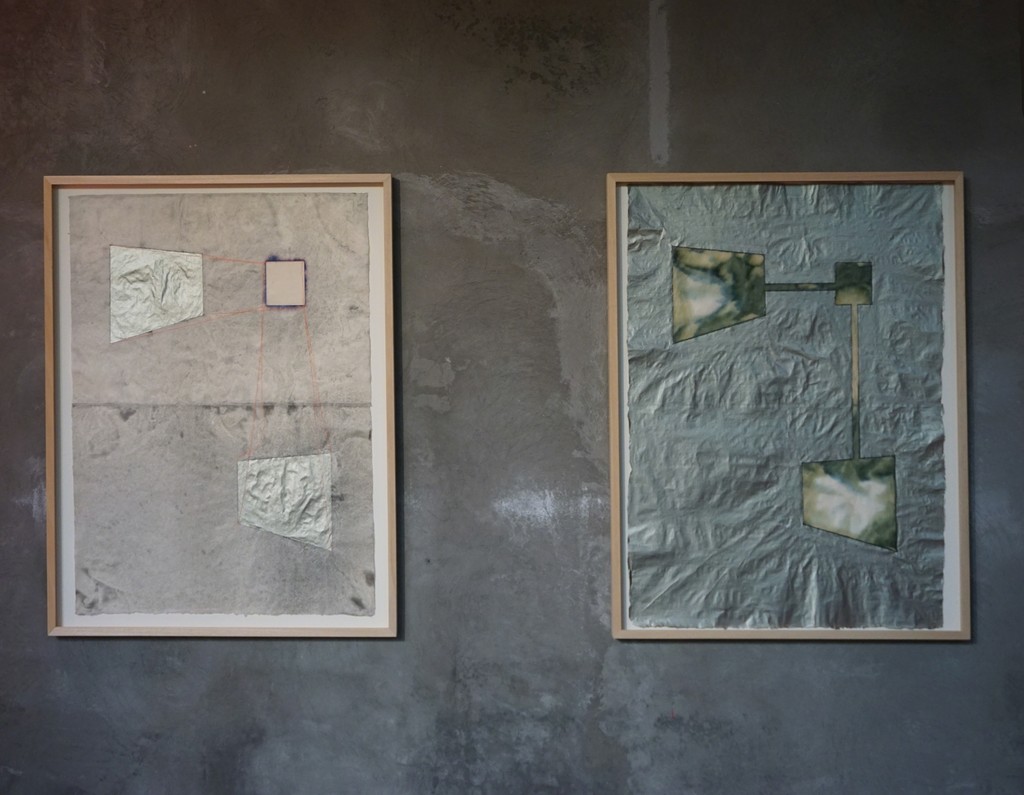 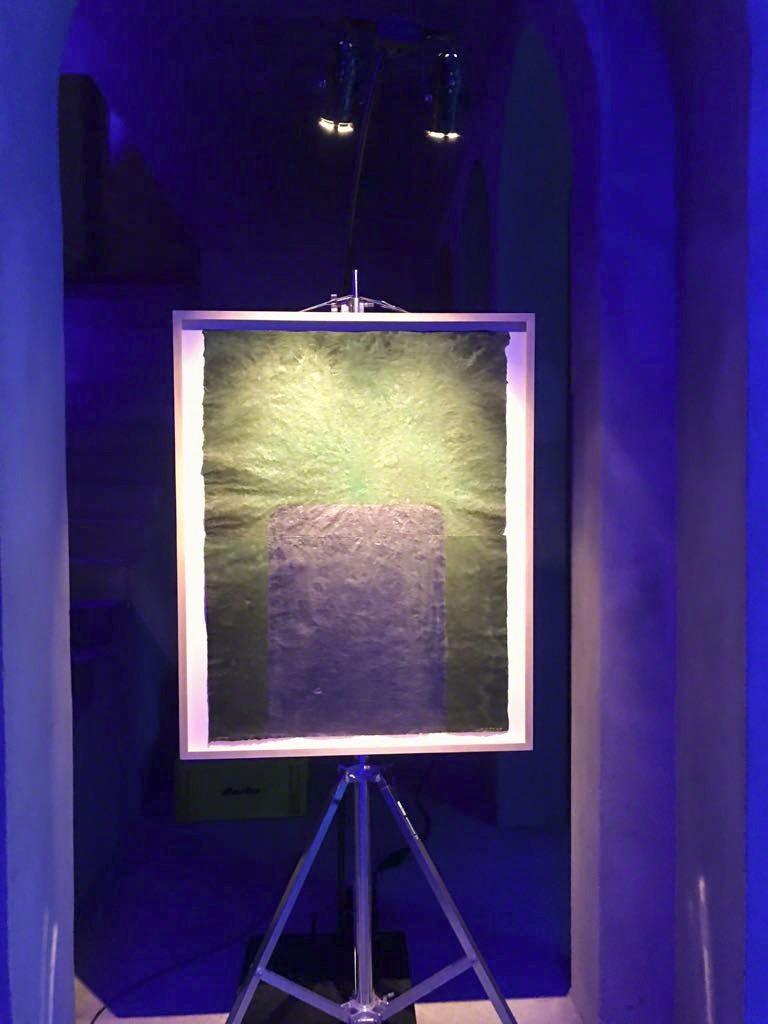 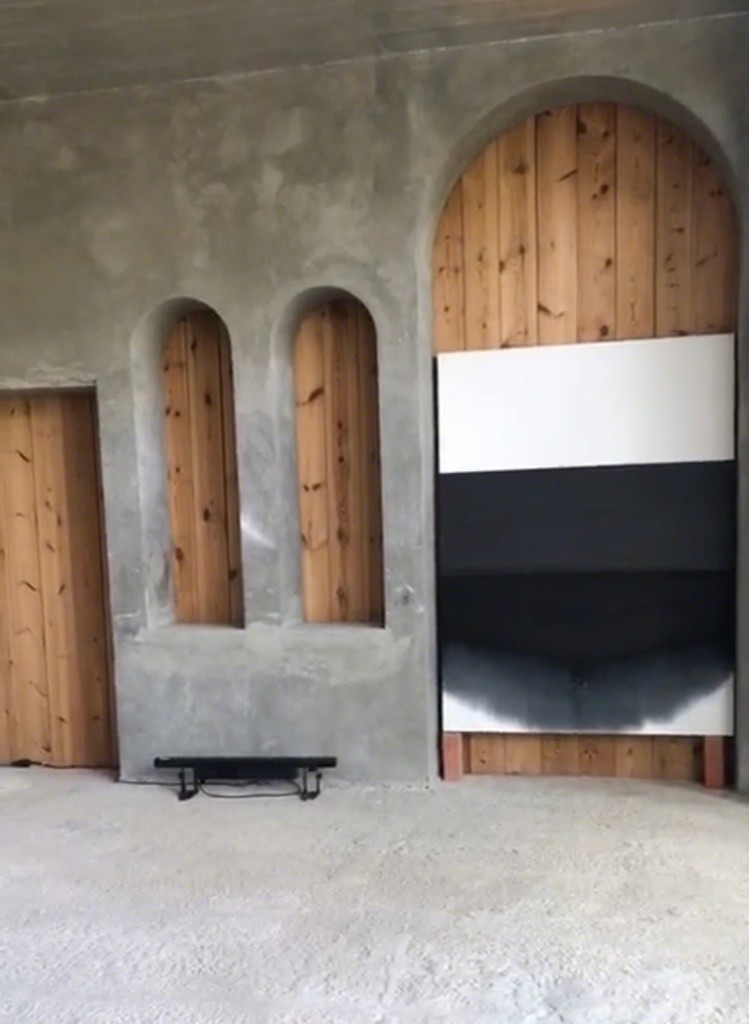 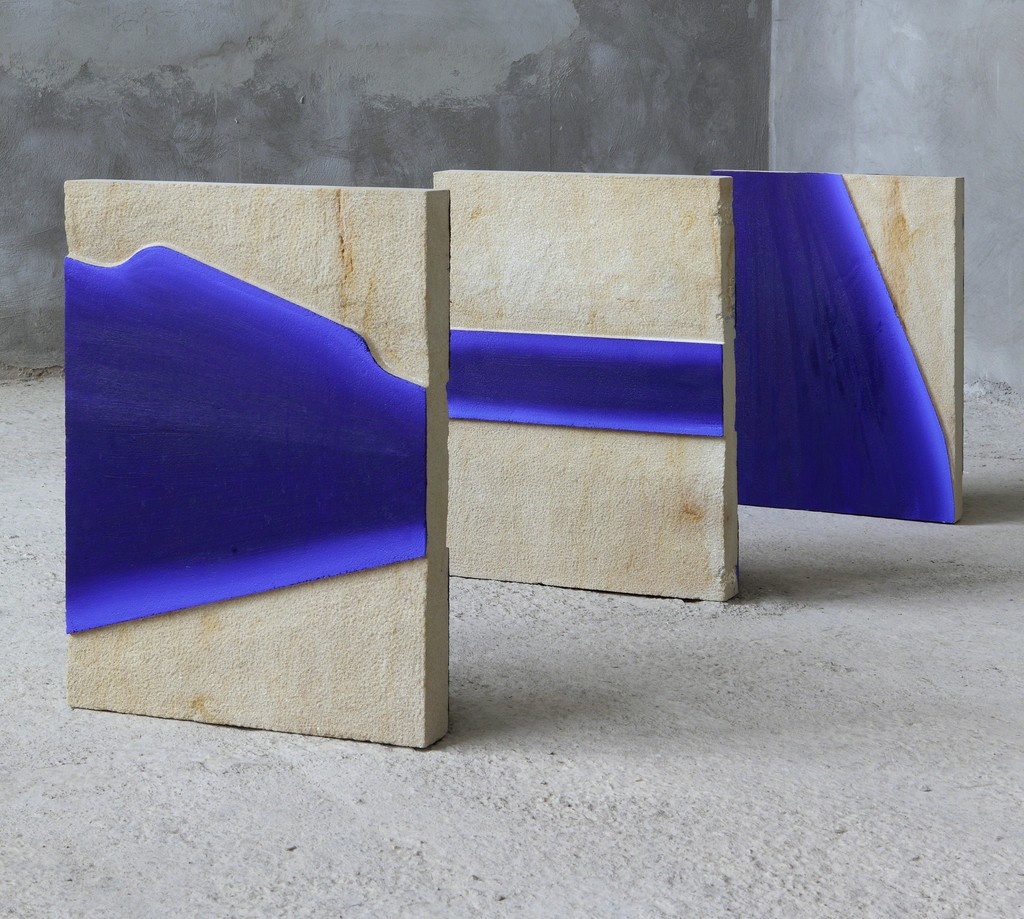 The artist Lluís Lleó was born in his father’s studio, in Guinardo, Barcelona. There, between the study of painting techniques and play in the shadows behind paintings, the young Lluís absorbed everything from his father: the sum of knowledge passed down through four generations of Lleó painters. This included the fresco technique, which requires the painter to work on a surface of freshly laid, or wet lime plaster. Using raw pigments mixed with water, each stroke is irreversible and merges permanently with the plaster to become an integral part of the surface as it dries. It is precision painting, with little margin for error, pigment and substrate are resolved magically into a singly unified piece. The resulting works are solid but vulnerable, in essence deeply mysterious.

At the age of 27, Lleó struck out across the Atlantic, ready to make his own mark on a new continent. Settling in a tiny garret in Manhattan, he caught the attention of the sculptor Xavier Corberó, and was introduced to the career defining art critic Robert Hughes. Over weekends with Hughes in Shelter Island, Lleó mixed with numerous giants of the American art establishment such as Ellsworth Kelly, Frank Stella, Louise Bourgeois, and continued to absorb it all.

“His work … signals a healthgiving shift away from art that is about other media, that is conceptual, not physical, that denies the body (including that fundamental metaphor of the body, so eloquently celebrated by Lleó, pigment itself). This shift goes towards an art that is complex but nevertheless seeks a straightforward and anti-ironical link to the natural world…” Robert Hughes

Alone, from his little studio on 37 Bridge Street, Dumbo, and then a lofty warehouse on 610 Smith Street in Red Hook, Lleó dedicated his days to evolving and adapting his own fresco technique, using a variety of materials including oil and ink in fresh and surprising ways across different media. In contrast to his concrete urban surroundings, Lleó was repeatedly drawn to natural materials, such as wafer thin hand pressed paper from Nepal, or Irish linen, into which he invested a unique lexicon of biomorphic and geometric forms: bulbs, tunnels and parallelograms. These shapes were somehow hewn out of their environment - like the windows of the new Whitney Museum - and reimagined in hovering lozenges of rich monochromatic colours. For the artist, painting became a sanctuary and respite from the harsh reality of city living. This appealed to an expanding group of collectors, drawn to his works that intertwine the complicity of a magnetic first glance with a final sense of mystery.

“Art is mystery and production is the enemy of this… To me museums where like like giant sad cemeteries .......zoos for once wild dreams. Caged adventures viewed in silence by morbid visitors. I always imagined that art should be exposed, absorbed, erased, used, destroyed, transformed, and rebuilt by those who use it. ”

But the painter never truly felt at home in the sheer verticality of the place, all hard edges and dark angles. He dreamed of seeing something miraculous and alive, like a butterfly in the subway, and started to imagine his paintings outside. This vision was born out of a new material he had started experimenting with: sandstone. Hewn from the quarries of his homeland, this richly porous rock was ideal for carving and generously accommodating to his inimitable fresco technique.

“What is art if it's not vulnerable? To me absolutely nothing. That's probably why I did paintings on stone. To see them "suffer" like we all do. To see them be loved by the sun, the morning mist and the afternoon breeze. Battered by storms and colonised by ants, birds, flies, bugs…”

For a painting to live outside, the paint must become an integral part of the surface, strong as stone. Brilliant blues and cadmium reds soaked generously into its pores, following the contours of signature shapes he had carved into these giant blocks. They were like erratics from another dimension, spectacular and completely arresting but also timeless. Several private commissions brought these works to life in stately homes and then one day, with the help of his gallerist from Miami, Mali Parkerson, Lleó won the prestigious Park Avenue commission.

For an installation to be sited on this fabled avenue in New York, in front of Mies van der Rohe’s iconic Seagram Building, detailed technical plans need to be made that account for the maximum load baring weight of 8,000 lbs. With a tunnel for trains leaving Grand Central underneath, a mistake could be catastrophic. Lleó discovered that the advantages of sandstone, its porous malleability, presented numerous obstacles, namely their capacity to absorb hundreds of pounds of rainwater. During months of preparation, Lleó had nightmares about the stones not holding up, cracking or breaking ground. So like a prayer, he inscribed on the underbelly of each tablet “Please do not break.” This last gesture a potent reminder that each artist is the protagonist in their own imagined adventure.

Once installed “Morpho’s Nest in the Cadmium House” was celebrated for how these “freestanding frescoes” gave the impression of “floating abstract shapes of brilliant colour.” Following this career milestone, Lleó was offered a museum show in the Tecla Sala, Barcelona which he realised in a series of giant rippling papers “All Mighty Pencil,” and the artist decided it was time to go home.

Lleó's return is fittingly celebrated by the Mayors office with a public commission on the prestigious Avenida Diagonal, equivalent to the Champs Elysees in Paris and Park Avenue. Six monumental outdoor frescoes will be sited, in two groups of three, on both sides of the main entrance of Palau de Pedralbes. It is the main artery of one of the most creative cities in the world, pumping and flowing with life.

“In a way unprotected outside stones are a metaphor for the artist’s life. Your art is your life. Your life is your art. Both are vulnerable, a good reason to die for..... No agenda, no strategy..... Just a straight thin line from the beginning to the end of life.”

Like the miracle of sandstone itself, comprised of millions of particles of smashed rocks compressed together over time into a single stone, these extraordinary outdoor paintings - monumental frescoes - art and artist are represented in one timeless and enduring work. They are a testament to the unfaltering imagination of an artist who followed his dreams and found a way to bring them home.