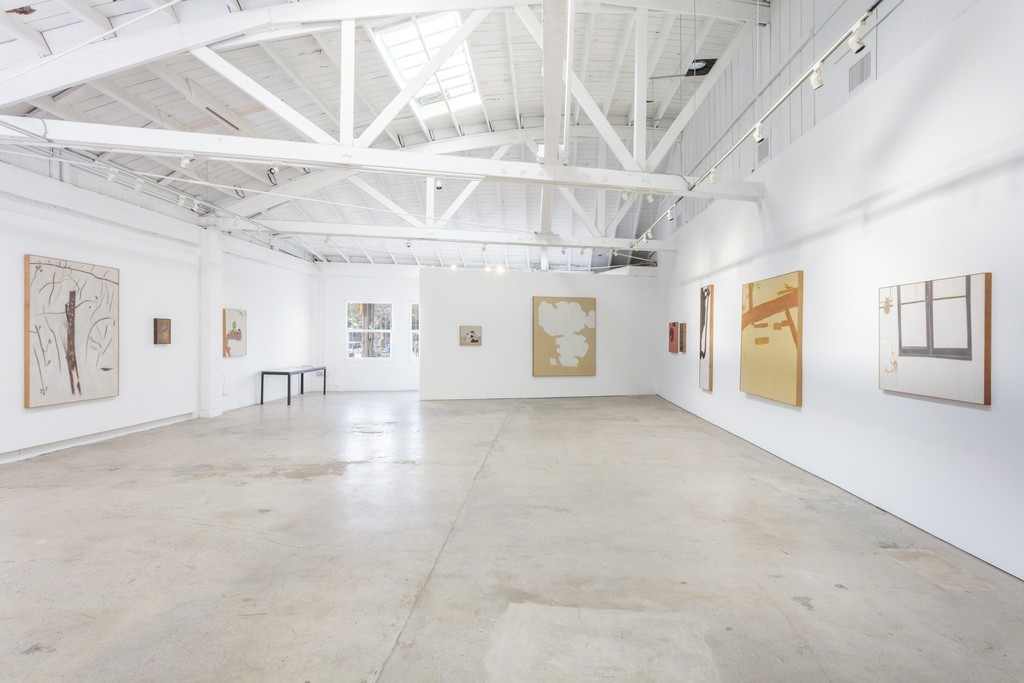 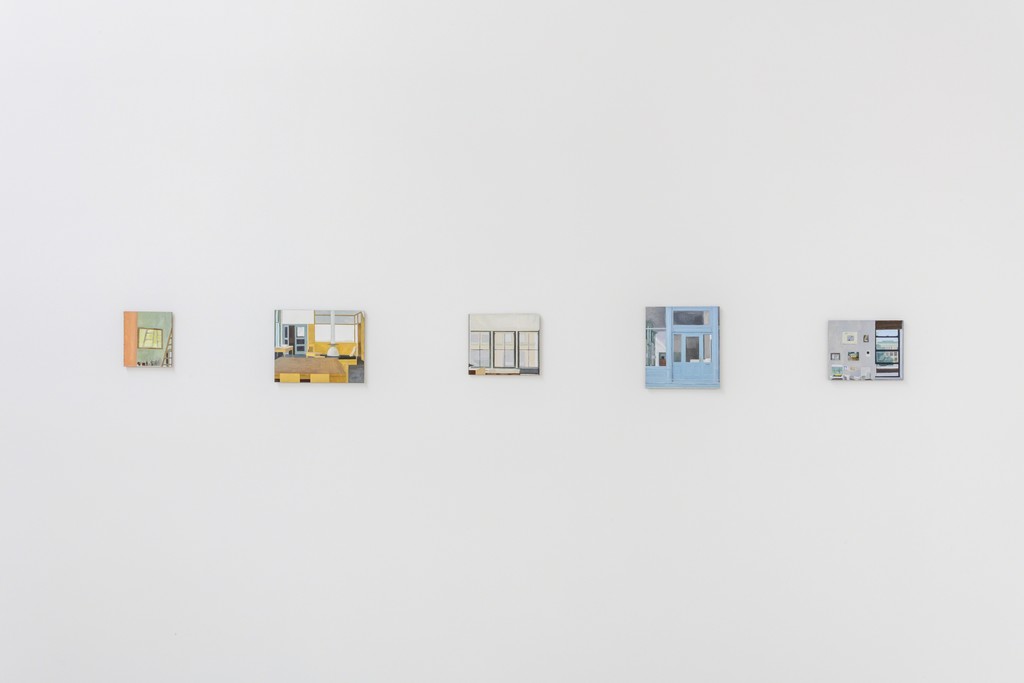 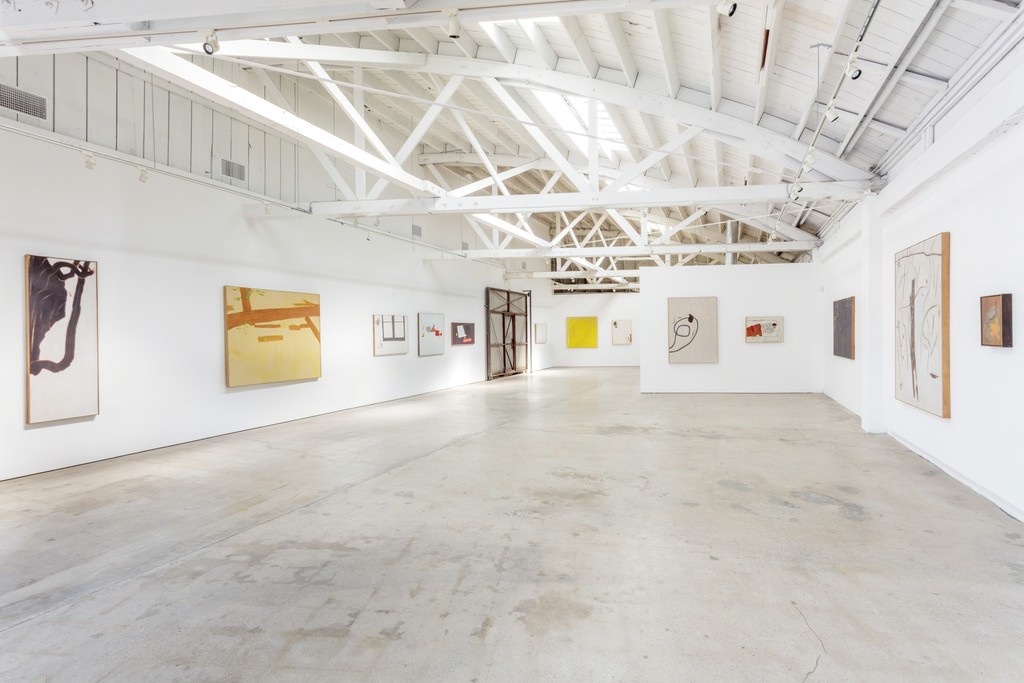 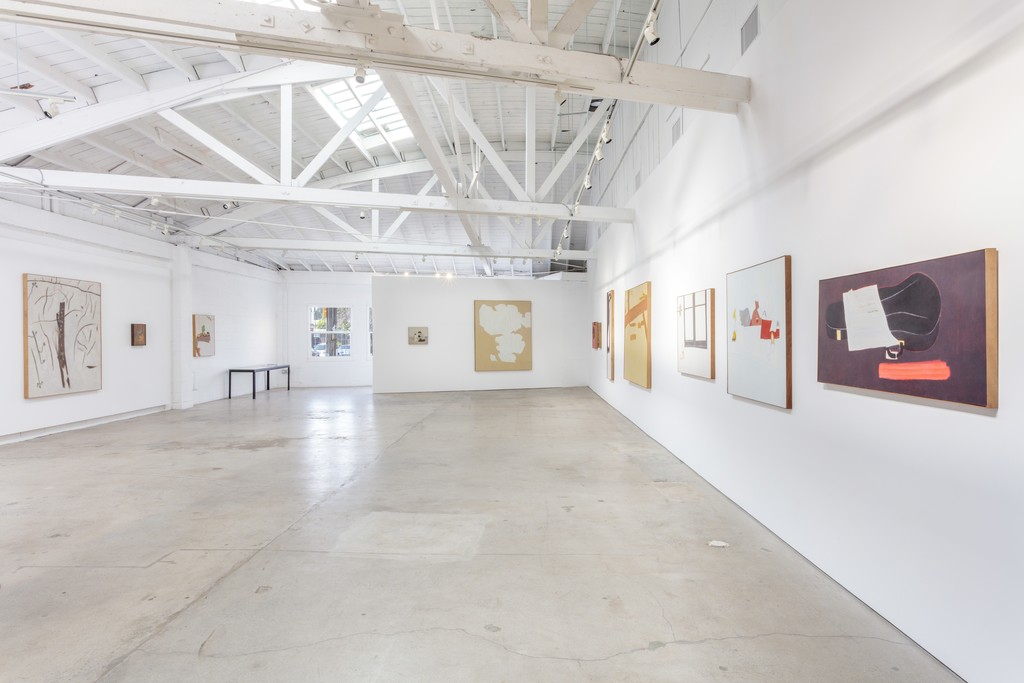 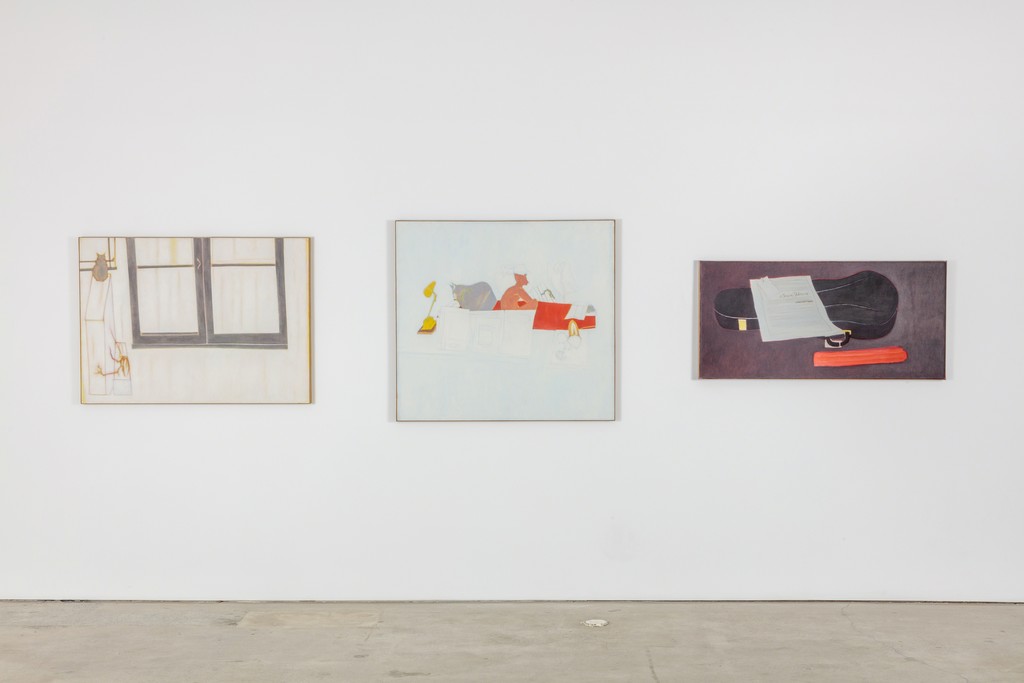 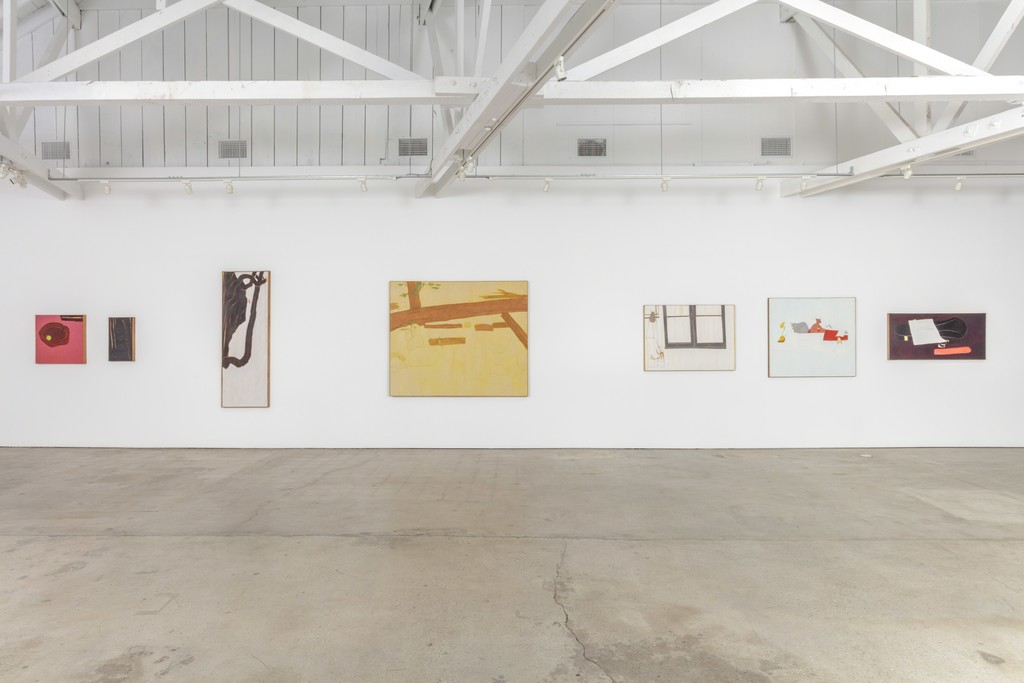 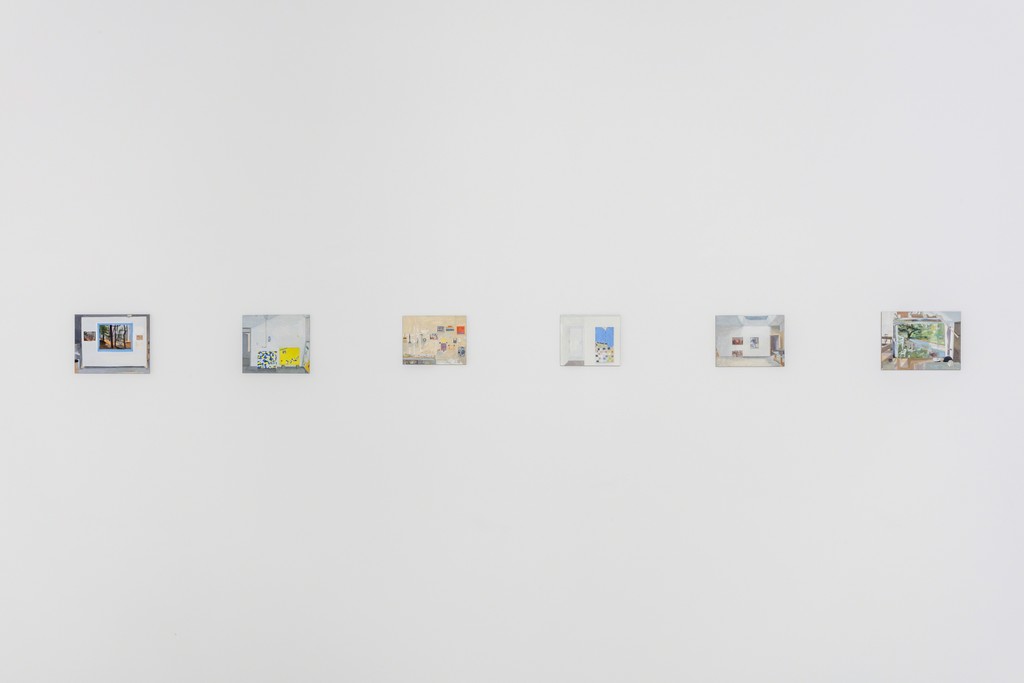 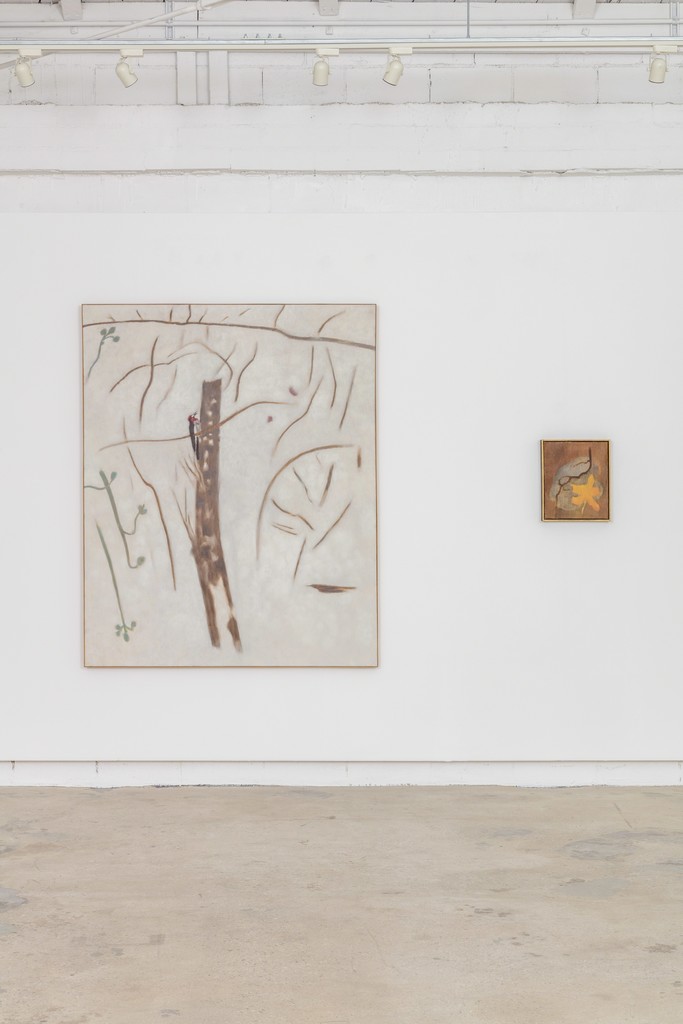 In 1947, Fred Reichman took a summer course at the San Francisco Art Institute that was taught by artist Clyfford Still. At the end of the course, Still encouraged Reichman to pursue a career as an artist. Soon after, Reichman enrolled in art school at UC Berkeley. Though Reichman emerged when Abstract Expressionism was the reigning aesthetic in both the Bay Area and New York, the young painter chose to create works based in his own style, focusing on the intimate, quiet and curious in the space around him. Plants, pets and furniture seemingly float across Reichman’s soft, sparse backgrounds, which use only scant details to define each scene. Every work is so quietly full of pathos that one might imagine having stumbled across each kitchen, bedroom or backyard in a familiar and personal setting. Reichman’s paintings depict a world quietly teeming with movement: in it, clouds shift their shapes overhead, a cat arrives at the back door, or his daughter’s violin case leans casually and forgotten against a wall. Viewing his work today, it appears as timeless and as singular as it always has; his paintings are perpetually perfectly out of sync with the present.

Eleanor Ray, who studied at Amherst College and New York Studio School, has similarly resisted the reigning aesthetics of her time, choosing intimate subject matter over the eccentric figurative or process-based abstract painting styles more common among her contemporaries. The delicate scale of her works draws the viewer in, and her attention to detail and skilled hand invite the viewer to stay close. Ray’s subject matter is primarily architectural interiors and exteriors of personal importance. Her canvases are void of figures, and yet a kind of human presence lingers in them, as if an individual as just stepped out of view.

Both Reichman and Ray exemplify a generous sort of art, one that is more concerned with making sense of what one sees than it is with an interior emotional expression. The paintings invite the viewer to draw on his own experiences, and viewing them can feel like peering through a window at a scene somehow familiar. In addition, the works included in this exhibition reflect each artist’s interest in the home and studio as a subject. In Reichman’s “In the Studio Stretching New Canvas,” the painter depicts his own working space with quiet praise, decorating his room with an airiness and rare amounts of bright San Francisco sunshine. And in “101 Spring Street Exterior II,” Ray depicts the front of Donald Judd’s recently refurbished home and studio at 101 Spring Street. In it, Ray deftly conveys the feeling of standing in a quiet, grey SoHo morning before the streets flood with people, and the work, like Reichman’s, gently celebrates a building in which works of art are made.

Eleanor Ray (b. 1987) has had three solo exhibitions with Steven Harvey Fine Art Projects in New York. This is Ray’s first exhibition in California.