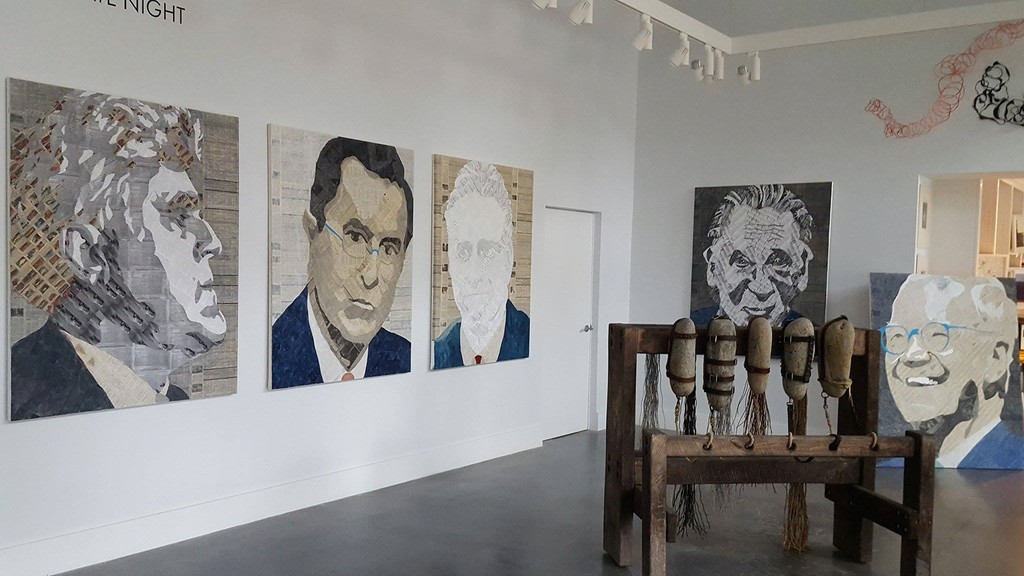 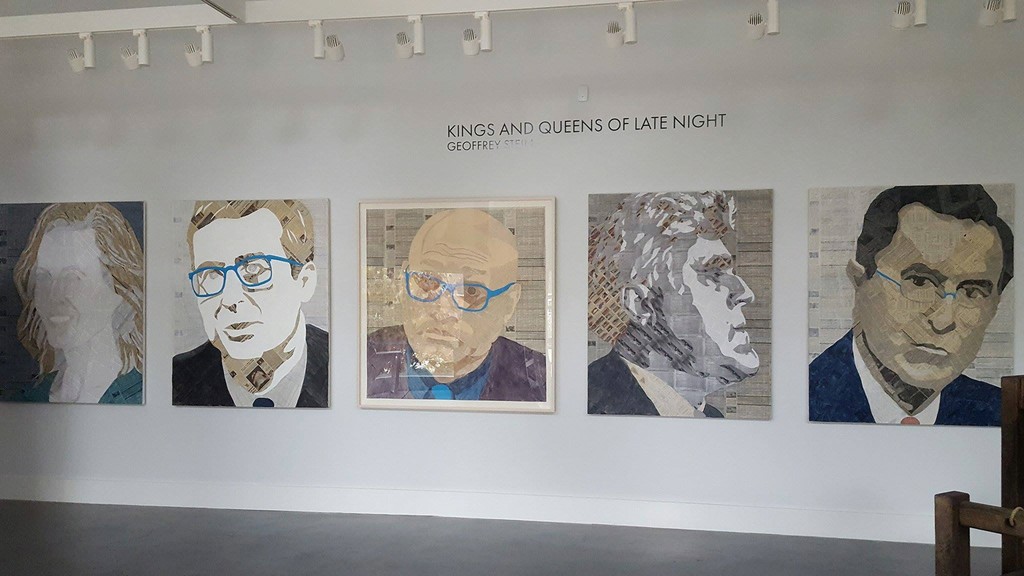 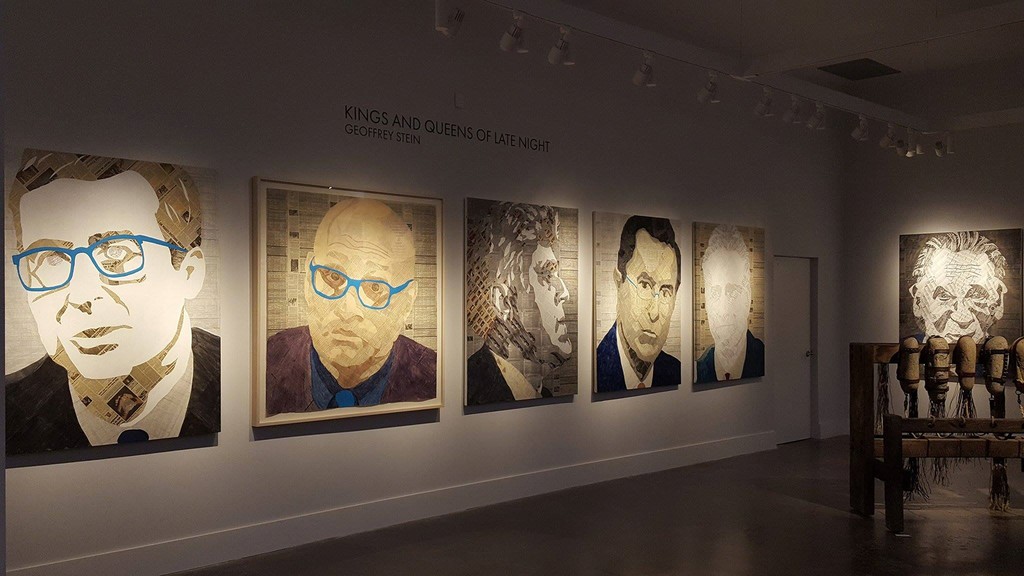 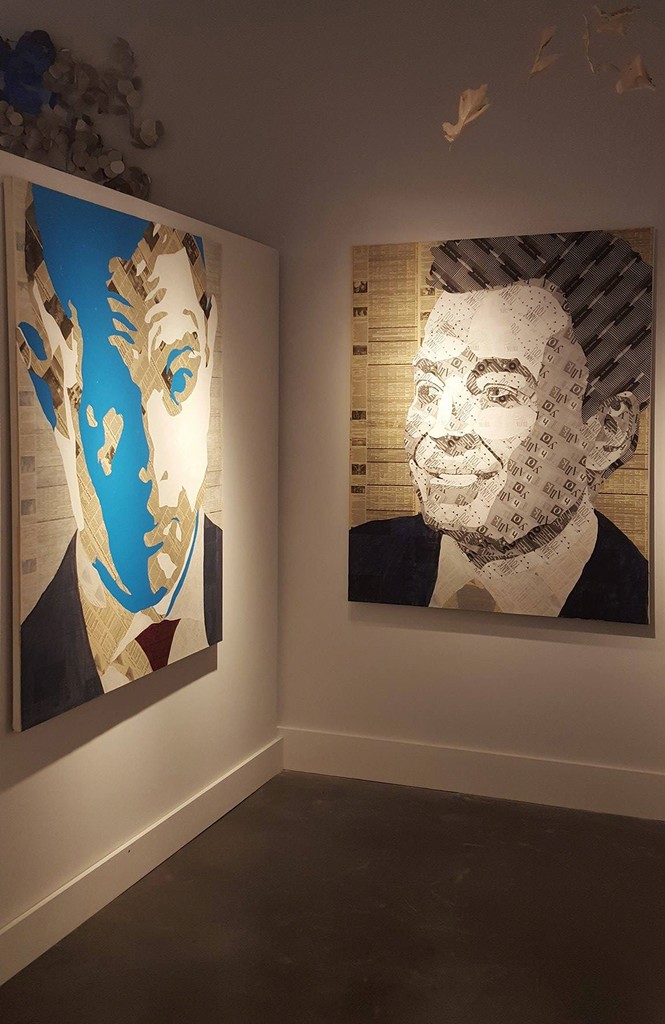 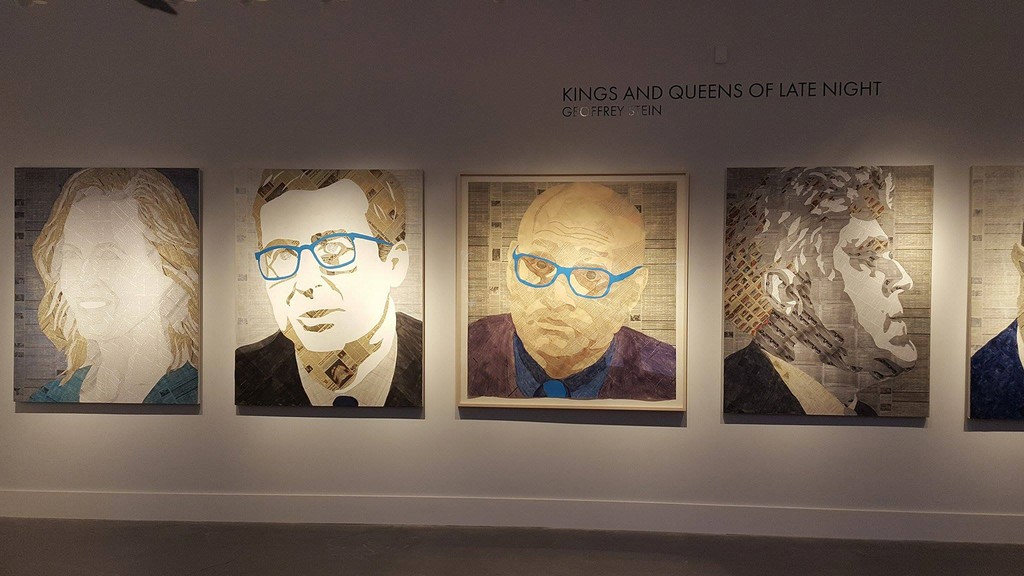 New work by Geoffrey Stein
at The Lionheart Gallery

What trumps artist and “recovering lawyer” Geoffrey Stein’s 2015 mixed-media-on-paper portrait of Donald Trump, created with materials from the presidential candidate’s third of four corporate bankruptcies?
Stein’s magnetic and masterful portraits of the late night comics who have been making a living by shredding the @realDonaldTrump for the fits and foibles of a campaign, and life, that begged to be lampooned.

In his new show at The Lionheart Gallery in Pound Ridge, N.Y., “Kings & Queens of Late Night,” running from November 6 to January 2, 2017, Stein paints collage portraits of an all-star cast of network and cable comedy and punditry.

“The late night comic portraits grew out of my attempt to recover from making “Trump Bankruptcy Collage,” the artist says. “The Bankruptcy Collage was a large piece, 62 x 72 inches, and it took a over a month to finish. After it was done and shown at The Lionheart Gallery, I was watching Larry Wilmore on the Nightly Show and thought it would be nice to do a portrait of someone whose work I admire.”
Stein, who made his first collage portraits in the 1990s, uses materials from the subject’s world to create their likeness. “This is a modern take on the renaissance tradition of putting objects into a portrait to illustrate the attributes of the subject, for example books to show the subject was educated, a dog to show loyalty or furs to show wealth,” he explains.”

Examples from this exhibit include Jon Stewart’s portrait made with the 9/11 Responders’ act he championed, Amy Schumer done with her cousin Chuck Schumer’s Gun Control bill, Jimmy Fallon created from thank you cards, and John Oliver done with USA Today and the London Tube Map.
Stein, who lives and works in New York City, received an MFA from the Slade School of Fine Art in London and has been painting full-time since 2000. Before that he was an attorney, and the story is fascinating:

“I have always made art. I made wood and metal sculptures as a kid, worked as a photographer for the local paper in high school, and briefly studied product design at Parsons. After graduating from Bard Collage, and looking for a job in New York during the recession of 1983, I fled to law school.
I was a reinsurance litigator for 12 years. During that time, I failed for 10 years in my attempts to combine art and practicing law. In 1999 my wife heard me complaining, again, about being a lawyer. We don't have kids, and she said if you want to paint, go paint. But if you don't do it, you can never complain about being a lawyer again. So in Feb. 2000 I quit my law job and started art school at the New York Studio School.”
Proficient across the media of drawing and painting—and devoted to making pencil and conte life drawings to stay sharp—Stein engages in a dialogue between abstraction and realism as he carefully balances presences and absences in portraying subjects to “find out what I think about the world,” as he says in his artist’s statement.

“On a formal level I think of these portraits as being about the act of seeing,” the artist says. “Brush strokes and discernible features hover over newspaper, abstract strokes, and solid blocks of color. The paint's behavior fluctuates between creating and disrupting the face the viewer has been conditioned to seek. Often, faces are missing “parts”—eyes, cheeks, noses. As the faces and figures give way to the marks, collages, and erasures beneath them, the presence of so many layers forms a record of the experience of seeing and describing.”

The Lionheart Gallery exhibit is a departure for Stein in one sense. It’s the first show he has directly painted toward, rather than showing an accumulation of works that ultimately gelled thematically.
“I am also making GIFs of each portrait, which show a photo of the painting at the end of each day, like a flip book,” the artist says. “The GIFs introduce a time-based element into the portraits, which interests me.”

In addition to his MFA from The Slade School of Fine Art, 2007, and New York Studio School Certificate in Painting, 2004, Stein has a law degree from Albany Law School, 1986, and a Bachelor of Arts degree from Bard College, 1982. Among his most recent awards is a 2016 Juror’s Prize, Best Mixed Media, Art Show Bedford. The juror was Peter MacGill of Pace/MacGill Gallery.

General Information
The Lionheart Gallery is open Wednesday through Saturday, from 11 a.m. to 5 p.m., and Sunday from noon to 5 p.m. For more information and directions to the gallery at 27 Westchester Avenue in Pound Ridge, N.Y., visit http://www.thelionheartgallery.com or call the gallery at 914.764.8689.
Exhibit Programming

An opening reception for the exhibit is scheduled for November 12, from 5 to 8 p.m. Geoffrey Stein will participate in a salon-style talk November 20, beginning at 2 p.m. Call the gallery at 914.764.8689 for details.