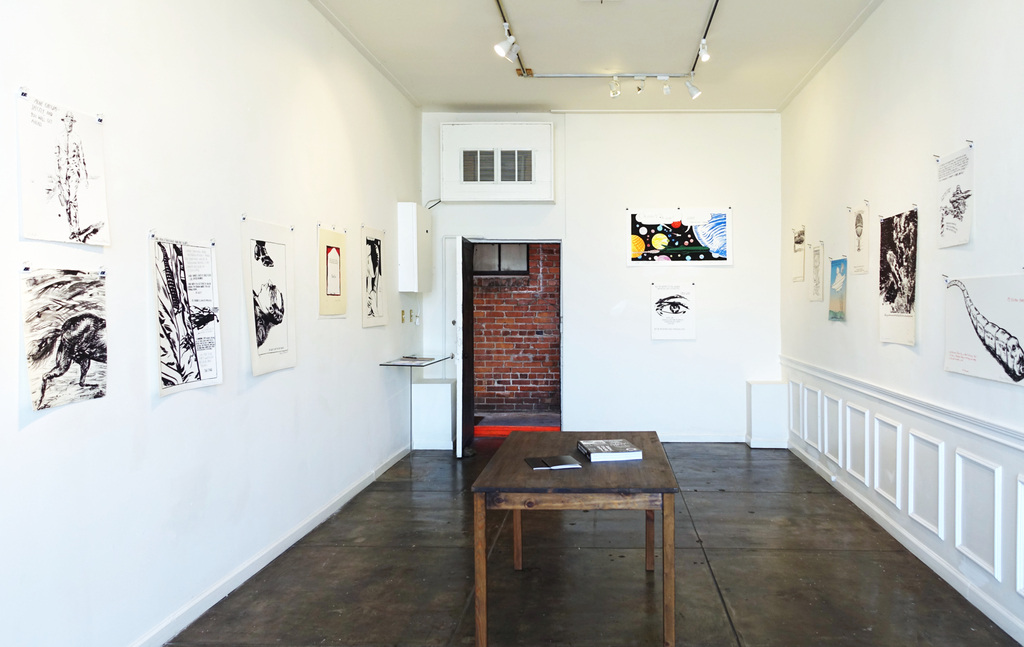 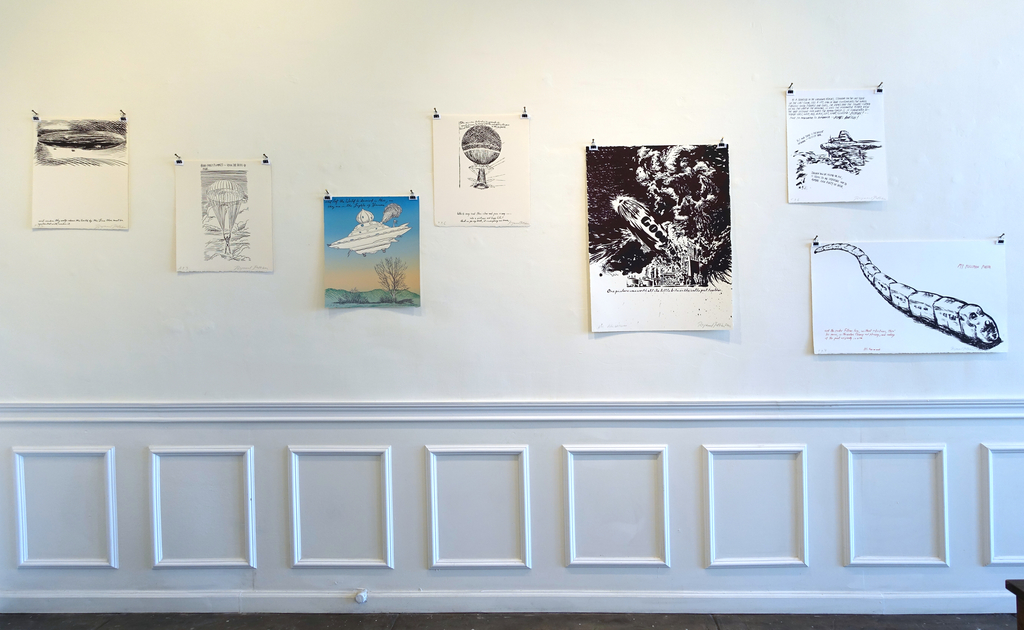 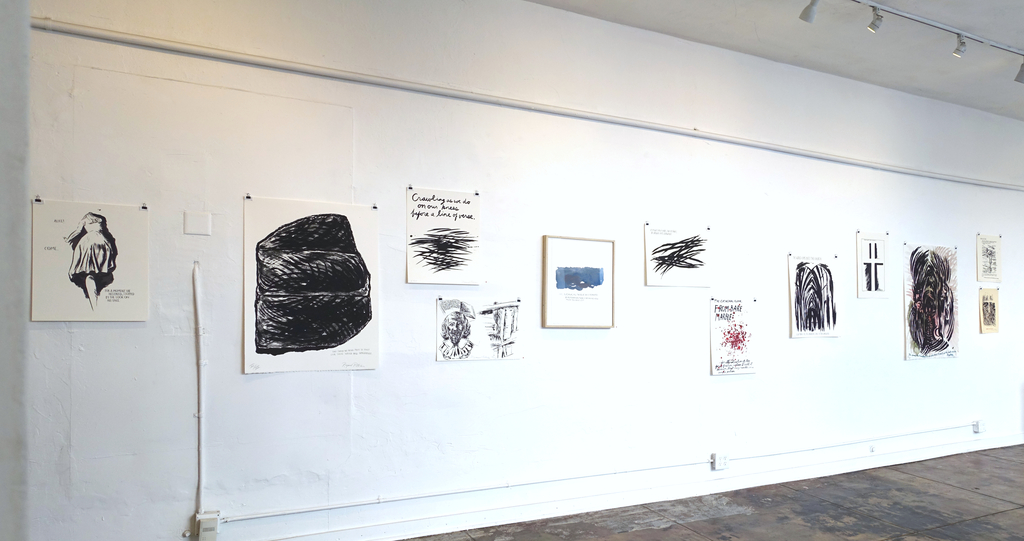 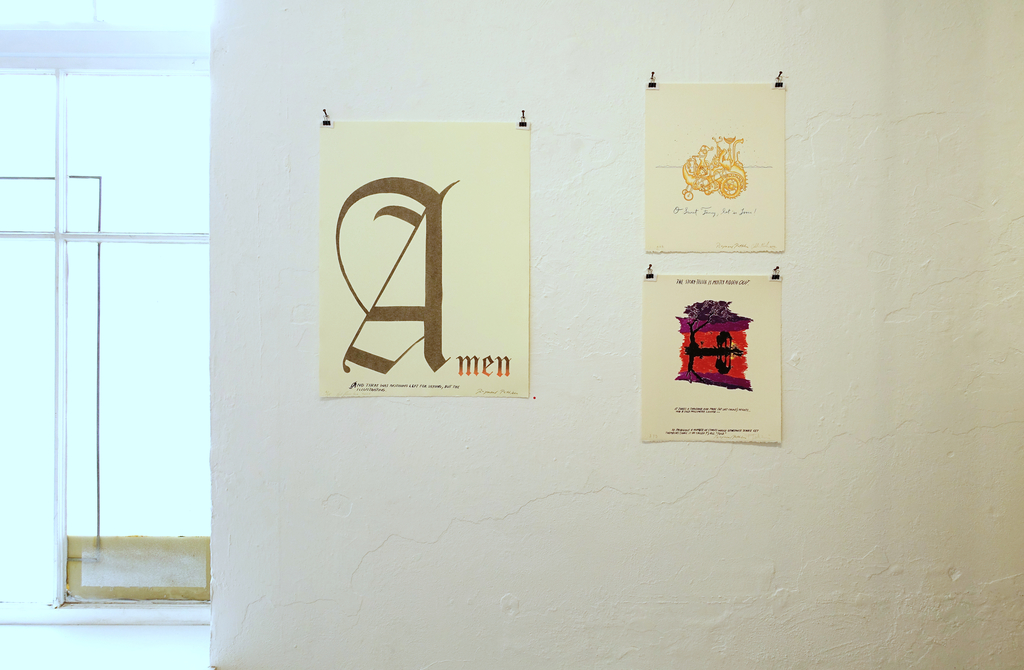 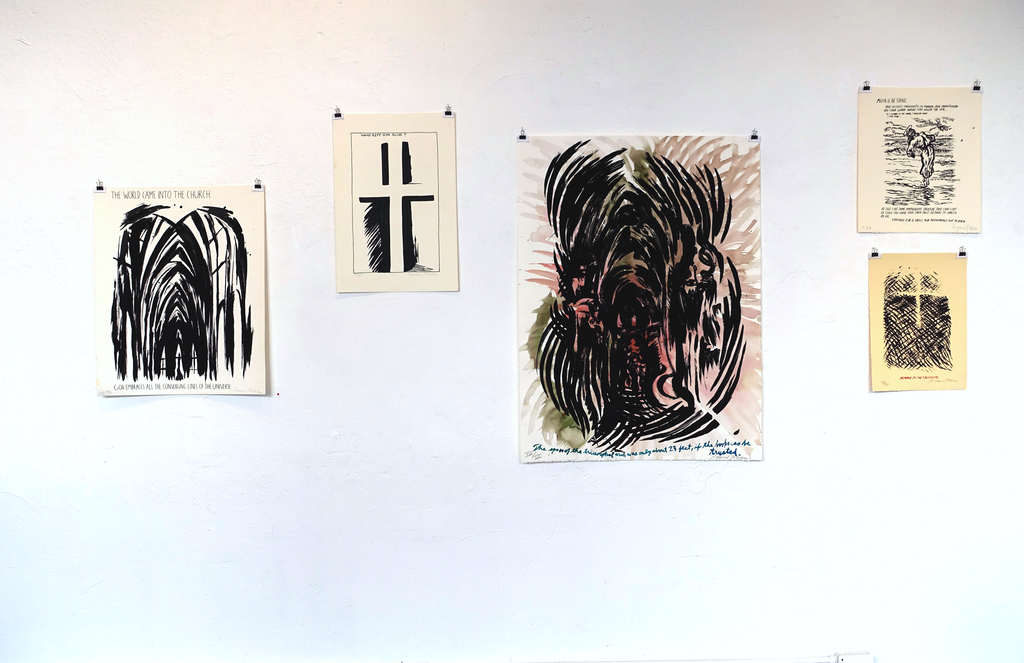 Raymond Pettibon’s art draws from and is inspired by a wide-range of influences: baseball, religion, art history, advertising, film noir, punk rock aesthetics, popular culture, etc. Pairing his drawings with enigmatic quotes, his literary sources may be even more diverse than his imagery and include authors such as Marcel Proust, William Blake, John Ruskin, the Bible, Sappho, and even the artist himself. Taking their point of departure from the Southern California punk-rock scene of the late 1970s and 1980s and the do-it-yourself aesthetic of album covers, comics, concert flyers, and fanzines that characterized the movement, his drawings have come to occupy their own genre of potent and dynamic artistic commentary.
Prints, Raymond. Prints. is an exhibition built around series of prints Pettibon created in Los Angeles from the late 1980s to as late as 2007. Working with master-printmaker Richard Duardo for the earlier prints, these works exhibit a decidedly punk rock aesthetic and simplicity. The later prints done with master printer Ed Hamilton at Hamilton Press show a facility with the collaborative printmaking process that is expressed via more complex and involved works. These include many hand colored works and several with unique hand drawn texts, such as No Title (Spaceships), 1998, No Title (However Vast), 2007, No Title (Winged Hearts), 1998, No Title (Rosetta Stone), 1998, and No Title (Cathedral), 1998.
Most exciting about this exhibition are the number of unique proofs included. Due to the close relationship with Hamilton Press and other LA-based publishers, GROSSART has been able to secure for this exhibition unique and unbound trial proofs of several prints from Pettibon’s bound book Faster, Jim (2003) – notably a two page spread of My Pullman Porter which is absent the crease endemic to the bound versions. Other trial proofs reveal glimpses into his working process as colors and texts are tested to find the right combination for the final edition. Several prints from earlier series even include several rare B.A.T.s, such as 1990’s No Title (Crawling as we do) and No Title (THE CATHEDRAL FLOOR), et al. Also featured are proofs and prints of Pettibon’s noteworthy collaborations with other artists such as Victor Gastelum, Francesca Gabbiani, Ed Ruscha, and Eddie Ruscha. This includes an exceptional color trial proof of Pettibon and Ruscha’s sold out and very rare The End (State I), 2003.

He said to me of his drawings, “Even to look at them can be an ordeal, like reading Milton at a sitting.” Each one demands absorption. After fully contemplating a few, you inevitably numb out. But there’s no help for an art that, as fast and as loose as it appears at first glance, distills long periods of conception and reflection. Pettibon told me that images can await the right words for years, and vice versa.”
(Peter Schjeldahl. The New Yorker. “Man of Many Words.” February 5, 2017)
“Pettibon’s drawings are episodic meditations on the slipperiness of life. They speak with the rare sensibility of a nominal outsider who has reached that place by going so deep inside the culture that he’s disappeared within the mass...Part aimless rant and part open-ended visual poem, Pettibon’s work is suffused with an inescapable poignancy. Pettibon’s art ... forms an obsessive, fragmented, relentless stream of consciousness, which poetically pictures the nature of thought in a glutted Information Age. As the torrent rages on, the artist treads water with his eyes wide open, keeping his head (and ours) just above the overwhelming deluge.” (Christopher Knight. The Los Angeles Times. October 11, 1999.)
About Raymond Pettibon (in a bio, Pettibon describes himself):
Raymond Pettibon is a resident of the Americas and has lived in the Northern and Southern hemispheres most of his life. Born in 1957, however some sources place the date as 1944 or as early as the late thirties, after a varied career that has included work as a lumberjack, ambulance driver (in France during the war), merchant seaman on a tramp steamer, reporter and newspaper editor and bartender, he now devotes his full time to the art of fiction.
Born and raised in Southern California, Pettibon now resides in New York, NY. He has exhibited extensively throughout Europe, Asia, and the United States. He is very well represented in public and private collections throughout the world. Several monographs of his work have been published over the years. Frankly, Mr. Pettibon has done very well with all his tireless hard work, effort, and creativity.
About GROSSART:
Adam Gross founded GROSSART in 2002 to share light and creativity with the broadest audience. Initially established in response to the despair and confusion that seemed the order of the day after September 11, 2001, over time GROSSART evolved into a full-service exhibition, collection management, advisory, development-oriented firm. After a hiatus of several years while serving at MOCA, launching an art fair with for LA with The Armory Show (and supporting The Getty’s first Pacific Standard Time), and then running The Lapis Press, GROSSART is at it again – on the prowl for unique and independent voices that can make a difference... again, to bring some joy into our oh-so-interesting world. Creativity unites!
About The Lodge:
Since opening in early 2015, The Lodge has added a refreshing note to the city’s rapidly growing cultural landscape with an inclusive roster that reflects its owner’s personal interests. For the modern art cognoscenti, the East Hollywood address possesses a particularly storied