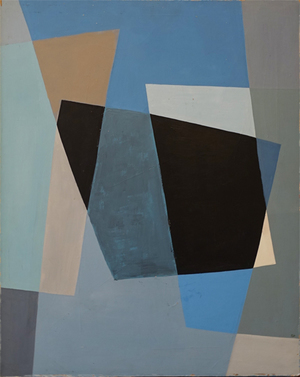 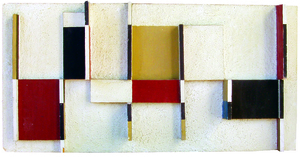 Stanley Dorfman was born in Johannesburg, South Africa. He studied painting and fresco at the École des Beaux-Arts and the Académie Julian in Paris.

After finishing his studies in Paris, he moved to St Ives in Cornwall, England, where he was an assistant to Barbara Hepworth and was also greatly influenced by Ben Nicholson in the 1950s. As a member of the Penwith Society of Arts (also known as the St Ives School), he exhibited with fellow group members such as Nicholson, Hepworth and Peter Lanyon. He also exhibited at the Redfern Gallery in London.

Dorfman then returned to South Africa where he worked extensively with mosaic and sculptural wall constructions in architecture.

Tumultuous political conditions in South Africa necessitated his return to England where he joined the BBC and would spend the next 16 years there first as an Art Director and then as a Producer and Director for iconic television programs such as Top of the Pops and In Concert. He has worked with some of the most popular rock, classical and jazz artists and performers including the Rolling Stones, the Beatles, David Bowie, Frank Sinatra, Jimi Hendrix, Joni Mitchell, James Taylor, Bruce Springsteen, Duke Ellington, Count Basie, Dizzy Gillespie, Harry Nilsson, Dudley Moore, Peter Cook, Rudolph Nureyev and Victor Borge. With his background in the arts, Dorfman was a great innovator in combining music and the moving image together, bringing his unique sense for aesthetics and developing distinct motifs. He created music videos and filmed live performances for David Bowie, Harry Nilsson, John Denver and many more that are still considered avant-garde today.

After moving to the US in 1974, he continued working as a producer and director on projects such as Woodstock 2 and 3 and the Amnesty International Concert in Paris.

Dorfman began painting again in 1996, and has continued to focus on his painting since, exhibiting in several shows at Pharmaka in downtown Los Angeles.