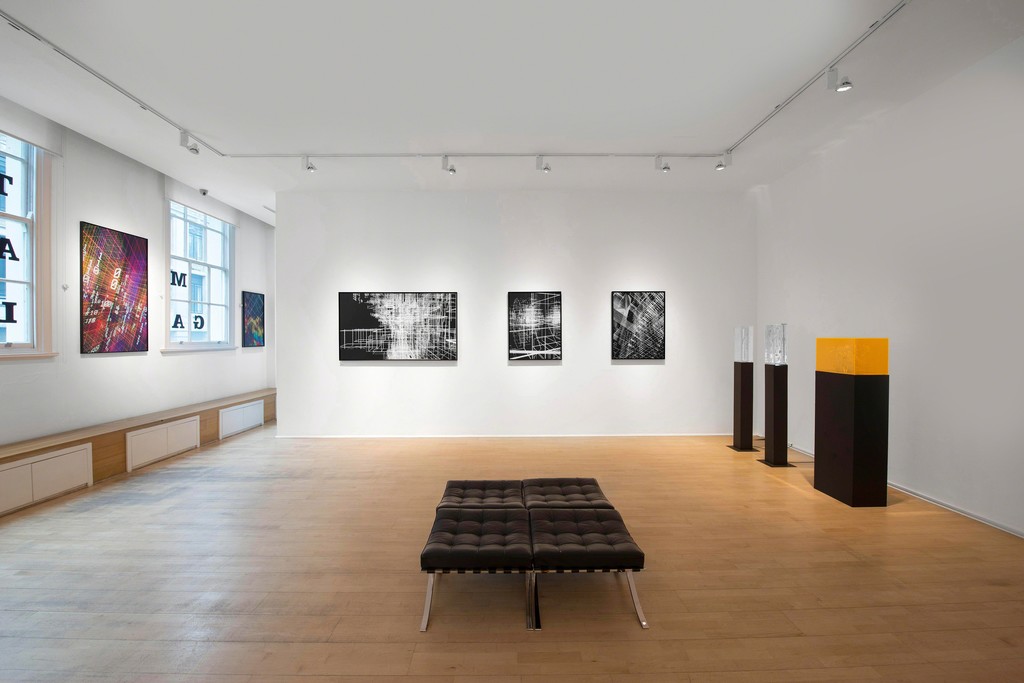 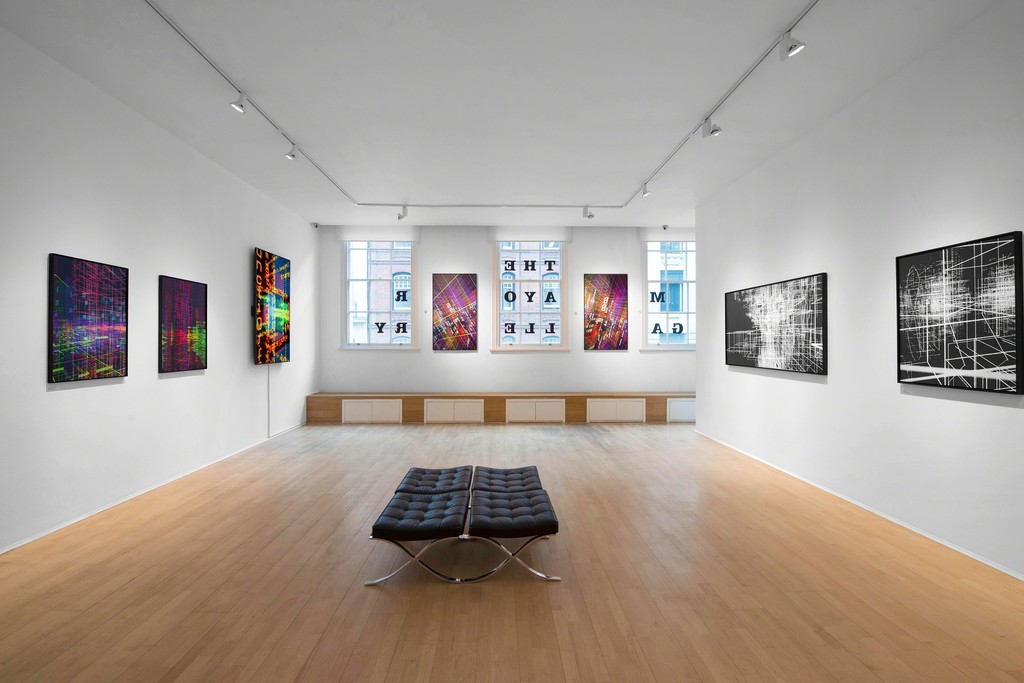 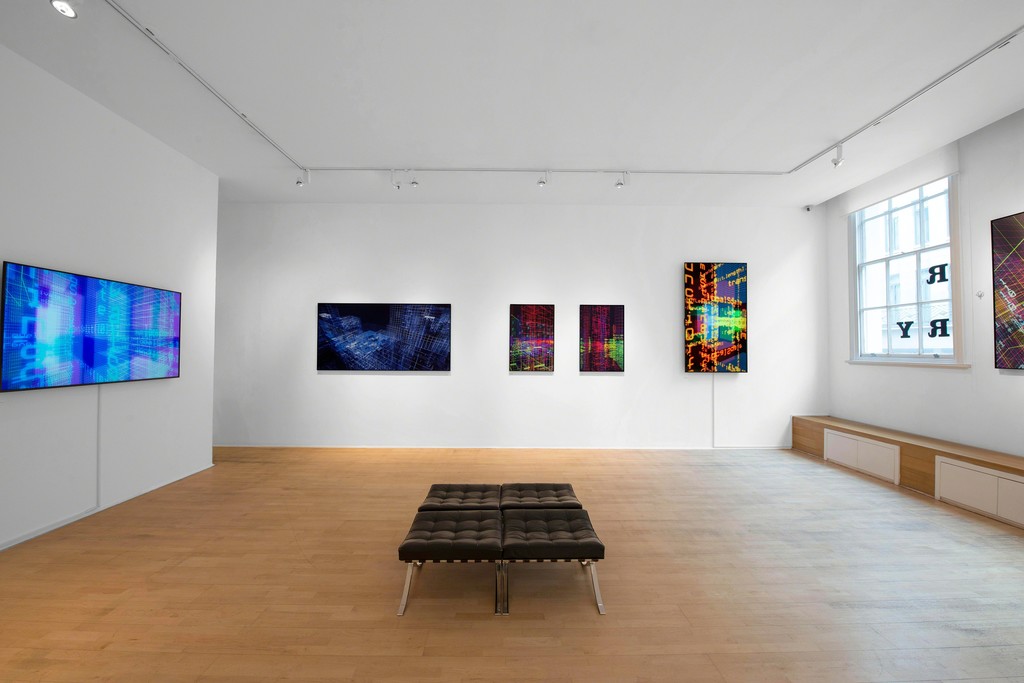 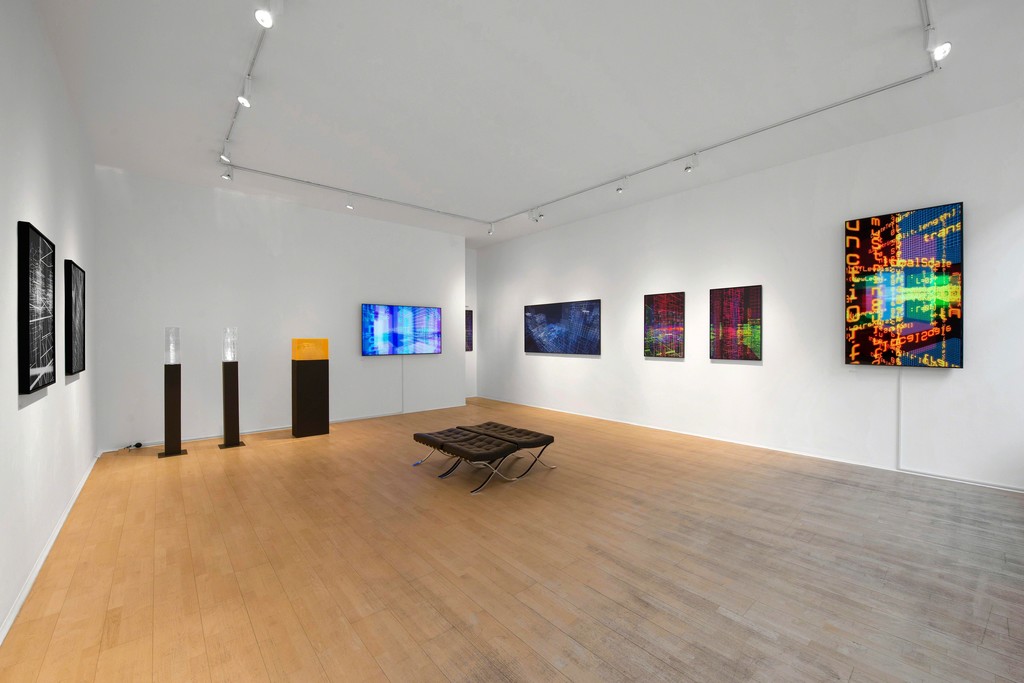 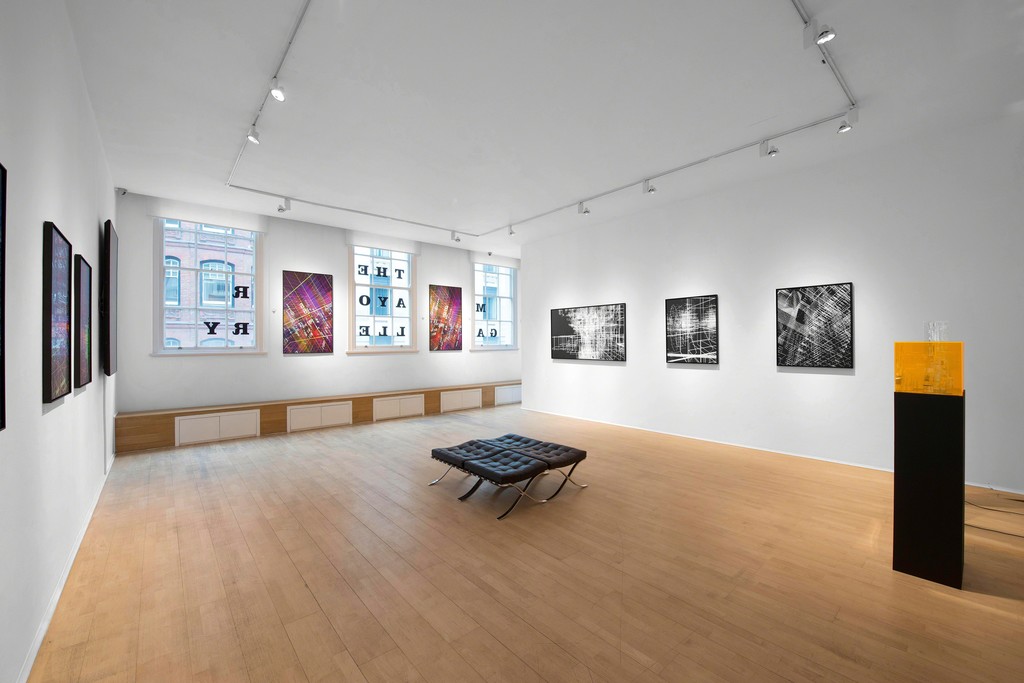 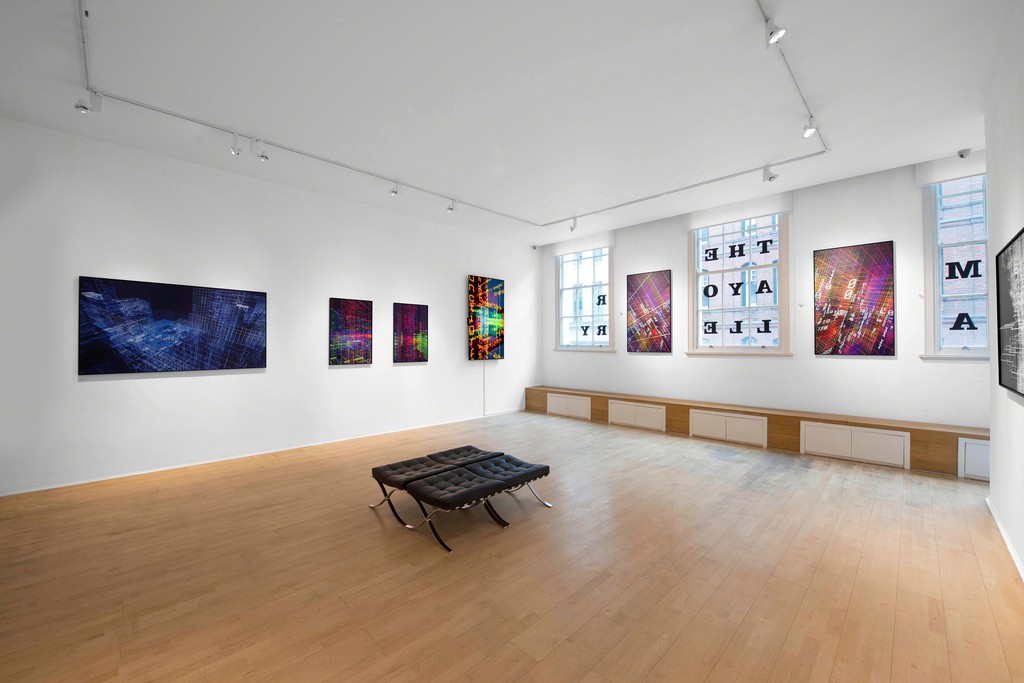 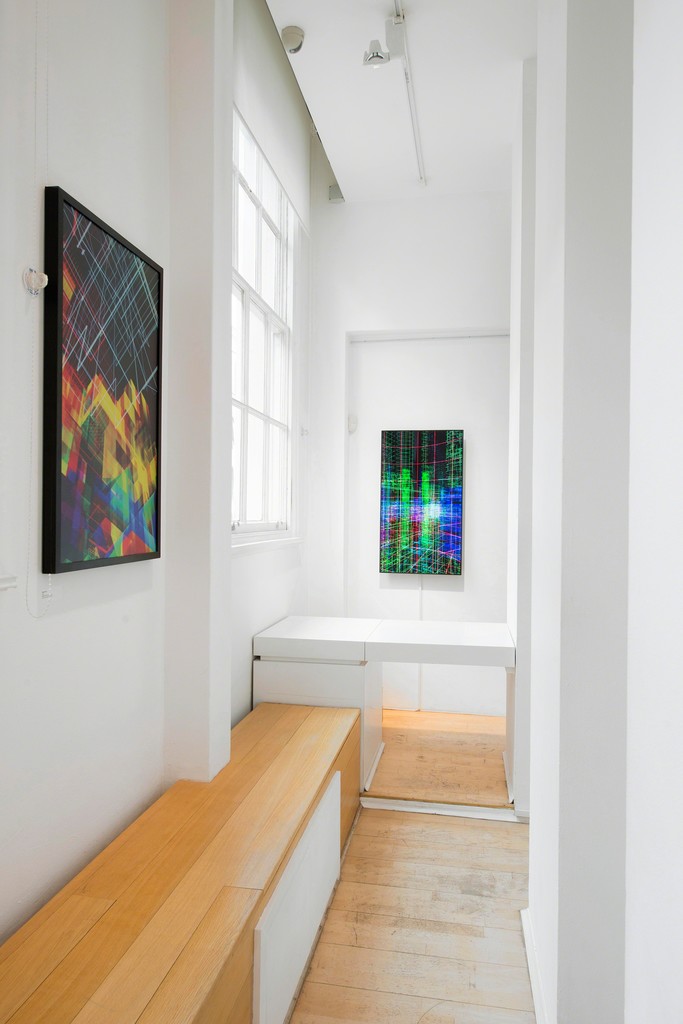 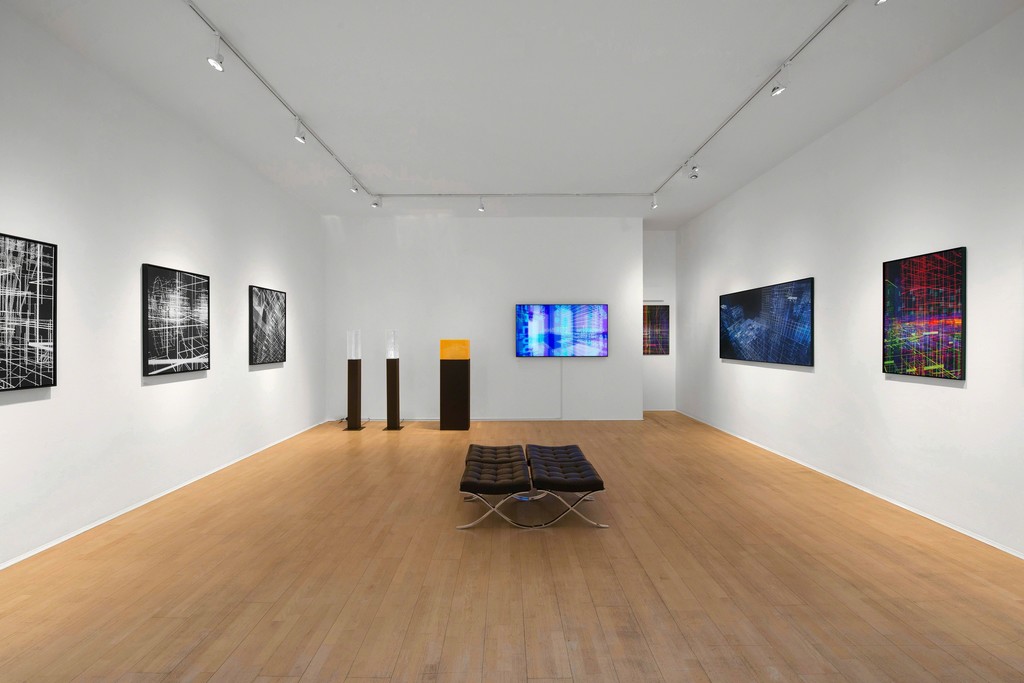 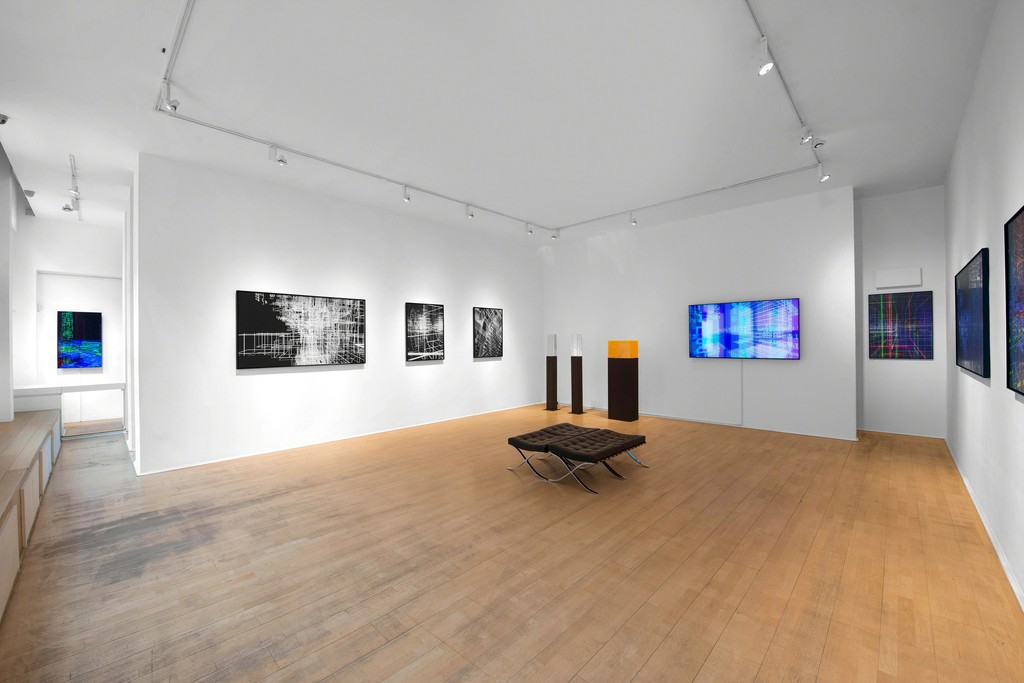 UBIQUITY 1 & 2 are the first solo exhibitions of French artist Miguel Chevalier in England. A pioneer of virtual art, Miguel Chevalier (b. 1959, Mexico) has been using computer science as a means of expression in the field of visual arts since 1978. His work addresses the question of immateriality in art, as well as the logic induced by the computer, such as hybridisation, generativity and interactivity.

Miguel Chevalier has produced mesmerising exhibitions and installations for museums, art centres, galleries and public spaces around the world. His spectacular The Origin of the World - Bubble, suspended above Oxford Circus, has recently been the centre of attractions during the Lumiere London. Following this event, the artist will install Digital Abysses in the submarine base in Bordeaux (March-May); and Artistes & Robots at Galeries nationales du Grand-Palais in Paris (group show, April-July).

In the two London exhibitions, a series of works in motion on screen, printing and sculptures will be presented, exploring the imagination of the city and its urban transformations. The works presented are the fruit of a reflection to renew the look on the city and architecture, to reinvent the city of tomorrow and imagine our future world. Sensitive to the evolution of the development of cities and their globalisation, this work is a continuation of previous works by the artist: Aller-Retour-Tokyo / Kyoto, 1996, Villa Kujoyama, Japan; Periphery, 1998, Espace Cardin, Paris; Memory and Changes, 1999, La Fabrique, Beirut, Lebanon; Metapolis, 2002, Marco, Monterrey, Mexico; Méta-Territoires, 2015, Fernand Léger Gallery, Ivry-sur-Seine, France.

At The Mayor Gallery, Miguel Chevalier will show new digital works "Méta-cities" 2018 presented on 2 LCD screens. In the 19th century, Cerda, Haussmann and Otto Wagner developed urban models capable of restructuring the city and reorganising its circulation, but today, traffic flows, exchanges in real time, and requires rethinking the city in its report to life and territory. Chevalier wonders how to appropriate and transcribe the city faced with a multiplication of networks. Computer tools allow the artist to explore these "new digital cities" in their future-world. Through his fixed or moving works, he creates cities between reality and simulation, forming part of a transformable space-time. Planetary cities, without location, without beginning or end, without centre and periphery, the "Meta-cities" are made up of wired buildings that parade before our eyes. These cities generate themselves from software specially designed with the computer scientist Claude Micheli. These "Méta-cités" are revealing of a generic urban principle that reproduces itself without a state of mind, without reference points, without worrying about singularity.

To respond to these two works on screen, a series of fixed works are presented in the form of digital printing in colour and black and white from the worlds of these "meta-cities". The series "Méta-Cités - White and Black" and "Pixel-Cités" are a tribute to the origins of the digital work: the pixel. Elementary point of any digital image, the pixel is a recurring motif in the work of the artist and his research. It is for him the equivalent of the pictorial touch. If Richard Hamilton or Roy Lichtenstein or Alain Jacquet were interested in the enlargement of the point and the offset frame, Miguel Chevalier develops a writing no longer based on the plot of points like these artists, but on the pixel frame. The pixel, enlarged, set in motion or fixed, becomes autonomous and composes abstract and very graphic universes imbued with poetry.

Finally, two sculptures "Archi-Sculptures 1 & 2” complete the exhibition. One of these sculptures is made from laser cutting techniques and the other represents a city made up of a labyrinth of hybrid architectures in 3D printing. 3D printing in sintering powder, now allows materialisation of the virtual, it is a real revolution for the field of sculpture that will also disrupt our environment.

At Wilmotte Gallery visitors will discover a large installation of projected interactive virtual reality: "Méta-Cities" 2017 where the spectator sinks into the meandering streets of an infinite virtual city. It can explore 3 different urban universes and interact in discovery via a touch interface. These "meta-cities" generate themselves in a dynamic chaos of unplanned flows.

Through his fixed or moving artworks, Miguel Chevalier creates cities between reality and simulation, forming part of a transformable space-time. He reveals with the virtual the elusive and translates the new forms of contemporary life and cities today: incessant renewal, speed, transformation. Abandoning all chronological and linear memory, he constructs in images, a "constellation of time and space" urban, between destruction and construction, growth and mutation.

Light, movement, energy: new poetics of matter are elaborated in the continuity of kinetic works. Miguel Chevalier transcribes from this aesthetics, notions of flow and networks. He makes visible the invisible, reveals the essence of things in an ever-changing world.

On this occasion, a new monograph in French and English retracing the work of Miguel Chevalier from 2002 to 2018 will be published by Bernard Chauveau and co-edited by The Mayor Gallery.