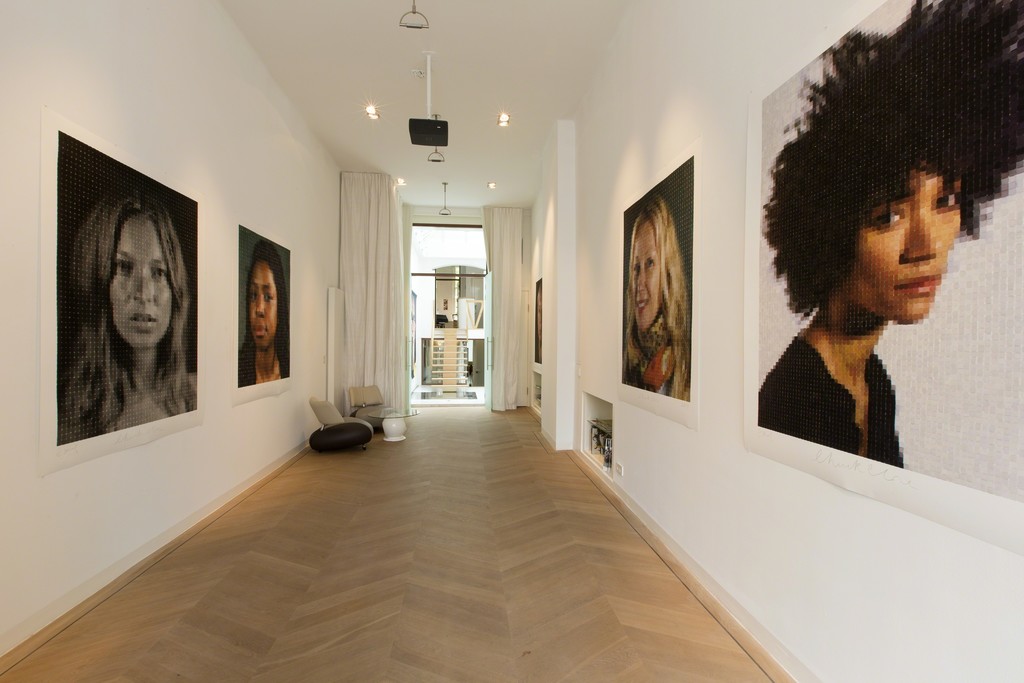 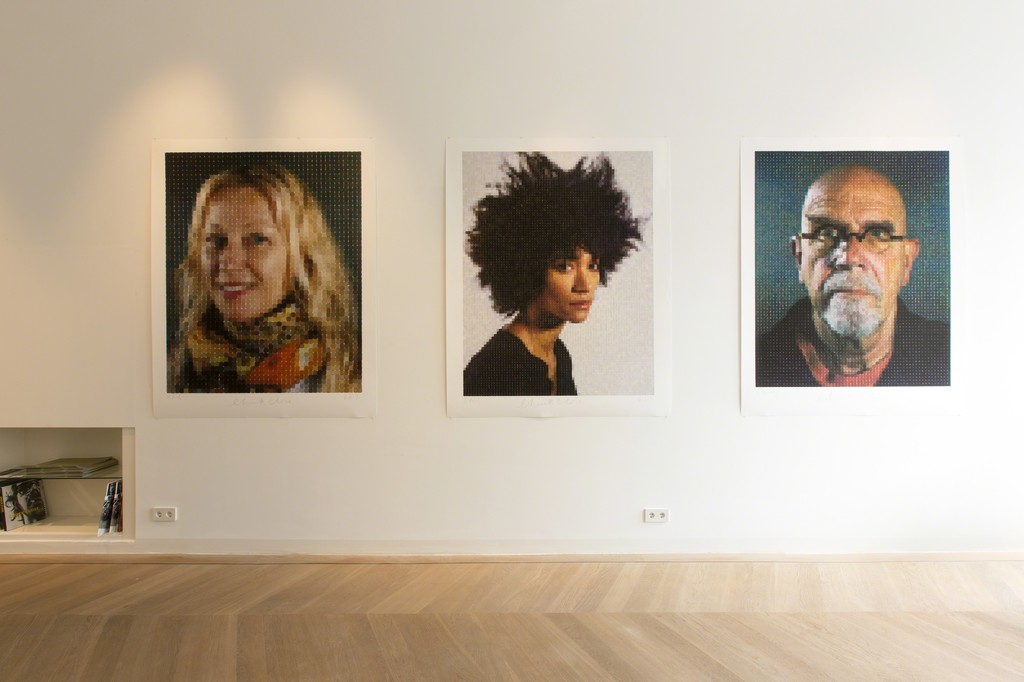 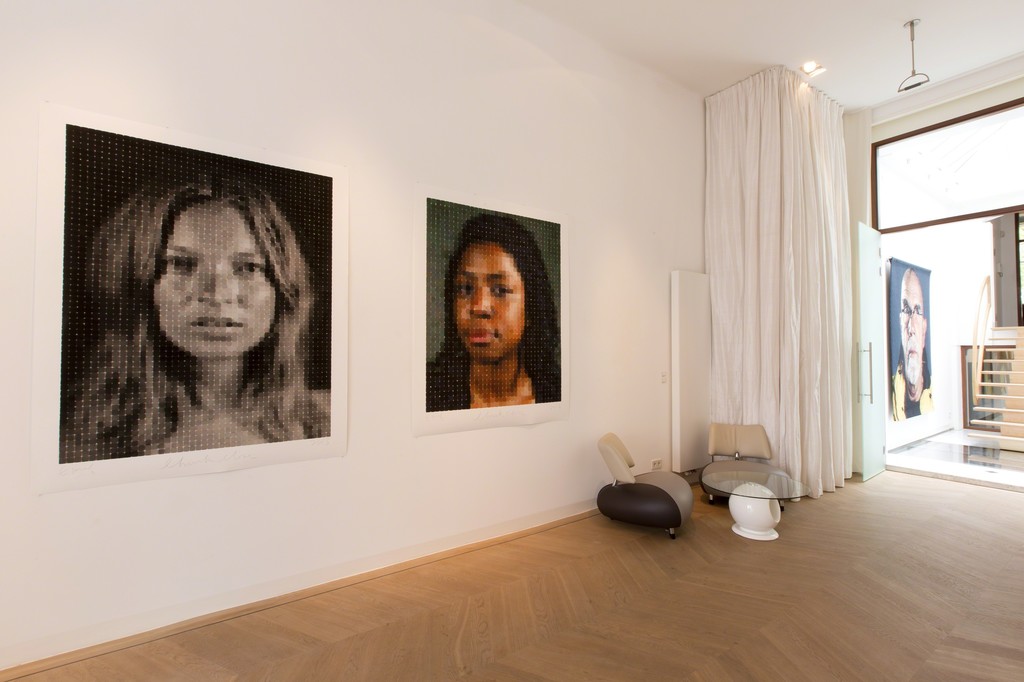 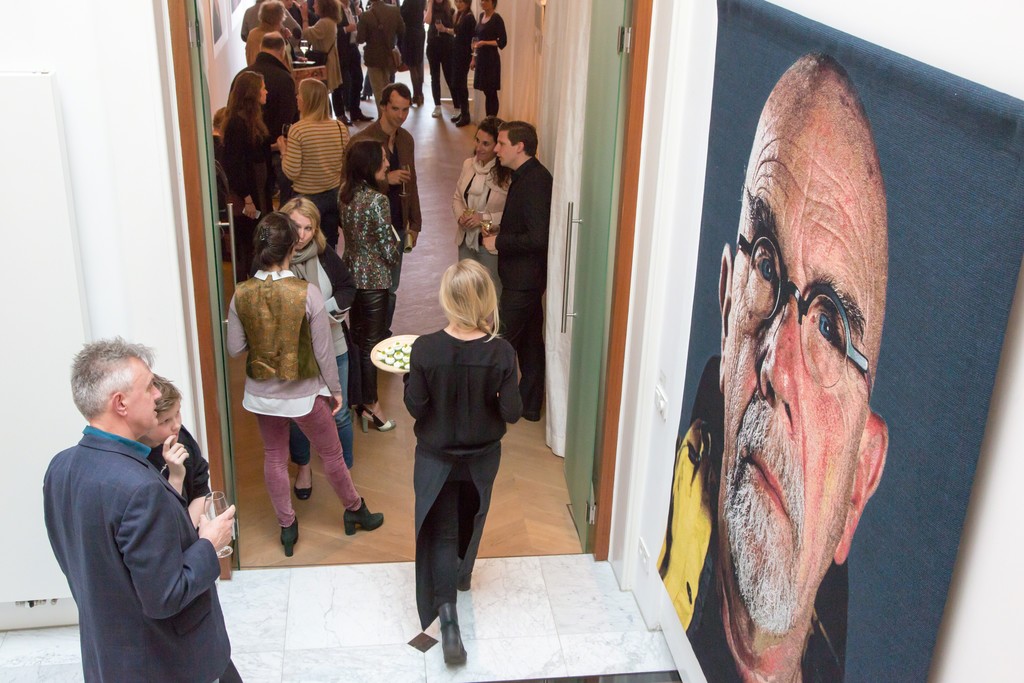 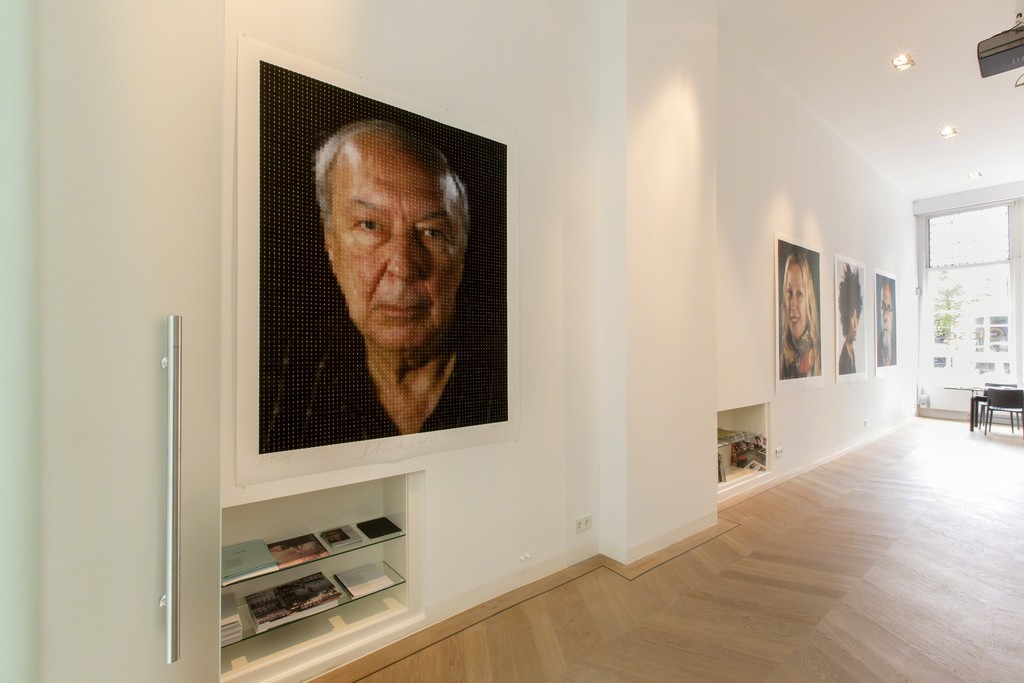 The Merchant House is proud to present Chuck Close—one of the most
acclaimed contemporary American artists—reaching his lyrical apogee in
digital media.Writing for The Merchant House catalogue, the
Dutch media theorist Arjen Mulder calls Close a renaissance artist for his innovative techniques and devotion to experimentation.
Close’s digitally produced Archival Watercolor Prints are the focus of The Merchant House exhibition. They are printed using custom-developed software based on a scan of more than 14,000 of his handmade watercolor marks. To highlight the connection—
and a contemporary leap—of Close’s work vis-à-vis the Dutch tradition of portraiture, the
exhibition also includes a tapestry (arguably, the first digitized medium in history and of Northern European origin) and a smaller painted self-portrait on loan. All print works are produced by means of a photograph scaled up and reproduced as a painting, and then reproduced as a print constructed to achieve the desired color effect.
The Merchant House exhibition is guided by a hope for intimacy with Close’s monumental art, reined in by the Amsterdam canal-house space. Amsterdam’s Baroque facades, with their predetermined but varied structure, are a great backdrop to explore
the theme of a human face, especially magnified to this scale. In connection with the Pace Gallery 2012 exhibition in New York, including digital prints, the leading American art critic, Robert Storr, wrote about Close: “I thank him for the bedazzling trail that leads me from one mesmerizing picture to the next.”
Chuck Close (b. 1940, Monroe, WA) is best known for his large-scale, photo-based portrait paintings, which he started making with his first iconic black-and-white Self-Portrait of 1968. In 1988, Close was paralyzed following a rare spinal artery collapse; he continues to paint using a brush-holding device strapped to his wrist and forearm. His practice extends beyond painting to encompass printmaking, photography, and, most recently, tapestries based on Polaroids.
Close has been represented in New York by Pace Gallery since 1977. He was awarded a major retrospective at the MOMA, New York in 1998; many major exhibitions and public collections followed. Close is a member of the American Academy of
Arts and Letters, has served on the board of many arts organizations, recieved the high US honor, the National Medal of Arts, in 2000, and was recently appointed by President Obama to serve on The President’s Committee for the Arts and
the Humanities.
Publication:
Exhibition catalogue with an essay by Arjen Mulder, professor of media theory and semiotics at the
KASK School of Arts in Ghent, Belgium, and author of several acclaimed books, living in Amsterdam.
His most recent book is Wat is leven? (What is
Life?), Uitgeverij Arbeiderspers, Utrecht, 2014
and a response by Marsha Plotnitsky, Founding Director of The Merchant House.