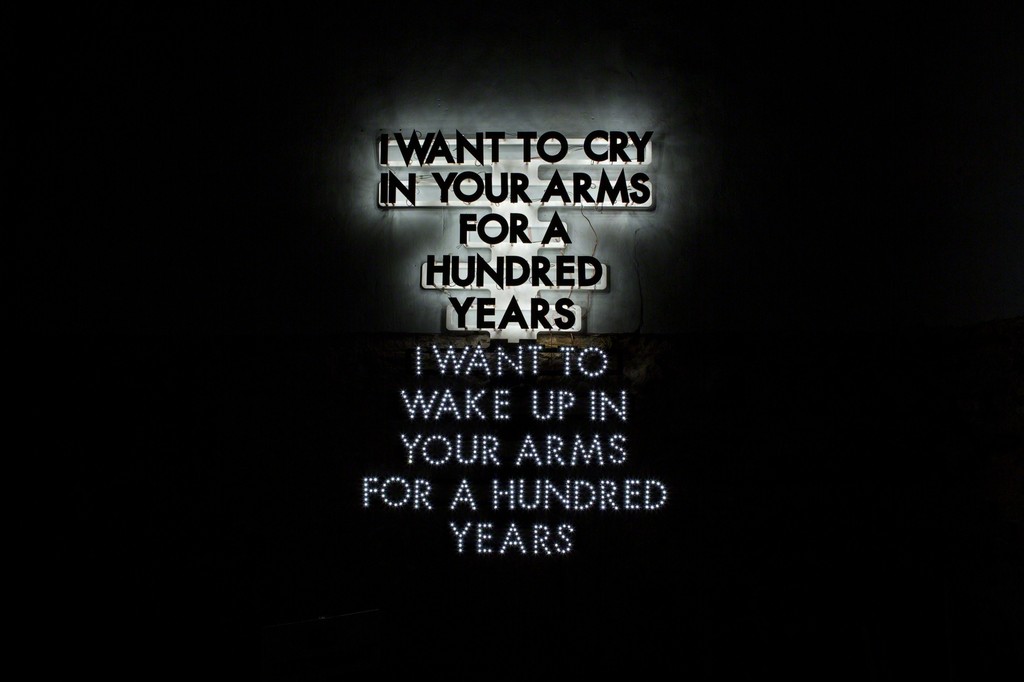 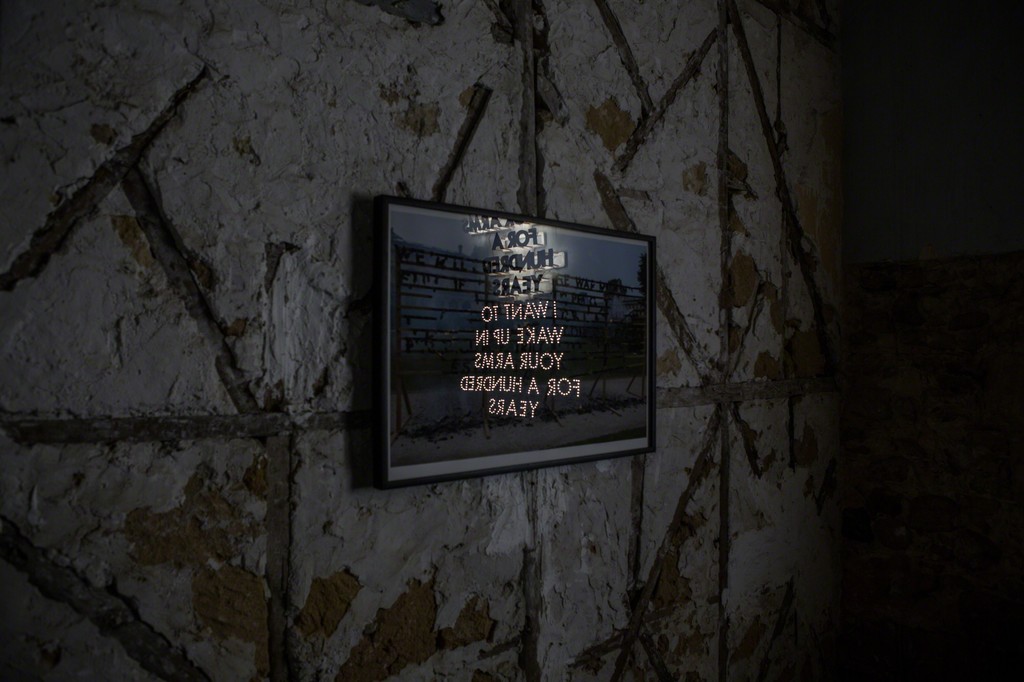 The space was lit by light coming from "A Hundred Years". Photography: Antonis Minas 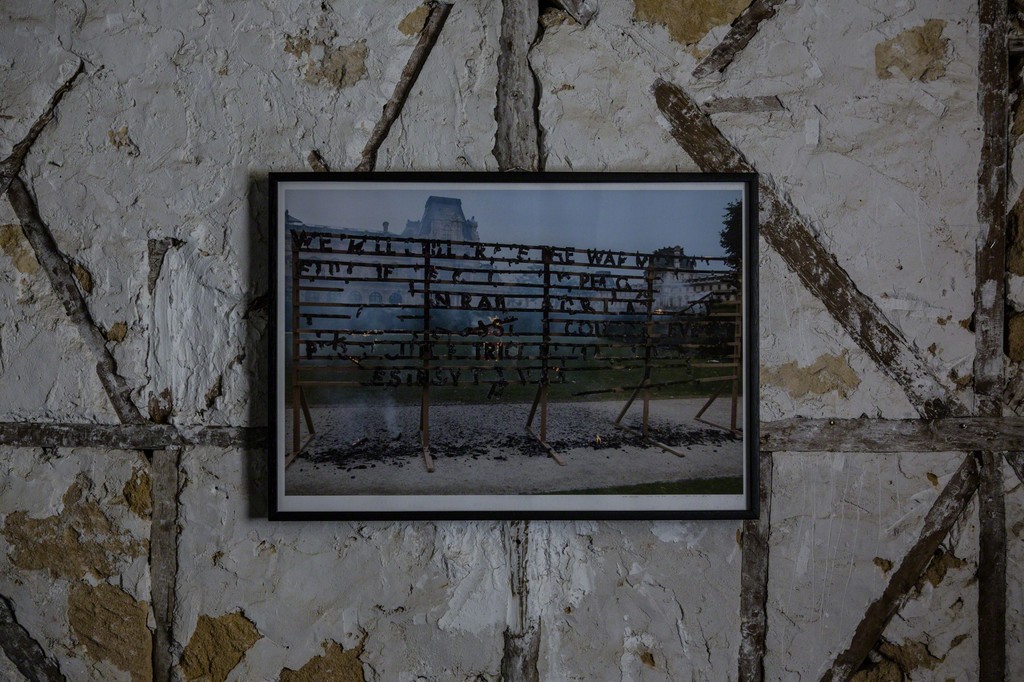 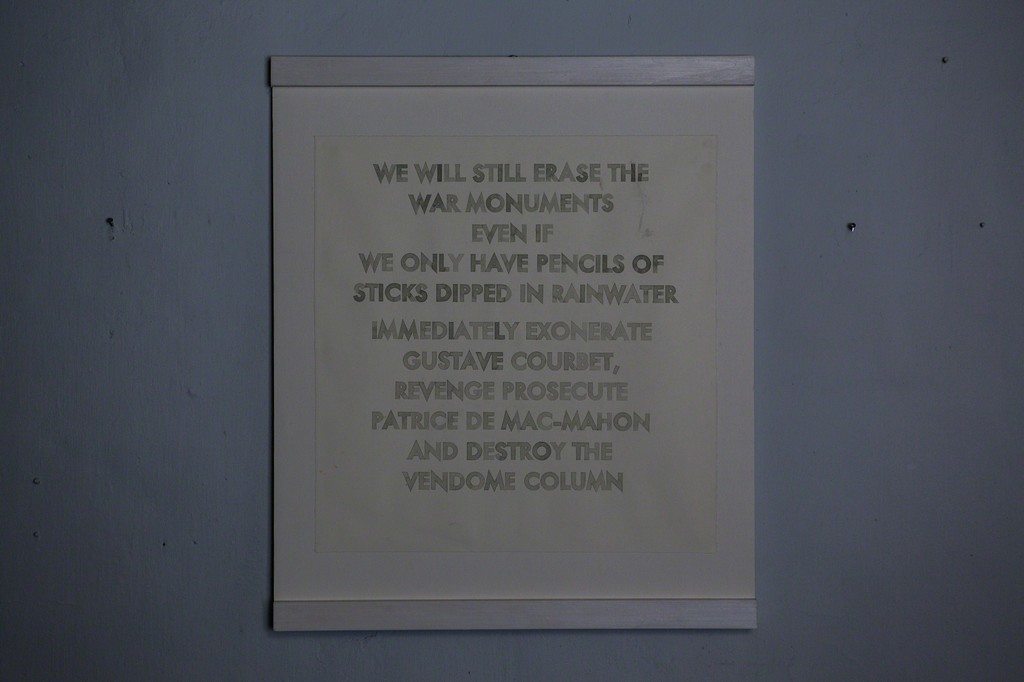 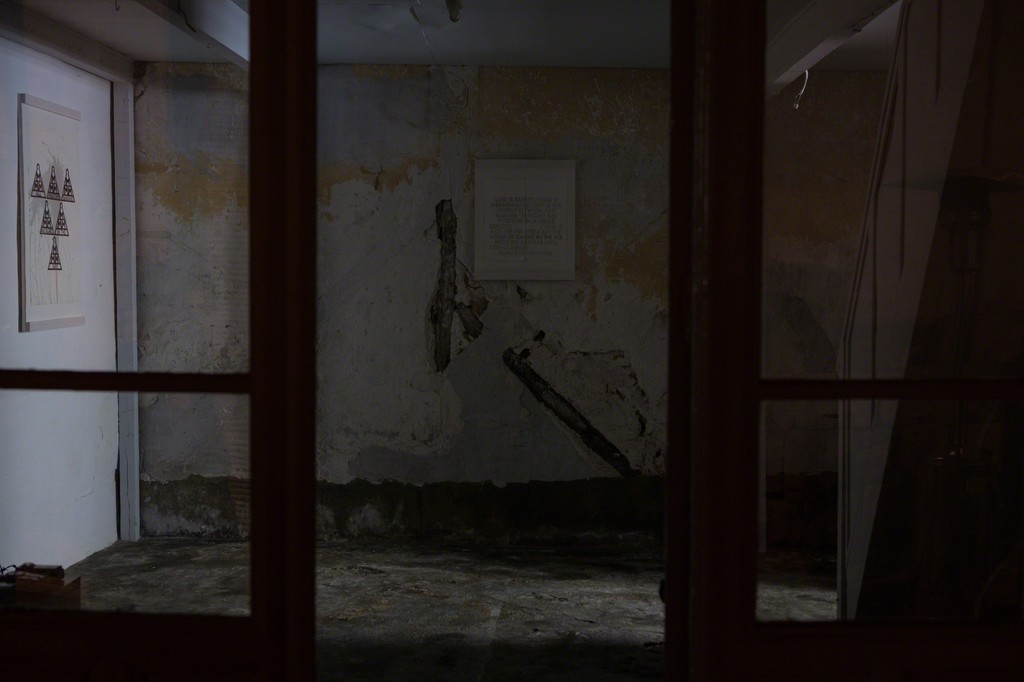 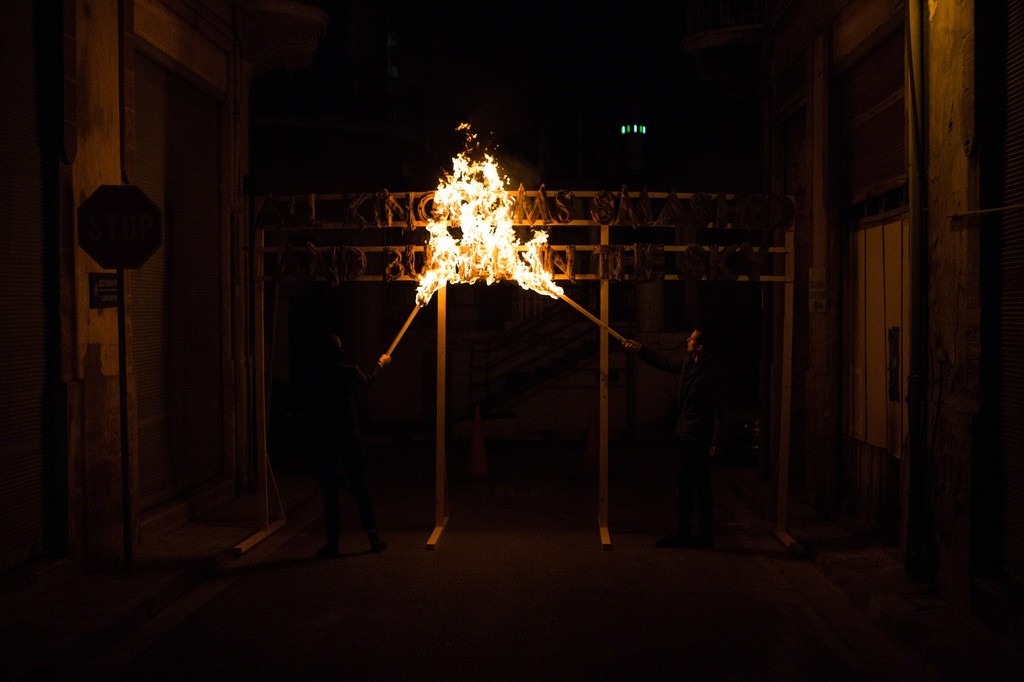 The fire poem was set alight with the Nicosia buffer zone as a backdrop. Photography: Antonis Minas 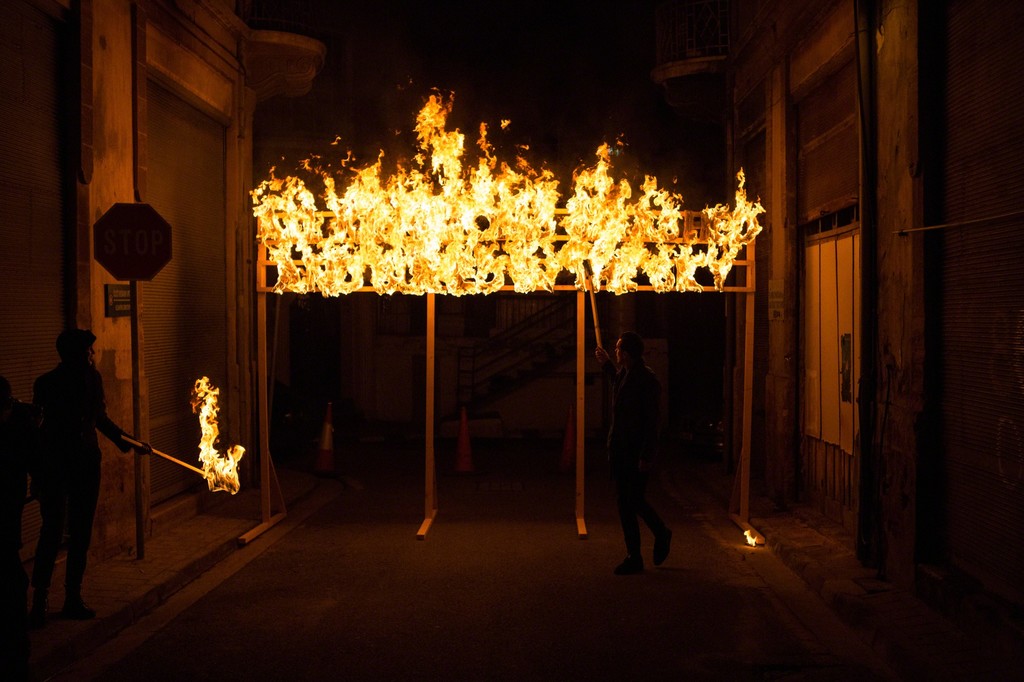 "All Kingdoms Smashed and Buried in the Sky" ablaze in a narrow street next to the buffer zone in Nicosia, Cyprus. Photography: Antonis Minas 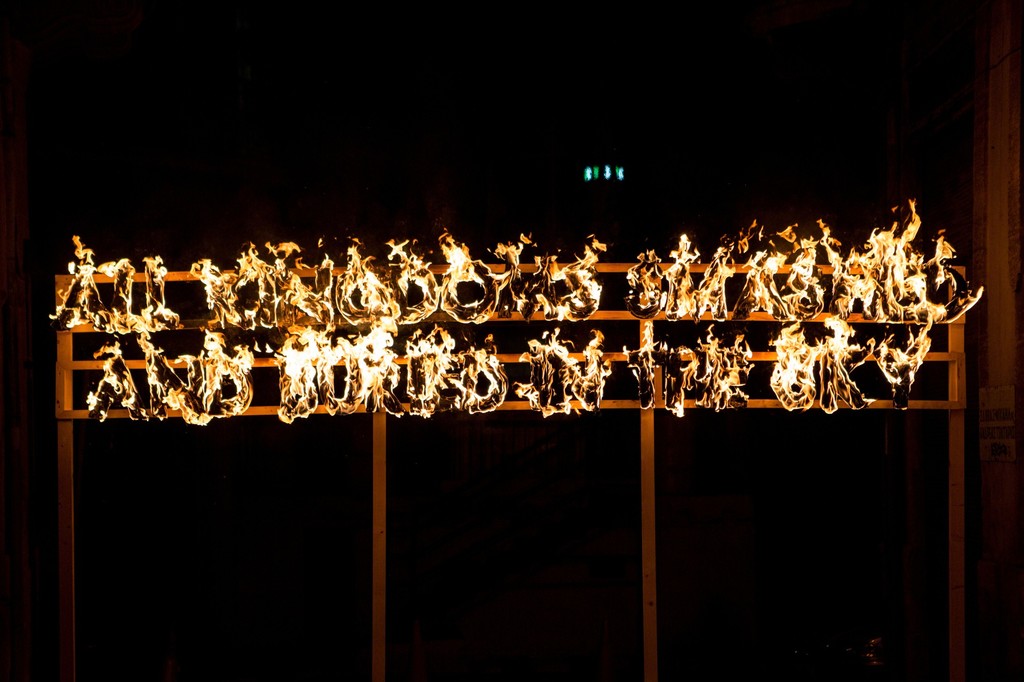 "All Kingdoms Smashed and Buried in the Sky". Photography: Antonis Minas 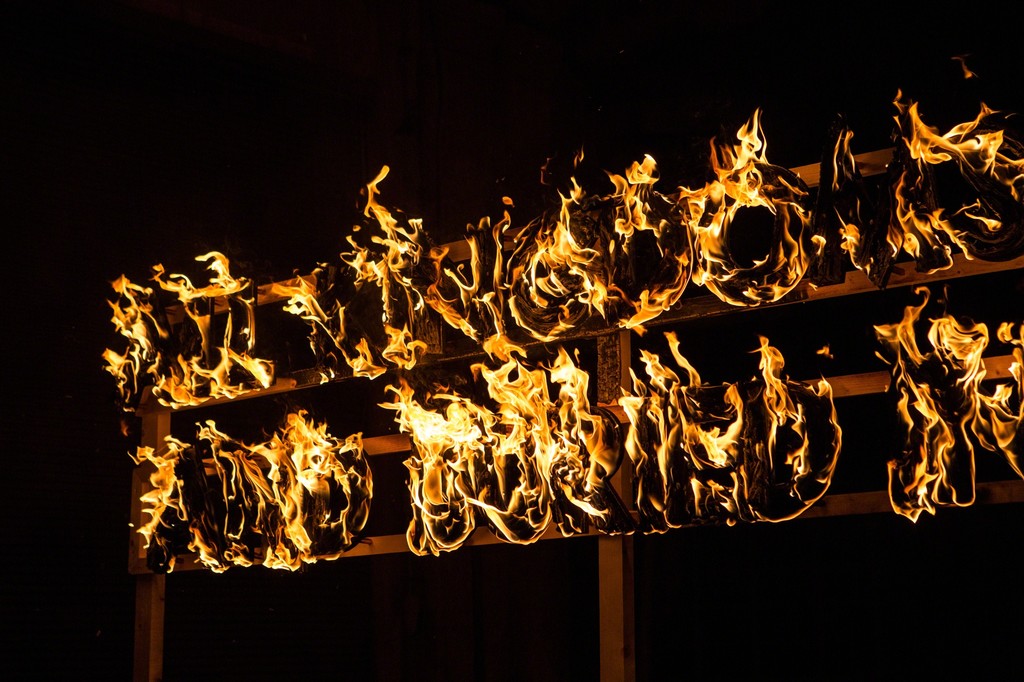 The Office gallery presents the work by the Scottish artist and poet Robert Montgomery entitled: ALL KINGDOMS SMASHED AND BURIED IN THE SKY. It concerns six of Montgomery’ s latest works, while two of the works have been created site especially for the Office exhibition, considering the fact that Kleanthi Christophides street, where the Office is located, shares borders with the buffer zone and eventually gets interrupted by it.

Montgomery’s work begins with poetic text, which he writes himself and then makes sculptural, using forms that normally apply to other species and forms of speech but not necessarily to poetry. - So a text may be presented under the form of an advertising poster, a billboard, at times illuminated at night or burned against the dusk sky. - By adopting and remoulding the conventions of presenting utilitarian and commercial forms of speech, he makes the text more vivid and accessible, offering it a new dimension. Taking poetry out in the streets for a conversation with the public. The artwork ALL KINGDOMS SMASHED AND BURIED IN THE SKY, which also bears the exhibition's title, is not only presented out in the street, but also supports its two ends on the existing buildings, making contact with the present architecture. Its content consists a kind of retrospective commentary on the future, in a direct dialogue with the location and the socio-political state of todays’ Cyprus. The Island is par excellence a place from which many conquerors have passed and quite a few kingdoms have dissolved through time. Further, the work acts as a self-criticism for the British identity of the artists himself, considering that Cyprus was once a colony of the United Kingdom.

The rest of the artworks are presented in the three interior spaces of the gallery and here the text maintains a more internal nature, like a series of watercolours in smaller dimensions. However, spontaneity and sincerity do not cease to operate through them, as a severe judgment against the contemporary political and social system but also as a quieter, more poetic form of resistance. Resistance as recuperation of beauty. Montgomery has described his watercolors thus:

"Even though they are drawings of text I see them as traditional landscape paintings, like all those paintings of sunsets over the sea or sunsets over ruined buildings that we, in Britain, have always been obsessed with. That's why I choose watercolor for the medium. It’ s the medium of the 19th century British Royal Academy, and the medium of Sunday painters like Winston Churchill and Prince Charles, it’ s the medium of Turner. Watercolor is a medium I love, and the sunset is my favourite time of the day, but I look back at the British Empire with guilt and sadness. I think my parent's generation thought the British Empire was two men in linen suits and pith helmets drinking gin and teaching the locals cricket, and my generation knows the British Empire was a military system of oppression and violence. It is impossible to show in Cyprus without feeling a shadow of guilt for the crimes the British Empire committed. Also, in the current "for or against Europe" debate that in this moment characterizes British politics I am firmly pro-European. I look forward to a future beyond countries, beyond Empire and beyond oppression, therefore I keep my belief in the European project alive and I believe that Europe can work. I believe in free movement for all Europeans across all Europe and the sharing of our cultures, education and our kindness and the evolution of Europe into a strong force for peace in the world. I firmly believe in the free immigration of all Europeans into Britain because I know from the experience of my own life that immigration makes Britain a more beautiful place to live. But I still paint in watercolor because I love Turner, I want to recuperate and liberate watercolor painting as a medium from its association with a nationalistic and Imperial vision of 'Britishness'. Watercolor painting for a free and multicultural Europe."

Robert Montgomery’ s works are simple and direct while complex and unpredictable. Whether they take place in public or private spaces, they do not lose their lyricism and their subversive character while being part of a modern proposal about how the city’s landscape can be poetic, but also about how poetry itself can be a part of urban everyday life.