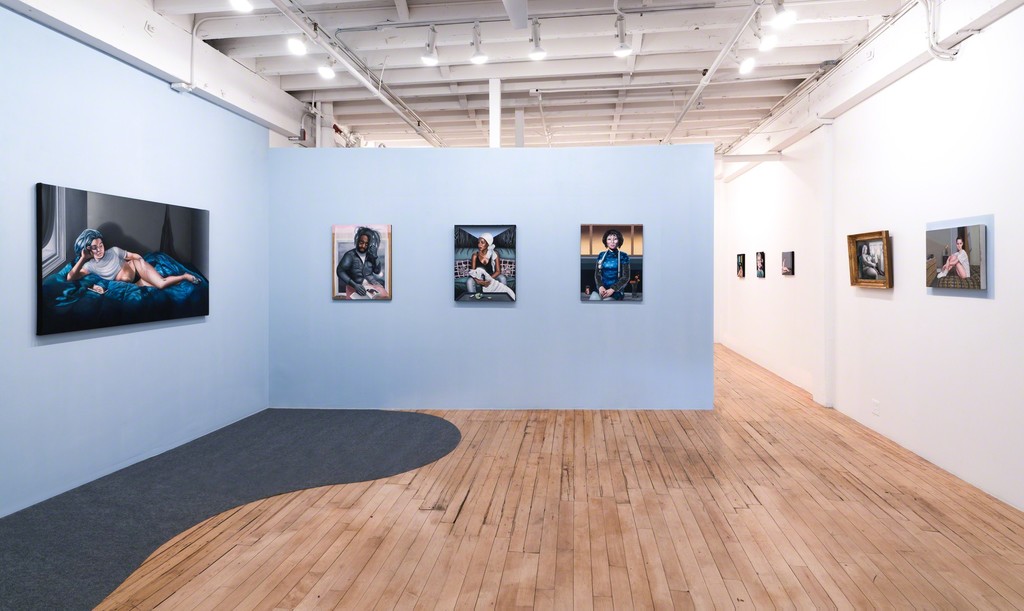 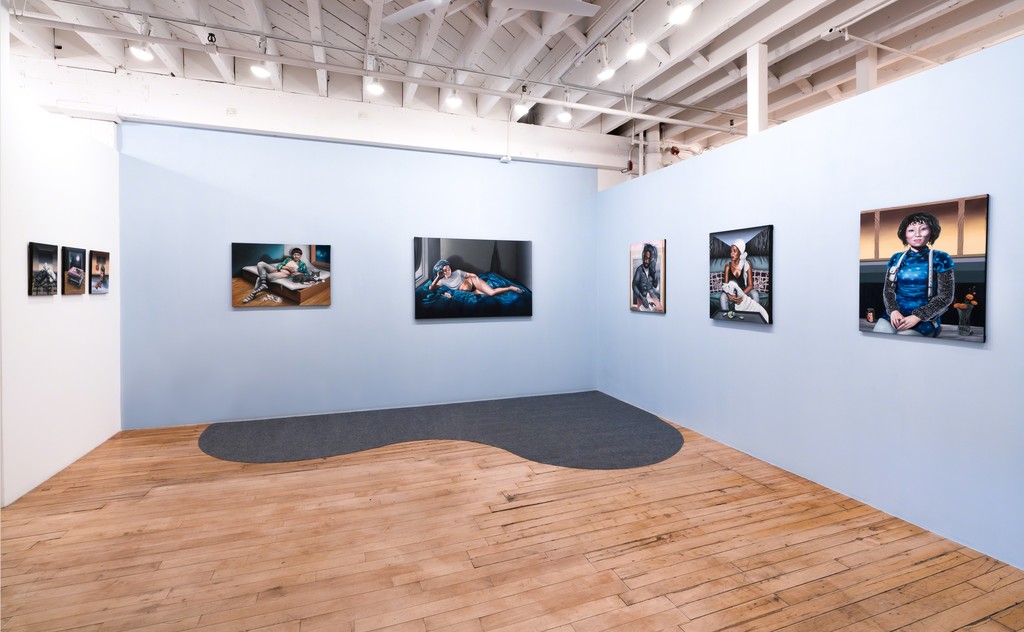 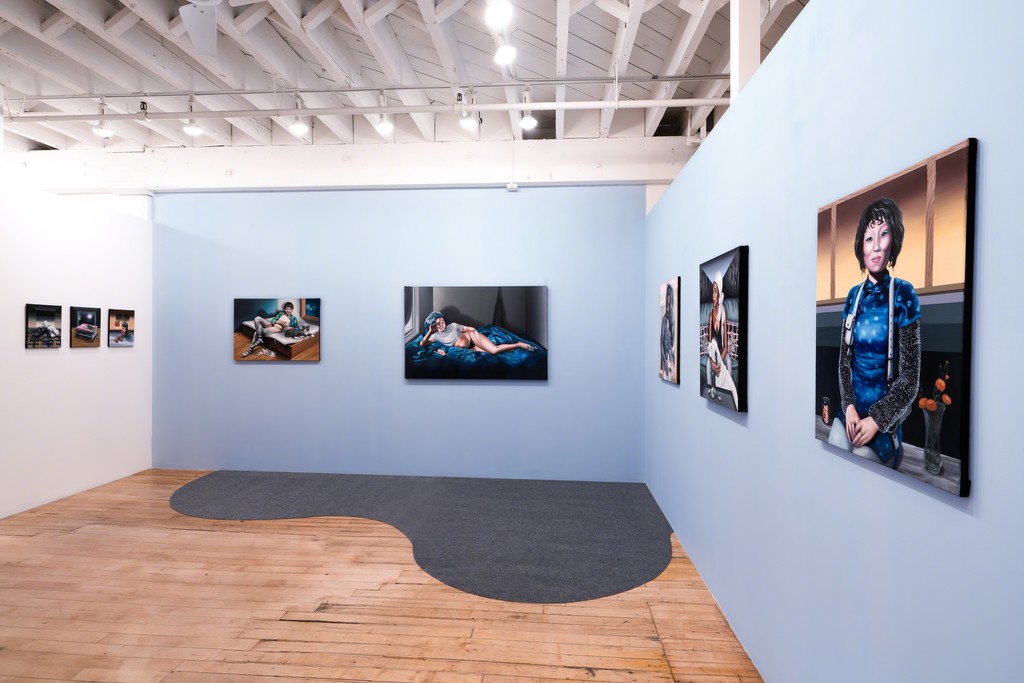 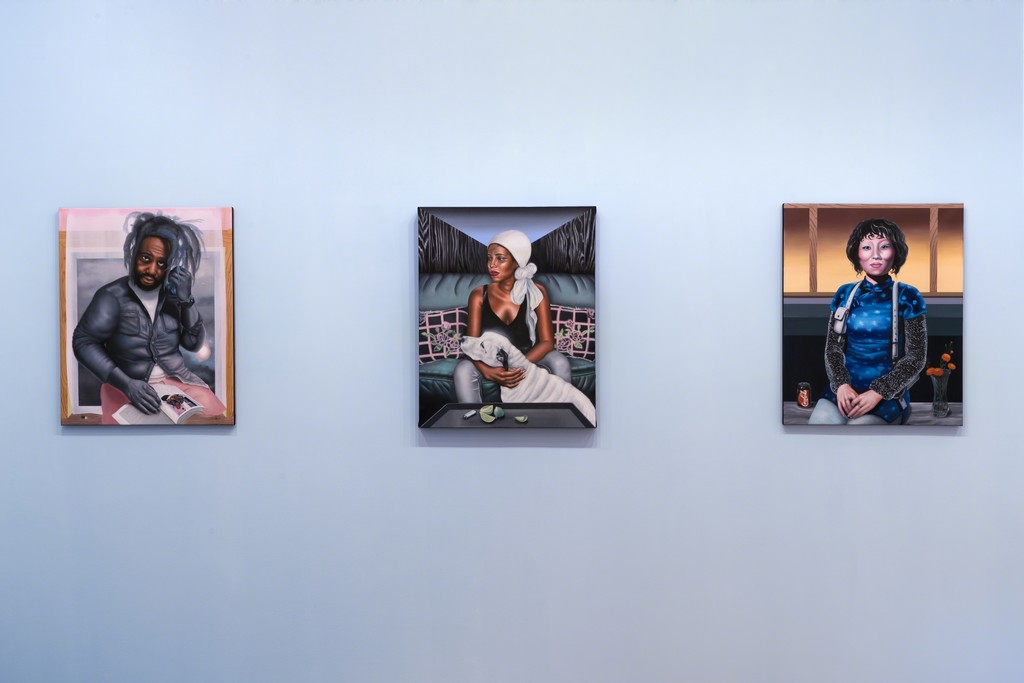 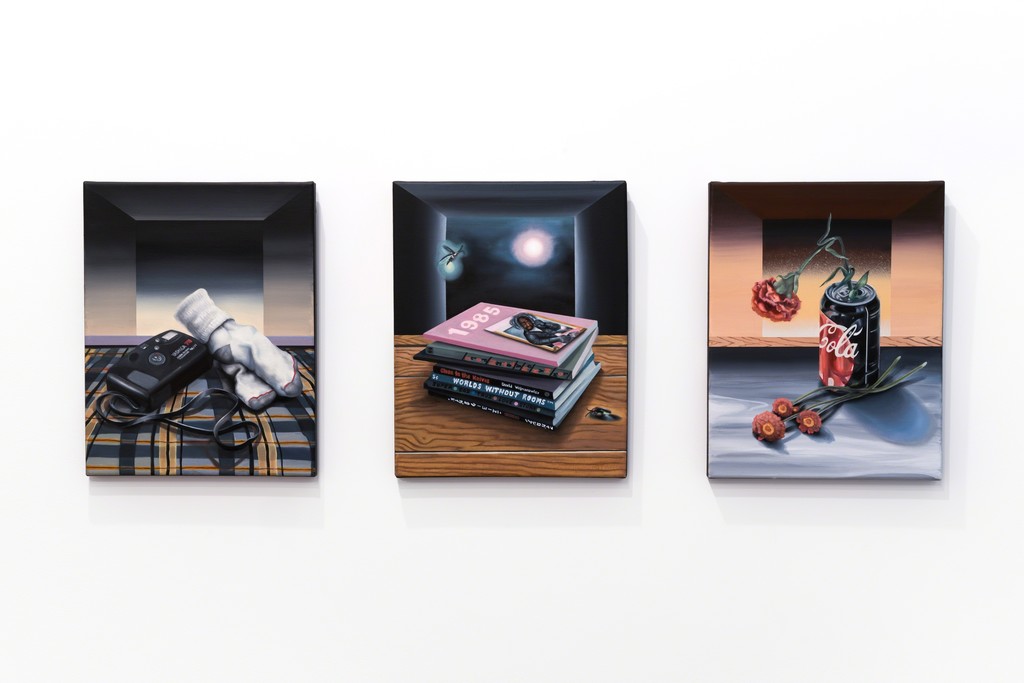 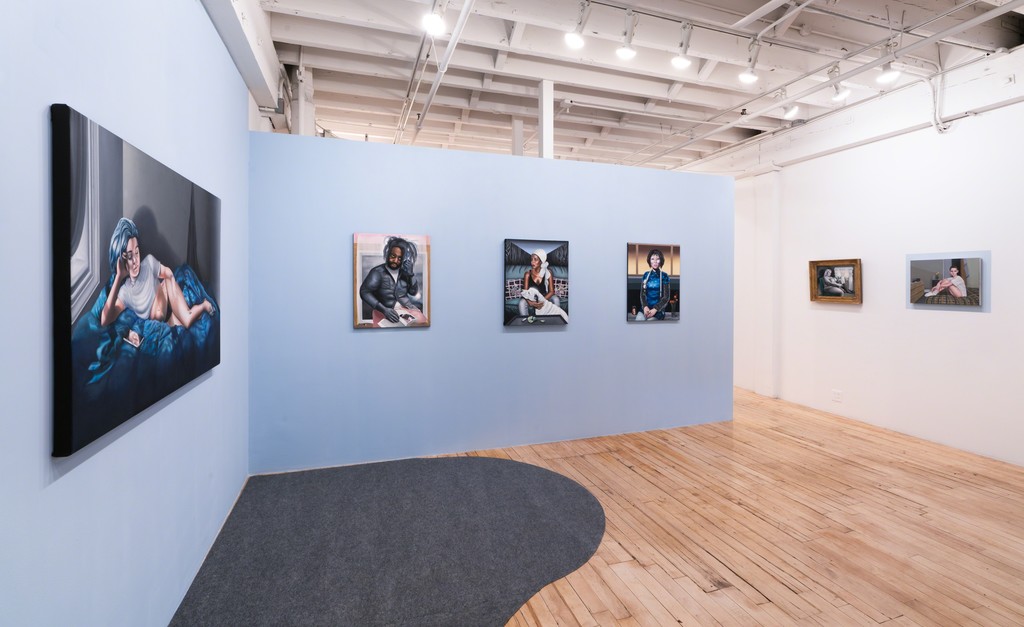 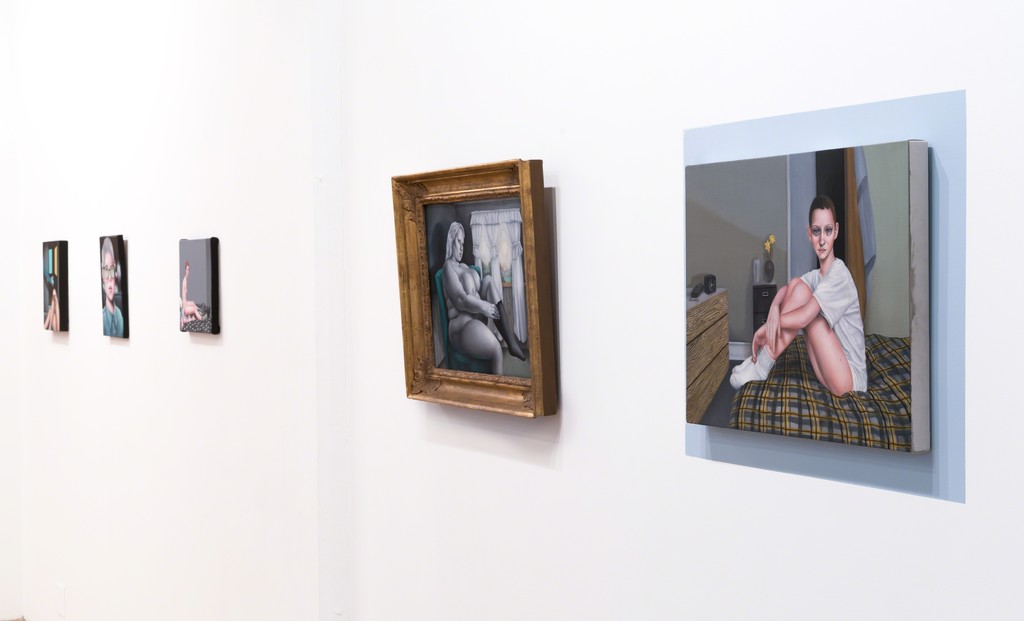 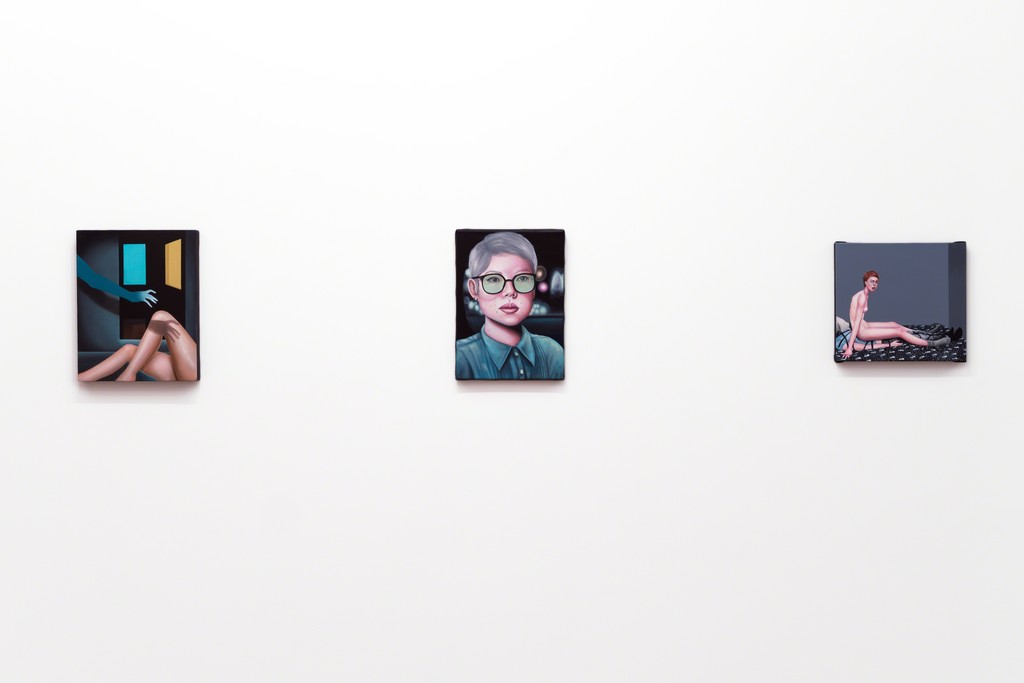 The Painting Center is pleased to present Worlds without Rooms, the first solo exhibition for Alannah Farrell. The exhibition will include over a dozen paintings of the artist's close-knit community of friends in their interior spaces. Each painting highlights personal struggles and victories for the sitters. Some are undoubtedly connected to the careers that are a source of income for them and therefore their security in these spaces. Many are working in creative fields, and some are always working odd jobs to make ends meet. Although their worlds are personal to them, Farrell introduces us to them intimately, either in imagined or actual spaces.

Sanctuary (Magdalena) (2019) is a painting of Farrell's friend, an East Village native. Since a very young age, she has been financially independent as rising rents pushed her immigrant family out of her childhood home. She is reclining on the bed in her actual room, which she affords on her own in a small apartment with roommates. Light peers through the window, extending a shadow over her reclining figure. She looks down, away from the viewer, but is vulnerable in her state of undress. She is wearing a crop-top tee shirt and panties, and a pair of vintage sandals. Her dyed blue hair is accented by cobalt blue bedding. A sign of her personal economic victory is the iPhone placed on her bed, reflecting her likeness. She is in a state between sleep and wakefulness. To Farrell, this invokes the terror of sleep paralysis that haunts her sitter just like it does the artist. It is a sign of stress in a world where income is perceived as proportional to security and abundance.

Backpage/Black Stocking (2018) is a painting of Farrell's friend in an imagined motel room. The sitter is a visual artist and professional dominatrix, and here she is, on an out call. The buxom blonde appears both empowered and reflective between her nudity and visage. She alludes to her power by gazing past the viewer as she pulls up her black stockings. Again, a shadow extends over the sitter, invoked by the light entering in from the window. This treatment of light is an example of Farrell's technical prowess, something she borrows from Old Master painters and dilutes. Farrell tempts the viewer by portraying the room in color and the sitter in grisaille with the faintest hints of reflective color, further accented by the deep turquoise chair she is sitting in. Just like in the paintings in many motel rooms, this one is framed in a gaudy gold frame. The frame is found and has an archaic six-digit phone number on the verso, alluding to back-page ads for sex workers highlighting their phone numbers.

Mulberry Street Sunset (Yuui) (2019) depicts the artist's close friend Yuui sitting in front of her window in her modest Mulberry Street apartment. The apartment is located in New York City's esteemed Little Italy neighborhood. The location of the apartment alone could be considered a personal victory for Yuui, a makeup artist who moved to New York City from Japan after high school. She has worked her way up to live in this coveted neighborhood. Her white leather harness is a luxury item gifted to her by fashion designers that she worked for. Seated proudly, compassionately gazing at the viewer, Yuui is wearing a traditional Chinese dress, she is half Japanese and half Chinese, over a long-sleeved western shirt. This alludes to the marriage of Eastern heritage and her Western home. She crosses her hands, the ultimate tools with which she makes her art, in her lap. Upon closer inspection, she wears two rings; heirlooms from her grandmother.

Alannah Farrell lives and works in New York City's East Village. She earned her BFA at The Cooper Union and has been a member of the Painting Center since 2017. This is her first solo exhibition at the Painting Center. Previously, Farrell was included in notable group exhibitions such as "Mutual Aid" (2018) at Kent State University’s new William J. and Pearl F. Lemmon Visiting Artist Gallery and "American Architecture in Drawing" (2016) at the King's College Chapel in London. She has been included in articles in ArtForum, Juxtapoz, and Italian Vogue as well as other notable publications.