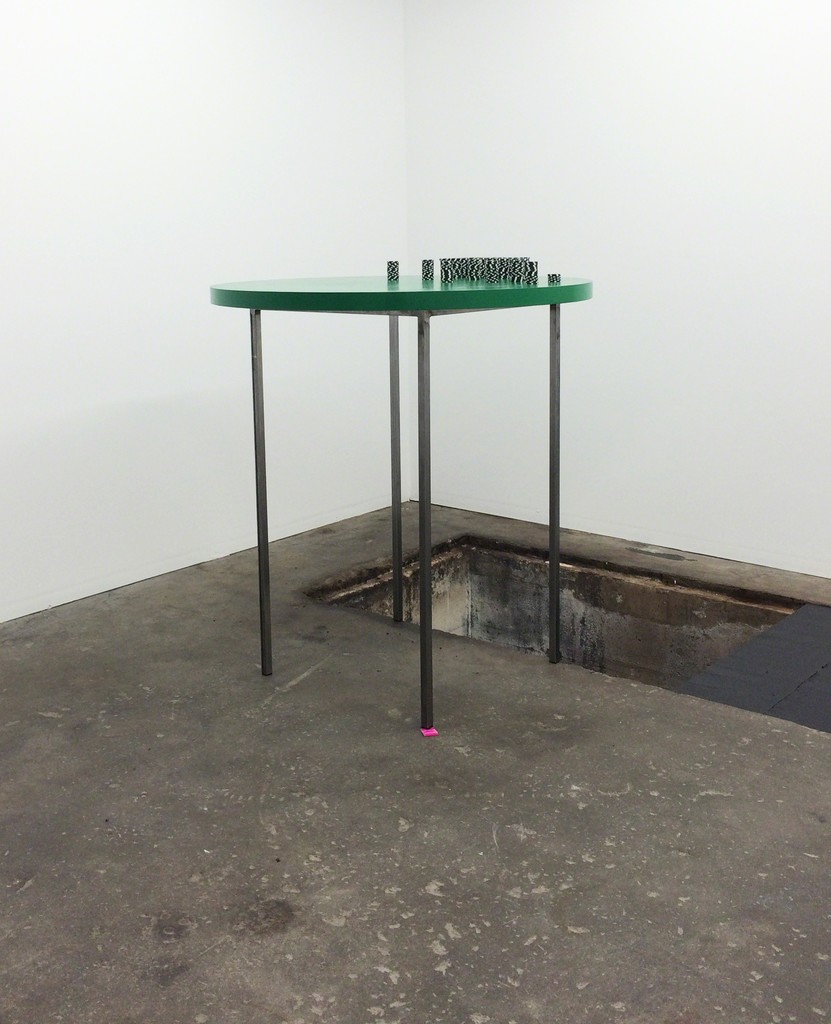 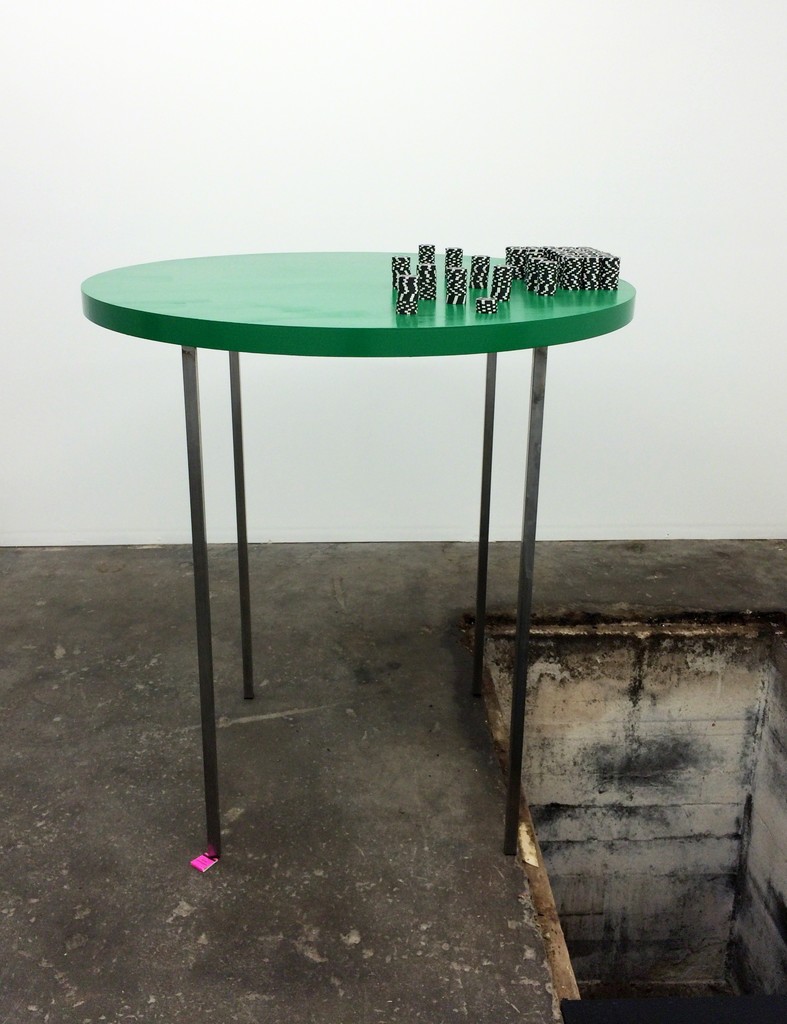 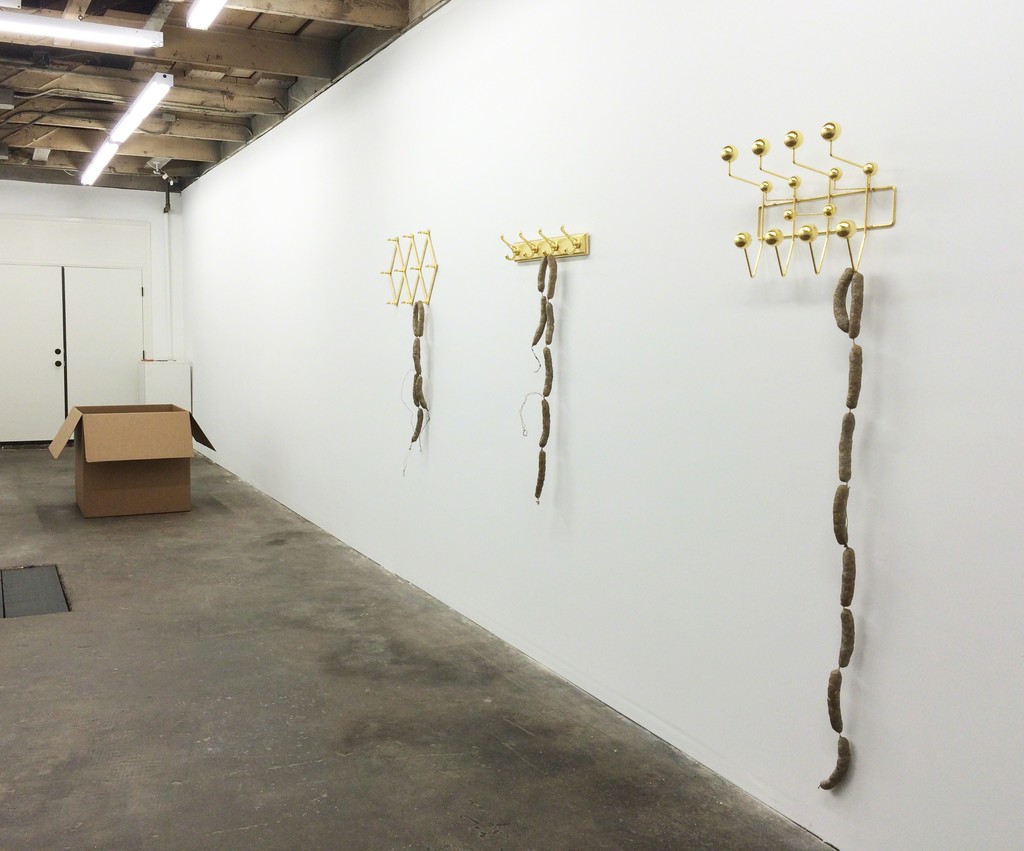 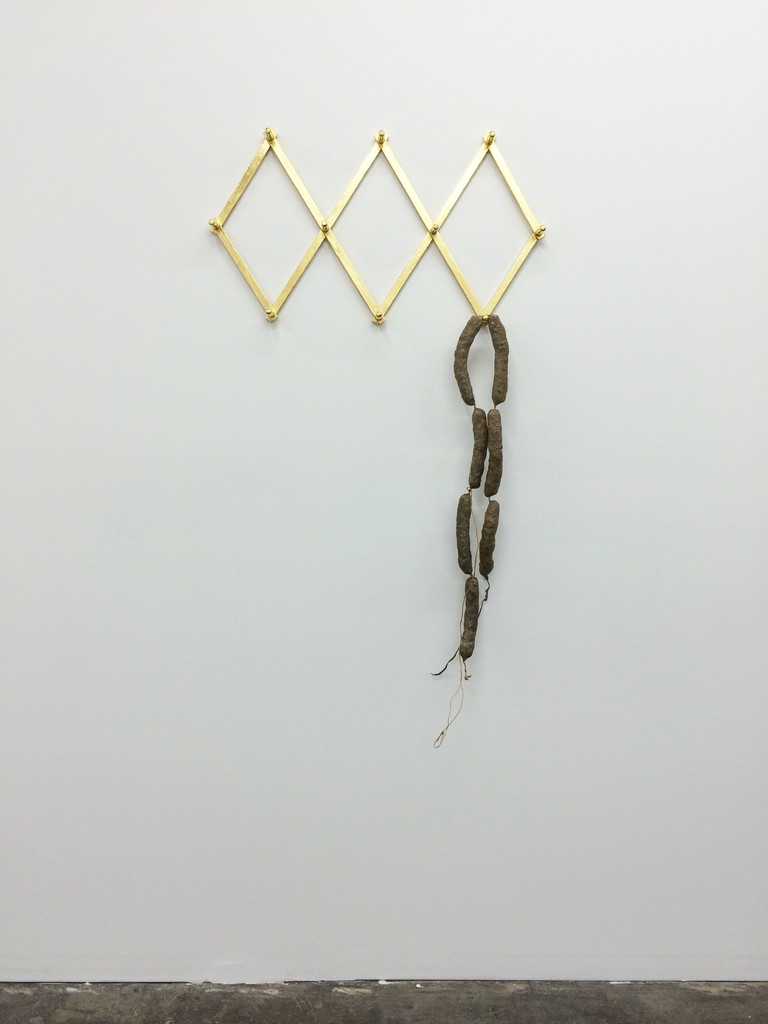 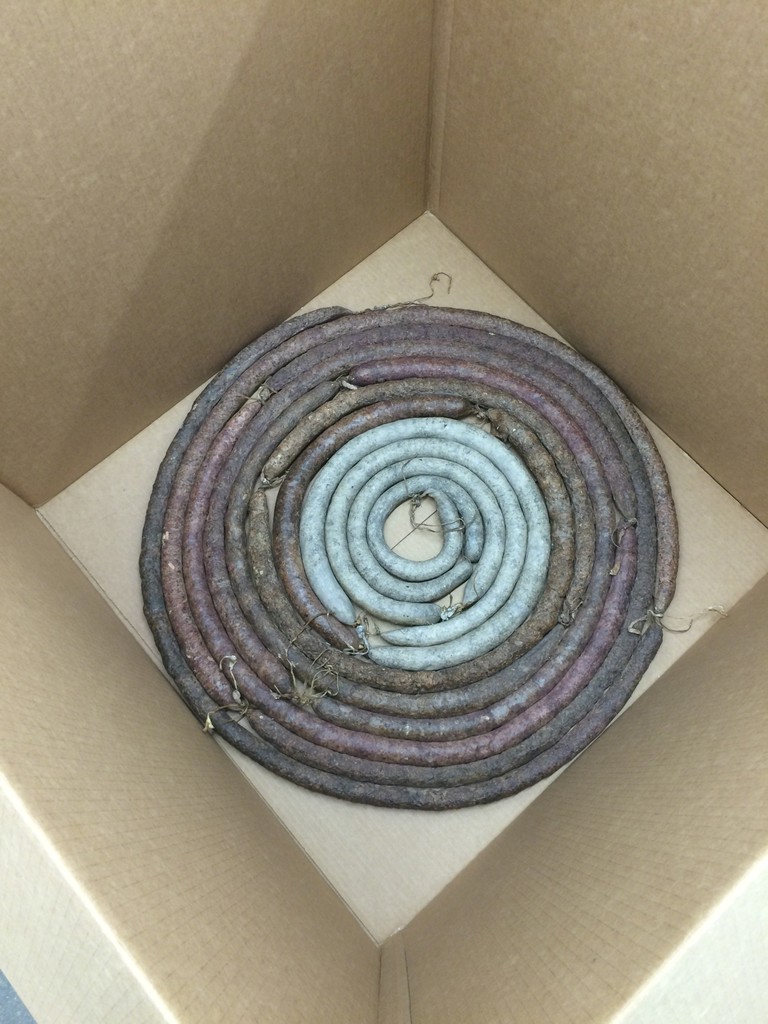 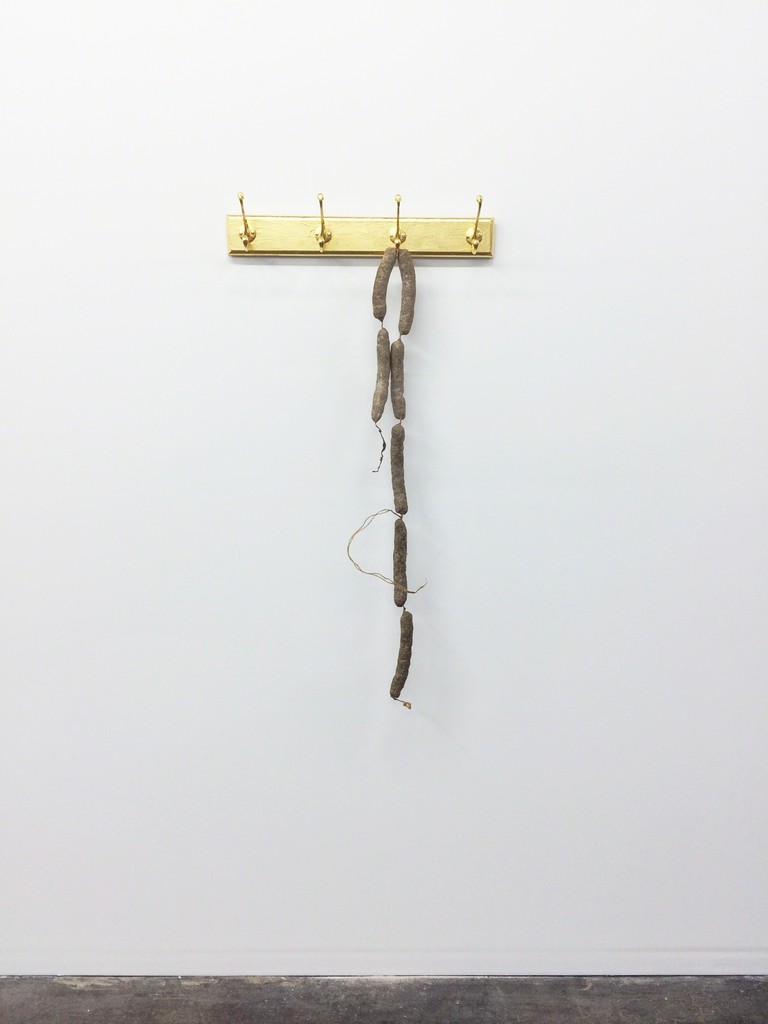 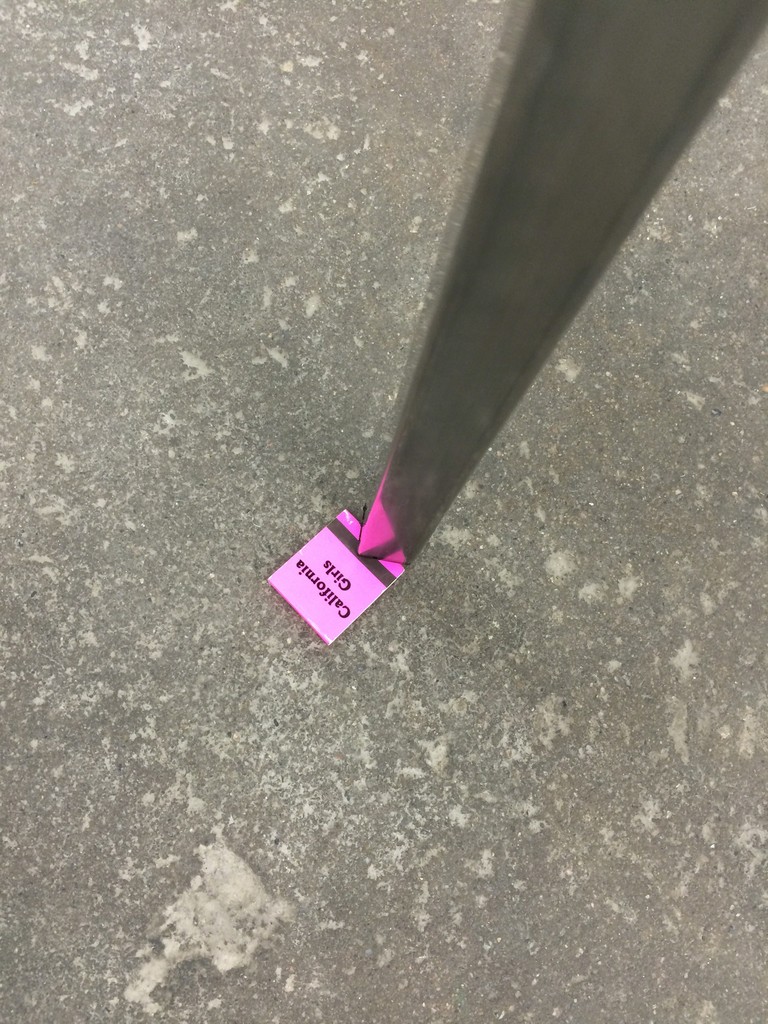 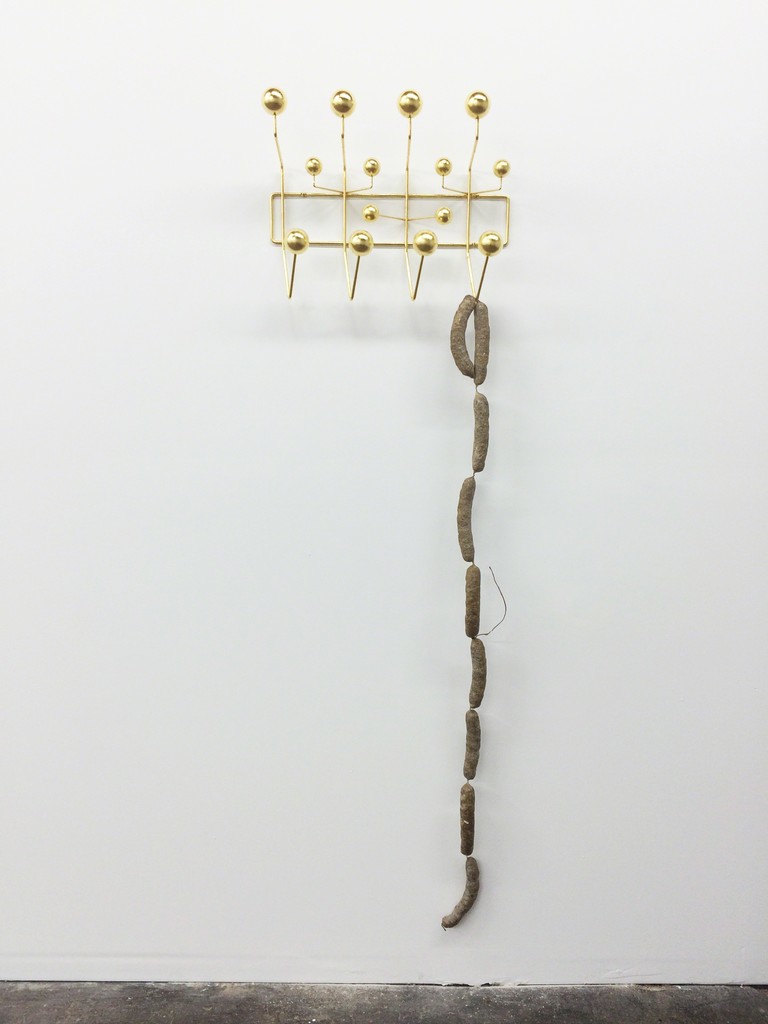 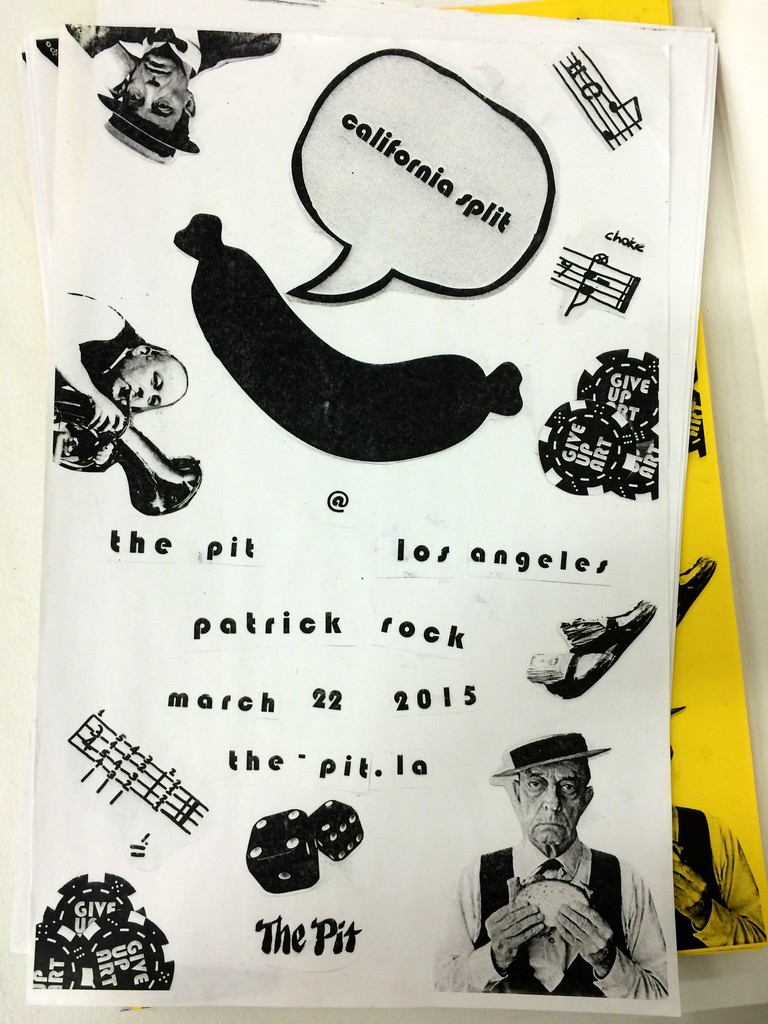 Poster made by Patrick Rock to accompany California Split. 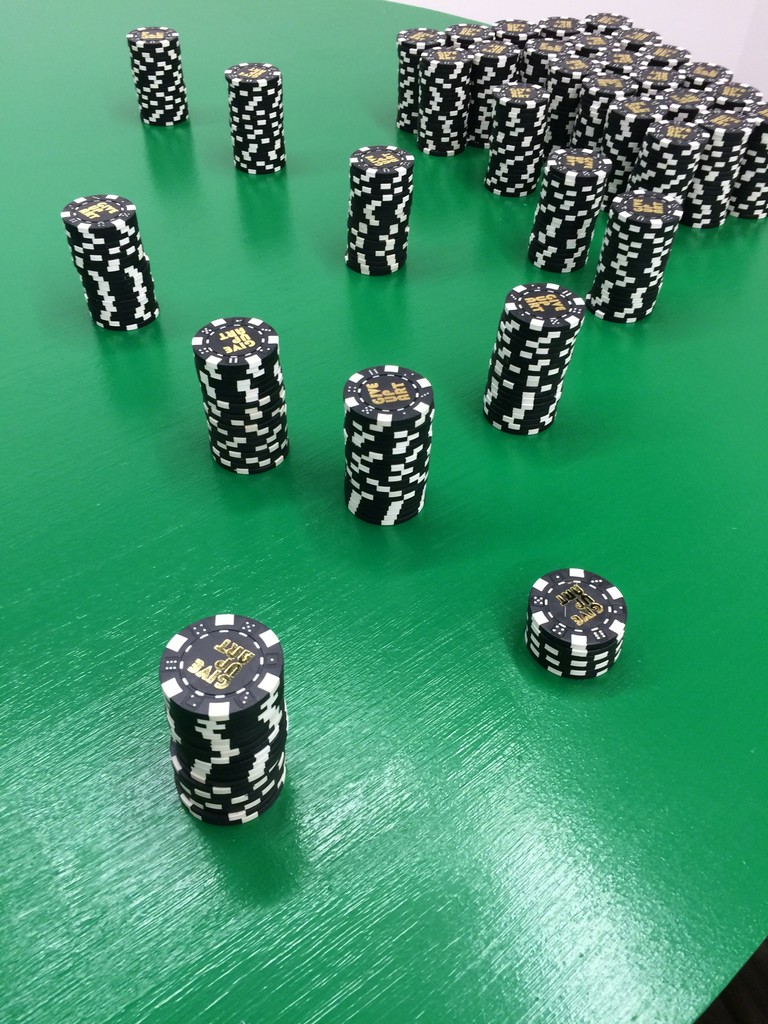 “California Split” takes its title from Robert Altman’s 1974 film of the same name and highlights the artist’s unique and humorous brand of social and institutional critique. The exhibition will feature a video projection, sculptures, and installation based works.

A 2 color Risograph printed zine has been published by The Pit to accompany the exhibition with text by John Motley and Adam D. Miller. Please contact The Pit at [email protected] to schedule a visit to view the exhibition if unable to attend the opening reception.

The following was written by John Motley for “California Split”:

In the final scene of Robert Altman’s “California Split,” 1974, Bill (George Segal) is utterly drained, slumped in a quiet corner of a casino. He’s just followed an epic poker run with an equally epic crapshoot, when he suddenly bolts from the table, leaving $82,000 in chips for partner Charlie (Elliott Gould) to collect. Charlie, on the other hand, is positively juiced, planning lavish purchases and, of course, their next gambling escapade. But Bill is depleted. He’s so far on the other side of every gambling high he’s ever known that, of his hot streak, he confesses: “Charlie, there was no special feeling. I just said there was.” A moment later, he says he has to go home. This gets a rise out of Charlie, who can’t wrap his head around defeat or retreat. He lives to play; he’s already home.

When the film’s writer, Joseph Walsh, imagined these two foolhardy gamblers, he could just as easily have been writing a parable about two artists, one whose very existence is immersed in art and a second for whom art is a way to clock out of the humdrum. Charlie is a card shark who will die if he stops gambling. He sees every moment of his life as bound up in the game. When he’s held up at gunpoint, he doesn’t fork over his winnings; he bets that the mugger will settle for half. And he wins again. For Bill, gambling and life are polar incongruities. Too much time cooped up in the office can only be remedied with hijinks at the race track. Too much time studying tip sheets and the view from a desk sounds like a winner. He’s a weekender. Charlie doubles down. Bill folds and cashes out.

But what are the spoils of art? What propels artists to keep playing, even in the face of mounting losses? There are artists who traffic in safety and predictability, developing a signature saleable style and never letting go. Their jackpot is obvious. But what about artists like Charlie, who revel in an openness to chance and welcome both triumph and failure as inevitable outcomes? Such artists are motivated by the thrill of the game itself — the “special feeling” Bill faked. They don’t throw themselves into it for even dealer splits or entry into exclusive after-parties. They play for something far more slippery: a currency they can’t cash out. The glittering prizes that spur on the true artist are ultimately immeasurable and exclusively symbolic. They play to advance the game and, with any luck, re-write its rules. They play for intellectual exchange, to be nourished by ideas. They play for the possibility of exerting their influence, inviting a new generation of players to sit at the table. Their play is both indulgent and selfless.

The sculptures and video in Portland artist Patrick Rock’s “California Split” are inspired by the risk-it-all attitude of artists who, like Charlie, ignore the odds and bet everything on their work. One piece, “TILT! ~ 100k & 200mcg,” 2015, provides a succinct illustration: a table, painted poker-felt green, is loaded with stacks of chips. But what first seems like the aftermath of a lucky streak quickly breaks down. The chips — there are 666 of them — each bear the phrase “Give up art,” at once mocking the artist’s ambitions and tempting him to abandon them. They make plain, too, that they cannot be redeemed for cash — unless, of course, the artist calls it quits for a job with a literal payoff. The table itself is a precarious construction: slightly too high and with one leg propped up by a book of matches. Through this choice, Rock suggests that even the accumulation of symbolic wealth is unstable and subject to collapse without warning. The game is rigged.

Even the most committed artist is plagued by doubt. And when he’s down on his luck, the allure of hanging it up is everywhere. In the exhibition, Rock pays tribute to this temptation through a series of gold-leafed readymades: a Charles Eames Hang-It-All (“Stand in the Corner,” 2015), a replica of Marcel Duchamp’s readymade coat rack (“Trebuchet! Trebuchet! Simulacra!,” 2015), and an expandable rack like the one Buster Keaton weaponizes with a boxing glove in “Cops,” 1922 (“Father Stone Face & Fatty,” 2015). All three are visual puns, playfully riffing on the ever-present come-on to hang it up, call it quits. But for the artist who conceives of art and life as inseparable, walking away from the table is tantamount to suicide. It is no coincidence, here, that the symbolic retirement in hanging one’s hat and coat after a day at the office calls to mind the figure of a hanged body, dangling and swaying from a noose, as lifeless as an overcoat. Rock counters this possibility by subverting their functions: he not only imbues them with the symbolic value of his own artistic labor and intent, but, with the 23-karat gold leaf filigree, invests them with a veneer of real value. Like an art object hanging in a museum, these racks are untouchable, off-limits. For the artist like Charlie, there is no punching out. Work is never finished.

That an artist could sustain his life on symbolic value is a cockeyed kind of truth. Throughout the exhibition, Rock has strung dozens of home-made sausages from the racks and crammed them into a cardboard box. While these works have been made using a traditional recipe — that is, infused with a mélange of spices and smoked — their contents are decidedly inedible, ranging from shredded copies of the softcore porno mag “Juggs” to shredded copies of Sotheby’s and Christie’s auction catalogs, sourced from one of Portland’s most prominent collectors. These works reference Swiss artist Dieter Roth’s “Literaturwurst” series, in which he created sausages, substituting the shredded pages of books and magazines he admired for the meat. Rock preserves Roth’s ironic collision of conceptual content and culinary form, but complicates his commentary on figurative and literal sustenance. With his phallic sausages stuffed with these two forms of “literature,” he opens a dialogue about what nourishes and what poisons. That these works are called “Collectors Sausages,” though, clues us in to the critique, suggesting that all of our unwieldy desires — whether for sex or fine art — commingle inside of us, ground up, inseparable, and stuffed into a casing skin. The sausages are stand-ins for our own bodies.

While the stakes of the game engross the true artist, there are costs that play out away from the table. A devotion to art may pay off in intangible ways, but, just as easily, it may take its toll. Critical neglect, professional stagnation, and creative block are sizeable risks, but they pale in comparison to depression, substance abuse, bankruptcy, and suicide, which have claimed many of the visionaries who struggled — and failed — to reconcile the ambitions of their art with the cold hard facts of their lives. In a video titled “I know… I know… I know…,” 2014-2015, Rock addresses this ultimate risk. Hiding behind black-and-white portraits of artists, writers, and filmmakers, who are all notorious for their uncompromising art and lives, Rock repeatedly pierces the portraits with his tongue, so that these angry men appear to bait viewers with a playground taunt. The move animates their disgust with the world as they found it, a sentiment that no doubt fueled their ambitions to remake the world in their art, no longer bound to those conditions. But in every instance, Rock is behind them, like a slapstick puppeteer playing for cheap laughs. He knows something they don’t: It’s all just a game.

Patrick Rock is a conceptual artist and the founder and director of ROCKSBOXCONTEMPORARYFINEART in Portland, Oregon. ROCKSBOX functions as a short-term international artist residency and exhibition space with a mandate to support artists producing contemporary conceptual and performance-influenced work. Rock is the director and co-founder of the free summer school C.O.P.S. (Conceptual Oregon Performance School) a free performance and critique based program at ROCKBOXCONTEMPORARYFINEART, as well as a co-founder of ROCKSBOOKS, Leipzig/Portland an artist and designer ran publishing house for artist catalogs. Rock is also a co-creator of A Portland Conversation In Culture, a printed and online guide to contemporary art venues in Portland, Seattle, and Vancouver BC. Patrick is the past director of the PSU School of Art + Design Exhibition Galleries at Portland State University in Portland, Oregon, where he is visiting art faculty in the MFA studio and undergraduate programs. Rock has exhibited his performance, installation, sculpture, and video work internationally. Most recently with I know, I know I know, Coral Brush Node, at Fourteen30 Contemporary, and the forced-air-inflated viewer-interactive jump-room-sculpture Oscar’s Delirium Tremens at PICA’s 2011 TBA Festival in Portland, Oregon. As well as performing with the mobile-rolling free-restaurant AMERICAN MEAT LLC., and the post-post-post-hunk-punk band PISS!, at the Sequences Festival in Reykjavik, Iceland. Patrick Rock is alumnus of the New Genres/Studio-10 program at the San Francisco Art Institute.