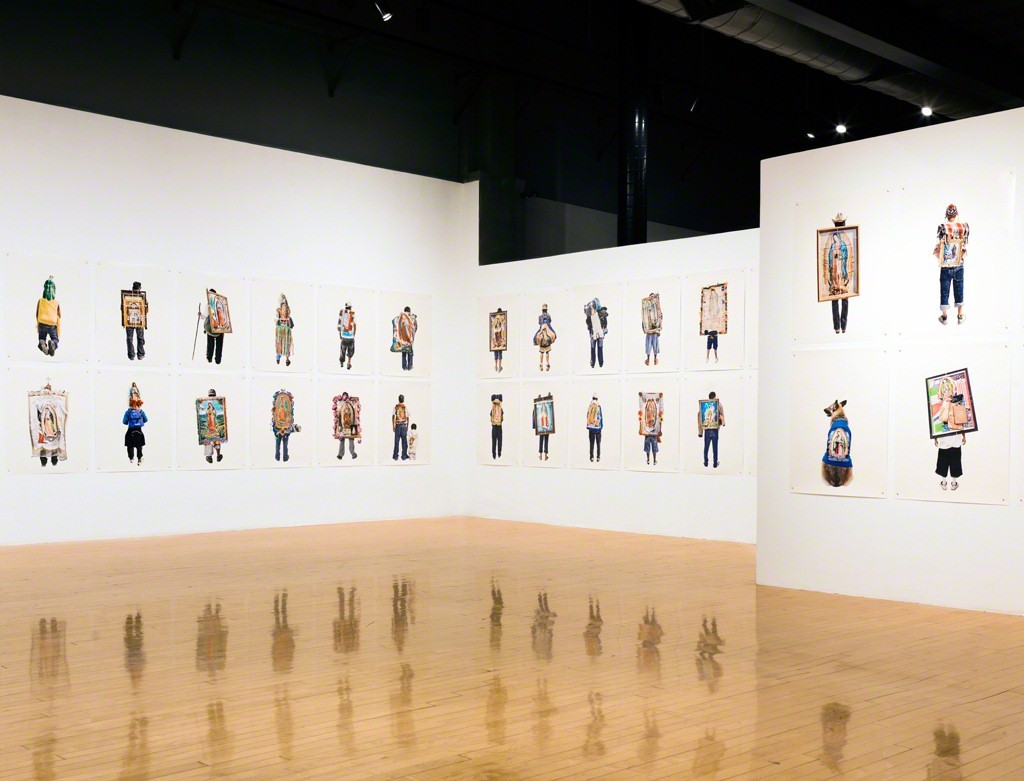 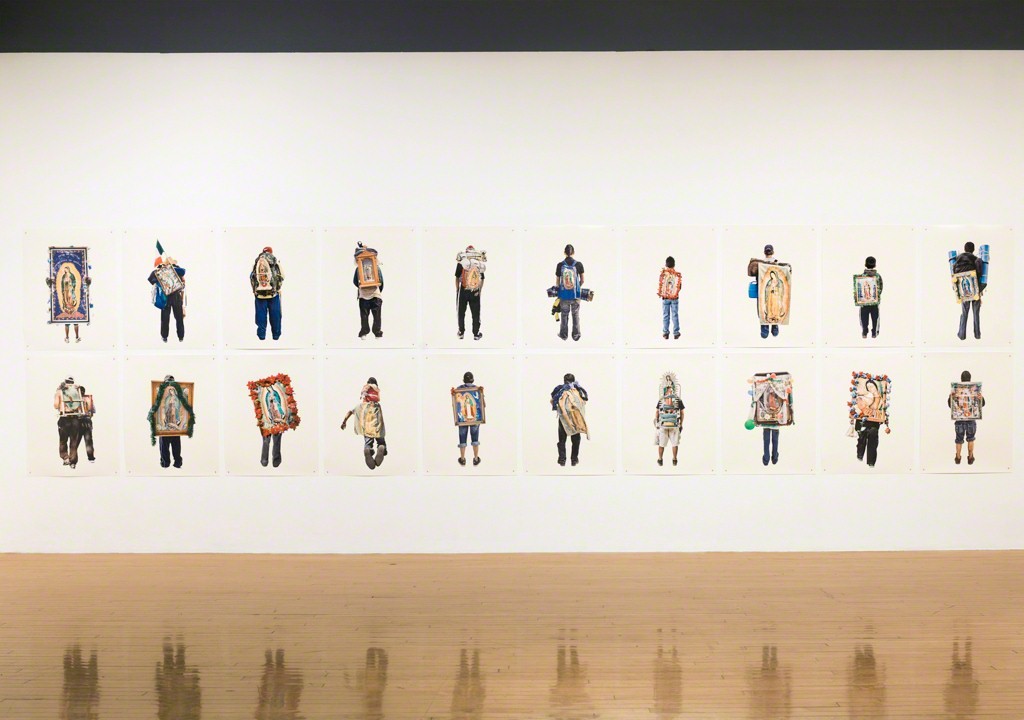 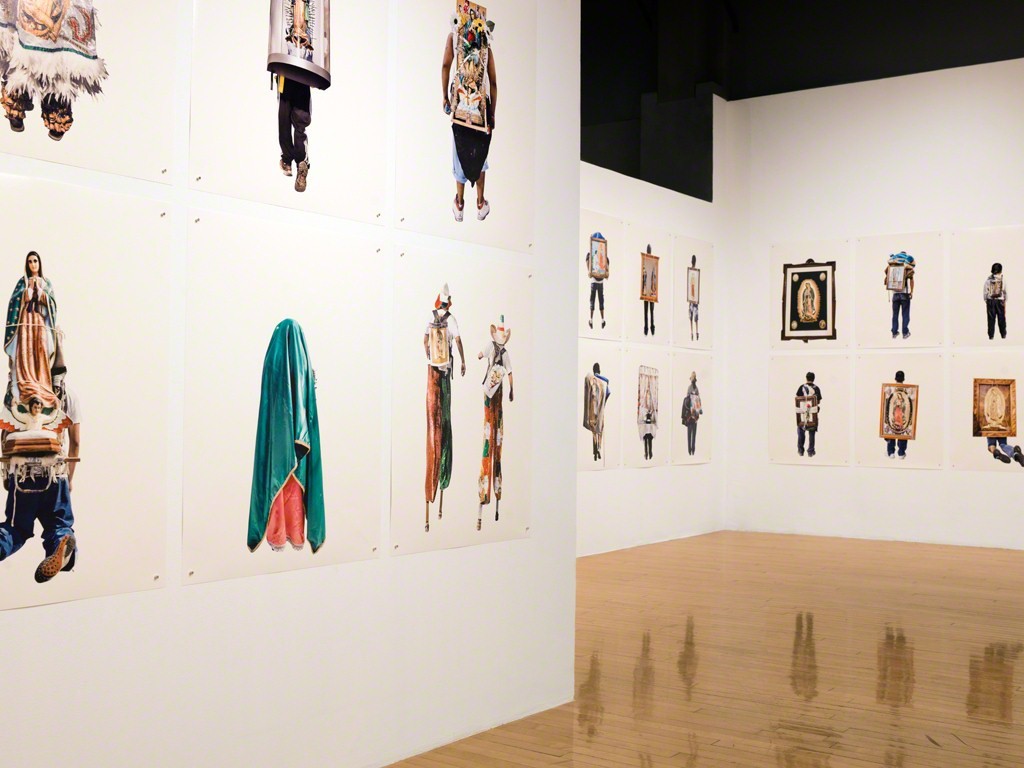 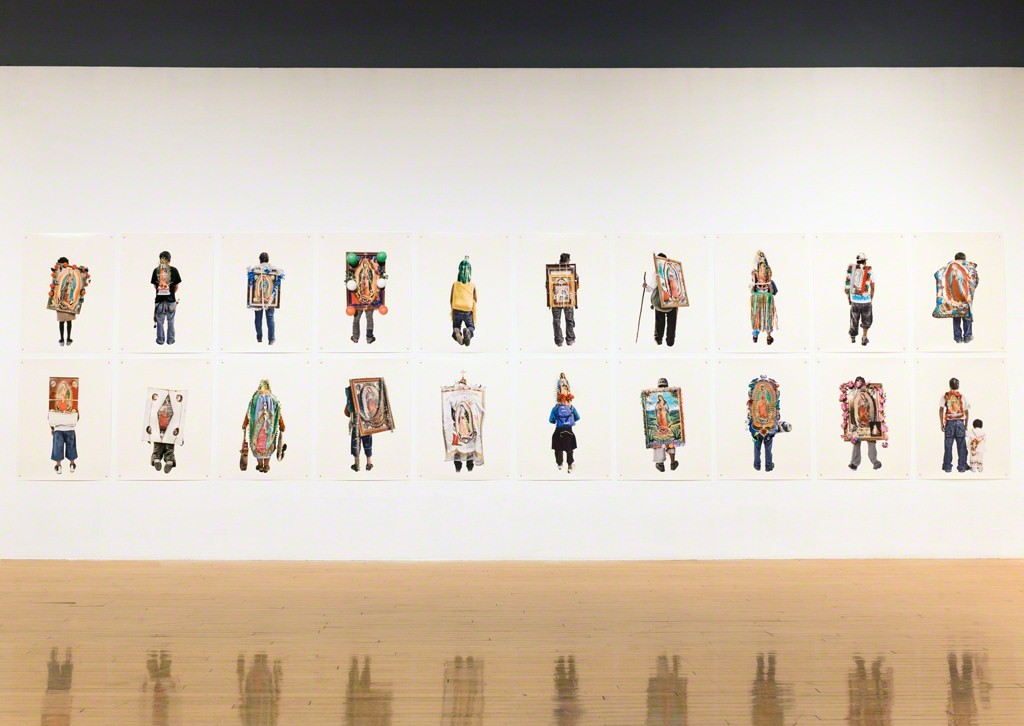 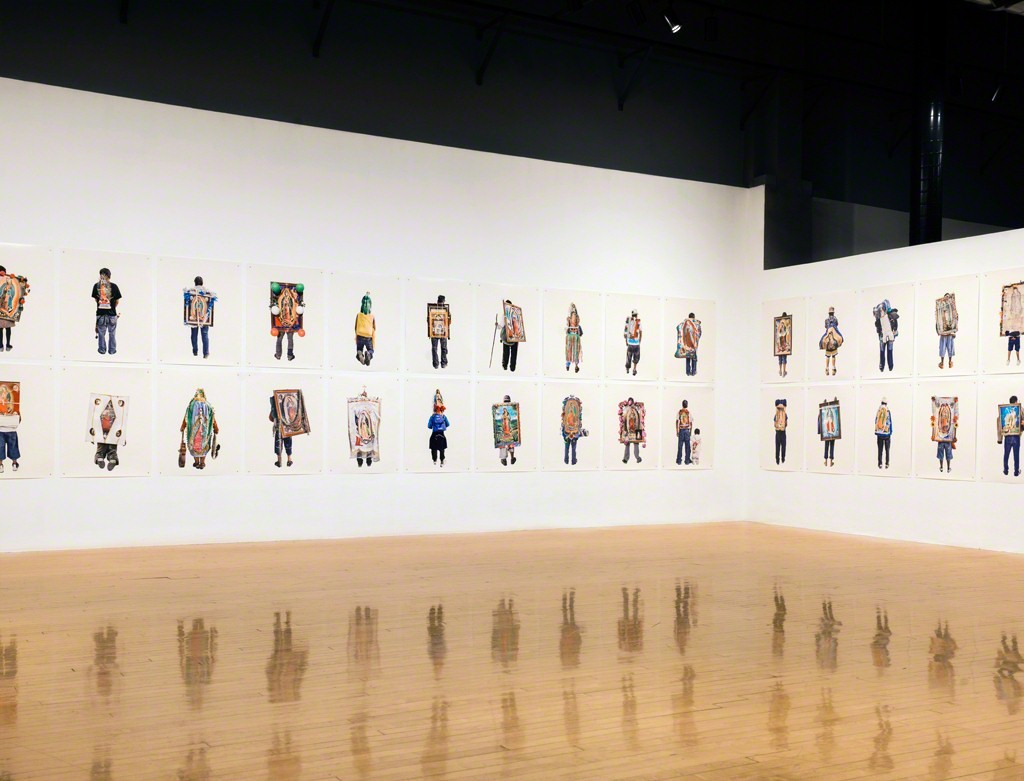 The issue at hand, in all its dimensions, will be the image. Images and images and images. And the way in which photography produces these images of images, inserts itself into them, deciphers them, reproduces them, transforms them and gives them a meaning in a range of strata and en abyme, well beyond what they tell us they represent and show.

In Mexico, the Virgen de Guadalupe is omnipresent. Much more than just a reference to the apparition, dated 1531 on Tepeyac Hill, she has become – and in this, she has nothing in common with the sole belief in the miraculous apparition of the Virgin Mary in Lourdes or in Fatima – the icon of a country, a nation (the Queen of Mexico), and even one of the practically syncretic figures of a continent not lacking in them, to the point that Mexicans also describe her as the “Empress of the Americas.” She can be found all over the place, in every form, painted, drawn, sculpted, in churches, of course, but also in shops nearly everywhere, on the wall, sketched on a food can, on a mirror, hanging in the middle of family portraits, in the shape of a fresco and also in more precious form, beneath the vault of a colonial church, where she is adorned with splendid garments, as well as in plastic, outside, transformed into a souvenir and trinket. She is even found in Los Angeles, where Latino gangs have graffitied her on walls and wear her proudly as a tattoo, a sign of gratitude and hope for protection, on their backs and over their hearts, when she’s not on their biceps.

Once a year, from all around the country, pilgrims come to the sanctuary at the top of Tepeyac Hill to pay homage to the Virgin of Guadalupe, ask a favor of her, for healing, love, wealth, a more fortunate hereafter than the existence they often lead on earth. They flock in their millions; it is said that six million come each year. They come on foot, walking for days, some alone, others with their families, often accompanied by young children, who are sometimes in traditional dress and whom end up being carried on their parent’s shoulders when they are too exhausted to keep moving forward. They walk and pray in the heat with a sole objective: this virgin, this sacred place, to get close one time at least, as with so many religions, to the origin, supposed or real, it doesn’t matter. To be there. To be worthy. To such a degree that many end up barefoot, even walking on their knees, suffering. To be worthy. To merit benevolence, assistance in this world and pardon in the next, to merit that the Virgin gladly guard them with her protection. Because the Virgin provides salvation. Nothing hugely different then from many other pilgrimages and collective demonstrations, which are, first and foremost, a cluster of individual decisions drawn together by the same belief, nothing except the impressive number, which shows the extent of this faith in a “good mother,” radiant and always represented in an oval of light emanating from her. The Virgin of Guadalupe is solar. Right at the beginning, photography was talked about as a heliographic drawing.
There is however, an essential, fundamental difference with other pilgrimages and it concerns the image: the image of this Virgin, who is of course adulated. Like a heightened manifestation of this relationship to the image that Catholicism has displayed in a variety of ways and with astounding singularity since the “imprint” of the Holy Shroud, a number of the pilgrims bear the image of the divinity that they have come to implore and glorify. But not in the form of these medals or scapulars that are the customary form of a superstition related to jewelry or ornamentation; no, they carry her on their backs, in a variety of forms, genuine versions of a motif in variations that are often popular and traditional, sometimes industrial – some are now produced in China. The pilgrims carry her right to the end of the road. Thus they partially become a living image of this virgin they are going to worship and we can easily visualize, after so many miles, a situation where, in front of the original image, carrying on their backs a variant of this same image, they will look with a mixture of entreaty, respect, joy, and dread before kneeling and averting their gaze, kneeling respectfully before leaving, still laden down with the representation of the icon.

Because it is indeed a question of a burden for certain people for whom a banner or flag pinned to their backpack or wrapped around themselves does not suffice. Anything goes: huge statues, along with small, sometimes delicate ones swaddled in a blanket, paintings that are larger than the people carrying them, displaying every kind of esthetic, with huge frames, in carved wood, pokerwork virgins, others roughly sketched, drawings, works in cross-stitch, paintings as delicate as popular ex-votos, others finely embroidered on plain or precious fabrics, on fur, mantels, still others, probably more precious than the rest, that have perhaps come from a chapel, in their glass and metal container. Thousands of virgins, thousands of images in movement, like an uncountable immensity that would speak of the intensity of belief.
From this accumulation that seems infinite, Alinka Echeveria has chosen three hundred and fifty figures. She has organized her own collection, carefully, neatly, simply, without resorting to effects. But in color, which in this case is essential, if only to allow us to perceive the countless decorations, artificial flowers, offerings (some pilgrims give the impression that they are moving about with a portable altar), along with drinks and diverse objects, which, as is often the case with the shoes being worn, indicate to us that we are well and truly at the beginning of the 21st century. Although Echeveria did not indulge in any stylistic rhetoric when taking her photos, she nevertheless – and this is essential in photography, and even more so when it is pertinent the way it is here – established an extremely effective methodology. She was not interested in the crowd or in sociology – although a certain number of signs could lead us to suspect that the subject was a varied population, but one that was on the whole working class and probably rather humble.

She focused on the images and, to do so, photographed the pilgrims from behind. Hence, she did not make “portraits,” but an inventory of the situation of carried images. Images that are sometimes poignant when only the walker’s lower legs appear below a huge frame, or when the upper part of a statue has replaced the person’s head. The pilgrim has changed shape, half-man, half-image, a strange splicing has transformed him into a fabulous animal that could be a relative of a centaur, just as this creature seems branded on its very body by a new identity in which it is difficult to separate what relates to the sacred and what relates to paganism. This point of view – the true meaning of the term, which begins physically – of the photographer is coupled with an approach that has as much to do with method as with esthetics. By outlining these images, she isolates each of the characters, extracts them from the crowd, the mass, and focuses our attention on the image that they cart along, thus forcing us to decipher the modalities of representation. This gives rise to a kind of catalogue that, in its diversity, becomes fascinating, dizzying. The effectiveness of the whole therefore, stems from this tension that eliminates the anecdotal, thereby obliging us to read the images. Where have they come from and where are these people going, so laden down? Moreover, do they actually move? Are they anything other than what they carry on their backs? In real life, certainly, but not in Alinka Echeveria’s photographs, which take us back – and she plays with this brilliantly – to the imprecision reflected in photography, thereby obliging us to confront an image, nothing but an image. It is by the point of view that she adopts, by the radical nature of the decontextualization that she makes them undergo, that those who walk on The Road to Tepeyac, whom we will never see (just as we will never see the sacred place), become a fabulous adventure of images. In a series, in a successive piling up of images and imageries. They become image because they carry an interpretation of the image they are going to venerate, and because the only thing photography retains of them is this echo image of another image. And it is obviously because belief, for want of generating visions for each person, has materialized in an image to become “the Image”, that this is possible.

The whole obviously constitutes an impressive document, but it is does not fall within the documentary aesthetic such as it could be practiced historically (Walker Evans, August Sander), or in the recent period with its principles of formal repetitions of point of view and the notion of series. She nevertheless proceeds from this perspective, but she splits away from every idea of reportage (and tale, anecdote) as much as she establishes an original combination between documentary and conceptual work. The absence of any spatial reference shifts, with great liberty, the intention of a single record toward a strange feeling of paradox between the characters’ vagueness and the weight they carry, and what this represents.
All of this also refers back to a large part of this Catholic iconography in which pain, not to say masochism, has provided so many bloody representations and which, from the baroque to the mystical, has produced painting, sculpture, and literature associating the sublime and suffering, gilt and tears, elevation and contingency.
Here, we are not immersed in what it is customary to consider as “great art”, but we are astounded by the inventiveness of the representations, which are always skillfully done in their own way. There are paper or plastic flowers, sequins and embroidery, leather, wool, cotton, silk, ribbons, metal and wood, frames and plaster, pencil, paint, gilt, humble enhancements. And there is the deep, Mexican color, and there is also, when one of the pilgrims carries an enormous cactus leaf with sharp needles, great cheerfulness, visual jubilation. But no, there is only It. The Image.