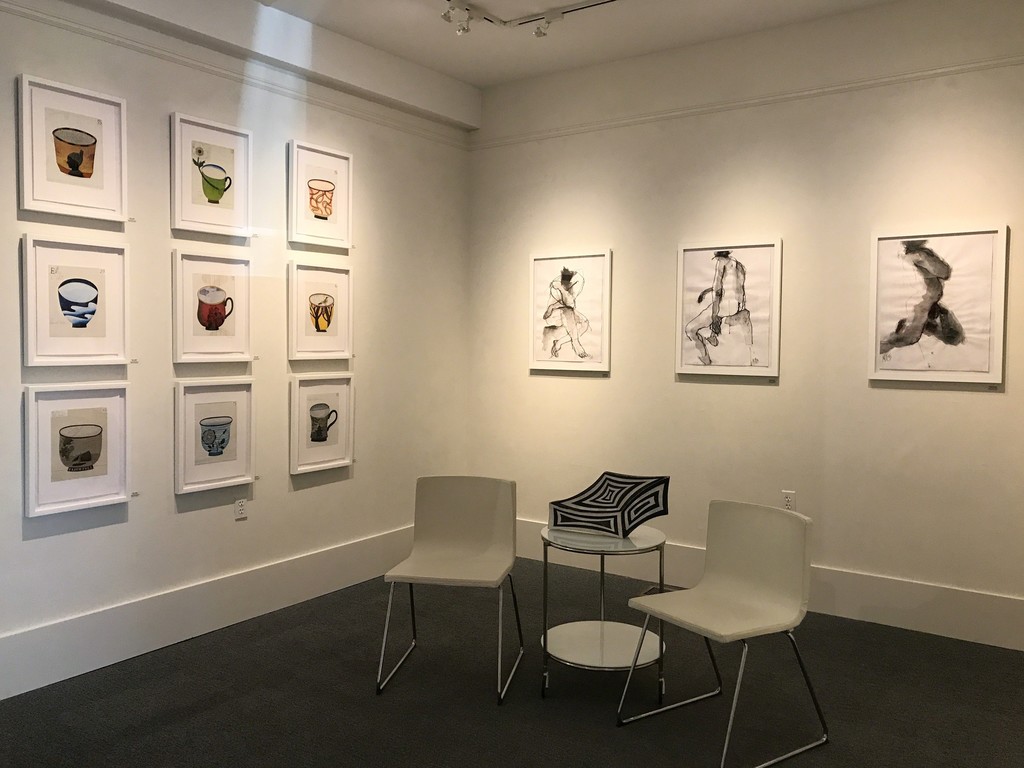 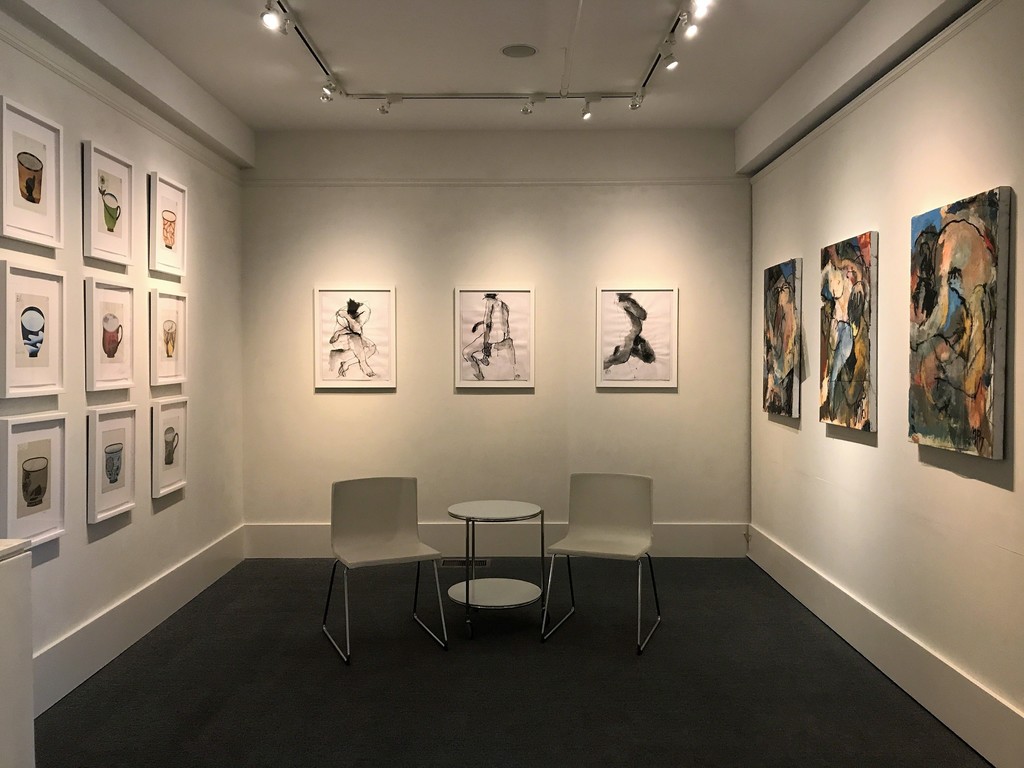 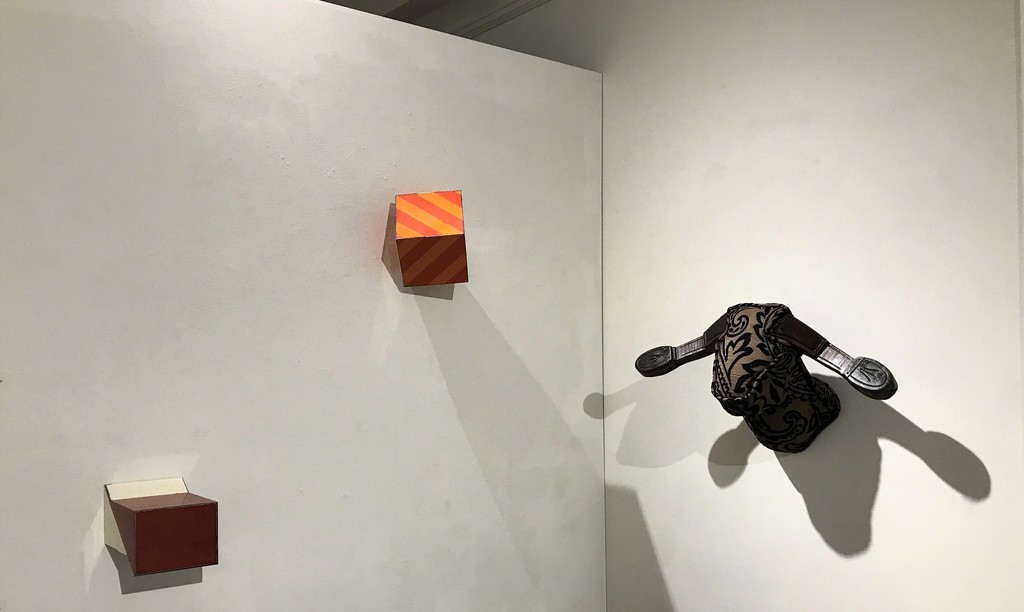 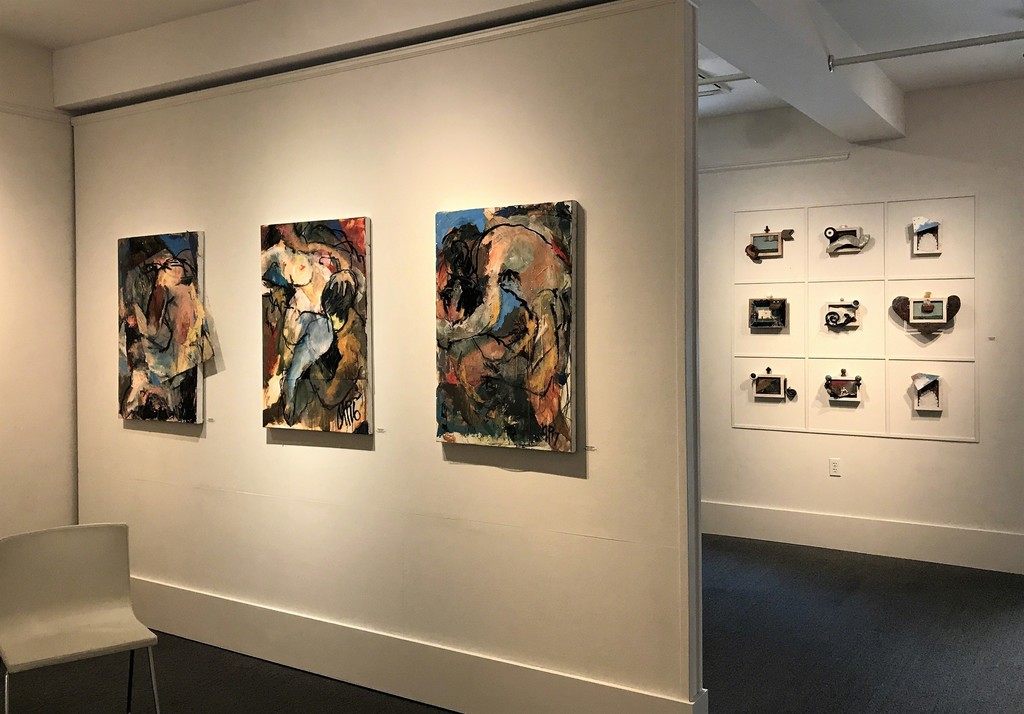 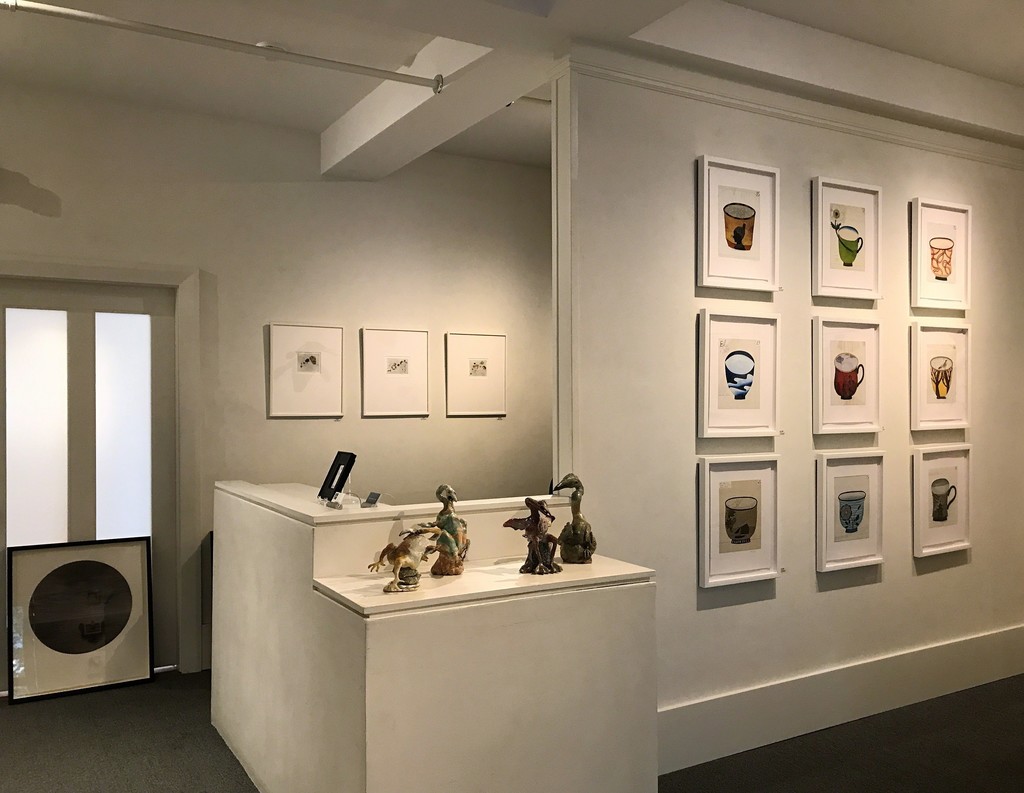 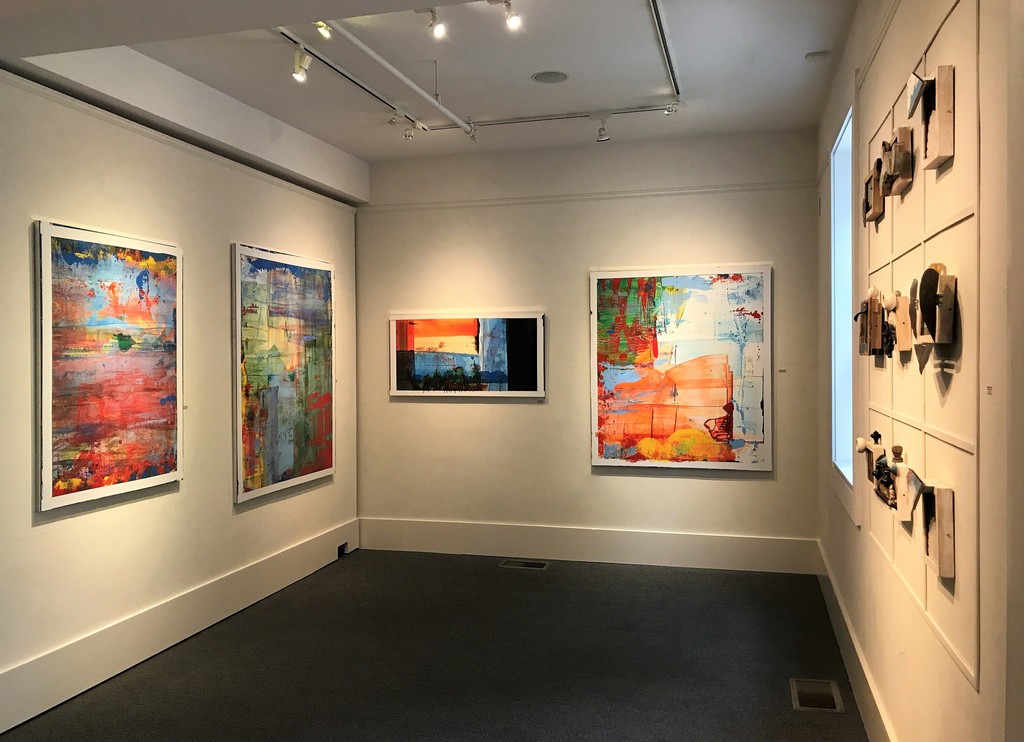 MARK ADAMS presents a suite of new editioned prints that incorporate his love of drawing in travel sketchbooks and use of maps and data. The images consist of pages selected from several different sources including The Eldridge Book of Tides -- a classic reference published annually since 1875 and still vital to mariners - that are overlain with watercolor and ink drawings of expeditions, shipwrecks and refugees. Second, are walnut ink drawings on Nick Flynn's The Ticking is the Bomb that explore themes of loss, risk and bewilderment. The third source are the artist’s travel sketch journals of Morocco, Myanmar, Tibetan India and Bhutan. These gorgeous books are filled with themes of indigenous geographic knowledge, human ecology and a quest to connect visually across geographic, societal and language barriers.

This exhibition has also been planned as a preview and threshold to Mark’s upcoming exhibition at the Provincetown Art Association and Museum from September 29 - November 12, 2017. The exhibition is titled, MARK ADAMS: EXPEDITION and will be a career retrospective along with new works and a constructed structure designed after Darwin’s Beagle where the viewer will see works on paper and can interact with the exhibition. There will be a reception for MARK ADAMS: EXPEDITION on Friday, September 29, 2017 at 8pm.

ALSO: Mark will read at our neighboring AMP Gallery on Thursday July 6, 2017 at 7 PM. AMP Gallery is a live exhibition space located at 432 Commercial Street in Provincetown’s East End. Check them out at http://www.artmarketprovincetown.com/

We’ll also present a suite of new works from RAMON ALCOLEA, intimate and playful constructions made of wood and found materials from his Provincetown Notes series. Presented as a cabinet of curiosities these twelve delightful constructions have been called “elegantly irreverent”. Each is the size of a small book and made with wood and found objects that reflect the emotional topography of Provincetown from beach flotsam to the town’s discarded objects; all remnants of its daily life.

Alcolea studied at the Corcoran school of art, Washington DC and holds a BFA from Parsons School of Design in New York City. He has maintained a working sculpture studio in Provincetown since 1989. A recipient of a Pollock Krasner Foundation grant, a Skowhegan grant, a grant from the Massachusetts Cultural Council and a New York Cultural Council grant among many others. His work is part of the permanent collection at the Provincetown Art Association and Museum among many others.

The gallery is pleased to introduce ANNE SMITH to our roster. An American artist based in London, Smith has worked as a potter, teacher designer and illustrator. She holds a BFA in Ceramics for Boston University’s Program in Artistry and a MFA in Ceramics from The NY State College of Ceramics at Alfred University. She has exhibited extensively and has been awarded grants from the NEA and Massachusetts Artists Foundation. Her work is in the collection of Boston Museum of Fine Arts, Boston Public Library and Smithsonian Institution. Often, her work takes its cues from written forms. The tenets of haiku inspire and approach to blending discrete visual language into a poetic whole. A veil of handwriting suggests the presence of voice; markings pulled from documents offer reference and grounding.

For this exhibition, we will present a selection from 100 CUPS, a suite of paintings with mixed media intended as an homage to her deep background in ceramics. Akin to throwing pottery on the wheel, she paints the same cup form repeatedly, allowing subtle differences to occur. A matrix of repetition harmonizes her numerous variations. Without sacrificing the decorative familiarity of the cup, each piece defines its own unique intimate domain.

BAILEY BOB BAILEY will exhibit five paintings on metal. These works are the results of a system of predetermined assignments developed by the artist and given to himself in the studio that are designed to articulate a relationship between engineered art making and the removal of self-conscious obstacles in executing the work. Bailey has received awards from the Pollock-Krasner Foundation and Skowhegan School of Painting and Sculpture. Twice a Fellow at The Fine Arts Work Center in Provincetown, MA, he received his MFA from Virginia Commonwealth University in sculpture and studied furniture design and woodworking at the Wendell Castle School, in Scottsville, NY. He has exhibited internationally in Australia, at the Melbourne Art Fair and privately in Japan; and widely throughout the US. Bailey had mid-career exhibitions at the Provincetown Art Association and Museum; the Higgins Art Gallery of the Cape Cod Community College and at String Gallery, Wells College, Aurora, NY. He lives in Truro, MA.

BERND HAUSSMANN was born in Tuebingen, Germany and has been a US resident since 1994. He divides his time between his studios north of Boston and in western Maine where he also works with his wife Anne on a 400-acre nature project. Haussmann exhibits nationally and internationally, in galleries and non-profit venues. His work has also been visible at numerous art fairs such as Art Hong Kong, San Francisco Art Fair, Art Santa Fe, Texas Contemporary, Dallas Art Fair, Miami Project, Toronto International Art Fair, Los Angeles Art Show, Art Miami, and others. Haussmann has been a mentor and educator at Lesley University, Art Institute of Boston, and at New Hampshire Institute of Art; and has been offering courses at Castle Hill, Truro, and at the Provincetown Art Association and Museum, Provincetown, since the summer of 2014. He was the artist-in-residence at the Broad Institute of Harvard and MIT, 2012 - 2015.

For this exhibition, we will present works from his Red, Green, Yellow, and Blue Series. As we have come to expect, Haussmann seems to operate from inside the paintings, from somewhere behind the surface. Perhaps his skill as a printmaker has him moving in an environment free from moral relativism and defined by trust, where surprise is welcome and where color, light and interaction with surface work to allow us to engage more fully in the act of looking. His beautiful paintings include a restlessness and muscularity that do more than simply provide assurances to what is already known. This work raises questions and redefines the expected while remaining tethered to its own formal strengths and references to art history (in this case Barnet Newman’s “Who is afraid of …” and other early abstractionists such as Miro).

We are pleased to present two paintings on fabric from KAHN and SELESNICK, who will also exhibit at the gallery from August 11 – 30, 2017. These works are part of their signature mix of speculative fiction and false history, usually presented as large scale immersive installations featuring a wide variety of media and forms.

RICHARD SELESNICK and NICHOLAS KAHN have been collaborating as Kahn/Selesnick since 1988 on a series of complex narrative photo-novellas and sculptural installations. They were both born in 1964, in New York City and London respectively and both are British citizens. They met at Washington University in St Louis where they collaborated informally from 1982-86 as photography majors. After graduation and a couple of years of showing their art separately they migrated to Cape Cod, Massachusetts to work on an evolving series of projects, some painting based, some photo based, all involving fictional attributions, narratives and sculpture. Between 1988 and 1995 they worked on installations combining painted portraits on plaster panels, bread, honey and wax sculptures displayed in wooden ritual architecture. A residency at The Fine Arts Work Center in Provincetown Massachusetts helped them create an elaborate full-scale oaken chapel; Der Ruteloft des Betubten Bienenkaisers (The Rood-Loft of the Drunken Beekeeper) with 120 painted panels, all of heads in profile sprouting psychoactive plants from their mouths.

Currently KAHN AND SELESNICK are finishing a project called Dreams of a Drowning World, a suite of 100 photographs that functions as an epilogue of sorts to Truppe Fledermaus.

Nicholas Kahn lives in Ghent, NY with writer, activist and interdisciplinary artist Sarah Falkner along with two cats, two rabbits, and three hermit crabs. Richard Selesnick lives in the village of Rhinebeck, NY, with his wife, child, border collie, and a deft mouser.

MICHAEL PRODANOU presents a suite of paintings and works on paper in conjunction with his exhibition titled, ‘MANOS/PRODANOU: ARTISTS' CHOICE’ with Constantine Manos at Provincetown’s Fine Arts Work Center from May 26 - July 3, 2017 with a public reception on Friday, May 26 from 6-8 PM.

MICHAEL PRODANOU was born in Toronto, Canada of Greek immigrants. He graduated from the University of Toronto with a Bachelor of Architecture degree and practiced his profession in Europe, the Mideast, Canada, and the United States. He sold his practice in 1999 and began drawing and painting in 2000. He lives in Provincetown, MA and Dania Beach, FL where he also maintains studios.

He works primarily on canvas and paper making paintings and drawings of the human figure. He has studied with several well-known instructors in Provincetown and is an admirer of the Bay Area figure painters David Park and Nathan Olivera, as well as Egon Shiele and the German Expressionists.

STEVE ALEXANDER was born in Boston. He has traveled widely and lived all over the United States. An Army veteran, he lived several years stationed in Germany. He studied art briefly while living in New Orleans where he was co-owner of a shop called Rave On. He has an impressive knowledge of antique glass and other collectables and is, in the very best sense of the word, an autodidact.
Recently Steve moved back to Boston after some years on the Maine coast and is making art daily and at a furious pace, working in a storefront gallery/studio space in Jamaica Plain, an urban suburb of Boston's downtown. He makes paintings and objects with found materials and (sparingly) his own marks, but also seeks trashed paintings and cuts them up into small pieces of color and texture, using the pieces to 'paint' his own new work. In these 'mosaic paintings' Alexander finds meaning in forgotten fragments of everyday life, also suggesting a way of making sense from loss by re-purposing material and meaning here in the present.
Alexander's natural skill at embedding a highly personal narrative and his use of repetition as a restorative device sets his work apart from more typical outsider or folk artists. Meaning, material, humor, and formal issues are all woven naturally and skillfully into something that feels new at first glance and continues to engage with seemingly endless detail over time.
Part of Steve's studio practice is to pay forward the happiness he feels making artwork and showing it to the world by offering the proceeds from sales of his work to charities. Despite having navigated significant obstacles in his own life Steve maintains determined focus on the creation of beauty and the distribution of joy. For this project we will present a group of new mosaic paintings.