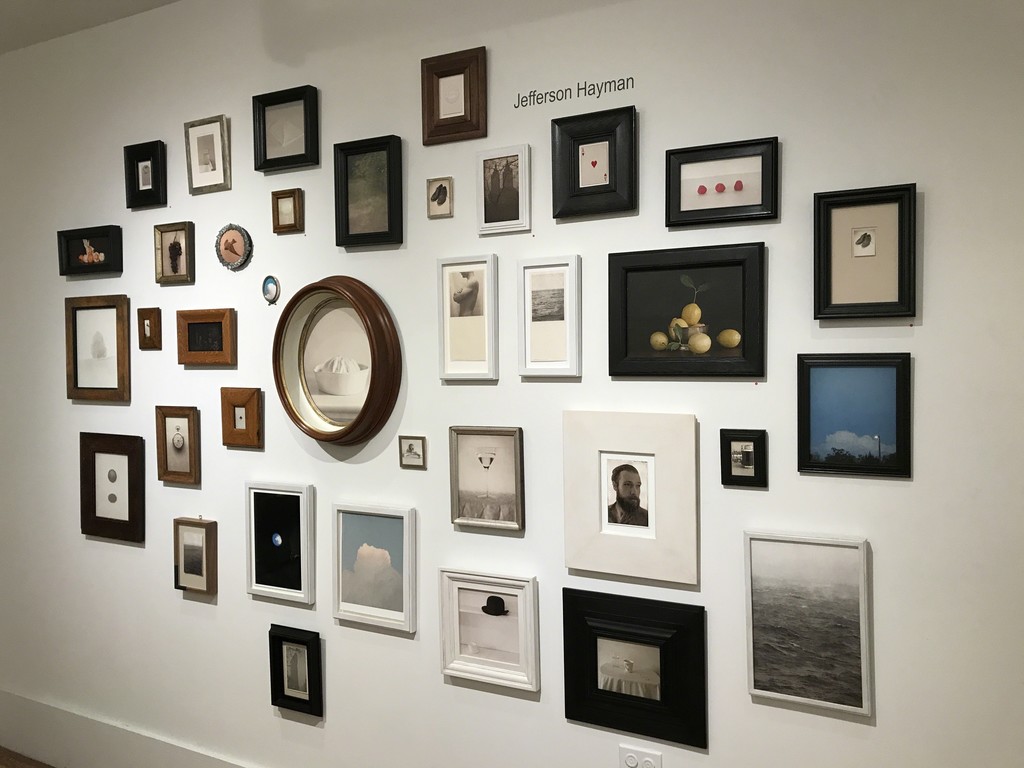 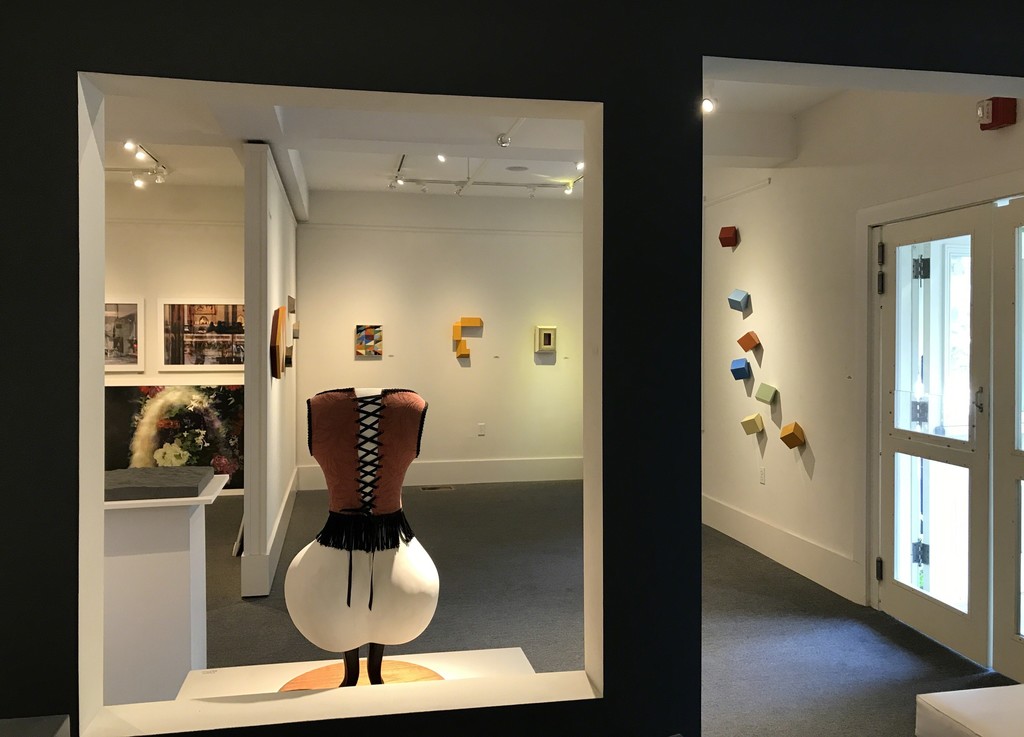 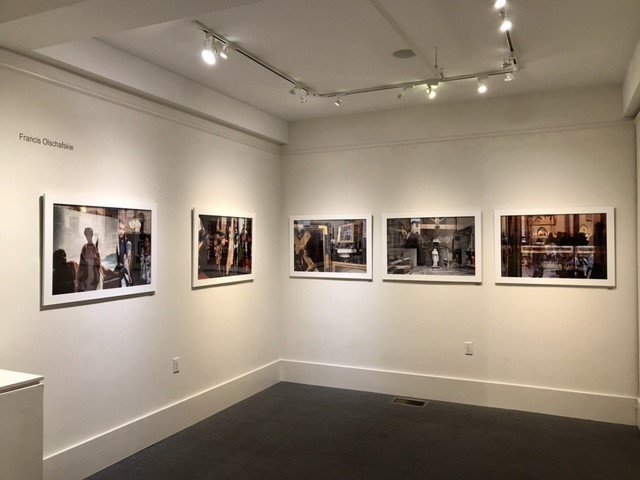 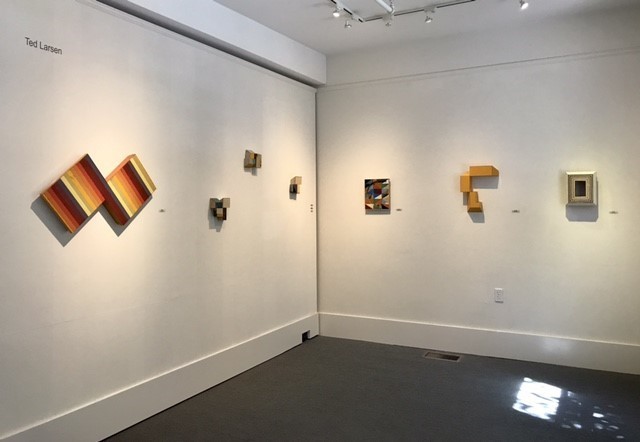 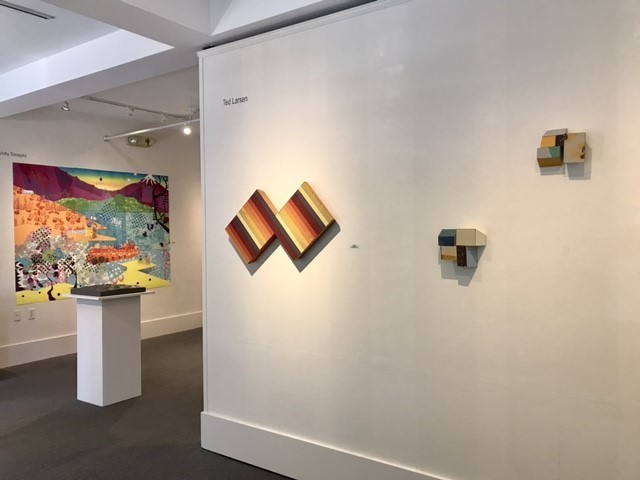 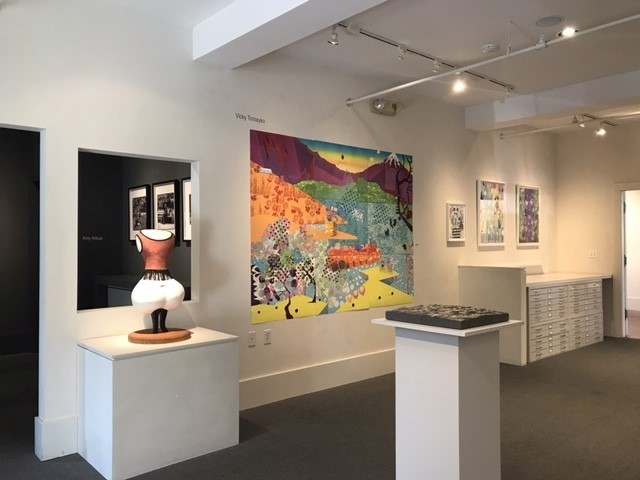 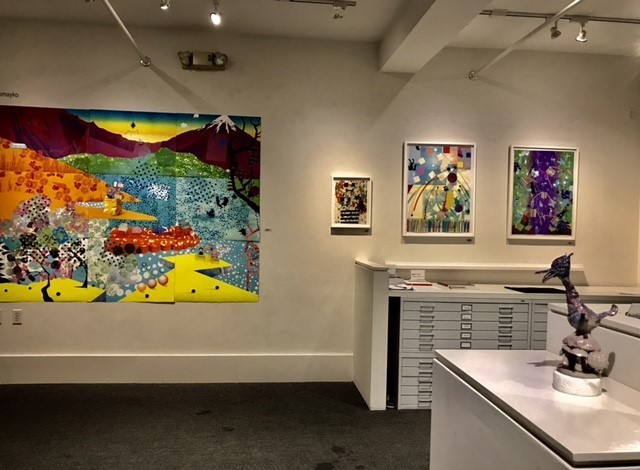 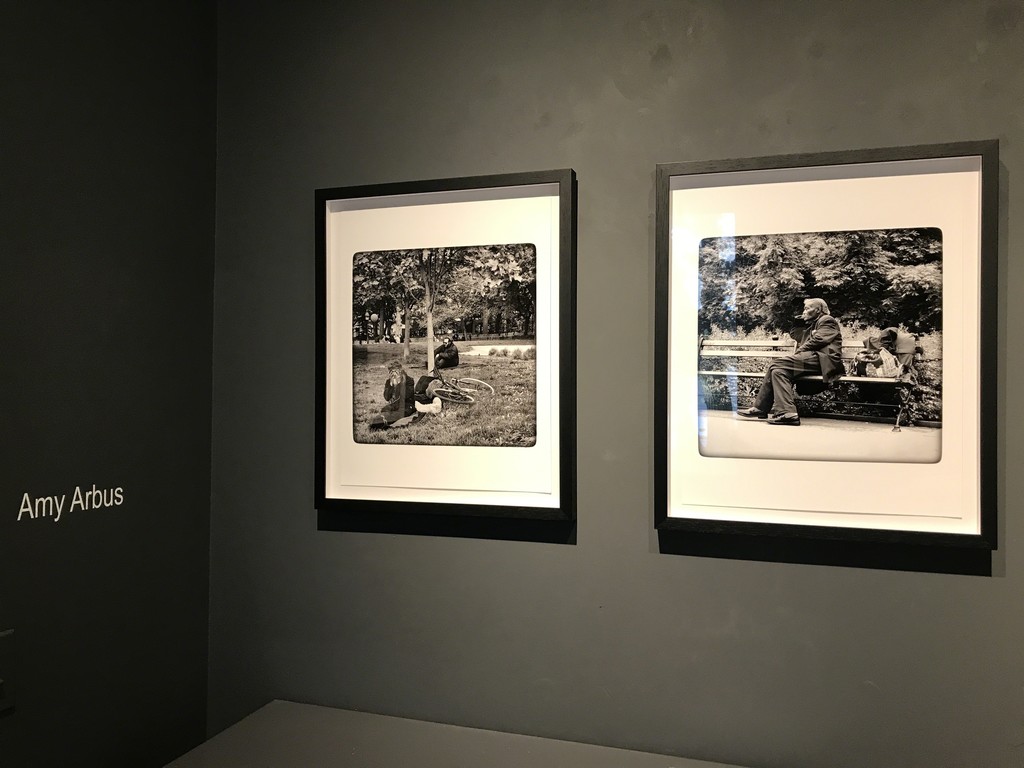 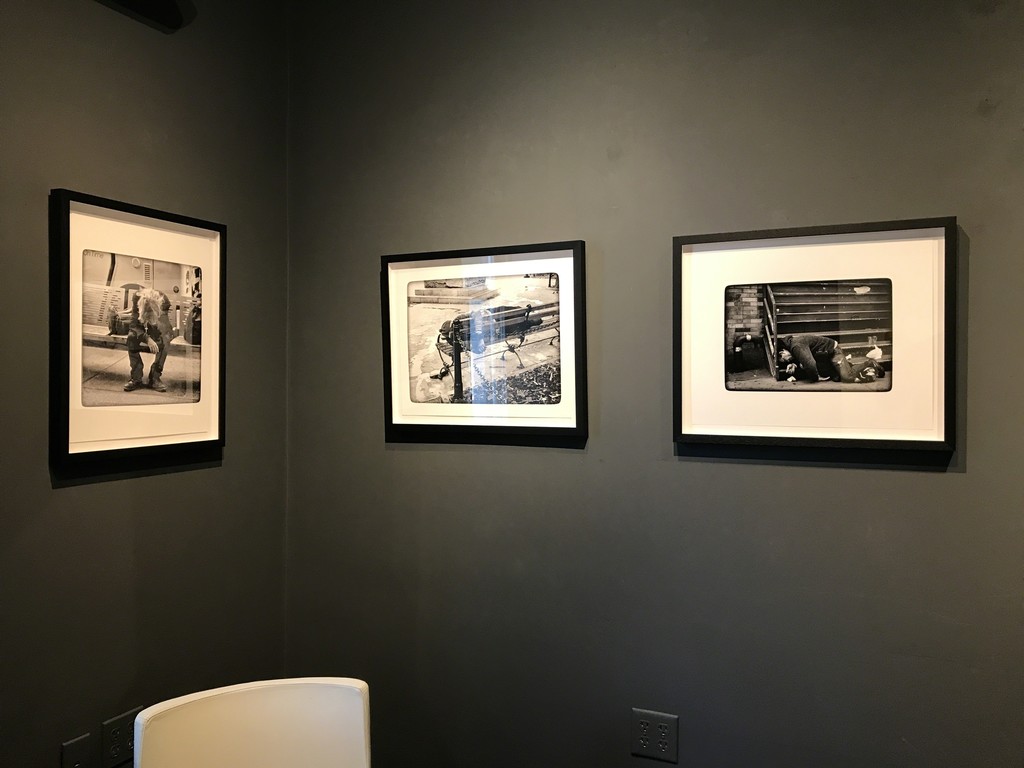 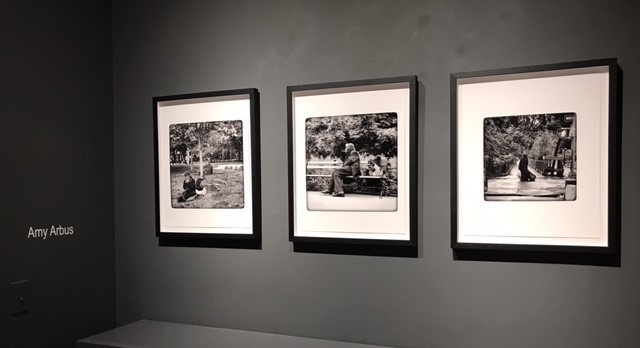 AMY ARBUS presents black and white photographs from a new series titled, ‘The Outsiders’. Taken in and around the parks in her New York City neighborhood these riveting new images capture homeless and disenfranchised people. ‘The Outsiders’ began with photographs of the Women’s March in Washington DC and continues to consider the entirety of the arc of social change happening now. 'The Outsiders' offers the immediacy of the moment documented with the camera while reaching deep into photography’s history and speaking directly to its legacy. As always, Ms. Arbus offers the viewer dazzling technical and formal satisfactions while provoking story, emotion, a sense of time unfolding, and an incomparable relationship between photographer and subject. ‘The Outsiders’ consists of ten new photographs that premier at this exhibit.

The gallery is pleased to present new works from TED LARSEN. Larsen is an internationally exhibiting artist and Pollock-Krasner Foundation recipient with a BA from Northern Arizona University. He exhibits widely throughout the US and comes to us from a sold out solo booth at Volta13 Basel in June.

The work he creates supply commentary on minimalist belief systems and the ultimate importance of High Art practice. Since 2001, Larsen has used alternative and salvage materials in his studio exercises.

Larsen has been featured in Art in American, ArtNews, SouthWest Art, Mountain Living, Architectural Digest, Sculpture Magazine, and Art Gallery International magazines. He has had reviews in The New York Times, The Philadelphia Inquirer, The Denver Post, and The Dallas Morning News amongst others. Larsen’s work appears in the books Art On The Edge, Biennial Southwest, The Curtain of Trees, New American Paintings, and Millennium Collection. Public Broadcasting Service (PBS) produced an interview with Larsen.

FRANCIS OLSCHAFSKIE will present a suite of new color photographs. Olschafskie has been a practicing Artist for over twenty-five years. He has exhibited nationally and internationally, including at the Museum of Modern Art, Paris; the Isentan Museum, Tokyo, the Greek Ministry of Culture, Athens, the Tisch School at NYU, New York, the Robert Hull Fleming Museum in Vermont, and the Photographic Resource Center in Boston. Mr Olschafskie has received numerous Artist in Resident grants and an Artist Fellowship from the Artist Foundation in Boston. Mr Olschafskie has been a faculty member at New York University, the School of Visual Arts, in NYC , The International Center of Photography in NYC, the University of Massachusetts at Amherst and Boston University where he has taught graduate and undergraduate courses in Photography, Art History, Technology History and Computer Imaging. Mr Olschafskie did his graduate work at the Visible Language Workshop at the Massachusetts Institute of Technology, Media Laboratory, and his undergraduate studies in Photography at Massachusetts College of Art.

He has exhibited widely in Provincetown, in the US and globally including shows at Columbia University in New York City, the Center for Book Arts in NYC and at Paris Photo. In 2008 Olschafskie's photographs were placed in the Special Collections of the Bodleian Library at Oxford University in the UK. In France in 2007 Mr Olschafskie was honored at the state of the city address by the mayor of Bry Sur Marne for his work at the Daguerre Association.

We are delighted to continue our work with JEFFERSON HAYMAN. Mr. Hayman will present a new group of original photographs taken by the photographer, produced in his lab and then framed uniquely in his woodshop.

Jefferson Hayman is an artist whose work explores the themes of nostalgia, common symbols, and memory. Through a quiet minimalism and deep ties to the history of the medium, he invites the viewer to partake in the narrative process in a way that is both intimate and deeply personal.

Drawing from his education in the fine arts and his training in the art of frame-making, Hayman approaches his work with a deep understanding of traditional craftsmanship and a sense of artistic heritage whilst remaining tied to the present through the timelessness of aesthetic simplicity. Through an understated language of visual symbols and meditative studies, Hayman's work manifests as a visual journal chronicling transformation, discovery, and solitude, boldly stripped of the extraneous. Each photograph is handcrafted as a silver gelatin, platinum or pigment print, capturing a delicacy in tonality reminiscent of early Pictorial photography as well as the subsequent modernism movement's refined interplay of light and shadow. Finished prints are paired with antique or artist-made frames, meticulously custom-made by the artist, whose attention to the unique attributes of each photograph imbues every piece with a completely unique story and sense of personality.

Hayman's work is found in numerous private and public collections, notably the Museum of Modern Art Library, The Boston Athenaeum, The New York Public Library, the collection of Sir Elton John, and the collection of Robert DeNiro, amongst many others. In 2015 he was awarded the prestigious Pollock Krasner grant. He lives and works in Tappan, New York, a small historic village minutes from the heart of Manhattan.

In 2001, his drawings were selected for the Provincetown Art Association’s Emerging Artists show. In 2002, he showed at the Wing/Pinske Gallery in New Bedford, Massachusetts. He showed at the Battelle/Harding Gallery in Greenfield, Massachusetts and at the Boston Athenaeum in 2003. In November and December 2004, his work was shown at the Jamaica Plain Art Market Gallery in Boston. His figure drawings and white line woodcuts (Provincetown Prints) were featured at the Stonewall Library in Fort Lauderdale in 2010 and three of his abstract paintings were included in a show at the Provincetown Art Association and Museum (PAAM) in 2012. He has exhibited at the Schoolhouse Gallery since 2003.