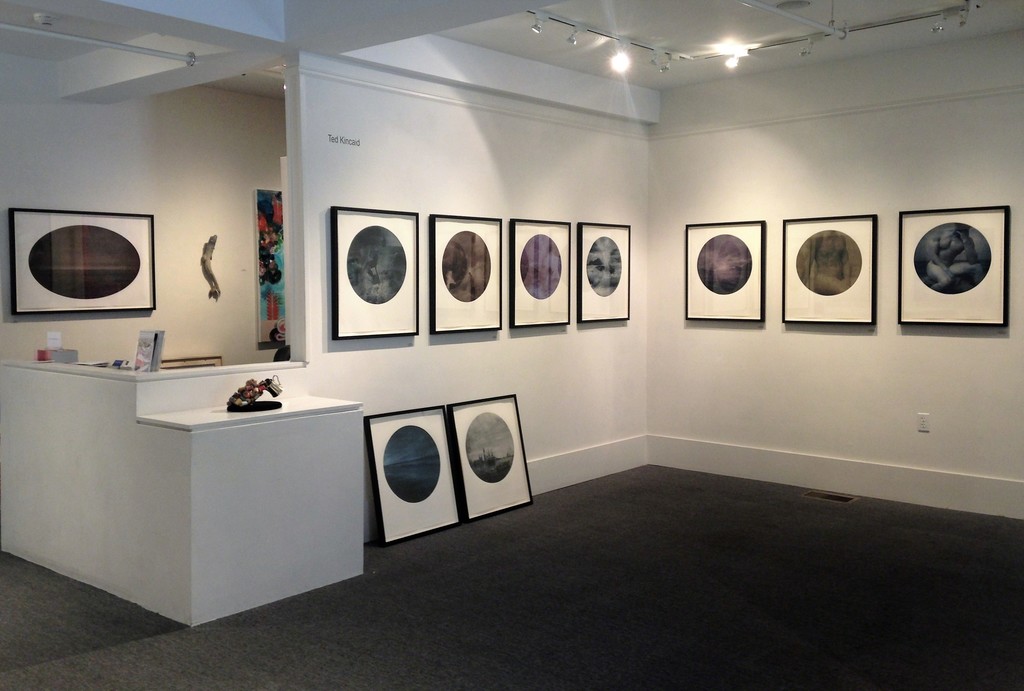 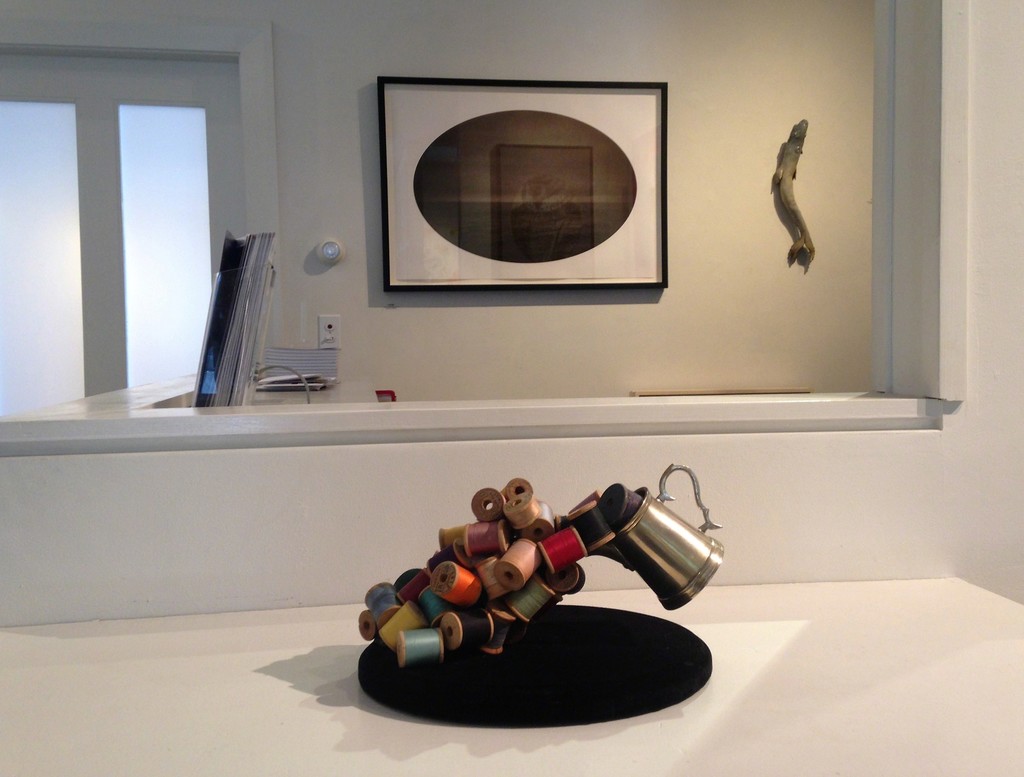 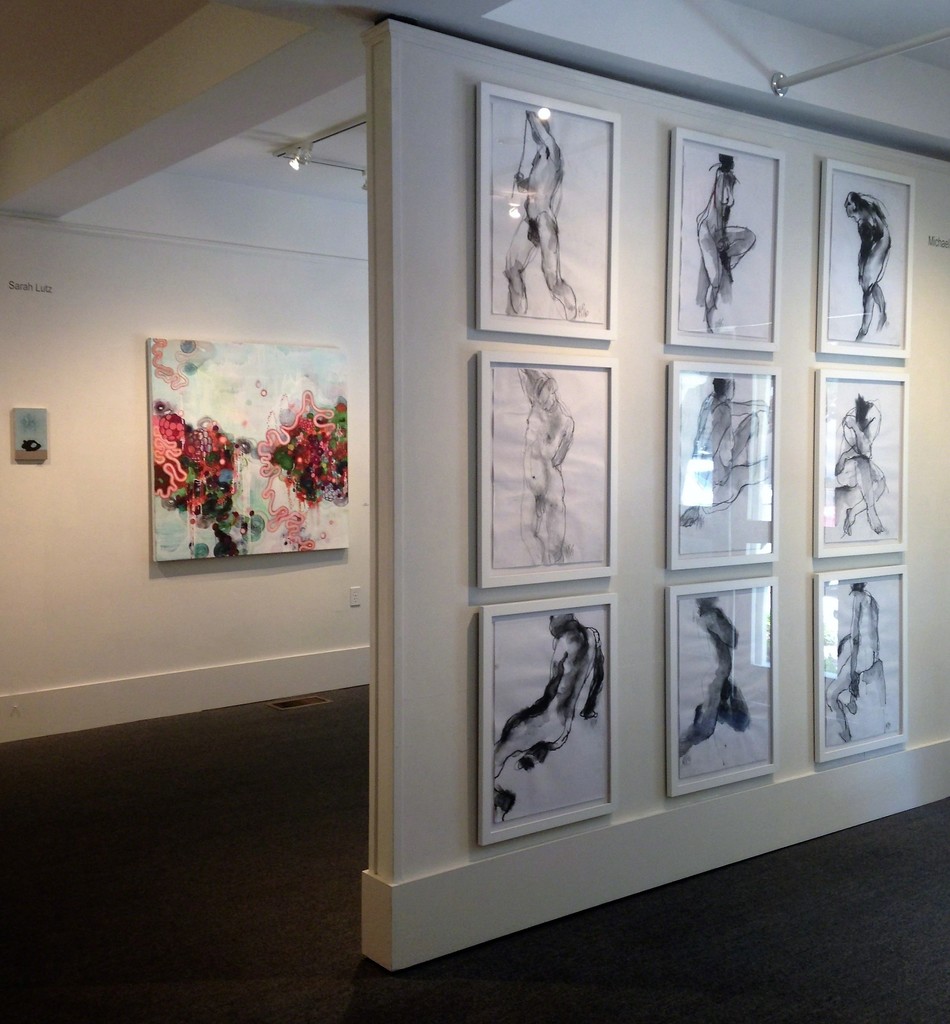 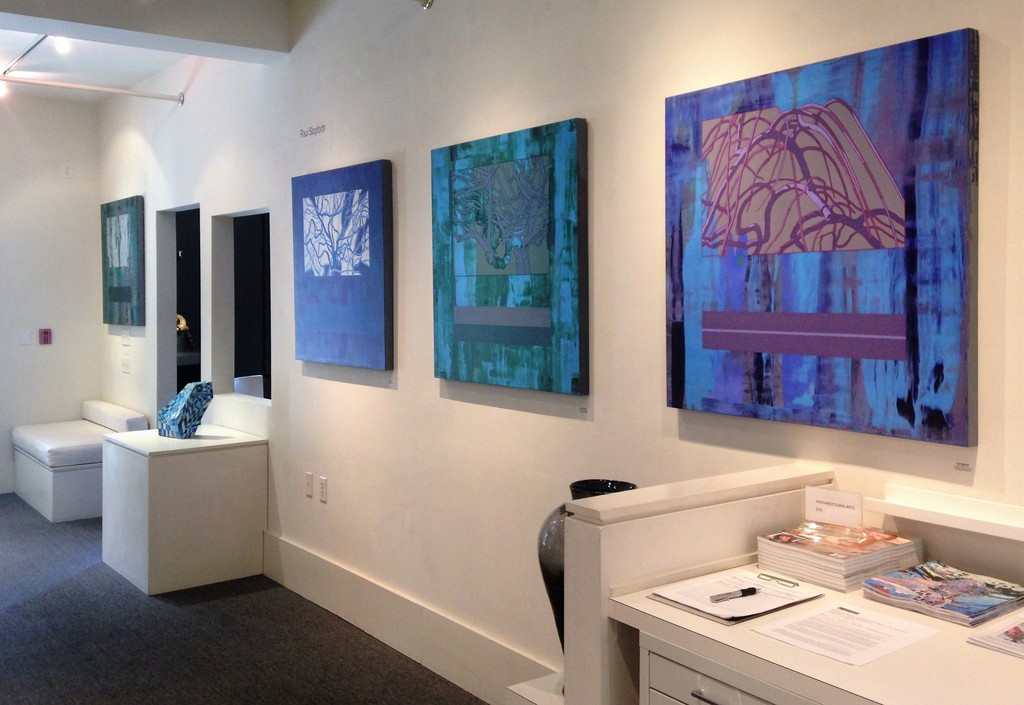 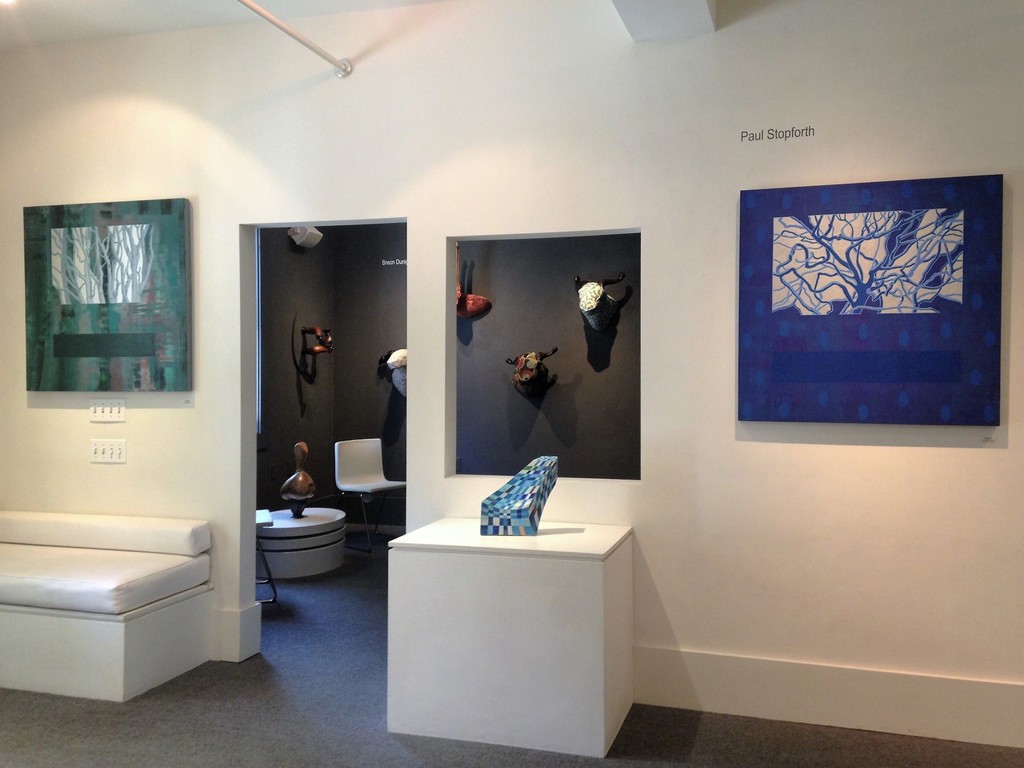 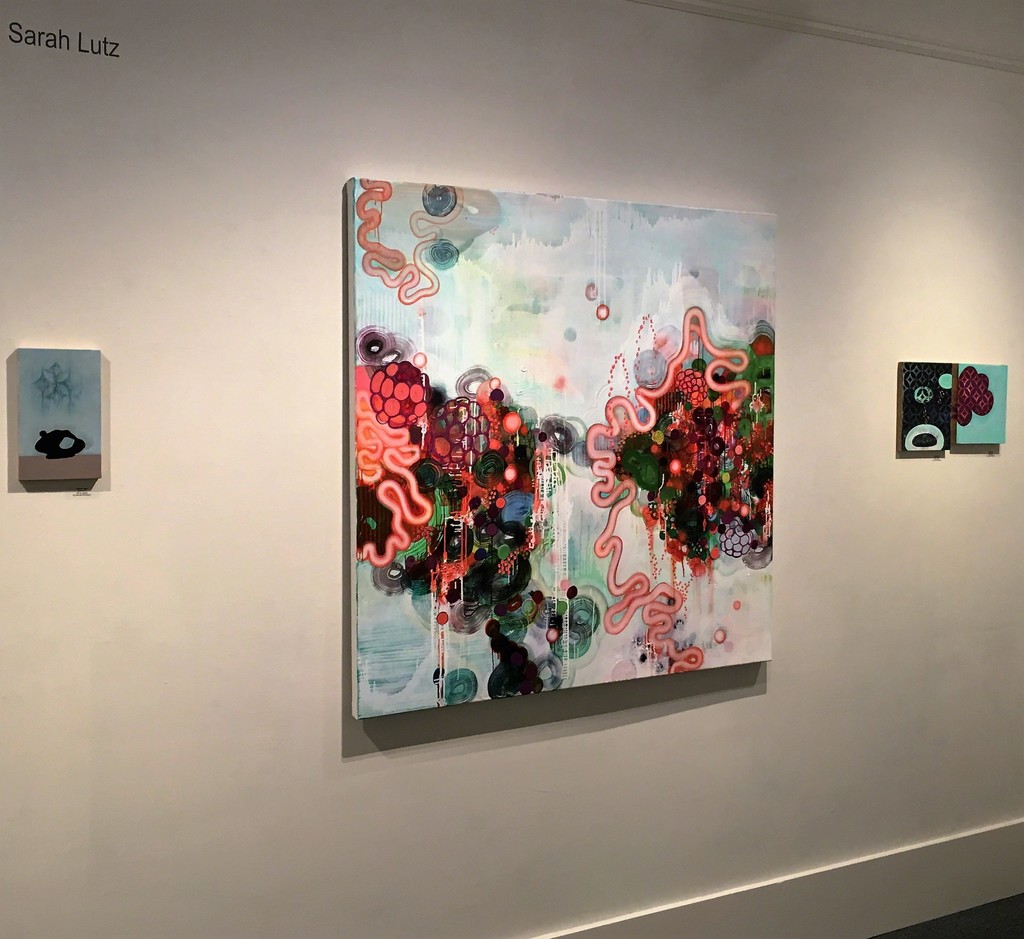 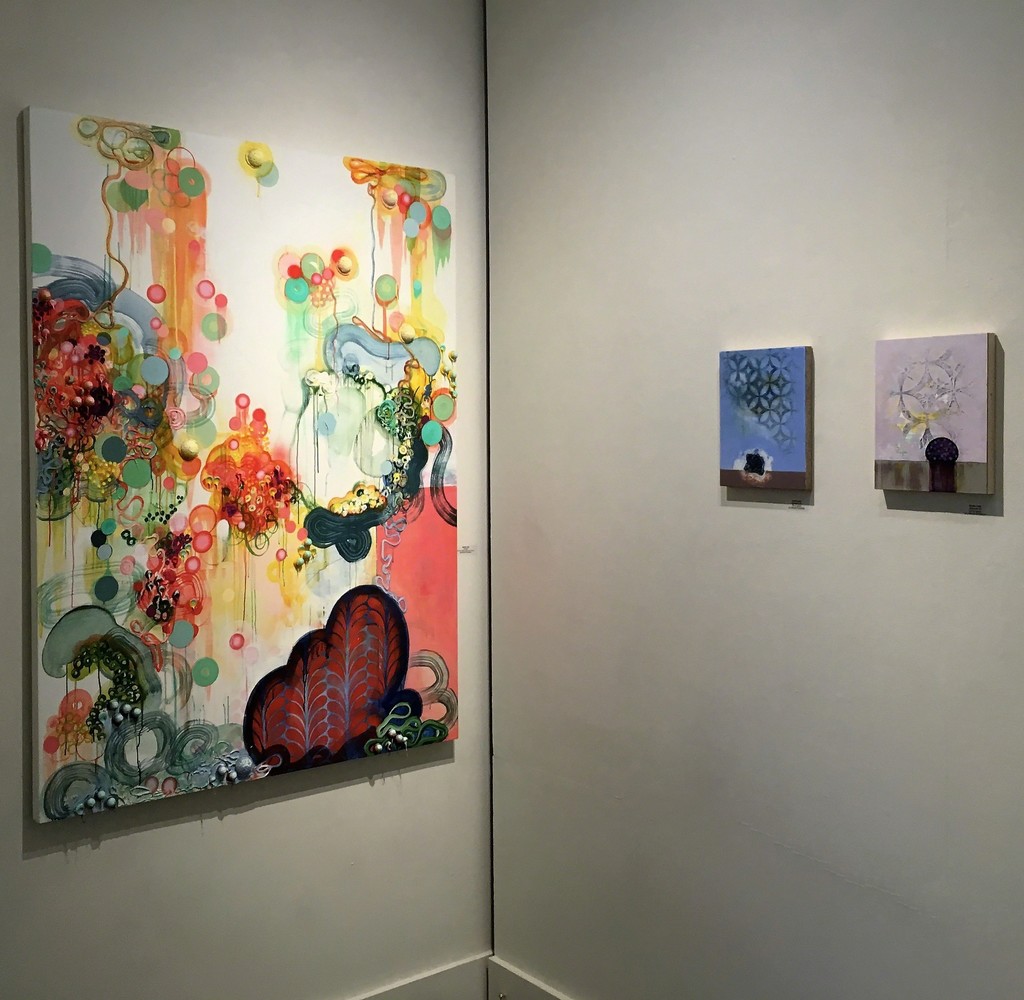 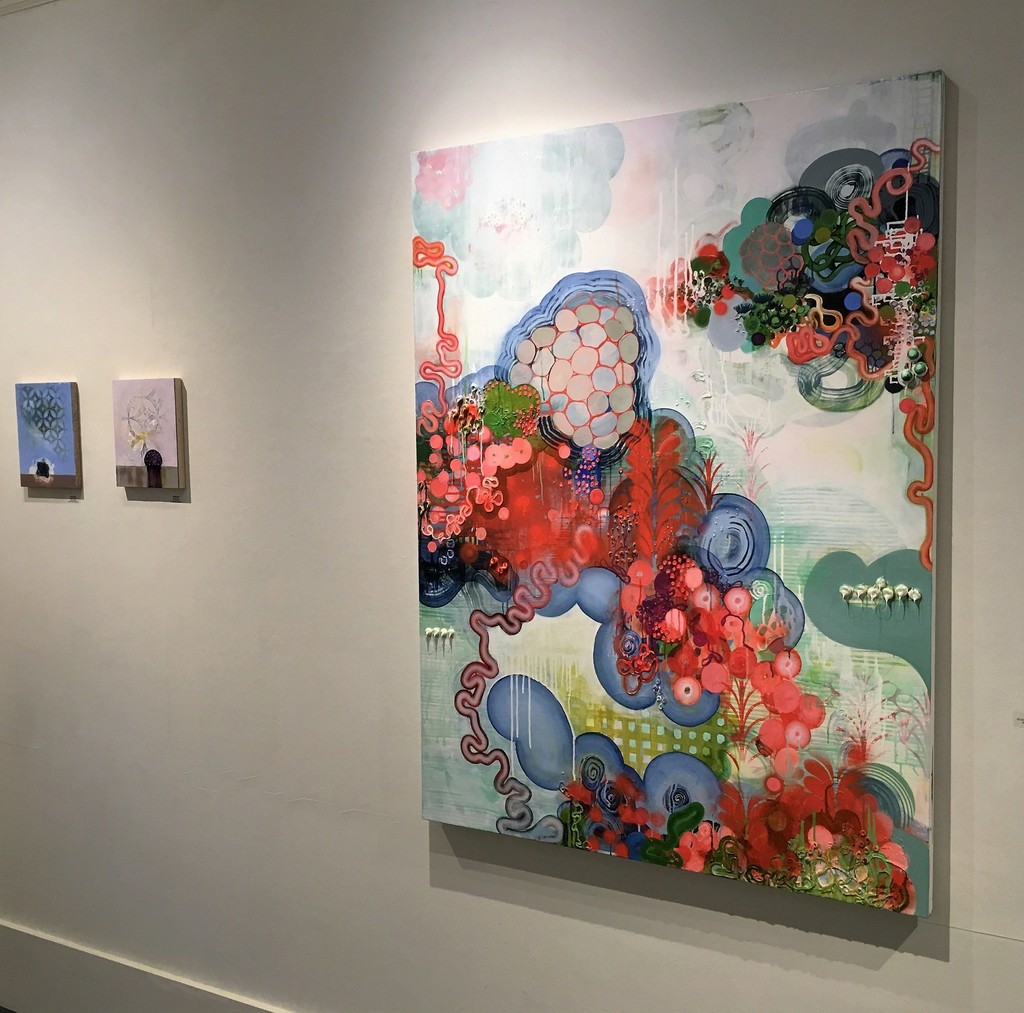 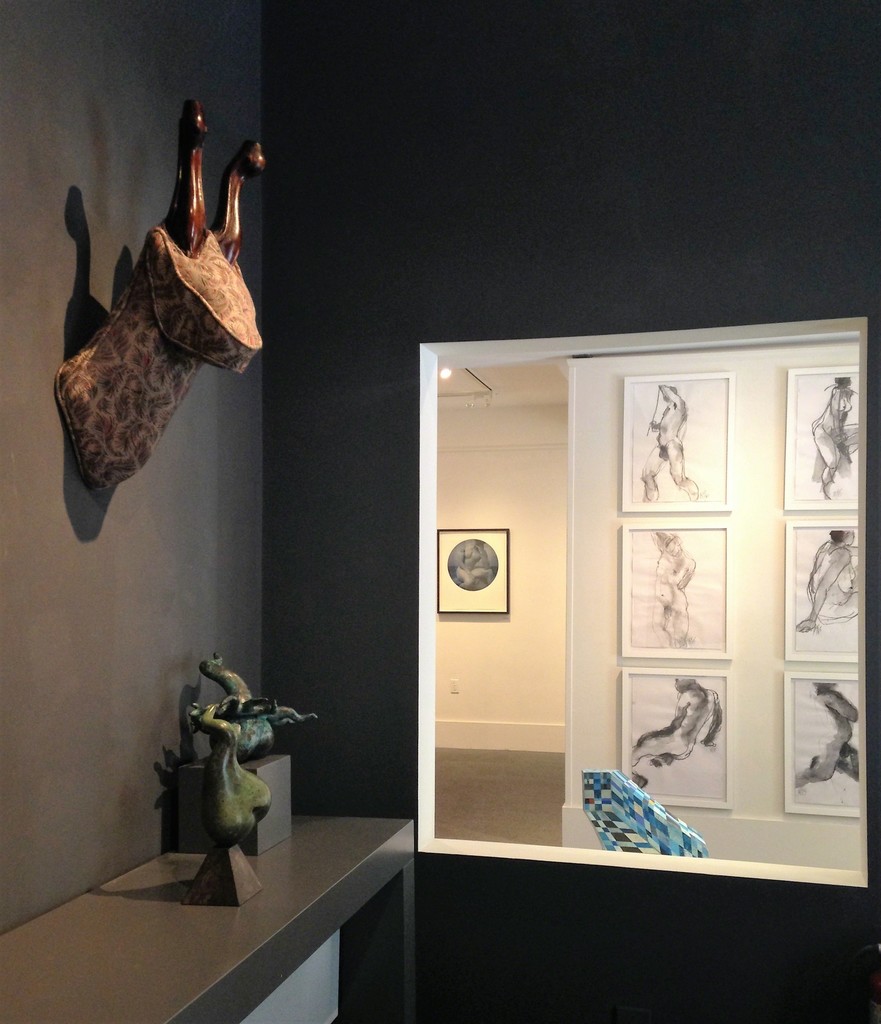 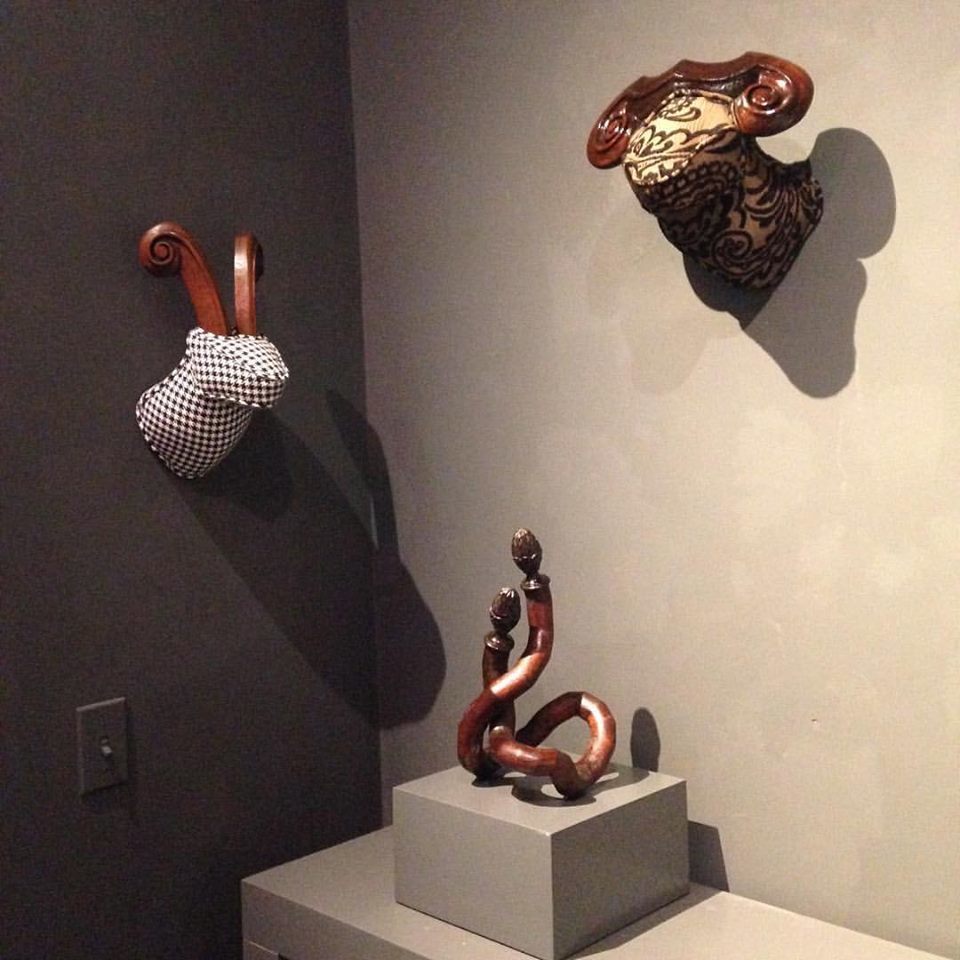 BREON DUNIGAN exhibits her sculpture and prints widely throughout New England and New York. Her studio is in Truro, on Cape Cod and she has deep connections to the Art Colony in Provincetown, Massachusetts. Dunigan’s work can be found is several public and private collections.

For this exhibition we will present new sculpture that further explores her interest in the
the line between the strange and the familiar. The show consists of new dimensional wall and standing works that use interacting shapes, textures, proportions to suggest stories that begin when one of her chosen materials meets another. A scrap of fabric strikes Dunigan with its color and pattern and her eye catches on the particular curve of a table leg, and so an "animal" is born. Her horned “Trophy Heads” describe the tension she enjoys between our preconceptions about beauty in fine art, functionality in the decorative arts, and ways that objects like trophies contain both possibilities. These artworks connect us with our hidden private desires, impulses and satisfactions about collecting including a flirtation with humor and fetish.

Breon Dunigan's wall sculptures of horned trophy heads, made from repurposed furniture and textiles, are something of a centerpiece to this exhibit. A cluster of five heads along one side of the gallery — a rhino, various bovine — the sculptures are a marvel of ingenious fabrication, and a witty commentary on the nature and psychology of what it means to gather trophies in the first place. They're also just fun and a little bit unnerving, which makes them even more fun.

TED KINCAID Ted Kincaid is an American contemporary artist, whose work explores the interpenetration and connections between painting and photography. He exhibits widely and is collected nationally and has been reviewed in ARTFORUM, ARTPAPER and ART ON PAPER. His work is included in the permanent collections of the Dallas Museum of Art, the Museum of Fine Arts in Houston, the Museum of Fine Arts in San Antonio, the Neiman Marcus Collection, American Airlines, the Belo Corporation, the Microsoft Corporation, Pfizer, Inc, Reader’s Digest Corporate Collection, the City of Seattle, Washington, the U.S. State Department and the Human Rights Campaign Headquarters in Washington, DC.

Kincaid’s work has been seen in many gallery exhibitions and is in numerous museum and corporate collections, as well as a number of commissions, including designing the cover for Neiman Marcus’ The Book twice, a large 22-foot mosaic for DFW International Airport’s Terminal D, and a two story mammoth cloud canvas that anchors Dallas’ Omni Convention Center Hotel.

The Permutations of color and image in Ted Kincaid's photogravures raise, and politely refuse to answer, some heavy questions about modernist seriality and the identity of an individual artwork.
Michael Odom / Artforum

For this exhibition we will present a suite of new photographs.

SARAH LUTZ was born in Madison, Wisconsin in 1967 but lived most of her childhood in Vermont and Guatemala. She holds a B.S. in Studio Art from Skidmore College and an M.F.A. from The American University. Her paintings and prints are in the collections of The Tang Museum and the Provincetown Art Association and Museum and have been shown widely, including solo exhibitions at The Schoolhouse Gallery, Provincetown, MA, The Richmond Art Center, Windsor, CT, Brick Walk Books and Fine Art, West Hartford, CT, The Painting Center, New York, Lohin Geduld Gallery, New York, and The Tang Teaching Museum and Art Galleries at Skidmore College. Her prints have been exhibited at the INK Miami Art Fair and the E/AB Fair in New York in 2015. The artist has received fellowships from Dartmouth College, the Vermont Studio Center, and MAPSpace in Port Chester, NY. She has exhibited annually in Provincetown, MA since 2002 where she is represented by The Schoolhouse Gallery. She was the subject of an Artist Profile in Provincetown Arts Magazine in 2015 and had a solo exhibition at Main Window in Dumbo, Brooklyn and the Open Window Project at Lori Bookstein Fine Art in New York. Her work was featured in the recent exhibition Drishti: A Concentrated Gaze and she will be in two major exhibits in New York in 2016/17. She lives and works in New York City and Truro, Massachusetts with her husband and their two daughters.

For this exhibition we will present new paintings that are a further exploration of the exuberant, even opulent environments she paints; worlds where shapes, marks, dimensional applique’s and unidentifiable phenomenon float, drift, land, and rest with of a wide array of deliberately combined colors, textures, patterns and materials. This work integrates synthetic artificial colors with natural, “old painting” hues; hard-edged geometry with organic forms. There are areas of thick impasto alongside thin veils of glaze or even bare linen. Besides many brushes and palette knives she uses scrapping tools, Qtips, squeegees, rollers, squirt bottles, cake decorators, stencils, spray paint, glitter, and paper balls. This consideration of history and the variety of marks and materials make for spaces that are seductive immersive and fantastic and somehow also familiar memories.

Like an elegant guest Sarah’s paintings do not forget the etiquette of their occasion but are definitely the life of the party. Her vibrant colors are joyful and warm, her playful shapes seem to jump out of contemporary urban culture to theatricalize her work’s landscape spaces, riding on light and skimming on her fine drawing skills, they make a flat land of forms on which her patterns and textured surfaces perform. Baroque yet tailored, these paintings are unconventional and utterly convincing.

We are pleased to present new paintings and drawings of the human figure by MICHAEL PRODANOU. Prodanou is a career architect who received his Bachelor of Architecture from the University of Toronto. After having a successful architectural practice in the USA, Europe, and the Mid-east, he has been drawing and painting figures in charcoal and oil since 1998. He has taken workshops with Cynthia Packard, Jim Peters, and Robert Henry in Provincetown Massachusetts at the Fine Arts Work Center. Prodanou is an admirer of the Bay Area figurative painters David Park, Nathan Olivera, Richard Diebenkorn, and Elmer Bischoff. He also admires the work of the German Expressionists, Ernst Ludwig Kirchner and Karl Schmidt-Rottluff.

PAUL STOPFORTH presents a new suite of paintings made with gouache and acrylic on wood. His recent work investigating color led him further into paintings that discuss varied and complex figure/ground relationships suspended in fields of variegated color and ultimately to a search for beauty and mystery which is the purpose of this work.

Originally from South Africa, Stopforth emigrated to the United States twenty-seven years ago where he has since lived, worked and taught in Boston, Cambridge and Provincetown. Throughout his life as an artist Paul Stopforth has created meaning using fragments of the world that reflect larger contexts within which they are found, making paintings and works on paper that continue to demonstrate a willingness to embrace disparate spaces and the objects that inhabit them. From drawings of the hands and feet of martyrs struggling for freedom and dignity in the face of South Africa’s apartheid regime, to painted fragments of landscapes within larger landscapes that embody the histories of individuals and their surrounding communities. He often makes use of 2 or 3 distinct pictorial systems, placing them in shared spaces that create luminous, dynamic and color filled paintings.

Stopforth studied at the Johannesburg School of Art and was awarded British Council Scholarship to attend the Royal College of Art in London; he and his wife Carol made the decision to leave South Africa in 1988, perhaps the bleakest year of the state of emergency period. Over the course of his career, he has held numerous one-person exhibitions both in South Africa and in the U.S.A. and has been the recipient of numerous awards and residencies. Public collections holding his works include the Harvard Film Archive, the Constitutional Court of South Africa, Tufts University Gallery, the National Gallery, Cape Town, the Johannesburg Art Gallery, Durban Art Museum, the Pretoria Art Gallery, and University of the Witwatersrand Art Galleries. Stopforth is especially noted for an important series of drawings based on the death of the Black Consciousness leader Steve Biko. He taught in the Visual and Environmental Studies Department at Harvard for 10 years and at the School of the Museum of Fine Arts in Boston, Massachusetts College of Art & Design and The Fine Arts Work Center.

LEE BROCK is fascinated by the two ways humans use line, shape and color to communicate. One is to build precise, measured alphabets and symbols to codify our verbal languages. The other is the primal, spontaneous use of line, shape and color by artists creating non-objective art. Lee has been exploring this abstract expression for years using many mediums and processes. Currently she is ‘painting’ directly onto a digital tablet with her fingers. An artist who has always worked quickly Lee has found this new media exciting and satisfying. Using digital illustration and digital photography skills from her professional graphic design experience she further enhances and manipulates some of these images.

Lee’s family is from a very small town in Northwest Texas. She was born in Coronado, CA. They traveled the world first courtesy of the U.S. Navy and then an international company. As a teenager she lived in Europe soaking in the history, artwork and the culture through schooling and personal adventures. Upon returning to the US she continued her art education at the California College of Arts and Crafts in Oakland, CA, the University of Texas in Austin and the Art Students’ League in New York City. Since then she has studied independently with a number of artists, museum programs and arts centers, including printmaking and painting at the Provincetown Art Association and Museum, the Truro Center for the Arts at Castle Hill and the Fine Arts Work Center in Provincetown. In 2013 she graduated with high honors from the Broward College Graphic Design Technology program in Fort Lauderdale, taking first place in portfolio presentation. Lee’s work has been shown in museums, art associations and galleries in Provincetown, Fort Lauderdale and Miami.

For this project she will present a suite of abstract images designed to create a feeling of familiarity by using repeating patterns and geometric designs layered over organic shapes full of color with rolling swaths of gestural line. As usual her titles add cultural elements and at times a touch of humor.